Did Kevin From ‘Home Alone’ Grow Up to Be Jigsaw? A Deadly Serious Investigation 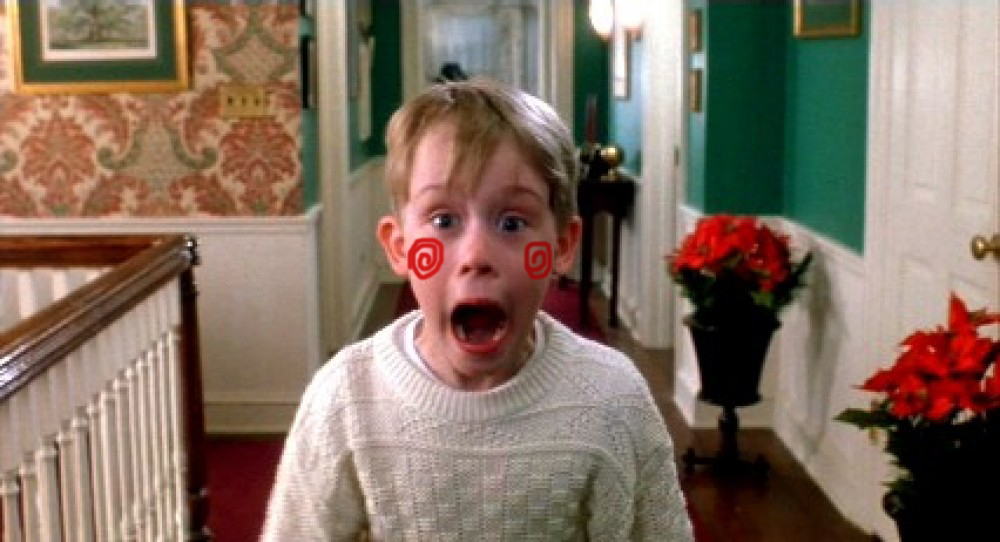 The holiday season is upon us, and you know what that means: rampant consumerism. Hordes of sheeple leaving their families to queue for hours in front of big-box stores across the nation in hopes of scoring cheap electronics without being crushed to death. The dystopian horror of mass transit hubs. The inevitable gaining of 15 to 20 pounds of ham, turkey, and pie weight. And, of course, constant re-airings of holiday entertainment such as Home Alone, Chris Columbus’s 1990 classic about young Kevin McCallister — played by a cherubic Macaulay Culkin — who spends a solitary Christmas in a vast Winnetka mansion after his family, in a rush, accidentally forgets to bring him along on a trip to Paris. As the rich are wont to do, I guess. So much to think about — who can be bothered to remember their own defenseless flesh and blood?

Since it first hit theaters 24 years ago, audiences have been enchanted by Home Alone and its scenes of young Kevin romping through the affluent Chicago suburbs all by his lonesome, accidentally shoplifting from the grocery store, making a pizza boy think he was about to be murdered, and, most famously, defending his home from a pair of bumbling thieves using a series of Rube Goldbergian Roadrunner-vs.-Coyote devices of his own design. From November 1990 to February 1991, Home Alone was the no. 1 film in America, unseating Child’s Play 2, and turning away challenges from such movies as Awakenings, Jean-Claude Van Damme’s Lionheart, the third Godfather movie (which we pretend never happened), Three Men and a Little Lady, and Disney’s1 holiday tentpole The Rescuers Down Under. “Every kid in America wanted to see Home Alone 63 times,” said Wall Street analyst Manny Gerard, in a October 1991 New York Magazine feature about Disney’s then-struggles at the box office.

Home Alone launched young Macaulay Culkin to international hang-out-with–Michael Jackson–level fame. The movie has become so interwoven with Christmastime in Poland that, in 2010, Poles protested when the network that owns the rights to broadcast Home Alone announced it wasn’t going to air it.

Home Alone’s impact on modern holiday culture cannot be overstated. But the movie has another legacy, a hidden legacy. So, do you want to play a game?

I’ve been working on this theory for several years, researching, poring over the film. Now, I can say with certainty that Home Alone is in actuality the origin story of Jigsaw, né John Kramer (obviously an alias), the infamous serial killer and mentor to serial killers from the Saw movie series.

Oh, my god, I just realized Home Alone is the story of how the killer from the Saw movies became what he is.

I can almost feel your incredulous reaction coming through my computer screen from the future reality in which you are reading this.

Just hear me out.

Throughout Home Alone and Home Alone 2: Lost in New York, Kevin displays anger-control issues, a proclivity for violent fantasies, and voyeuristic tendencies, combined with a fetish for recorded video.

• Kevin becomes fascinated with his next-door neighbor, Old Man Marley, after learning that Marley is possibly the serial killer known as the “South Bend Shovel Slayer.” Kevin seems especially obsessed with the idea that Old Man Marley imprisoned and mummified his victims.

• Early on in Home Alone, Kevin comes downstairs to discover that the extended McCallister clan has devoured all the slices of his beloved plain cheese pizza. His older brother, the corpulent bully Buzz, teases him about this, telling Kevin that if he wants some plain cheese pizza, “someone is gonna have to barf it up.” At the same moment, Kevin sees his cousin, the notorious bed-wetter Fuller — with whom Kevin is sharing a bed later that evening — gleefully smirking while filling his feeble bladder with product-placement Pepsi. Kevin reacts by flying into a murderous rage, releasing a guttural scream while tearing into Buzz in a whirlwind of nails and teeth. Buzz easily outweighs Kevin by perhaps 80 pounds, but the force of Kevin’s attack pushes the older boy back against the kitchen counter.

• Kevin eventually orders his very own plain cheese pizza and delights in threatening the pizza boy with death, using snippets of dialogue replayed from a videotape to make the teen believe he’s about to be shot. After the pizza boy flees in fear for his very life, Kevin retrieves the pizza box and creepily hisses, “A lovely cheese pizza just for me.” Kevin would use this technique again to fend off one of the early incursions of thieves Harry and Marv.

• In Home Alone 2, Kevin records a video of his Uncle Frank in the shower, later using the video to frighten hotel workers.

• Kevin experiences frequent realistic visual and auditory hallucinations, seeing the furnace in the basement as a ravenous fiery-mawed monster. This particular symptom of his psychosis would become important to his methodology as the serial killer Jigsaw.

Is this the behavior of a normal child? Perhaps, but when you take into account the similarities between Kevin’s intricate, almost pathologically complicated home-defense mechanisms and Jigsaw’s carefully designed murder-traps, the case for Kevin being young Jigsaw become quite a bit more substantial.

Let us consider Kevin’s metal-mouthed furnace monster hallucination. I contend that this obviously scarring childhood fear would play an influential role in his later work as Jigsaw, and that he would use a similar looking device to torture Amanda in Saw.

It’s notable, I think, that most of Kevin’s home-defense devices are triggered by the victim, just as Jigsaw’s traps are. And from the very beginning, Kevin/Jigsaw has been using fire to dispatch victims. Kevin caused Harry’s hand to be burned when the older man grabbed a white-hot doorknob, and he rigged a blowtorch trap that triggers when Harry opens a door, resulting in the thief’s head being burned down to the skull.

Home Alone or Saw? You be the judge.

Further echoing Kevin’s murderous Home Alone proclivities, there’s Jigsaw’s “flammable jelly” trap, which combines young Kevin’s preoccupation with fire, basements, and, as with ornaments under the window, making people walk on broken glass. In Saw II, Jigsaw used an electrified staircase with blades that slashed at the legs of the SWAT team officers trying to apprehend him. An embryonic version of this trap appears in Home Alone, when Kevin coats the basement stairs with tar and nails, causing Marv to impale his foot.

What at first glance seems like an innocent if mischievous child’s justified defense of life and property is, in actuality, a cold-blooded and repeated attempt at double homicide.

In 2012, Dr. Ryan St. Clair of the Weill Cornell Medical College was asked to assess the injuries incurred by Harry and Marv at the hands of Kevin McCallister and his nefarious Home Alone inventions. What he found was eye-opening, to say the least.

On the iron to the face, suffered by Marv after pulling a lightbulb string:

“Let’s estimate the distance from the first floor to the basement at 15 feet, and assume the steam iron weighs 4 pounds. And note that the iron strikes Marv squarely in the mid-face. This is a serious impact, with enough force to fracture the bones surrounding the eyes. This is also known as a ‘blowout fracture,’ and can lead to serious disfigurement and debilitating double vision if not repaired properly.”

“If this doorknob is glowing visibly red in the dark, it has been heated to about 751 degrees Fahrenheit, and Harry gives it a nice, strong, one- to two-second grip. By comparison, one second of contact with 155 degree water is enough to cause third degree burns. The temperature of that doorknob is not quite hot enough to cause Harry’s hand to burst into flames, but it is not that far off … Assuming Harry doesn’t lose the hand completely, he will almost certainly have other serious complications, including a high risk for infection and ‘contracture’ in which resulting scar tissue seriously limits the flexibility and movement of the hand, rendering it less than 100 percent useful. Kevin has moved from ‘defending his house’ into sheer malice, in my opinion.”

On the blowtorch to the scalp:

“Harry has an interesting reaction to having a lit blowtorch aimed directly at his scalp. Rather than remove himself from danger, he keeps the top of his skull directly in the line of fire for about seven seconds. What was likely a simple second-degree skin burn is now a full thickness burn likely to cause necrosis of the calavarium (skull bone).” That means the skin and bone tissue on Harry’s skull will be so damaged and rotted that his skull bone is essentially dying and will likely require a transplant.

Perhaps — despite the obvious similarities between Kevin and Jigsaw’s M.O.’s, Kevin’s obvious mental instability, his predilection for violence, his hatred of the police, his twisted sense of morality, and his gleeful dispensing of possibly life-ending violence — you still aren’t convinced that Kevin is Jigsaw.

And if that isn’t enough, here’s the last bit of evidence, something I found while scouring the film, frame by frame, for clues. Something that raises the hairs on my neck even now. There, in the scene in which Kevin first discovers he’s home alone, as he wanders downstairs into the basement, right before he first hallucinates the furnace monster that has had such an obvious impact on his psyche, I found it.