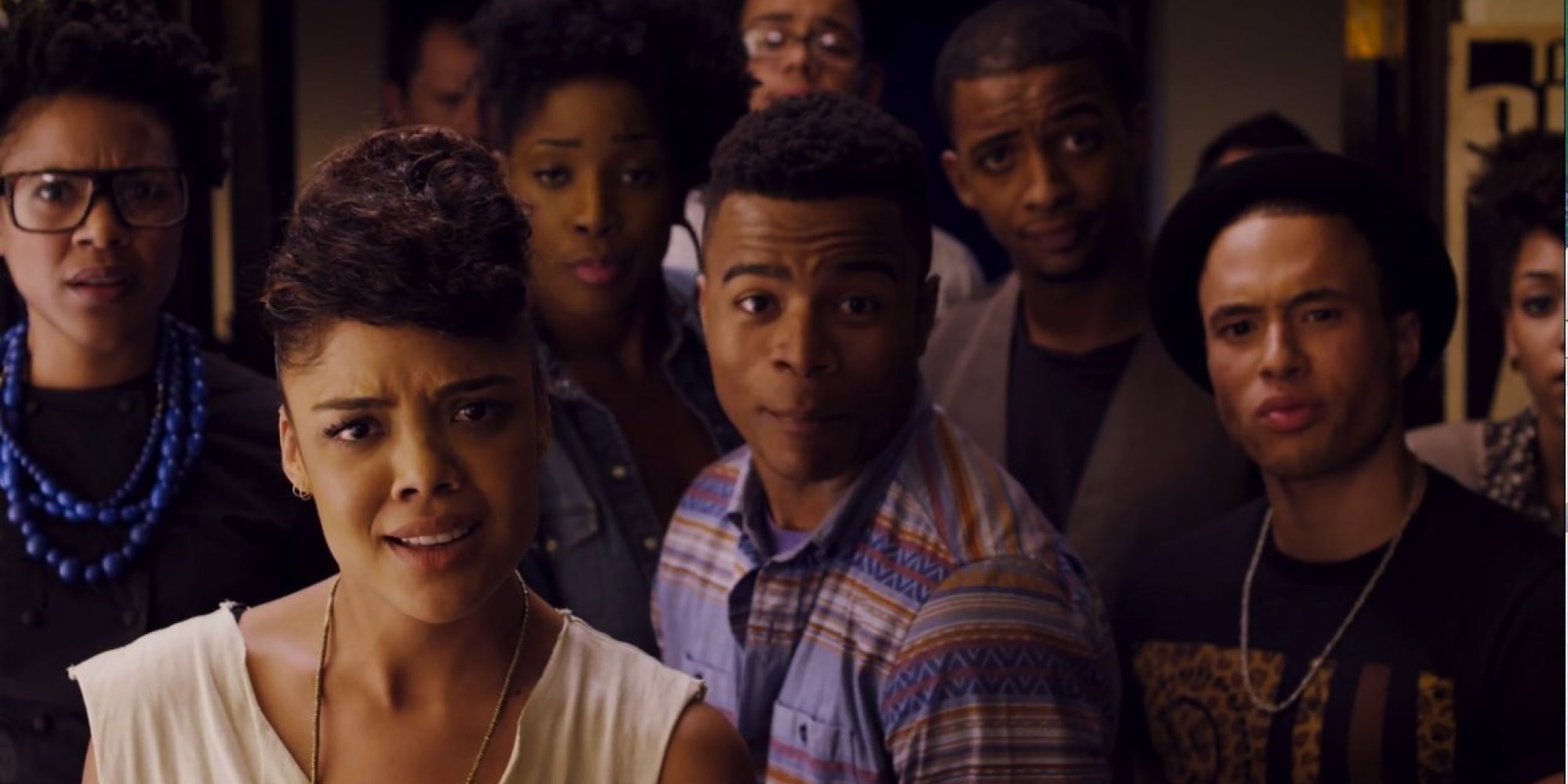 The only thing I was more nervous to see this fall than Black-ish was Dear White People.

When Dear White People made its way into the consciousness in January, I was excited. A movie with a majority black, relatively unknown, non–Tyler Perryed cast, and President David Palmer had made a huge splash at the Sundance Film Festival. And the film’s writer and director, Justin Simien — a black man only a few years my senior — had won the U.S. Dramatic Special Jury Award for Breakthrough Talent.

All I knew about Dear White People was that it focused on a collection of black students at a predominantly white college. And that, in some way, shit went down.

In July, the film’s first official trailer was released.

As soon as one of the characters leaned into her college radio station microphone and said “Dear white people,” followed by a list of things white people need to realize about black people and themselves, I felt an uh-oh in my chest. Because I felt like I knew what was coming. Yet another chapter in one of the Internet’s favorite new trends — using satire to expose white privilege, thus producing white guilt. We’re living in a you know white people, white people be like … renaissance right now. For many minorities, it’s therapeutic and hundreds of years overdue. And if you’re white, and notably critical of your own people, you get it. Or, through a less cynical lens, you’re just embarrassed.

This phase has created an opportunity — finally — to say all those things you’ve wanted to say, loudly and publicly, about white people and their generalized shortcomings. It’s a phase that quickly became a fad, and is now rounding into performance art.

It seemed as if Dear White People was about to be the apex of this trend: every Internet post about the things white people unknowingly do, rolled into one magnum opus Intro to Sociology film.

The subject matter is real, as is the need to gripe. But the timing felt wrong. Just as the idea of satirizing white privilege had reached its carrying capacity, Dear White People was arriving, and I was nervous about it.

For more on being a black face in a white place, subscribe to Dear White People.

Finally, a film that was about to set the record straight about blacks and whites and intermixing. The millennials — watch them go.

I was so worried. All of my Q1 excitement had left my body by Q4. I could easily dismiss Black-ish as just another cutesy family show should it turn out to be a failed attempt to bottle the fictional concept of post-racial America. But Dear White People — this one was personal. This was my story, a story that couldn’t afford to be told poorly. The excitement over black people obtaining the keys to the mainstream will always trigger excitement, but few things are more frustrating than when the wrong people are tossed said keys. And, in turn, those wrong people become the public faces that you didn’t ask for.

From the early looks of Dear White People, this was my generation speaking about its generation. And if it misstepped, well, we were screwed.

Winchester University is the fictional Ivy League setting for this piece of near-historical fiction. Within this college, there’s a black student body and within that, a black student union. There are four main characters and four intertwining story lines: the black male outsider, the black female solely interested in spending time with whites, the princely black alpha male, and the black female radical. If these outlines were left to define the depth assigned to the characters, then Dear White People would have been exactly what I feared: basic. Instead, those four moderately archetypal characters become something else: a nerdy black gay male journalist tormented by whites and unaccepted by blacks; a dark-skinned black female with a stereotypically “black” name who feels the need to hide her shame by showing interest only in white men; a chiseled elite black legacy with a white girlfriend who is also the son of Winchester’s black provost; and an outspoken (and mixed) leader of the black student union who’s secretly sleeping with a white guy.

And it only goes deeper as the film unfolds.

The stories become intertwined, but not in a Crash way. More of a “Y’all are all black in the same ecosystem — of course y’all are going to run into each other and have histories with each other and like and dislike each other but also need each other at times because it’s often hard to be black” kind of way. It’s done naturally, absent the hyperbole you might expect from a satirical dramedy about race and conflict.

In Black-ish, Anthony Anderson’s character makes his son dress in traditional African garb in the backyard of their gigantic home while he explains to him the history of their culture. Yes, that has probably happened to someone. But it doesn’t happen. It’s just a comedic way of framing what the boy said to his father, pre-Africa talk: “Dad, I get it, you feel like I’m turning into a white boy.”

In Dear White People, the scenarios are rarely exaggerated for context or emphasis. Because the racial dynamics on a college campus already have enough complexity and drama. Interracial dating, the connection between mixedness and blackness, the differences in upbringing between African Americans and first- or second-generation blacks, the racial constitution of your friend groups, skin complexion stereotypes, affiliation to campuswide organizations, how one picks his or her Greek letter society, partaking in atypical “black” activities, failing black parents with high expectations by not living out their truths — most of these collegiate realities are either touched upon or attacked head-on in the film. And not obtusely, but honestly — exactly as it is when you’re living that moment, in college, and then for the rest of your life — dealing with the balance of how to exist among all blacks, all whites, a mix of the two, and a mix of all races.

It’s a hard story to tell, because people, and especially artists, are typically worried about offending. They aim to please, and by all means try to avoid being labeled a racist, a race-baiter, or a sellout. There’s this yearning, when discussing race, to be on the right side of history — for protection, inevitably, from those who don’t like what you’re presenting.

I thought a movie like Simien’s would preach to the choir. But the best part about Dear White People is that it’s not about white people. It’s about black people, and being a young black adult, in all its fun, humor, awkwardness, and stress. And with that, also about one of society’s hidden realities — how few experiences are simply just experiences for black people. Running for student council is rarely just running for student council. Picking a social group or fraternity or sorority is rarely just about picking your favorite. Joining a club isn’t just finding something that suits your interests. How you wear your hair isn’t just about what makes you feel most comfortable. What name you use isn’t always about the name you like or the name you were given at birth. Who you date isn’t always just about who you like at that moment.

We want some of those ideals, but it’s nearly impossible to have it all. Because, to most, being carefree and black is still a myth.

The Right Reasons Podcast: 'The Challenge: Battle of the Exes 2' Preview Special