Be Real ‘Black-ish’ for Me: Do We Need a Sitcom About Race? 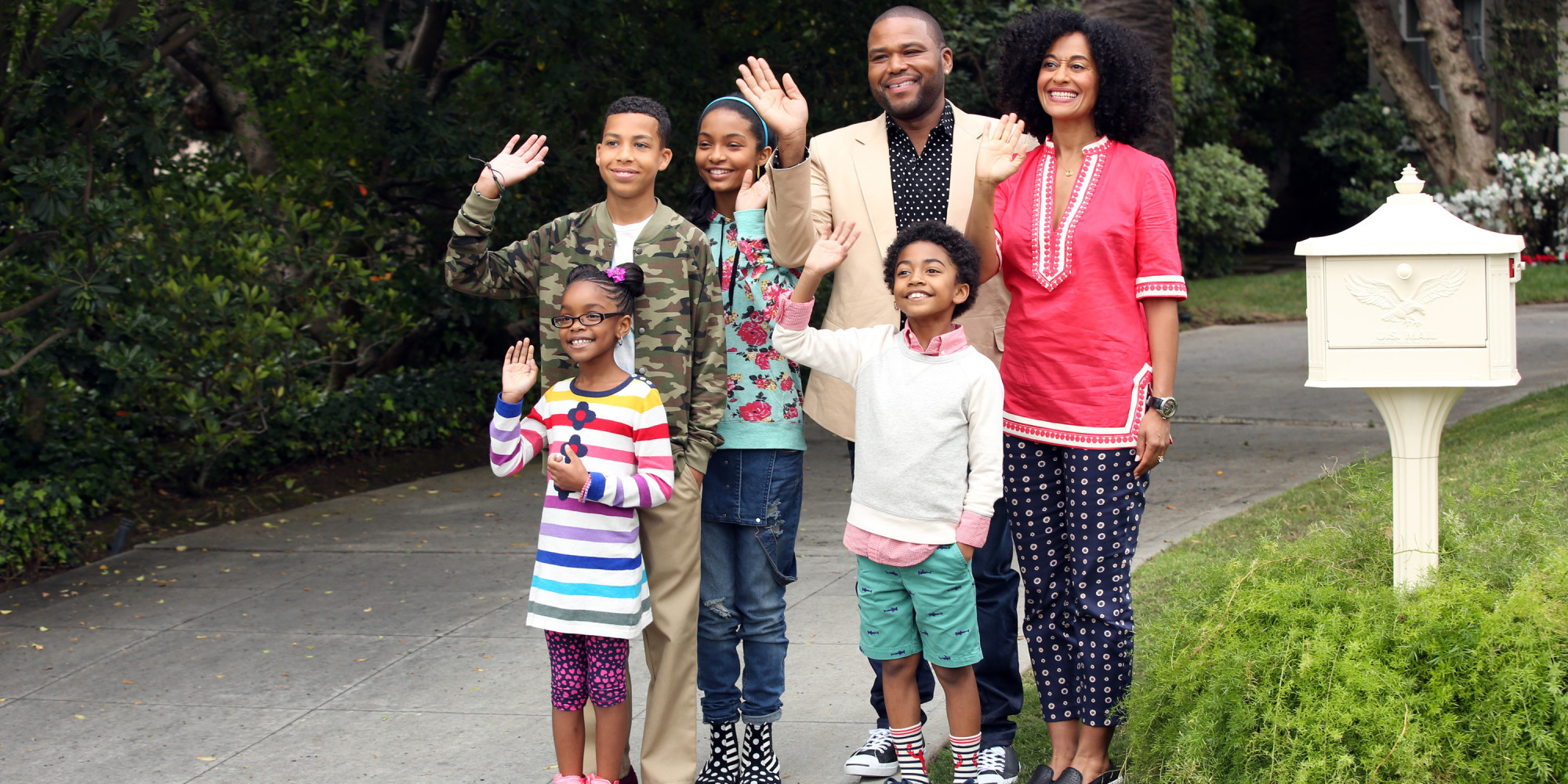 A family had been following me around New York for weeks. On television, alongside buses, in the subway, underground upon leaving the subway: Anthony Anderson, Tracee Ellis Ross, and their brood followed. The seven family members — Anderson, Ross, their four children, and Laurence Fishburne as Anderson’s father — were staring at me, smiling in their Magic Marker Montauk outfits, as I walked into my office in the ABC building on the Upper West Side of New York. I’d grown tired of this family, and I didn’t want to see their show, mainly because it was called Black-ish. And I felt justified in judging a book by its cover, because they named their show Black-ish. And I was completely fine with that.

After the first episode, the critical response was more positive than I expected. And the ratings were surprisingly strong. But I was holding firm: I wasn’t going to watch it. Because the show was called Black-ish. The idea of tuning in felt like giving someone a high-five for accuracy by declaring that President Barack Obama is not black, but Hawaiian. There are so many hours in the day, after all, 100 percent of which I had to spend being black-full. So it seemed silly to partake.

After the second episode, people wrote more things. More positive things. Apparently, Fishburne’s portrayal of an older black man was spot-on and fantastic. Black-ish had succeeded where many others had failed, retaining the Modern Family audience for an extra 30 minutes. I was also told the second episode wasn’t as racial as the first — with the focus being the race-blind world of a boy discovering his penis — perhaps suggesting that Black-ish was getting increasingly black-ish. That seemed like a positive sign, displaying a world in which black families — go figure — experience things that every family experiences. My interest level was rising. But it still felt like a trap.

The day after the third episode, ABC announced it was picking up Black-ish for a full season. That same day, I received a text:

You have to make it to episode three. It actually got good.

I knew that Larry Wilmore (of The Bernie Mac Show and The Daily Show fame) began as Black-ish’s showrunner. Still, I was nervous. Nerves not unlike those I felt when Wilmore announced the name of his upcoming The Colbert Report–replacing show, The Minority Report With Larry Wilmore. But eventually, those nerves turned to excitement. I still wasn’t as confident about Black-ish, if for no other reason than because Wilmore left. But two days after that third episode, I finally caved, watching all three back to back to back.

The overwhelming feeling: pure surprise. Because take that title out of the mix, and it’s a watchable show with fixable flaws.

As any TV critic can tell you, it’s difficult to analyze a series off three episodes, but the highlights and pitfalls reared their heads early on. And both are couched in the new reality about discussions of race, where attempts at subversion are the new let’s discuss this behind closed doors.

Calling a show Black-ish is not subversive. It still is, and will always be, a troll move. But to its trolled credit, the point of the show exists within that title; by way of three generations of black Americans, it shows us how their world is impacted by race right now.

Thus far the focus has been on the three generations of black men, Pops (Fishburne), Dre (Anderson), and Dre’s eldest son, Andre Jr. (Marcus Scribner). Andre Jr. is the son of a black father and a mother who is mixed, black and white. He’s a freshman in high school, meaning he’s at the bottom of the social totem pole. His high school is predominantly white, as are most of his friends. And through a number of scenes in the first three episodes, it’s clear he spends his time thinking about himself as a 13-year-old, and not a black 13-year-old.

This frightens his father. Because his father was raised to think black-first by his black father, who is often disappointed by the job his black son is doing raising a black son. Dre believes he’s failing at parenting a black son, because race isn’t a priority in his son’s life. And ultimately, he’s afraid his son isn’t black enough.

You know, that he’s black-ish.

These scenes are always followed by an internal crisis from Dre, which typically leads to him taking his son to a rec center to play basketball, or dressing him up like it’s Kwanzaa in September, or going on a hunt with Pops to find black kids for Andre Jr. to meet. 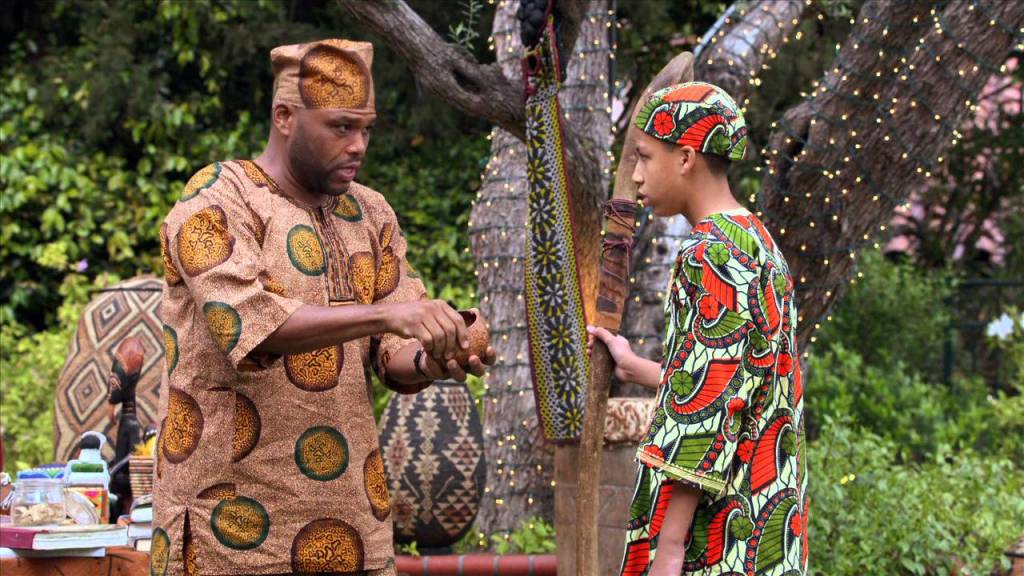 This being a prime-time sitcom on network TV, the way the scenarios are presented often lack nuance and rely on hyperbole. But the origins of these exaggerations are real. And it is important to unpack such things in a space as large and mainstream as prime-time television. Both the parental racial fears and a child’s utter cluelessness are cornerstones in the modern experience of black child rearing and black adolescence. And even touching on such things proves the show is tapping into an atypical part of the racial psyche.

Anyone could write the bit about the “head nod.” Having a let’s-go-to-the-hood-to-play-basketball bit is Chapter 3 of How to Write About Black People for Dummies. Ross saying “If I’m not black, tell that to my hair and ass” is funny, but by now it might as well be a Comic View joke. You need these moments, because it’s a sitcom on ABC. But if “black people doing things in white spaces” is the long-term playbook, instead of the long-term audible, they do run the risk of it all growing stale and predictable and tired by Halloween.

There’s this recurring image I have of Anderson at some point in every episode saying, “Here we go again …” as soon as one of his children or his wife do something that undermines his idea of blackness. An image of Anderson becoming this new-aged, similarly shaped, black Archie Bunker character, watching as he loses his racial grip over his kids, and the world as a whole.

That wouldn’t suit this show well. Luckily, there have been glimpses that they could avoid that trajectory. The glimpses aren’t perfect, but they’re promising.

There’s an overall feeling that Dre, race-focused black parent, is learning to deal with his issues through the act of raising his son. The bar mitzvah episode ends in his family throwing Andre Jr. a massive 13th birthday party, and Dre partially accepting that his son will never excel at basketball. Dre watches as his seemingly failed experiment to find Andre Jr. a black friend ultimately results in a true bond with a black boy who’s just as nerdy as he is. Compromise is a very real thing in this show. And it shows the line black parents are forced to walk if their children live in mixed spaces: keeping them pure but not leaving them hopelessly naive.

It’s not perfect. Through three episodes, Dre is doing all of the learning. He’s the one having racial epiphanies left and right. He’s the one, initially upset about having been promoted to senior vice-president of the urban division, who is now learning to take pride in that post. The wonder is if the show will ever make the detour and let Dre be right sometimes.Will they let him go on a tirade about blackness in a moment when his son needs that tirade? That path is not as family-friendly sitcom-y, and perhaps not very black-ish. But it’s real.

On too many occasions, clever jokes are overexplained and blackishly diluted for the sake of a prime-time audience. Thankfully, even a show titled Black-ish has given itself some room to breathe and move in new directions. And sometimes, it nails it.

There was a T.D. Jakes reference in the third episode. It was completely offhand, but it stood out. Because they didn’t make the joke, and then say, “T.D. Jakes, by the way, is a minister …” They just made the joke and if you got it, you got it. And if you didn’t, your loss.

That’s what Black-ish needs more of. But it’s a process to juggle the black, the -ish, and the none of the above. The foundation is there, the traps can be avoided, and the glaring issues can be fixed. Well, everything but the name.

The Shonda Rhimes Revolution: Finishing What ‘The Sopranos’ Started