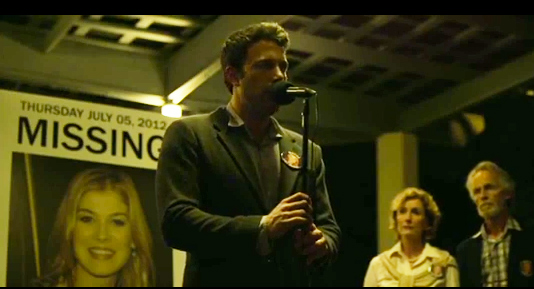 All the reporters on the David Fincher beat had their work cut out for them yesterday. First, the bad news: Fincher, who was in negotiations to direct Sony’s Steve Jobs biopic, reportedly hit a rough patch in his discussions with the studio after demanding $10 million up front and full marketing control of the film. (The sticking point, according to The Hollywood Reporter, was his “ridiculous” price tag in the wake of Sony’s new policy of adopting a more responsible budget following 2013’s spendy and unrewarding summer.) Even for those of us not champing at the bit for another Jobs production (the glue that hangs this on my bedroom wall hasn’t even dried yet), this was disappointing news — the project would have reunited Fincher with The Social Network’s Scott Rudin and Aaron Sorkin, with Fincher pushing for Christian Bale to play Jobs. All is not lost, however, because (as Mashable points out) Fincher and Sony had yet to put pen to paper on the deal, and there’s still room for the negotiations to swing back in the director’s favor.

It’s those evil April eclipses! And there was good news on the Fincher front, too, in the form of an ominous new poster for Fincher’s Gone Girl, as well as the October release’s first trailer:

Set to the spooky strains of the infinitely covered (Elvis Costello, Bryan Ferry, Toto’s Joseph Williams) “She,” performed here by the Psychedelic Furs’ Richard Butler, the trailer features Ben Affleck as Nick Dunne, half of an unhappily married couple — to put it mildly — who becomes a suspect (and the center of a media frenzy) after his wife, Amy (Rosamund Pike), disappears on the fifth anniversary of their wedding. In Gillian Flynn’s novel of the same name, the narration splits between Nick and Amy, neither of whom could easily be termed “likable,” providing the murky psychology that makes for ideal Fincher-bait. The film’s conclusion has been rewritten by Flynn to differ from the book’s, which is probably a wise decision for any thriller writer to make when your third-act plot twists have already been read by more than two million people.

Besides enough brooding Affleck shots to sustain you for the next two years, the trailer features some of my favorite tools of suspense: broken coffee tables (see: Mommie Dearest), bathtubs, wall-unit air conditioners (so underused!), underpants held up by tweezers, and a corpse (or is it…?) looking like the pale, wet subject of an Annie Leibovitz spread.

It’s not as if Fincher needed to remind you he’s the man, but it certainly can’t hurt to release a dazzling trailer the same day the public hears you’ve been denied your $10 million request. It was probably an accident, but there might be some way to pin this on the blood moon. That just depends on how closely you read your Finchercast.