Every Tuesday, Grantland’s Maester netw3rk, our resident expert in Game of Thrones lore (i.e., he’s “read the books”), will seek to answer lingering questions, untangle knotty backstories, and generally shine the light of Knowledge into Westeros’s darker corners. This week: succession plans, suspects, and bastards. These learning sessions will be spoiler-free.

Maester’s note: I once wrote, and continue to believe, that Game of Thrones the television show is the best delivery system for the core A Song of Ice and Fire narrative. You do sacrifice quite a bit of the forest, of course, but gain a kind of guided tour of the most horrible and relevant trees. Case in point: the sumptuous scenes of a stricken Joffrey Baratheon, King of the Andals and the First Men, Lord of the Seven Kingdoms, Protector of the Realm, his cheeks taking on the look of a skinned knee, bloody effluent burbling out his vile face-holes, making sounds in his throat and chest like a man trying to suck a canned ham through a straw. I thoroughly enjoyed it. In the books, the Purple Wedding follows only nine chapters after the Red Wedding, and I was still in such a state of shock from the first thing that I really couldn’t appreciate the second. Ten months, it seems, is just the right interval. 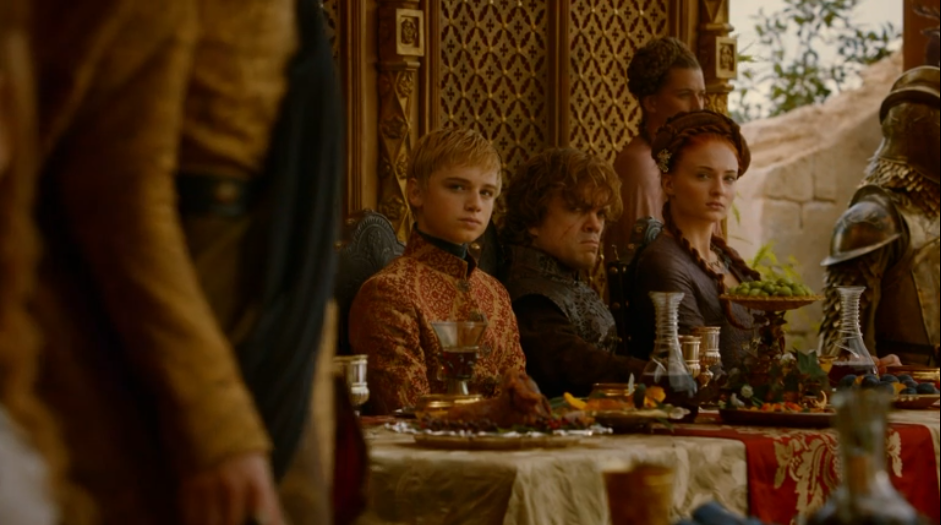 So, who is the King now?

That would be Joffrey’s younger brother-in-incest Tommen. We last saw Tommen during the “Blackwater” episode of Season 2 when Cersei came thiiiiiis close to poisoning the lad in order to spare him from whatever awful fate awaited him should Stannis’s troops take the city. After all, if there’s anything the Lannisters know, it’s how royal children are treated during a sack. He did not appear in Season 3 and is now being played by a different actor, Dean Charles-Chapman. Charles-Chapman also played Martyn Lannister, one of the two young hostages killed by Robb Stark’s mutinous Karstark contingent in Season 3. Just, you know, to keep things super-confusing, I guess. 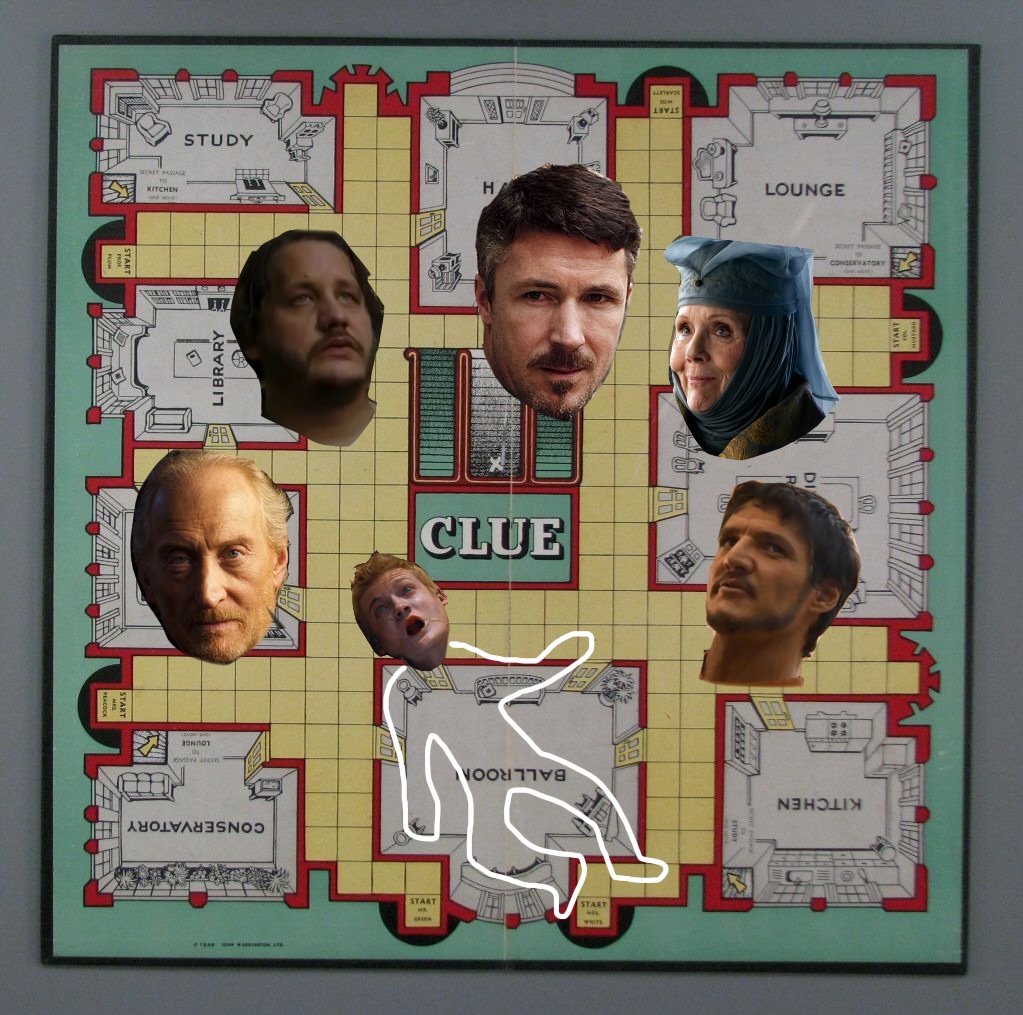 In lieu of a direct answer (which, c’mon), please indulge me as I make my best case for why every possible suspect could’ve done it.

Answers to your burning Game of Thrones questions.
Lord Tywin: Wait! [Grabs your arm as you try to escape from an obvious madman.] Think about it: Tywin had already complained to Cersei about her lack of control over Joffrey, and how that lack of a firm hand on King Crossbow’s shoulder led directly to the War of the Five Kings when Joff, in a fit of pique, had Ned’s head cut off. After Cersei whined that she’d like to see Lord Tywin stop Joffrey from doing what he likes, Tywin, oozing confidence, crooned “I will.” Curious, then, that he made no move to halt Joffrey’s unhinged breach of marital protocol as the brat poured wine over the head of his own uncle/Master of Coin, insulted three-quarters of the attending Westerosi nobility with his dwarf joust, and displayed the fault lines within the Lannister family to every major house in the realm. Westerosi TMZ would’ve had a field day with this. With Joffrey dead, power passes to the younger, more malleable Tommen, who would probably be quite happy to have granddad run the kingdom whilst he spends his time playing with his cats. Framing Tyrion — who has just been found to have broken Tywin’s “no more whores” edict, and who Tywin blames for the death of his wife — for the regicide is just a bonus.

Littlefinger: Littlefinger once told Varys that “chaos is a ladder.” What could be more chaos causing than having the physical embodiment of the state murdered at his own wedding, frustrating the ambitions of the two most powerful houses in the realm, the Tyrells and Lannisters? Not to mention ruining a perfectly good giant pie.

Prince Oberyn Martell: He takes his nickname from a venomous snake and has not been shy about telling everyone he meets that he’s in King’s Landing specifically to settle old scores with Lannisters. (OK, and to fuck everything not nailed down.) Yes, he seems to be quite an obvious suspect, but if he’s caught, the Martells have Princess Myrcella Baratheon in their custody back in Dorne to use as a bargaining chip.

Lady Olenna/the Tyrells in general: Last season, the Queen of Thorns showed herself to be quite interested in Joffrey’s proclivities, questioning Sansa Stark as to just what kind of person the King was. “He’s a monster,” was Sansa’s answer. Perhaps Lady Olenna found the prospect of having both Loras and Margaery wedded to blond psychopaths a bit too risky, and, gambling that the Lannisters need the Tyrells more than the Tyrells need the Lannisters, calculated that Margaery could still be in play for Tommen should, oh, I don’t know, something happen to Joffrey. Also, she was sitting pretty close to the (alleged) murder cup, it must be said.

Ser Dontos: To repay her for saving his life, Dontos spirits Sansa away in the post-murder confusion, after all. He was nowhere near the King’s cup, but perhaps he was close to that monstrous pie. I mean, who wasn’t. Which brings us to….

Who is this Ser Dontos fellow? 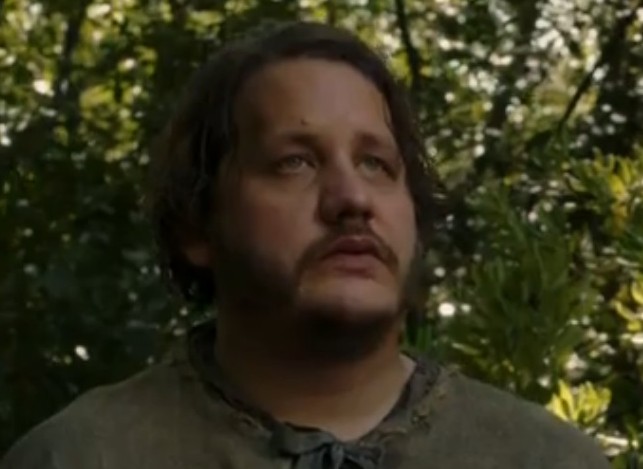 Ser Dontos is an alcoholic former knight turned personal jester of (the late) King Joffrey. We first met him in the premiere of Season 2, as he attempts to take part in the gladiatorial bouts that were part of the celebrations to mark Joffrey’s nameday. He shows up to his scheduled duel sloppy drunk and disheveled, angering King Joffrey, which is a thing that has ended well precisely never. Joffrey, taking his cue from Brewster’s Millions and campus rush week, decided to teach Ser Dontos a lesson by forcing him to shotgun wine until he presumably expired. Sansa, showing herself more adept at playing the game of thrones than we perhaps give her credit for, managed to save Ser Dontos by telling Joffrey that murdering people on your nameday is bad luck. This put Ser Dontos in Sansa’s debt.

Sorry for the lack of a concrete answer, but, believe me, it’s more fun this way. Besides, with all the deaths and betrayals and castrations, there are mysteries that, I’m sure, you’ve simply forgotten about. Who killed Jon Arryn way back in Season 1, for instance …

What’s this Iron Bank that Lady Olenna mentioned in her walk and chat with Lord Tywin?

The Song of Ice and Fire books are often described as being “gritty” and “realistic,” at least as far as the fantasy genre is concerned. For instance, we never get an idea of what Aragorn’s foreign policy toward the Orcs might be like once the war is over, or how the Hobbit economy is structured, or whether Hogwarts had tax-exempt status. But wars must be paid for in George R.R. Martin’s stories, with lives and coin. There will always be more soldiers; the money, however, is much trickier. Enter the Iron Bank, located in the Free City of Braavos, the richest and most powerful of the city-states of the eastern continent of Essos. Braavos, founded by refugees from the interior of Essos 500 years before Aegon’s landing, is located on the northwest tip of the continent in a vast lagoon. A city built on islands in a lagoon, founded by people fleeing wars, which eventually grows into an economic powerhouse with a strong banking sector? Think medieval Venice.

We first hear of the Iron Bank in Season 3, when Tyrion — getting up to speed on his new position as Master of Coin — discovers that previous MoC Littlefinger had been funding the kingdom, in part, by borrowing tens of millions of gold dragons from the Iron Bank. Well, OK, you might be saying, but so what? Westeros is across the sea and has hundreds of thousands of men at arms. Why not just stiff them? Because the Iron Bank’s version of putting you in collections is to fund your enemies, a thing the Lannisters have no shortage of. A few million gold dragons to the Tyrells, or Stannis Baratheon, or the Martells, bidding them to march on King’s Landing and take the throne, might sound like a pretty sweet deal, especially with the King just recently dropping dead in a pool of saliva and pigeon pie.

Trey asks, “Can you give a rundown of the name of bastards in different regions of Westeros?”

Real talk, I had to look up three of these.

Juliet from NBA After Dark asks, “What are Dorne and Highgarden like? What European countries would be best suited for filming there, should the plot point arise?”

I described Dorne last week as being like a combination of Andalucia and Afghanistan. I think Turkey would stand in nicely for Dorne. Highgarden is described in the books as a rich agricultural region, abundant in flowers, melons, and fruits. Tuscany, perhaps.

Peter asks, “What’s going on with Bran? I watched his visions multiple times and still have no idea what’s going on. Can I simply ignore Bran, or is there anything that I should be taking from this?”

This is complicated. I can’t really talk about where that story line is going, but hopefully some background can provide some perspective on Bran’s super-emo camping trip with the wonder twins and DJ Hodor.

The crucial detail of Bran’s arc is warging. Wargs, as we have learned, are people born with the mysterious ability to send their consciousnesses into animals, to see through their eyes, and to control their actions. Now, consider the Stark children and their special bond with the orphaned direwolf pups they found in Season 1. Perhaps all the Stark kids have something of the warg about them, but they just don’t know it.

Which brings us to Bran. Bran is only just coming into an awareness of his talent, but he is already powerful, capable of taking over other human beings, a thing that Osha the Wildling says should not be possible. In the books, warging into another person is painted more as a thing that should not be done, rather than a thing that can’t be done. A notable change, I think, as this means that show Bran is basically the strongest warg anyone has ever known. The question then becomes, well, what don’t people know?

That every example of warging we’ve seen is related to people of the North and beyond is notable, I think. Northerners and Wildlings are direct descendants of the first human inhabitants of Westeros, the so-called First Men. The First Men worshiped the Old Gods, represented by the ghostly faces carved into the milky white bark of the weirwood trees by hands unknown. What, exactly, the connection is between warging, weirwood trees, and Bran’s visions, if any, is something we may eventually find out. Hang in there. 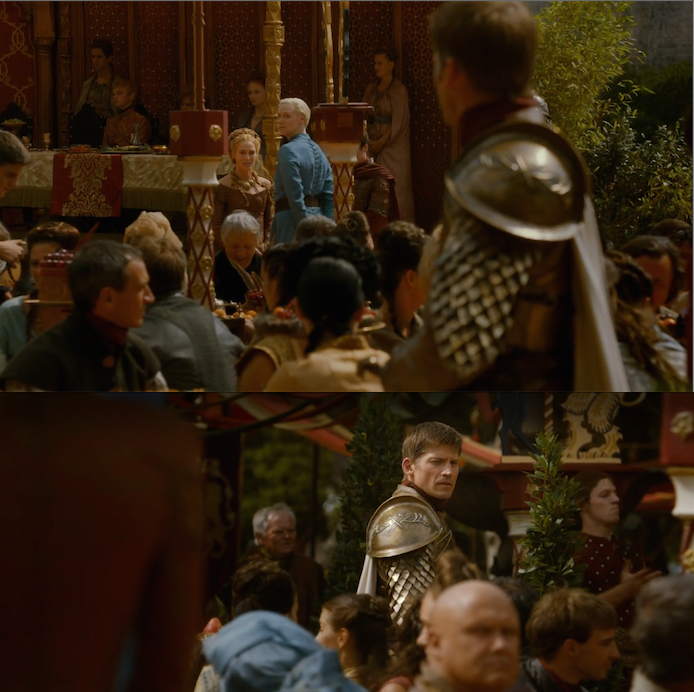 Jaime lowered himself into the bath by degrees, letting his body acclimate to the scalding water. When the water reached to the flesh of his taut stomach, he raised his stump up over his head, and sunk down to his neck. He sat like that awhile, silent; just the sound of the water sloshing against the side of the tub and Brienne’s washcloth as she scrubbed vigorously at a spot on her shoulder while staring at some indistinct ceiling tile. Jaime wondered whether the skin on her shoulder might rub off.

Brienne’s eyes darted to him, then immediately back to the ceiling. “So.”