Damian Lewis Homeland Q+A: “The final episode is both psychologically and emotionally violent.” 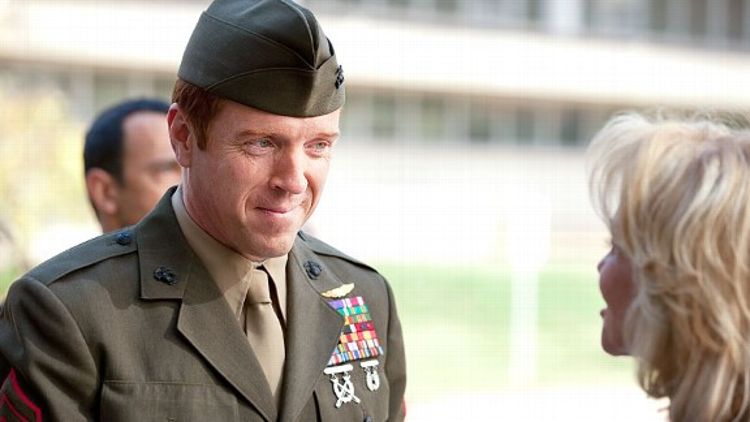 Speaking to Damian Lewis on the telephone is disconcerting — and not because Lewis, in his role as troubled maybe-terrorist Sgt. Nicholas Brody, appears likely to blow himself to bits on Sunday’s Homeland season finale. The redheaded actor has an All-American bearing on television but in reality is an eloquent Englishman with a plummy accent more suited to Boodles & Tonics than boot camp. Lewis had so much to say about his complicated character that he barely required any questions before pontificating on the psychology of suicide bombers, what Brody is really thinking, and how he and Claire Danes are like two broken birds.

How were you initially approached about taking the role of Nicholas Brody?
It all started at almost precisely this time last year when I was filming in freezing cold and smelly Manchester. I got a call from my agent saying, “Alex Gansa and Howie Gordon want to offer you a role in this show they’re doing. I’m going to send you the script.” I read it and I couldn’t believe it. Here we are a year later.

How much of Brody’s true intentions were revealed to you at the beginning?
I was given a pretty good understanding of the themes of the show and what they were trying to present to the world. We all agreed it was not going to be this muscular response to the terrorist threat, not goodies fighting baddies on the streets of New York. It was going to be far more reflective and a little more pensive. Ten years after 9/11 there seems to be more uncertainty, more rogue elements that have cropped up all over the world.

Was that lack of black-and-white thinking what attracted you to the role?
I was just keen that if I was going to be playing him then you would have to believe me when I convert to Islam. I thought that would be the most interesting and most impressive detail: That, in a time of need, I had actually chosen to be a Muslim. We did discuss the immediate assumptions about that: “Oh my God, this guy wants to blow us up. Why else would a Marine have converted?” It seemed like too extreme of a choice for people to understand without there being some violent ulterior motive.

Despite everyone in the country calling Brody a hero, it seems quite clear that he’s anything but. As the season has progressed, he seems more and more like a damaged guy who, more than anything else, is desperate for a mission. Any mission.
Yeah, I think that’s shrewd. Alex and Howard purposely played around with our preconceptions of how the good guys should be and how the bad guys should be. Claire’s character intuitively suspects something — she may turn out to be right, but only has a hunch to go on and no substantial elements. She may be brilliant, but she’s not an inherently likable character because she’s obsessive and at times selfish. And Brody is actively considering perpetrating an atrocity against the United States, yet at times we feel sympathy for him and how he attempts to reconnect with his family and deal with post-traumatic stress disorder. He’s conflicted and damaged by real-life experiences.

There was some talk about similarities with The Manchurian Candidate when the show first came out, but I think there’s a key distinction here: Brody hasn’t been brainwashed by some sinister group. It’s reasonable to argue that Abu Nazir has failed to radicalize Brody and that, as you saw in Episode 9, any reasons he might have to act are personal. It’s a fine line the show has trotted the whole way through.

Was that something you had to keep in mind during the later episodes of the season when it appeared as if Brody had renounced Abu Nazir and embraced his family?
There was a period where it seemed he was settling himself in a rather rational, triumphant way. As we came to the climax of the season I hoped to rediscover some of that damage in him, some of that traumatized, brutalized man. How his experience actually prevents him from making reasonable decisions. He acts irrationally and he acts extremely. He’s damaged but massively vulnerable. We may feel sympathy for those reasons and we also may be afraid of him for those reasons.

Perhaps the most extreme example of that was when he blithely stored a suicide bomb in the trunk of the family station wagon.
To me that impulse was disconcertingly real. After 9/11 there was a belief that suicide bombers were disaffected or marginalized. That they were easy recruits. Yet it’s now clear that’s not true. It’s successful, middle-class Arab men and women, professionals with seemingly happy family lives who are prepared to go to paradise for a greater cause. That’s terrifying. But it’s also interesting when you see the proportion of people who fail at it. It’s the pull of an emotional life, a family, that often pulls them back from the edge. So in that episode, as he prepares to do this monstrous act, we actually see the Brody family functioning in a happy way. So these two different parts of his life are coming to a head at the same time. I think it’s really a battle for his soul.

One thing all actors are told is that the most important thing they can do is be fully present in a scene. And yet Brody, by nature, always seems a million miles away, lost in his own head or plans.
I’m the most terrible daydreamer, so that slightly vacant, faraway look in my eyes is easy for me. Actually, with acting, if you try to play four things at one time you end up falling between all four and it’s a rather generalized, unspecific performance. So you just have to get your mind working in some mercurial way so you can make four changes so rapidly that they all seem to layer on top of one another. At times Brody is frozen by all the conflicting things going on in his head and at times they propel him to act. But he never acts from a place of real stability because, as you say, he’s damaged.

I spoke to Claire recently and she spoke about how she also had to balance her character’s mania on a scene-to-scene basis. It sounds as if you were very attuned as performers.
One of the most thrilling parts of the show is acting with Claire. What’s fantastic about Carrie and Brody is that they’re both such unpredictable, damaged individuals. The ways in which PTSD manifests itself, actually, there are many similarities to bipolar disorder. I think what’s true of both conditions is the need to self-medicate, through alcohol abuse, drug abuse, reckless decision-making, inappropriate anger, and sometimes violence. And also from sex. An amazing need for intimacy. What’s so fabulous about working with Claire is that she’s totally tapped into that. We’re like two broken birds who hobble and flap around each other in a Casablanca-esque way. What’s great about the show is that whatever the characters’ ulterior motives might be, their ability to complete a task is always being undermined by the frail natures of their emotional lives.

They also might be undermined this weekend by a giant explosion. Can you say anything about the finale without spoiling it?
What I can say is that Brody chooses to act. I’m not going to say how, but the way he chooses to act was much discussed and debated. That’s probably all I should say. The final episode is both psychologically and emotionally violent.

The Return of Sleigh Bells, and the Rest of the Songs of the Week