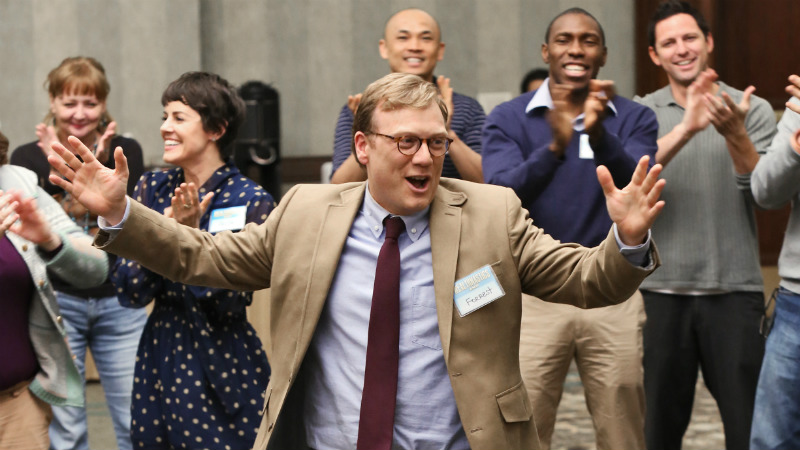 Forrest MacNeil — the star of the provocative new show Review, premiering tonight on Comedy Central — is a bold new TV personality. On his series, he asks a simple but shatteringly powerful question: “Life. It’s literally all we have. But is it any good?” He then proceeds to find out, immersing himself in a bevy of expansive, viewer-suggested human experiences — stealing, addiction, eating 15 pancakes, going to the prom, divorce — and reviewing them, as warranted, on a five-star scale.

Last week at a bar in Brooklyn, I had the chance to sit down with Mr. MacNeil (in person, he bears a striking resemblance to scene-stealing comedy lifer Andy Daly) and discuss the spiteful origin and terrifying future of his massively important new television program. Also! He very kindly offered to review a life experience near and dear to the hearts of Grantland readers. Obviously, we chose “chugging a beer.”

So how did you get into the life-reviewing game?

My background is an interesting one. I’ve been a reviewer for a very long time. I was a film reviewer for local television in Milwaukee, and that career ended. It ended for various reasons that I prefer not to go into. There were some difficulties. There were some charges of plagiarism — and they were true! But that’s the past. And I don’t really like talking about the past. What I do like to talk about is my new venture, which is vastly more important than what I used to do. I don’t know about you, but I feel like life is more important than movies, and so what I’m doing now is reviewing life. Reviewing life experiences. And I’m doing it really for the good of humanity. It’s an important television show. That helps people.

Absolutely. So when did this great big idea dawn on you?

There is a community of film reviewers. They get together a couple times a year, at various functions, and they communicate with one another on the Internet. And I picked up some Internet chatter where a lot of these folks — my colleagues — were ridiculing me, rather harshly, for some of the difficulties that I went through. And I sat down and I thought to myself, “What could I do to respond to this?” And I was about to type up an angry response on the message boards, but then I realized, “No, the actual response would be to do something far beyond what any of them is capable of or would dream of!” What is that thing? Thought about it. Thought about it. Then it hit me: I’m gonna apply my reviewing skills — my unique insight — to something vastly more important than movies. Life. Life itself.

Amazing. What have you learned?

Wow. Great question. I’ve learned that, the only way to understand life — is to live it. And I’ve learned that there are certain experiences that you and I have never engaged in, and there’s maybe a good reason that we haven’t. Possibly, if you make up a list of things you’ve never done, you’ve also made up a list of things you shouldn’t do. But that’s an important thing to discover and an important thing to share with my audience.

You know, I’m realizing it’s kind of like YOLO —

YOLO? I have not heard of YOLO. What does it mean?

Oh, it’s this thing the youth were saying last year. “You only live once”? As, like, an argument for doing whatever stupid thing you want?

Oh! Absolutely. “You only live once” is also a potentially a good argument for not doing stupid things. I think this show is an important public service, especially to young people who are sitting there wondering: “Should I make a sex tape? Should I get addicted to drugs?”

On Thursday, March 6, the people will see me review “stealing.” I learned an awful lot about separating people from their belongings. I also reviewed “addiction,” which is a review that will affect the rest of my life — I became profoundly addicted. And I reviewed “going to the prom.” Which is not as much fun as it sounds like.

Have you gotten a chance to screen your show for your old colleagues turned enemies?

Not yet. Not yet, my friend. But I cannot wait until Thursday, March 6, when all those people get a look at what I’m up to and realize they’ve been wasting their lives.

You’ve made a strong commitment to never back down from a review challenge.

Absolutely. I will never back down. Because I’m not just doing this show for fun. I’m not doing it for entertainment. I’m doing it for the betterment of society and the good of humanity. What I often say: A surgeon doesn’t give up on heart surgery on the first sign of difficulty. I don’t give up on my reviews. Which are equally as important.

This is a serious question that I have discussed with my producers. What if someone says, “What is it like to jump off a 50-story building?” Do I do it or not? It’s a serious question. I think something like that would be the moment where I either break my vow — or expire.

Wow. Wow. On that note, you’ve committed to reviewing an activity for us now. Here I have a pint of SingleCut Billy Full Stack Double IPA.

I’m going to review chugging a beer! This is something that young people are curious about. I myself have never chugged a beer. Actually, I can count on one hand the number of beers that I’ve had. Most of those have been light beers. This here is a very serious beer, with a high alcohol content. I confess I’m very worried. I don’t know how I’ll do. Here goes. And by the way, once I’m done with this, there’s a good chance that I’ll say things that will make a complete fool of myself. I just don’t know how this much alcohol consumed this quickly will affect my brain! Here we go.

Oh. Oh, dear god, it burns. It burns my throat to go down this fast! But to chug it is to not stop, right? So I should keep going? It all has to be in one go?

I’m sorry. I have to stop again because I’m getting beer on my shirt. And I need to wear this shirt later on. I didn’t bring a change of clothes. Here I go. I can tell I’m gonna have gas all night from this. My stomach is very sensitive.

All right. Well, there we go. I drank that entire glass of beer.

Pretty quick! I mean for me it was very quick. I have to say I found it physically difficult, obviously, and it was a mess. But the greatest problem to me was the psychological problem — the terrible fear that I now have that drinking that much alcohol that quickly will scramble my brain, and make it impossible for me to function over the next three to four days. Let me see if there were any positive aspects to it. I’m feeling a little loose. I mean, beer’s delicious. No doubt about it. It’s hearty. So I can’t just give it a half a star. I have to give “chugging a beer” — one star.