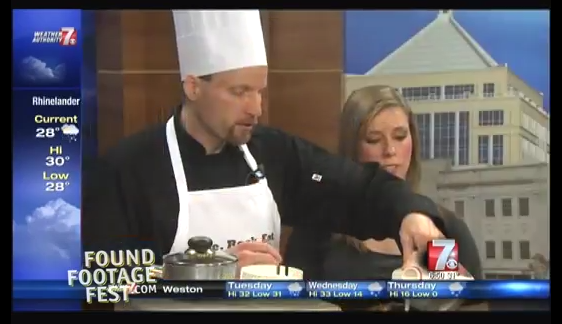 If you remember Kenny “K-Strass” Strasser, you probably remember him fondly. K-Strass made the Midwest morning-show rounds just shy of four years ago, his appearances resulting in a series of clips that speak for themselves: Falsely claiming to be a yo-yo champion, he’d do things like engage the anchor in a few minutes of weird chitchat before attempting to execute an eight-yo-yo maneuver called the Blue Flying Angel and nearly breaking a limb. K-Strass was the product of a collaboration between actor Mark Proksch and the curators of the Found Footage Fest, Joe Pickett and Nick Prueher. Proksch graduated to become Nate from The Office, and Prueher and Pickett went on to give us the gift of Chef Keith.

It seems like it should be harder to bluff your way onto a morning news set (“no small feat,” claimed one of the stations that got Strassed), but apparently where there’s a will, there’s a booking agent to be duped. Chef Keith is neither a chef nor a Keith, but Prueher, assuming the role of a “self-taught” culinarian who authored the nonexistent Leftovers Right: Making a Winner of Last Night’s Dinner. (Don’t bother to line up for the book signing, though; it was canceled.) Apparently enough time has passed since K-Strass’s tour for these shows to have forgotten about the existence of jokesters, and thanks to all the tape Pickett and Prueher have sifted through helming the FFF, the two have expert knowledge of exactly where the line is between “totally strange but believable interaction” and Zoo Story alienation. In fact, it seems to take awhile before a host even considers resisting eating something like “ants on a leg” after a discussion about the “toilet” smell of refrigerated turkey, or takes pause at the questionability of a week-old leftovers drive. The stubborn logistics of morning shows provide the perfect opportunity: Everyone is exhausted — too exhausted to talk, actually — but very good at pretending not to be. You wake up at 3 a.m., you draw eyes on your face, and you fake being a conscious human being. I didn’t know this was how being a morning show anchor was until I saw someone eat a pink milk shake made of meat, mashed potatoes, and pie just before seven in the morning. When I saw it, I knew everything.

You don’t have to heat the gravy — room temperature will do. Just put it in the bottom of the ice cream cone you’re holding, and your hand will heat it up. A scoop of mash, corn sprinkles, cranberry topper. Sometimes the camera angles inadvertently make everything 10 times worse/better by offering viewers a crotch shot of Chef Keith behind a tableau of diced ham, brown mush, a smattering of corn on a plate — all waiting to become a frappe — as he muses that “the average person eats like a pound and a half of feces a year.” “Yeah, that’s really strange,” responds the anchor at 6:19 a.m. (because when you’re going through the morning show, keep going).

We may have entered an oversaturation point with fetishizing food in media: social stream dinner photos, way too many competitive cooking shows, food truck maps, celebrity-chef-inspired frozen entrées. It’s like considering the turducken when you’re full instead of hungry, all that meat inside meat inside meat. Besides the time stamp, it’s funny and refreshing to watch someone use toxic ink to trace his hand onto a flatbread and then cut within the lines to make a toothpick-impaled sad sandwich. There’s something sadistically pleasurable about watching someone have to eat something they don’t want to, and I must not be the only person who feels this way, because it happens every season without fail on Survivor and The Challenge. Eat the maggot. Drink the milk shake, camera-ready, while you rattle off the pleasantries that fill the gap between news and weather. We finish up, then flip on Iron Chef and see a contrastingly enviable experience, and then on to Chopped, which falls somewhere in the middle. What a weird impulse, the psychological equivalent of an igloo meat loaf: mysterious but documented. I’d sign up for a whole season of this, working title Meatshake in the Morning.

'Frozen' just became the first film directed by a woman to pass $1 billion at the box office.