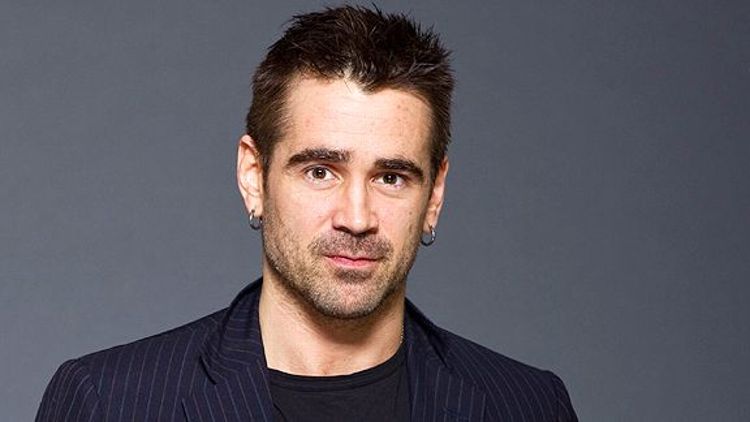 In the wake of his successful gender transition, Chaz Bono has spoken of wanting to serve as an advocate for people who feel “trapped” in their bodies. People like him who, for whatever reason, grew up loathing what they saw in the mirror, rejecting the shallow labels that society placed upon them. While it might not be exactly who Chaz had in mind, the first person this made me think of was Colin Farrell.

In the beginning of the last decade, Farrell emerged from nowhere (or at least from one of Joel Schumacher’s bawdiest fantasies) to become one of Hollywood’s leading men by fiat — the sort of star-anointing from on high (or, in Hollywood’s case, “while high”) that happens every few years and rarely works out well for anyone. (“Ryan Reynolds? Gretchen Mol and Julia Ormond will see you now.”) The then-24-year-old Irishman was handsome and hungry, and on the strength of little but a pair of eyes the color of aged Jameson, he promptly gobbled up every starring role in town: a noble, blandly macho WWII POW in Hart’s War, a cocky, blandly macho cop in S.W.A.T, the only publicist in New York without a cell phone in Phone Booth, and as something-something-young-something in The Recruit (seriously, does anyone actually remember that movie?). In each of these pictures, Farrell was occasionally compelling but mostly unmemorable, a sprinter stuck running in quicksand. Yet because none of them exactly tanked, the myth of Farrell-as-leading-man continued, to the increasing skepticism of everyone — including the man himself. (Check out Farrell’s face in this poster — it’s screaming, “What the hell am I doing here — and is that really LL bloody Cool J?!”)

It was only when the pressure was off that a spark appeared. Specifically, in the two supporting performances sprinkled into his relentless 2001 to 2003 run of playing cardboard cut-outs from the Protagonist Factory. As Tom Cruise’s conflicted rival cop in Minority Report, Farrell was a haunted hunter, busying himself by being interesting when just looking good in a suit would have been enough. A year later, he was the best thing in the dreadful comic-book flick Daredevil, turning in a gleefully sadistic performance as Bullseye, a paper-clip sucking psycho who never misses. (Perhaps it was more than acting. Both Farrell and Bullseye were Irishmen with terrified eyes brought to America by rich men thanks to lethal skills and an equally lethal inability to control them.)

Clearly, the guy had something going on — unfortunately it was the sort of something that’s genetically bred out of starring roles, the sort of unpredictable sparkle that might distract from computer-generated space-chickens or love interests. At this point, we all should have realized what Farrell himself clearly did: He was trapped in the wrong body, a high-strung weirdo stuck in the short, handsome frame of a movie star. So in retrospect, what happened next makes perfect sense: If Farrell felt like a fraud pretending to be a star onscreen, he could at least play the part in his spare time. Farrell’s best role in those years was as tabloid bait, and he acted the Christ out of it, quickly racking up a laundry list of unsurprising, TMZ-ish infractions: public drunkenness, high-profile horn-dogging, making a sex tape with a Playmate, and propositioning 70-year-olds.

By the time of 2004’s wretched Alexander — in which a bleached and bewildered Farrell played the emperor with literally no clothes — the joke was on everyone, and when 2006’s turgid Miami Vice beached itself on multiplexes it wasn’t funny anymore. Farrell’s sluggish performance in Michael Mann’s bracing ode to testosterone and speedboats was truly astonishing: unkempt and greasy, Patron practically oozing from his pores, Farrell’s Crockett wasn’t so much a character as a cry for help. Whatever charm the actor once possessed was buried beneath a thick moustache and a thicker hangover. Muted and morose on-screen, dangerously overdoing it everywhere else, Farrell wasn’t acting — he was protesting: Look at what you turned me into! I should be doing community theater in Kilkenny, not taking salsa lessons with Gong Li!

Anyway, it all came tumbling down in predictable ways: The big parts dried up, then he did too. Colin Farrell vanished from the national conversation — or at least the national Twitter feed — as capriciously as he had entered it, as if David Geffen whoever controls Hollywood had simply noticed the wrong switch had been flipped and then quietly corrected it. He seemed destined to live on as a punch line, as memoir fodder or, worse, in television. But then came In Bruges, 2007’s brilliantly low-key and chatty crime picture written and directed by playwright-turned-filmmaker Martin McDonagh. The role was Ray, an excitable hit man trying desperately to survive both the charms of a medieval city and the ravages of his own conscience. Ray was ruined, in exile, and yet unable to tamp down a bubbling, boyish belief in romance and opportunity. For Farrell, it was salvation.

“I was kinda more interested in … the sadder, more vulnerable aspects [of the character] which, actually, when you meet Colin you see there’s a lot more of that than you’d have maybe suspected from the myth of the press,” McDonagh said at the time on why he freed Farrell from movie jail by casting him in the picture. And Farrell repaid his fellow Irishman’s trust tenfold: Clean-shaven — not to mention clean and sober — Farrell attacked the role with the same gusto he once would have brought to an open bar — and with similarly intoxicating results. There’s a mania to his (Golden Globe-winning!) performance, a rawness both uproarious and devastating. It’s not just that we don’t know what the magnetically vulnerable Farrell-as-Ray will do next — it’s that he himself appears terrified to learn what he’s capable of. And yet, as he swings between gleefully karate-chopping a dwarf and contemplating suicide, Farrell finally appears at ease. This is who he is and always has been: a hilariously volatile emotional headcase, dammit, not the leader of an elite anti-drug task force.

Farrell followed up his greatest success with equally excellent work in indie pictures like Crazy Heart, The Imaginarium of Dr. Parnassus, and The Way Back. And this week he returns to Hollywood under very different circumstances. Freed from the curse of his looks, he’s letting his freak flag fly — and producers seem content to let him do it. In Horrible Bosses, the same guy who once sleepwalked through Terence Malick’s historical nature documentary The New World, has the time of his life as a coke-addled cubicle dictator with a comb-over and crazy eyes. Later this summer comes Fright Night, a remake of the clever 1985 horror comedy, with Farrell’s twitchy charisma put to good use as Jerry, the menacing vampire of suburbia.

Former closet-case Farrell is in uncharted waters here, attempting to make a second go of it after bravely bucking expectations and proudly coming out — as a character actor. The true test of his rehabilitation — and the industry’s acceptance of it — will come next summer when Farrell 2.0 appears in the very mainstream remake of Total Recall. Not, as you or I might have hoped, in a scene-stealing turn as the dude with an angry baby protruding from his stomach but in the lead role made famous by noted character-free actor Arnold Schwarzenegger. Here’s hoping Farrell can survive a second trip through the star factory. Because his is the rare Hollywood fairy tale told in reverse. We began with the boring prince. Here before us, at last, is the far more interesting frog.