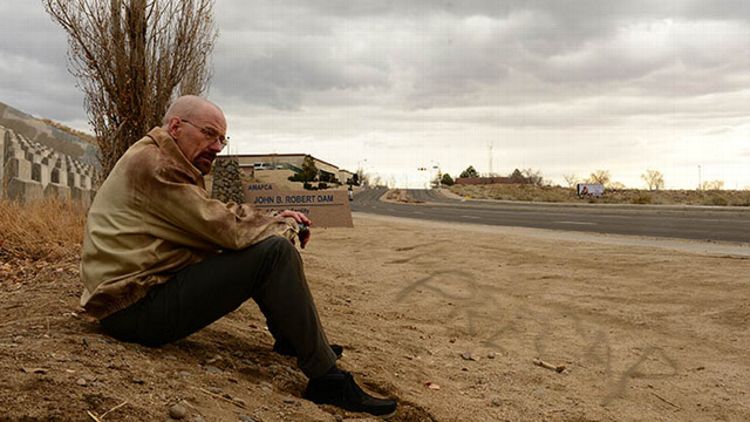 A Final Toast for Hank

Andy Greenwald: Hank died last week. Let’s say it again, to be clear: Hank died last week. That was him, lying in the desert, furiously aware of his fate long before his genius brother-in-law figured it out. He was ASAC Schrader. His name was his name. He didn’t beg or stall. He told Uncle Jack to do what he was going to do. And Uncle Jack — gun in his hand, an almost apologetic smile on his face — did just that.

Deaths on TV are strange, wrenching, and unsettling. They’re also weirdly easy to move on from. After all, we only see these people once a week. Characters take episodes off all the time. The churn of a television season is often designed to highlight a whacking but move quickly past the after-whacking. The focus is on the shot, not the hangover.

The rush toward the end of a series is something else entirely, when the ocean of collected narrative suddenly swells and crests like a wave. In that metaphor, these final episodes of Breaking Bad have been a tsunami. Hank’s death swamped us, pulled us under, but immediately there were a dozen other more pressing things to worry about: Jesse’s fate, Flynn’s incomprehension, Skyler’s knife, Holly’s tears. Much of the conversation about the devastating “Ozymandias” has focused on the wrenching, complicated phone call that ended it. Necessity and narrative have forced Breaking Bad to push quickly past the demise of one of its core characters. That’s understandable. This is the story of Walt’s death, not Hank’s. But that doesn’t mean we shouldn’t take a moment to mourn the latter.

(One other underappreciated aspect of Breaking Bad: its quality of mercy. The delicate balance of “Ozymandias” was truly something to behold. The show didn’t flinch from the darkness at the end of its story. But nor did it revel in it. The camera treated Hank with a dignity a cabal of neo-Nazis could never muster: He took his bullet from a distance, as if all our eyes were slightly averted. Flynn’s life was torched mostly between commercial breaks, letting RJ Mitte play the smoldering wreckage, not force him to try to act his way out of a burning building. And Marie’s howl was silent. We know these people, this marriage. We know what this death meant. To give voice to it, in that moment, would have been lurid and beneath a show like this, one that has always been violent but never been about violence, emotional or otherwise.)

It’s often not until a work of art is fixed and static — a beginning, middle, and end — that its individual components take on the full measure of their import. In time, and maybe after a few rewatches, the weight of Hank’s demise will hit us. How sad and lonely and bruising it was. How unavoidable and yet unwatchable. It was a tough but fair lesson to learn: that the lone sheriff brings the bank robber to justice only in the movies. (And on CBS.) Still, it’s worth noting: Outside of Walter White, no character on Breaking Bad was transformed as much as our mineral-obsessed lawman. In fact, his transition from blowsy comic relief to lean, chiseled man of action mirrored the metamorphosis of the show itself almost exactly. Watch Dean Norris in Season 1 and watch him in Season 5. Then crack a Schraderbrau and raise a toast to an actor who did everything that was asked of him and did nothing but surprise us in the process.

At Least Hank and Gus Seem Happy, Wherever They Are

Look who I met in actor heaven Even God too afraid to keep him out God to Gus: ah yeah cool c'mon in pic.twitter.com/xb59FM0OBY

Aaron Paul IncontinenceWatch: The Final Two Episodes Are So Much Messier

No, he didn’t specifically tell us pants would be pooped in this week. But read “messier” however you like; at this point, we’re almost taking our Sunday-night beshittings for granted.

In Your Heart of Hearts, You Knew It Was Her All Along

Netw3rk: My prediction for the Breaking Bad finale, in comic-book format: 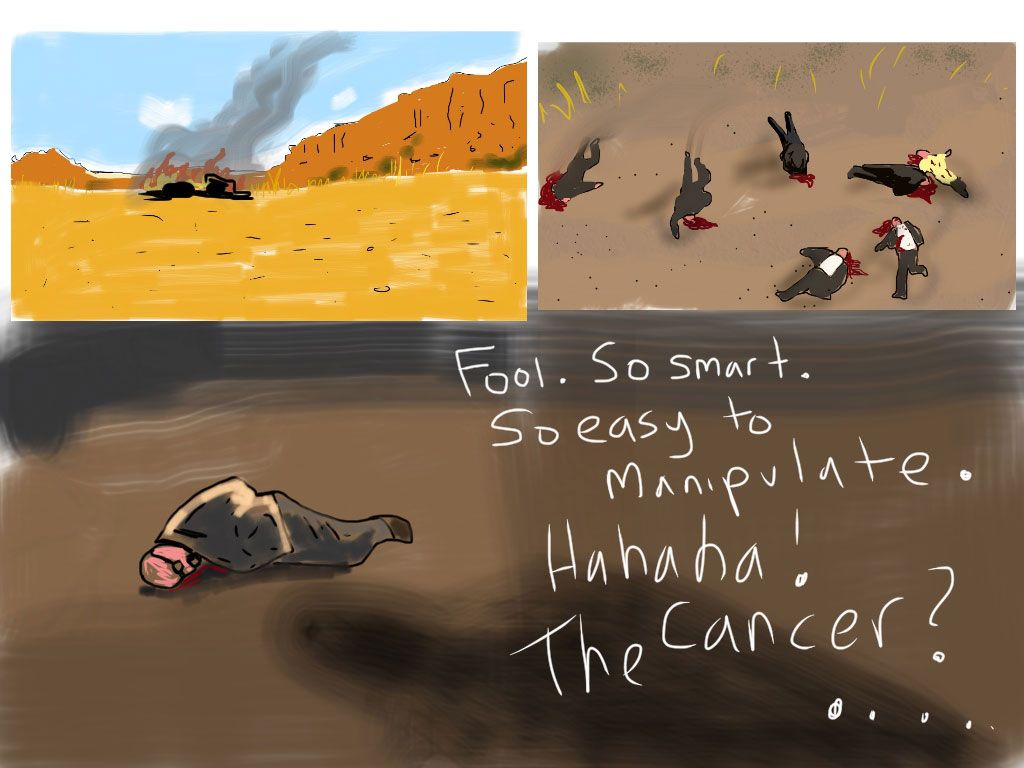 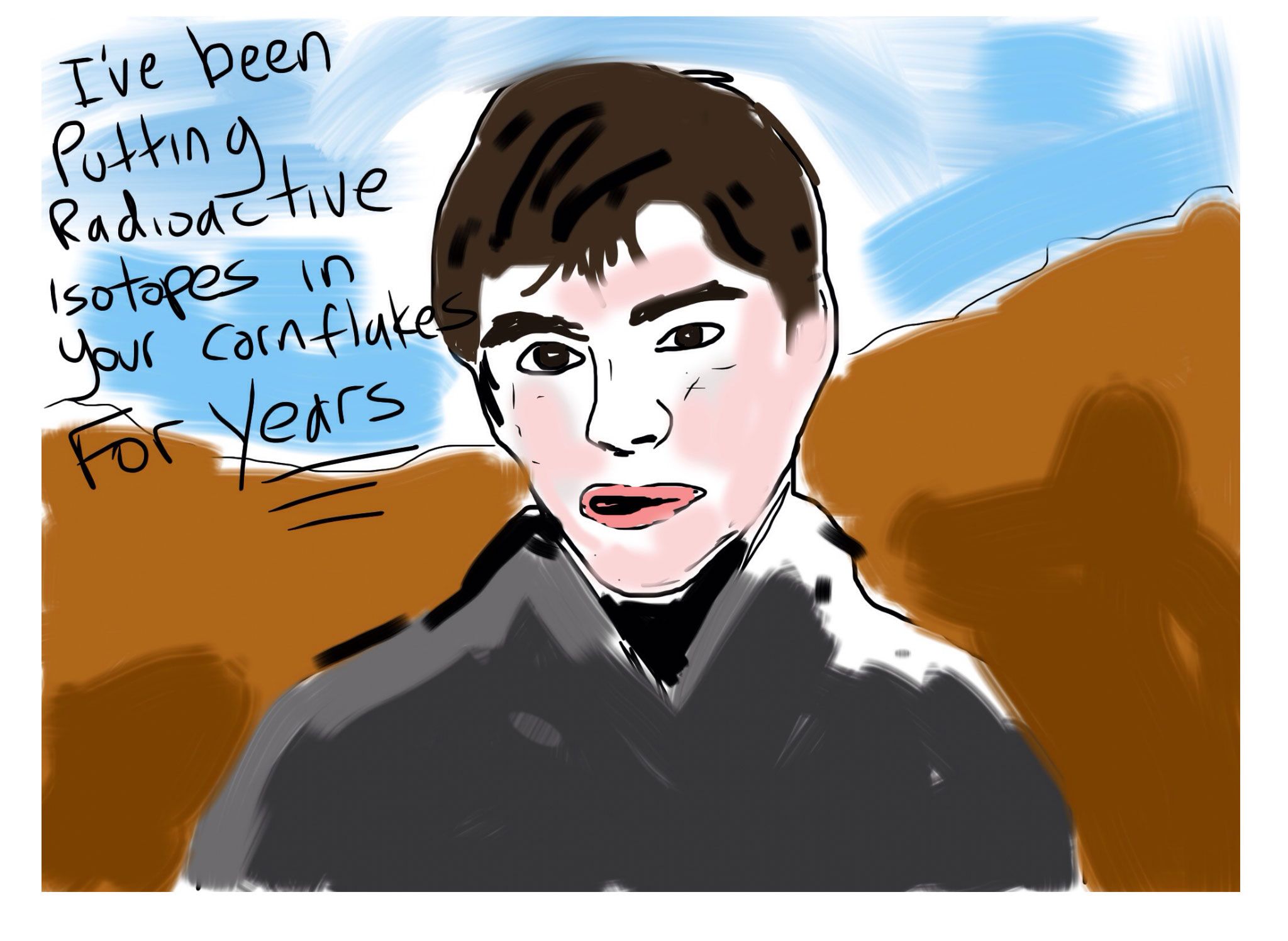 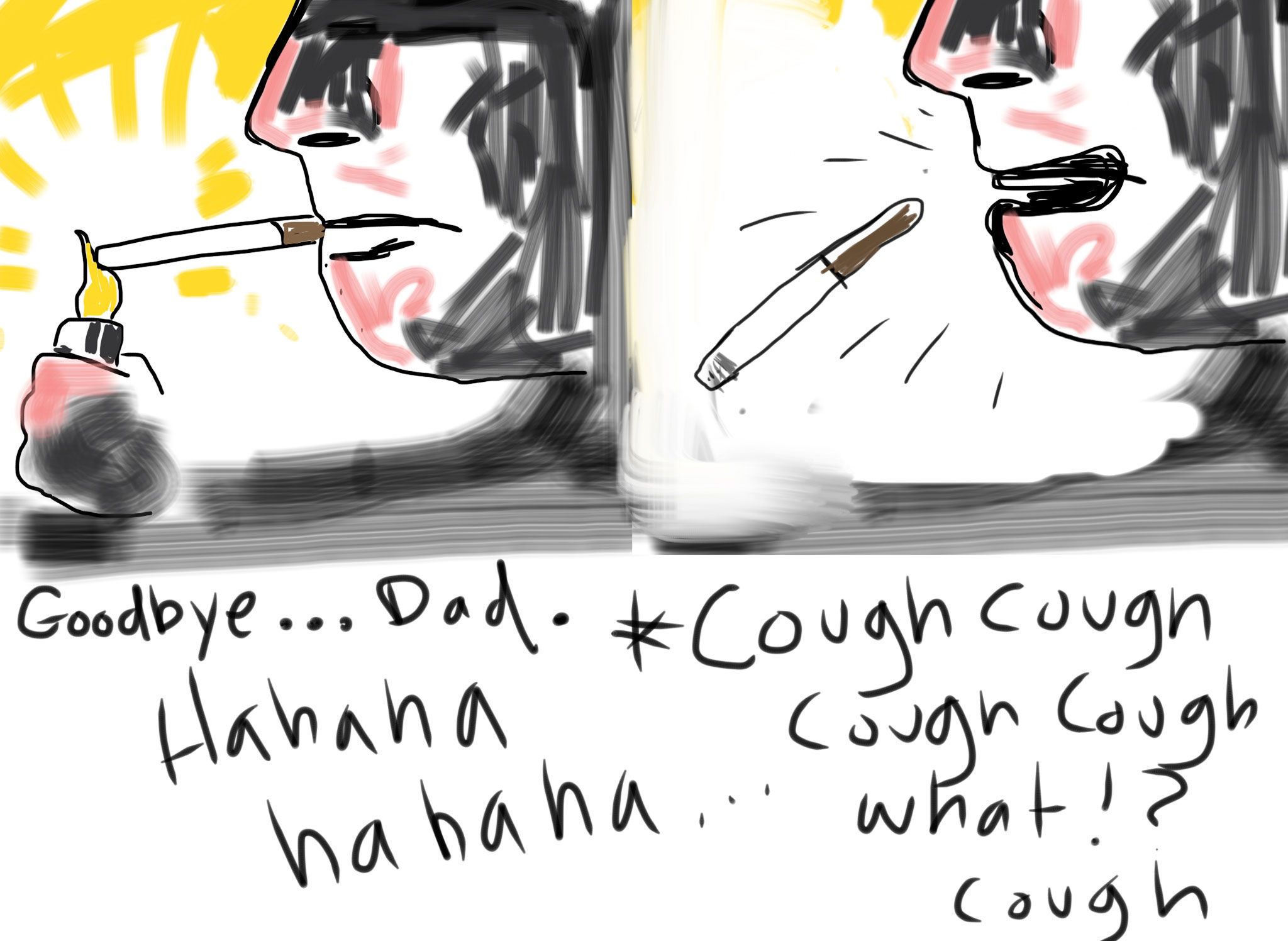 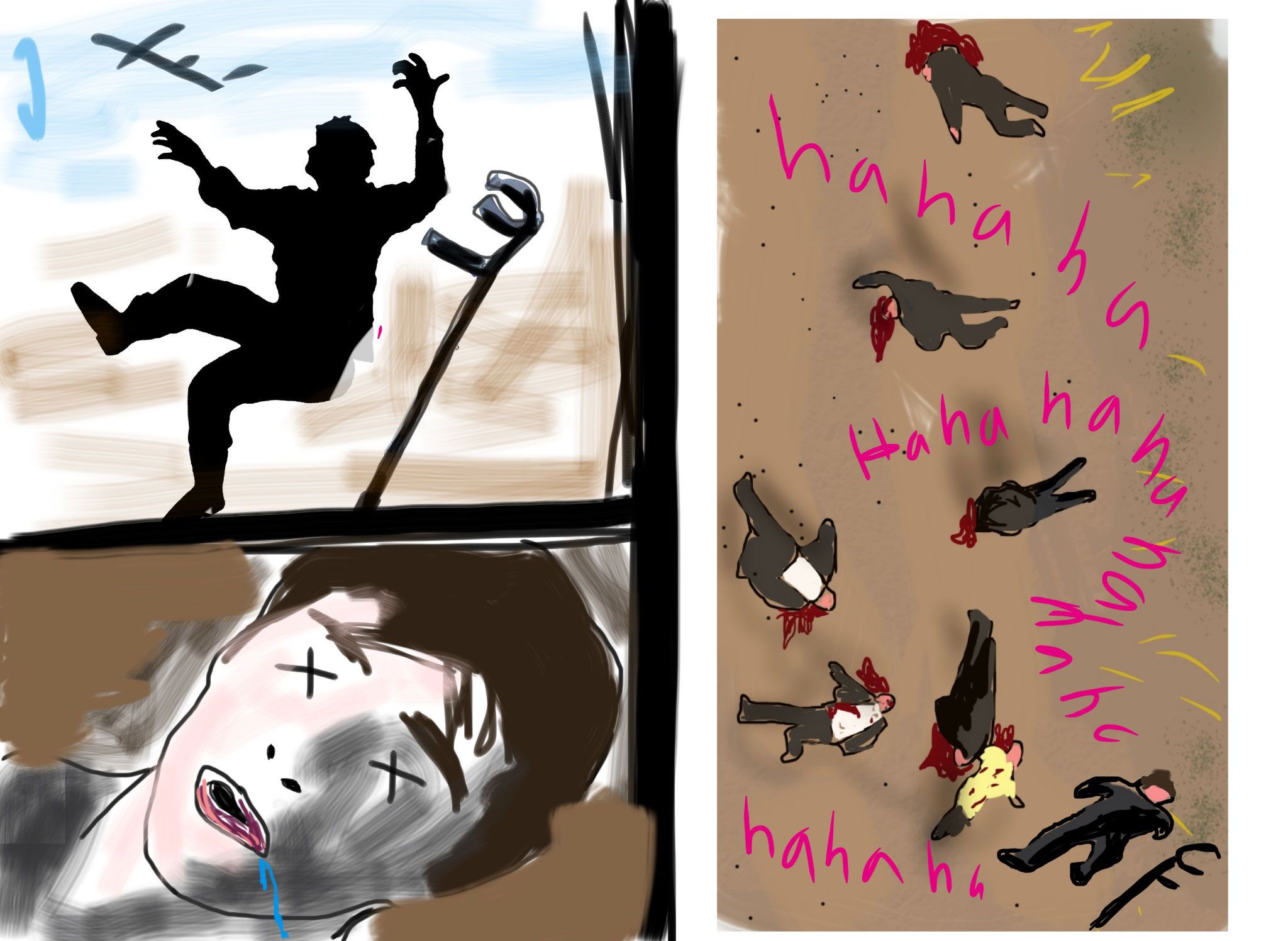 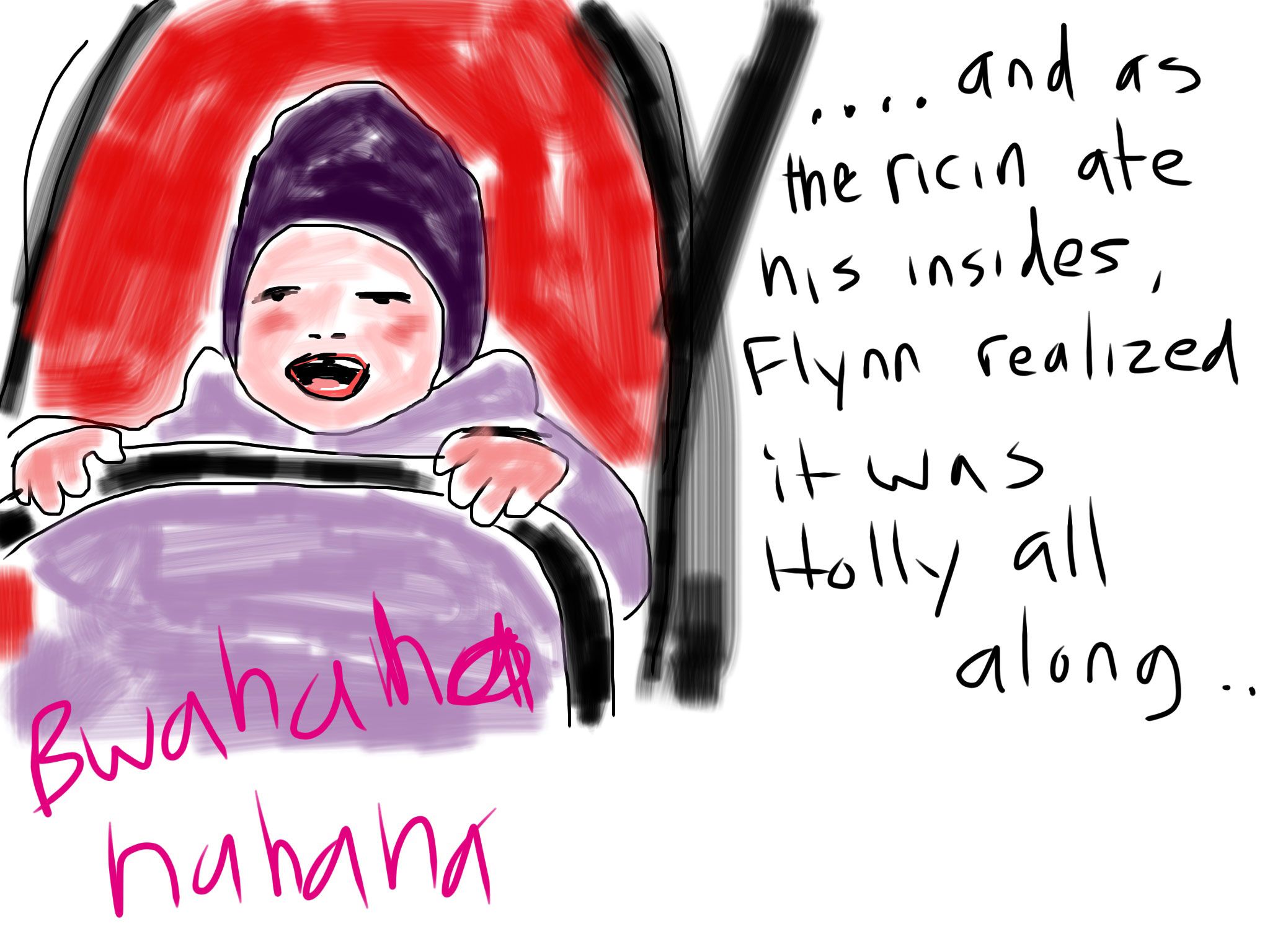 John Lopez: First, just because the Vince Gilligan players might be the best TV writers ever to snack on Red Vines, pardon my pride in partially calling that Jesse would end up Todd’s meth monkey. Granted, it might be a long shot that “good, full-head-of-hair” Walt’s M60 is there to save Jesse after Walt spat the Dilophosaurus venom of truth about Jane’s death in Jesse’s face, the single most painful part of “Ozymandias” for me. But belief in the humanity of someone we’ve gotten to know as well as Walter White — for all his megalomania and falsely rationalized fuck-ups — that belief dies hard.

Which is apparently at the heart of a war between some critics and the Internet fandom at large. After the emotional waterboarding that was Walt’s phone call to Skyler, most critics and recappers solemnly tolled the bell on Walt’s humanity, some marking this episode as the moment he sinned past all redemption; the Internet, predictably, bit back. Maureen Ryan responded with a post titled “Why Walt’s No Hero”; Vulture titled its response “Why Viewers Need to Whitewash Walter”; and The New Yorker concluded that some viewers were “watching wrong” by ignoring all the dead kids on Breaking Bad.

Granted, the Skyler hate is always disturbing — I personally have enjoyed her growth as a character both complicit in and abhorred by Walt’s crimes — but why is the indefatigable sympathy for Walt, in the face of all that has happened, so surprising? Isn’t that the point? For all Walt’s misdeeds, the writers have worked really hard, even from the beginning, to keep us with him as he sinks deeper into the horror. Tad Friend’s New Yorker article even quotes Gilligan saying, “The truth is you have to be very schematic indeed to force someone into cooking crystal meth.”

Some examples: Walter killed Mike, but Mike didn’t blink about the idea of killing Walt in Season 3. Fring had his sights on Walt before Walt blew him up. And Walt’s death sentence on Jesse was horrific, but how many times had Walt risked himself to save Jesse before? Even to get Walt and Jesse to that point, the writers had to plop down a bald guy in the plaza to use that old Shakespearean device of the tragic mix-up — all respect to Gilligan & Co., but that one’s a bit of “Just go with it; otherwise this will be boring.” Of course, one of the hardest hits is Hank’s death. He dies because of Walt; he also dies because of his Ahab-like righteous fury. Walt was calling the neo-Nazis on Jesse, not Hank. And frankly, Hank’s pursuit of Walt this second half hasn’t been a model of prudence, let alone legality; it wouldn’t take a lawyer like Saul Goodman to have a field day with it in court. Hell, Hank was cool with letting Jesse die if it meant Hank could nab Walt. And let’s not even talk about Marie …

This is not apologizing for Walt: His meth cooking and megalomania are the font of it all, in the same way a tribal dictator doesn’t have to personally kill every innocent villager to have blood on his hands. But I’d argue that the genius of the show is precisely the ability to make us sympathize, even to the end. The truth is that Walt is NOT an evil genius. I mean, compared to Michael Corleone, who built a national crime empire, or Tom Ripley, who never gets caught, Walt’s a failed criminal. (He couldn’t even think to bargain his meth-cooking skills for Hank’s life.) Hell, even the real bootlegger Joseph Kennedy could get his son elected president. So, I think those who wax rhapsodic condemning Walt for all his crimes are a bit disingenuous. The point, to me at least, is that we’re all capable of ruining our lives and those of the ones we love. We probably do it on a minor basis every day. Anyone who stands on a soapbox and pretends Walt’s crimes are not relatable is seeing Breaking Bad as a static portrait with firm lessons, rather than the mirror that great art ends up being. Even if Vince et al. had those intentions, at a certain point, to paraphrase Roland Barthes, the author dies; how we interpret the work is as important as what the author may have intended. I think what makes Walt so inescapably engaging for us everyday viewers is precisely that he’s a lower-middle-class schlub stuck in the economic morass of modern America. In the real world, there are a lot worse criminals and sociopaths than Walter White, and they get away with it. But Walter White isn’t a monster you can comfortably distance yourself from; he’s one of us.

Steve McPherson: Did you notice how Walt rolled his barrel of money right past his pants from the very first episode? Turns out in an alternate take there were a couple other things out in the desert he rolled right past.

Mark Lisanti: Even though the universe of possible Breaking Bad outcomes continues to shrink with each passing week, it never contracts quite as quickly and neatly as we guess it might, because criminally insane showrunner/bespectacled trickster coyote Vince Gilligan remains two steps ahead of his audience at all times, taking a psychotic glee in the way he subverts our expectations. He doesn’t just twist the knife when it’s hilt-deep in our guts, he cracks our skulls with a toaster, and as we stagger in tiny circles from the force of the blow, he runs us down with a battered Aztec. He looks like such a nice guy with those glasses and the wispy goatee — hey, come back with that baby! That is not your baby, Vince Gilligan! Put the baby back in the baby-holder. It’s not screaming with joy because you’re wearing a “The One Who Knocks” T-shirt with an arrow pointing down to your man-business. It is a baby you’ve stolen.

Vivid digressions of creative monstrosity aside, maybe it’s time to admit it: As hard as we try to spoil the surprise party awaiting us with our guessing games, taking a vaguely pathetic and outsize pride in every dot we (accidentally) connect in the unknowable constellation of his endgame, none of us is a match for Gilligan. We put the hundred monkeys in front of the hundred stainless-steel barrels, just like the instructions said, and the best result we get is some blue rocks covered in macaque feces. It just doesn’t seem worth the inevitable disappointment of failure to hypothesize that Jesse Pinkman is tethered to a line running from the ceiling because he’s going to hang himself with it, gazing with unfathomable sadness at the taunting photo of Andrea and Brock, once he realizes the futility of his predicament. Or that Walter White bought that platoon-slicer of a cannon to cut some neo-Nazis in half on his way to free Jesse from his captors, not realizing that his irretrievably broken protégé, swinging gently from that wire, is already beyond saving. Or that the reconstituted remnants of the White/Schrader family, now in witness protection, are too far away at their new Montana ranch to ever hear an apology, or to see his suicide-by-DEA-field-office in their now-abandoned backyard. There’s a reason we’ve seen that pool so many times.

Or is there? There’s no point. We’re wrong about all of it.

Gilligan has already left the baby on the steps of a convent in Argentina. With a million dollars tucked into its diaper bag. They would’ve gotten a big kick out of the T-shirt.