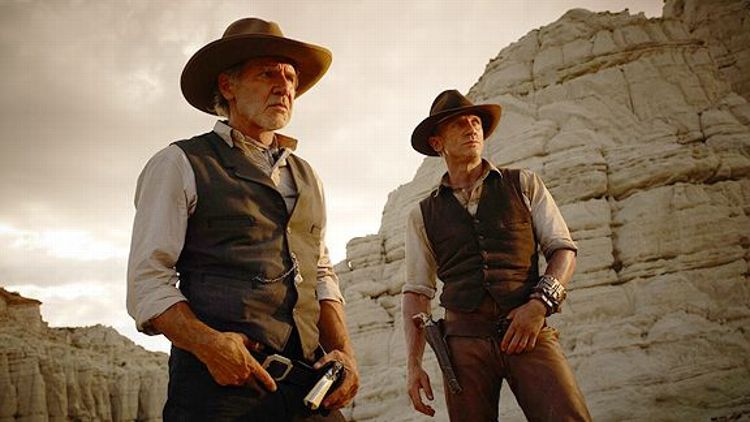 Despite a premise that fused two once-reliable genres and a cast featuring both Indiana Jones and James Bond, Jon Favreau’s $163 million Cowboys & Aliens got smurfing smurfed at the box office over the weekend, opening to a measly $36.2 million — well below even the modest $45 million its makers had predicted. As Harrison Ford scrambles into the nearest refrigerator, we at Grantland are left to wonder just what happened. We asked an agent, a producer, and a publicist for insight on why C&A bombed so badly — and what the fallout might be for its makers and Hollywood at large.

1. A Bad Title
Cowboys & Aliens sounds like a good time — the title implies a delightfully overstuffed romp that mashes together the clichés of two beloved genres with the same cheerful élan of a school-skipping teenager mixing Junior Mints in with his popcorn. And yet, for some head-scratching reason, the picture was conceived as a deadly serious actioner in the vein of Unforgiven and Alien — call it another example of Creeping Nolanism. Virtuoso scowling from Daniel Craig and Harrison Ford proved no match for the absurdity of the concept and the juvenilia of the name; C&A’s first trailer incited giggling before screenings of Harry Potter last fall (which put Universal’s marketing chief in the awkward position of having to insist to the New York Times that his movie was actually way less fun than it seemed). Heading into opening weekend, tracking polls showed strong interest in C&A — but people may have been anticipating the wrong movie. A better, more entertaining one. “It’s not quite Shawshank Redemption bad — my top pick for the best movie to be killed by its title,” says a movie producer we spoke to. “But the name is horrible.”

2. No Stars
Daniel Craig and Harrison Ford may seem like box-office draws but let’s be honest: Audiences have not been kind to any of their recent ventures outside of their martini-sipping and fedora-wearing comfort zones. (Ford’s résumé in particular deserves a harsher reexamination. The guy hasn’t had a legitimate, non-Indy action hit since Air Force One, a movie that would have celebrated its bar mitzvah last year.) Robert Downey Jr. was originally cast as the lead cowpoke (he bailed to cross-dress in Sherlock Holmes 2), and his strong box-office track record — not to mention his winking, welcome persona — would almost definitely have been able to lift even a leaden film like this one above the white-capped heads of those devil-worshipping Smurfs.

3. Obscure Source Material
Outside of the major superhero franchises, recent comic-to-screen adaptations have been hit-or-(mostly)-miss. The 2006 graphic novel on which Cowboys & Aliens was based might have registered with Comic-Con attendees, but general audiences didn’t know it from Scott Pilgrim, Kick-Ass, or Jonah Hex, three other little-known comics that were adapted into money-losing movies last year. As even the big-ticket heroes stagnate, the mere presence of staple-bound source material isn’t enough anymore. Which unfortunately means another season in development hell for our dream adaptation of Klarion the Witch Boy.

4. Alien Fatigue
Prior to C&A‘s release, Earth had already been invaded by aliens seven times in 2011 — and mostly to disappointing box-office returns. (Good news for you, James Franco!) Also, nobody cares about Westerns either: “The Coen brothers’ True Grit was an anomaly,” says an agent we spoke to.

5. The Promo
Despite all of the above, C&A was green-lit on the back of the attached talent — but only two things are really expected of pricey names: showing up on set at least marginally sober and, as the release date nears, working the talk show circuit like a hungry comedian. But Daniel Craig was reportedly a “pain in the ass” when it came to doing publicity. And the legendarily cranky Harrison Ford told interviewers he was “in it for the money” and that he read 30 pages of the script before throwing it across the room with the same ferocity he once used to throw punches. “That stuff hurts a lot,” says one Hollywood publicist. “Especially when it’s the most marketable person in both of the genres they were trying to sell it — he’s Indiana Jones and Han Solo. Why would people invest in the movie if they don’t feel the star is?”

6. Too Many Cooks
Cowboys & Aliens was financed by Relativity, Universal, Reliance, DreamWorks, and Imagine. Among the screenwriters who took turns on the script: Steve Oedekerk, David Hayter, Thomas Dean Donnelly and Joshua Oppenheimer, Jeffrey Boam, Thompson Evans, Chris Hauty, Hawk Ostby and Mark Fergus, Alex Kurtman, Roberto Orci, and Damon Lindelof. With that much creative bureaucracy gumming up the works, what could possibly go wrong? “There’s the Double-Digit/Double Trouble theory: Any time you have 10 or more credited ‘creatives’ on a movie, excluding the director, you’re in trouble,” says the producer. “This one had six credited executive producers, five producers, four co-producers, and five writers for a whopping total of 20! Now I know why my mom says, ‘What do all of those people do?’ when she reads the credits of a movie. I have no idea!”

7. Too Many Genres
Maybe the core problem was the ampersand. Audiences love REESE’S Peanut Butter Cups as a concession stand treat but not as a governing philosophy: Westerns and space invaders are two great tastes that probably would have tasted better separately. The aforementioned Scott Pilgrim was worthy but doomed because no one could figure out how to market — or comprehend — a video-game/action/music/comic-book/slacker romance. The lesson: When dealing with high-stakes ideas — and nine-figure budgets — it’s probably best to focus. Unless one of the mash-up genres is comedy (a la the zombie comedies Shaun of the Dead and Zombieland). Comedy is the bacon of genres: It goes well with anything.

8. 2D
It wasn’t released in 3D. Everything else is, so who outside of Roger Ebert would have complained if C&A had padded its grosses a little with premium-ticket prices? Besides, the high-tech glasses might have allowed us to see Harrison Ford’s mailing it in more clearly. “My guess is that they didn’t want to spend the money to shoot it in 3D. And converting after the fact always looks like shit,” says our agent. “Also, Favreau is not a great visual director and he probably would have been out of his depth.”

9. A Bad Poster
C&A‘s first poster featured a glowering, alien-bracelet-wearing Daniel Craig and the tagline, “From the director of Iron Man.” “That tells me nothing,” says a publicist. “If guys are this movie’s target audience, how do you not have a poster with Olivia Wilde looking hot? They overestimated Daniel Craig’s star power. If they’d wanted to go that route, the poster should have said, ‘James Bond in Cowboys & Aliens.'”

10. A Bad Movie
Could be! “Cowboys & Aliens bombed because it was a shitty movie,” says the agent. “At the end of the day, that is usually the no. 1 reason summer tentpoles bomb.”

The Fallout: Who Will Cowboys & Aliens Hurt?

Harrison Ford
He’ll survive Cowboys & Aliens, and not just because was barely invested in it: “He’s long past being someone Hollywood thinks carries movies,” says our agent. “His name won’t get a movie green-lighted. He’ll show up in movies where he’s a good creative choice and that’s it.”

Daniel Craig
“He seems to be following the long line of James Bonds who can’t carry a movie outside of the franchise,” says the agent. “He does have The Girl With the Dragon Tattoo coming, which should be huge. But it remains to be seen how much credit he gets for that, given that it’s based on a massive, worldwide best-seller.” But, asks the producer, “can we really be sad for a guy who goes back and forth between being married to Rachel Weisz and playing James Bond?”

Olivia Wilde
She emerged unscathed from last year’s disappointing Tron: Legacy, and our experts think she’ll be OK this time, too: “After that Sunday New York Times feature last weekend, she’s got at least six months’ worth of ‘Get Out of Jail Free’ cards,” says the producer. And she can thank her thankless role for one thing: “She was the ‘girl’ in the movie,” says our agent. “Even if it had been a hit, it wouldn’t have helped her much. It might have made people more aware of her, but that’s it. Her career will be defined by what she does from here.”

Jon Favreau
“It hurts him a bit, but he’ll keep getting more shots,” says the agent. “All he has to do is say, ‘I’m in development on another Iron Man movie,'” says the publicist. “And everyone will forget all about Cowboys & Aliens because it would make a billion dollars.”

The Studios (DreamWorks, Imagine, Reliance, Relativity, and Universal)
“First of all, Cowboys & Aliens isn’t a HUGE flop,” says our producer. “The movie cost $165 million, and they’ll spend another $150 million to market it worldwide. So it probably needs to do $400 [million] to $500 million to break even. In this insane marketplace, where even unwatchable action movies make a fortune overseas, it’s conceivable.”

Our agent was slightly less optimistic: “No one will recoup their money this one. They will all lose money, but there were three financiers on it, so nobody will get killed. But it’s not good for DreamWorks. They promised Reliance big Amblin/Spielberg-type movies, and this was their first big one up. Next, they’ll have The Help — which is small but good, I hear — and Fright Night, which is supposed to be a disaster. Watch Real Steel in October. There will be a lot of pressure to make that one work.”

Comic-Con
Studios had a reduced presence in Hall H this year after Comic-Con hits such as Scott Pilgrim and Tron: Legacy failed at the box office. Does Cowboys & Aliens — which had its much-hyped premiere at the festival two weeks ago — further damage Comic-Con’s reputation as a barometer for mainstream tastes? “Who will want to premiere their movie at Comic-Con after this?” wonders the agent. “Screening a movie at Comic-Con is like not having sex for a while, then paying a hooker,” says the publicist. “You get your mojo back, but does that mean anything in the real world?”

Other Tentpoles
Lest you were actually worried, fear not: Cowboys & Aliens will not mean the end of big-studio schlock. “I don’t think this will have any effect on the number of tentpoles released,” says the agent. “From a genre standpoint, the only thing this will teach them is to stay away from Westerns, which historically have not been big at the box office. But they’ll keep making big movies, because that’s the only place where studios make money these days.”

Previously from Andy Greenwald:
Julianne Moore’s 11 Most Adulterous Performances
See the Planet of the Apes Clip That Will Finally Win Andy Serkis an Oscar
What Does Christopher Nolan Have Against Buildings?