Taste the Rainbow: The Mouthwatering Colors of ‘Big Hero 6’ 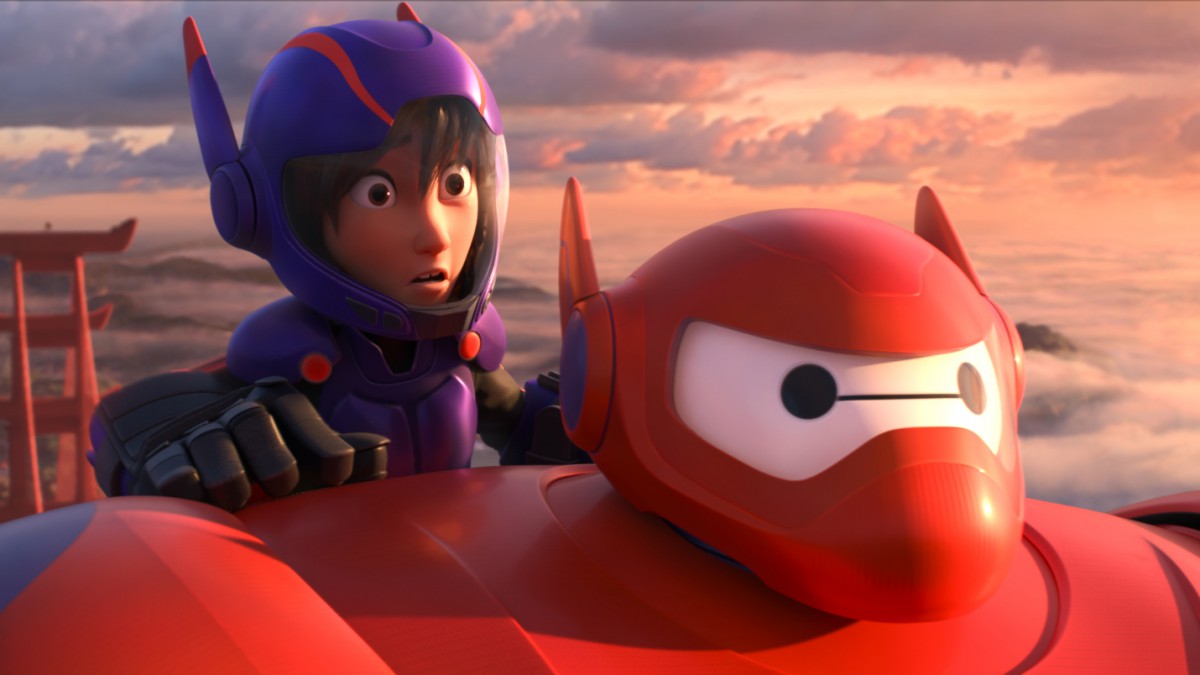 What’s the word for the experience of being overwhelmed by one sense so intensely that it makes your other senses jealous? The aroma of coffee can make you mad that it’s rarely how coffee tastes. This is the exasperating exhilaration of a certain state-of-the-art, mass-market animation: You want to eat it and you can’t.

I’m not talking about Ratatouille, which is set in kitchens and features long stretches of cheese and vegetables and sauce. And I’m not not talking about it because the food is co-cooked by a rat. The meals in Ratatouille look perfectly real and edible. I mean movies like Bolt and two installments of Rio and parts of Despicable Me, movies that don’t need to be about food because they are food. This is the particular, miserable bliss of Big Hero 6, a movie so slick-looking and richly glazed that it’s weird of Disney not to serve it on a plate.

Coloring in animated movies has reached a place beyond conventional realness. It’s in a hyper-sensory realm. Merely watching Big Hero 6 feels inadequate. It does something synesthetic. It’s true that I didn’t see it in 3-D, but I’m not sure getting closer to the images would have kept me from trying to leap through the screen. This movie is so energetically fulgent and steroidally sweet that watching it is basically like losing your mind in the drug-store candy aisle. You want to lick the light and bite fake plastic and metal. (This must be what it’s like for kids to stand in front of a Jeff Koons.) I don’t know whether scientists have found a correlation between films that look like this and children’s addiction to them. But The Lego Movie looks like a galaxy of hard candy and happens to have grossed a zillion dollars. There are movies that treat you like a toddler and movies that reduce you to one. Big Hero 6 is the latter. You want to shove the whole thing in your mouth.

The superhero story here comes from a Marvel comic book that has been rejiggered to pluck emotional chords. This version is a dramatic comedy about a 14-year-old science genius named Hiro Hamada (Ryan Potter) who loses his big brother, Tadashi (Daniel Henney), in a fire and winds up forming a costumed collective to chase a bad guy all over the city of San Fransokyo. The collective is aided by a big white health care robot named Baymax that Tadashi invented and Hiro perfected. Some of the pleasure in the movie comes from the high standards of verisimilitude that movie animators set for themselves. Baymax speaks with the kind mildness of Scott Adsit’s voice and looks like a blob of inflated dessert. The animators have found the right light to reflect all of the balloon character’s synthetic surfaces, fashioning an illusion of featherweight density that is also believably matte. Your fingers want to feel it.

It’s easier to like this movie because of the casual, low stakes of the enterprise. Big Hero 6 was directed by Don Hall and Chris Williams from a script credited to Robert L. Baird, Dan Gerson, and Jordan Roberts, and produced by John Lasseter, and none of them is trying to reinvent anything here. The themes of death and loss are the dramatic centerpiece, but they don’t overwhelm the movie. There’s a moment of altruism near the climax that might get to you, but you’ve probably been more reliant on Kleenex at other animated movies. The movie is not a tragedy. It’s a decent action-adventure that makes you fall deeply in love with an instrument of good health. The real fantasy here is reducing insurance premiums and curbing awful infectious diseases.

It’s possible to see a subplot involving a wormhole, a father, and a daughter and to think about Interstellar, though Big Hero 6 is certainly the zippier movie. They do share a belief in science’s power to improve lives. But Big Hero 6 doesn’t need to use alarmism to justify that belief. Its agenda lies elsewhere. The saturation of color extends to the ideas of race and ethnicity. San Fransokyo is piquantly Asian: the props, costumes, architecture, and characters; the pagodas and Kabuki masks and comic use of a Kaiju Big Battel getup as a crime-fighting outfit. If this movie is making a point, it’s profound for being ancillary: Asians do stuff, too. The five-nerd team Hiro puts together has just one white guy, voiced by T. J. Miller sounding like a stoner. The rest of the gang is made up of two women and a black guy named Wasabi. Their voices belong to actors of color (Jamie Chung, Genesis Rodriguez, and Damon Wayans Jr.). The filmmakers know that these shifts in perspective are a big deal, but they’ve concocted a world that obviates a word like “multicultural.” Multicultural just describes culture.

The filmmakers are more interested in using color to make more visceral evocations. Instead of race, what you think of is actual color. The villain rides around San Fransokyo on millions of little black “microbots” that Hiro invented and the villain stole. Strung together, they become gushing licorice. Which makes you wonder: Does Baymax offer dental?

Backdoor Cover: The Last-Minute Resurrection of 'New Girl' and 'The Mindy Project'