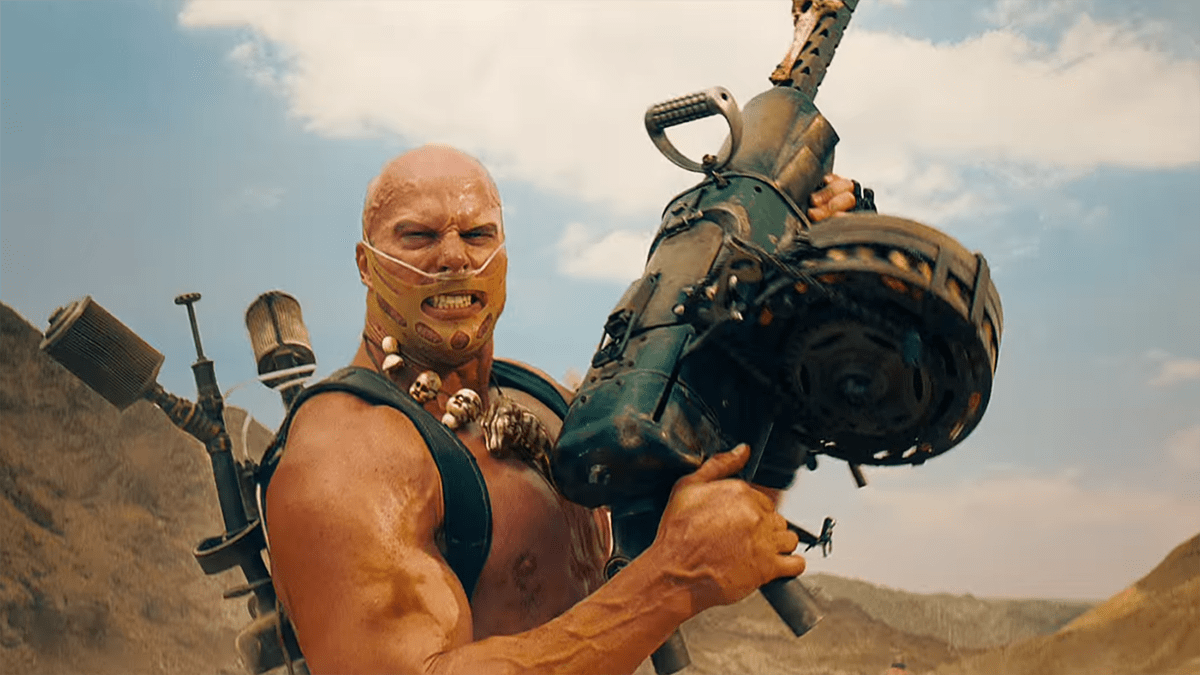 Amid all the glorious blood and thunder of Mad Max: Fury Road, there are a few moments of genuine pathos. And the one that sticks with me the most is Rictus Erectus, the terrifyingly huge and tragically simpleminded son of lead villain Immortan Joe, bellowing about his baby brother to his father’s assembled vehicular mass. The weight of that moment comes from the character’s story: Rictus is a physical powerhouse with unspecified mental problems, treated like dirt by his father for not being the “perfect” heir. But it also comes from the story of the actor playing him: Nathan Jones, a former convict and pro wrestler who has become an action-movie stalwart, a bald 7-foot muscle-beast who’s mostly just had to roar and throw people around in his cinematic career.

Fury Road auteur George Miller wrote Jones into the movie after seeing him do some motion-capture and stunt work on Justice League, the since-shelved comic-book adaptation that Miller spent years working on. In an email, Jones writes that Miller described the Rictus Erectus character to him as an “oversized big kid with a lack of maturity, which was a contradiction to my actual physicality — a hulking man with the mind of a child.”

In making the movie, Jones got to fire a comically huge machine gun from the roof of a monster truck. He got to fight Tom Hardy while riding on a speeding tractor-trailer. He got to join one of the greatest, deepest benches in recent action-movie history, taking his place in a crazily vivid bad-guy tableau that includes the guitar-flamethrowing Doof Warrior and the blind zealot Bullet Farmer. Partly because nobody was ever going to find a stuntman of his size and build, Jones did his own stunts in the movie, surviving a fall from a moving truck and a broken gas line that left him drenched in fuel. But his greatest triumph in the movie is that one quiet moment: a short scene in which a guy who’s spent his cinematic career roaring and throwing people gets a chance to step up and act. He nails it.

Jones’s journey to Fury Road took him from prison to international strongman competitions, WWE rings, and beautifully violent Thai martial arts films. After committing a string of armed robberies in Australia, a 17-year-old Jones was sentenced to 12 years in prison. He served eight. “Boggo Road was known as the most dangerous prison in Australia then,” Jones remembers. “It’s knocked down and demolished now, due to its condition and treatment being so severe and inhumane. It was built over 100 years ago, but now it’s just a memory.”1

By the time Jones was released, he was a towering wall of muscle, and he immediately set about winning power-lifting competitions in Australia. He entered World’s Strongest Man contests, but Jones ended that part of his career shortly after the Swedish powerhouse Magnus Samuelsson broke his arm during a televised arm-wrestling match. Jones then tried his hand in the nascent MMA world, fighting the former sumo champion Koji Kitao in the first event ever put on by the Japanese company Pride. During the match, Jones made a couple of errors and ended up tapping out to an armlock after a few minutes. The English-language announcers just tore him apart. It would be his final MMA match. Jones says that the fight was fixed (something that Pride was notorious for) and the organization had promised to give him real fights afterward. It never did, and he calls the moment “a real sore point in my life.”

The strongman competitions and the MMA didn’t work out for Jones, but they did lead to something more valuable: Jackie Chan caught one of Jones’s feats of strength on TV: “He had seen me pick up the back of a Holden Ute, walking it down the street like it was nothing.” Chan cast Jones as a heavy in his 1996 movie First Strike. And while the younger, pre-baldness Jones wasn’t quite the intimidating specimen he’d become, he still left an impression.

But Jones was only dabbling in acting, and after taking a couple of roles, Jones moved on to the almost-like-acting world of pro wrestling. Starting in 2001, Jones wrestled for a few smaller promotions in Australia and Japan. And then, inevitably, the WWE came calling. He was too huge and impressive-looking to end up anywhere else. Jones made his debut in 2003 as a protégé of the Undertaker. The company’s writers used his time in prison as a character hook, and that meant we got a lot of backstage skits like this:

All this was supposed to build to a tag-team match at WrestleMania, with Undertaker and Jones taking on the Big Show and A-Train. But Jones was still new to pro wrestling and not ready for a match of that magnitude. Instead, the story line changed: The bad guys laid Jones out backstage, leaving Undertaker to successfully face both heels by himself. After that, Jones disappeared from WWE TV for a few months. When he came back, he and fellow giant Matt Morgan became the new pet monsters of Paul Heyman, then Brock Lesnar’s manager. They both joined Lesnar’s Survivor Series team, losing a tag-team match to a team captained by Kurt Angle. A few weeks later, Jones was gone from the company, this time for good.

Jones never reached his potential as a wrestler, though maybe he would’ve put the pieces together if he’d stayed with the WWE for longer. He was born at the wrong time. In the ’80s or early ’90s, he would’ve made a great monster heel, the sort of freaky-scary bad guy who would menace everyone in the WWF before being fed to Hulk Hogan. But in an era of seasoned, fluid athletes like Angle and Lesnar, Jones looked slow and tentative. He didn’t wrestle a single great match in his time with WWE. But if Jones didn’t quite work as a wrestler, he was a powerful presence, glowering and grinning maniacally and coming across as a legitimate psychopath. Jones didn’t have to work to develop that side of himself: “I remember [legendary wrestling tough guy and WWE road agent] Arn Anderson telling me I had a natural instinct and just to trust my gut and go with it.”

He brought that intensity with him when he returned to movies. He acknowledges that he has a stock character: “My stereotyped roles continue having me cast for action fight films as the antagonist and neighborhood baddie.” But he’s great at that character. Some of those roles aren’t particularly meaty. His first post-wrestling movie was the 2004 Homeric epic Troy. There, he’s pretty much a punch line, stomping onscreen to bellow wordlessly and hurl spears before Brad Pitt’s Achilles can run up and stab him in the neck.

But when Jones actually gets to fight onscreen, he’s breathtaking. A remarkably spry screen fighter, he’s faster and more confident on his feet than his WWE work might lead you to believe. And as a presence in Asia’s always-booming action-movie industry, he’s had the chance to do some very cool things. Jones has a great fight against Jet Li in 2006’s Fearless; as the English boxer Hercules O’Brien, everything he does feels like a larger-than-life parody of Western pro wrestling. In 2008, Jones starred in an incredibly broad and goofy Thai action-comedy called Muay Thai Giant, kicking a plane in half at one point. And until Fury Road, Jones had his greatest onscreen moment in the brutal six-minute throwdown against Thai martial-arts icon Tony Jaa that ends the 2005 movie The Protector. In that fight, Jones rips the head off a stone lion statue and throws it at Jaa. Ultimately, Jaa has to tie elephant bones to his forearms to beat Jones. It’s awesome.

Jaa’s blows always look absurdly painful, and Jones says that “there was a lot of physical contact” during filming. “I don’t mind the hits and pain, as long as I can walk away afterwards. … Actually, I recall Tony Jaa complaining that his elbow hurt after pounding away at my thick skull.” The visual of the titanic Jones staring down the diminutive Jaa is one of the greatest images from The Protector, one of the best action B-movies to come along this century. And in a movie without a huge budget, Jones is practically a special effect unto himself.

Fury Road might not be a low-budget movie, but for much of his time onscreen, Jones serves a physical function, operating as a massive engine of intimidation. But he’s hoping that his moments of real, genuine acting will lead to roles outside the action-movie ghetto in the future. Still, he’s working with what he has. He’s filmed a few horror movies lately, and he’s excited about his role as a psycho killer in the Australian thriller Charlie’s Farm. He says he’s got ambitions of becoming “Australia’s first real iconic slasher.” Right now, he’s in Thailand, filming Never Back Down 3 with the straight-to-DVD action star Michael Jai White, and he might star alongside another action B-movie great, the British martial artist Scott Adkins, in Undisputed 4. He may expand beyond onscreen brawlers, but action movies need guys like Jones: a flesh-and-blood specimen more intimidating than any CGI creation.

Tom Breihan (@tombreihan) is the senior editor of Stereogum.

Whose Fault Is This? Learning to Like the Mega-quakes in ‘San Andreas’ and the Sloppiness of ‘Aloha’