Attention, Delayed ‘Flight of the Navigator’ Remake: ‘Explorers’ 2.0 Is Coming for You 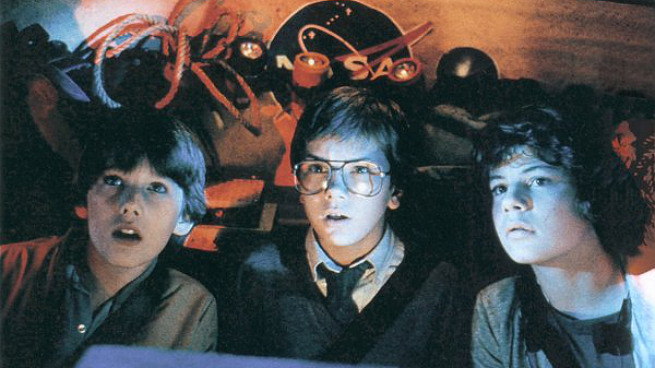 Man, Flight of the Navigator remake, you need to get it together! You’ve been hanging out in development for going on five years, and now a second pass at the cult classic Explorers is coming for your spot. Just yesterday, The Hollywood Reporter broke the news and my immediate concern was for you, Navigator: Two-thirds of Explorers’ original young stars were Ethan Hawke and River Phoenix (the remaining third was Jason Presson), and it had a glamour factor you lacked (no offense, Joey Cramer). It opened one year before you did, though you hung around waiting for studio approval for two. You won at the box office, though, making nearly twice what Explorers did, but some of that is due to the fact that everyone was at home watching the Live Aid concert during Explorers’ opening weekend. But you should worry anyway, Navigator, because Explorers has the potential to be a pretty good remake, and you’re losing steam here.

Explorers should have been better than it was. The concept is interesting enough: Ben (Ethan Hawke) has a weird dream involving space travel, so his genius friend Wolfgang (River Phoenix, sometimes wearing a tiny lab coat) builds a computer program based on it; the dream enters the computer, the computer spits out a flying bubble, and — joined by Jason Presson — they create a ramshackle spacecraft out of a Tilt-A-Whirl and some other garbagey things, name it Thunder Road, and fly it off to space. It seemed somehow instructional, as though you could use it to design your own craft out of batteries and inflatable kiddie pools. The heroes were more fleshed-out than Navigator’s was, somehow, and even then they obviously had star power. And they do meet aliens, but they weren’t half as cute as yours, Navigator:

…Which is kind of funny, considered that Explorers was directed by Joe Dante just after he completed Gremlins, which tops both of you in the cute fake animal department (honorable mention to another finger puppet from the ’80s that you looked for at Petland Discounts, the worm from Labyrinth). Dante wasn’t Explorers’ problem: He and writer Eric Luke were forced to complete the script while shooting the project, and the studio pressured them to do so quickly, as well as inching up the premiere before editing was completed, which left a lot of important footage out of the final product. Though the weird latter portion of the movie doesn’t really match the rest of it, its goofy, vintage-TV-addicted young aliens are memorable on their own. (Dante explored that theme, though cloaked in a very different and sinister vibe, for “It’s a Good Life,” his segment in the Twilight Zone movie in which a demonic child terrorizes his family by, among other means, playing cartoons on every TV in the house.) Navigator, imagine if Dante and Luke had time to work it all out. You might have been erased from memory, and all of those days home from school sick with a fever that you and I spent together might have been interrupted by my dates with baby Ethan Hawke instead of being discovered years later in the “cult hit” section. Maybe I would have even taped a couple of episodes of Simon & Simon right over your ass. I don’t even want to think about it.

The new Explorers is being produced by André Nemec and Josh Appelbaum (Mission: Impossible — Ghost Protocol) and written by David Posamentier and Geoff Moore (who both wrote and directed Better Living Through Chemistry, opening this weekend), though no director has been set yet. The Hollywood Reporter mentions “an insider said one template [for Explorers] could be in the tone of Welcome to Yesterday, an upcoming movie produced by Michael Bay’s Platinum Dunes and directed by Dean Israelite that has been wowing execs at the studio. Yesterday revolves around teens who construct a time machine.” I hope you have access to inspiration that’s “wowing” people, Navigator. I hope that’s a priority for you.

Maybe you did too many things right the first time, Navigator. Maybe that’s why you haven’t updated me as to your whereabouts in more than a year, when Colin Trevorrow was assigned a script revamp (with Derek Connolly, who is not as big a fan of yours as Trevorrow is) from an existing 2009 draft written by Arrested Development’s Brad Copeland. Your original plot was airtight, hitting a serious fear center in any youngster’s brain: going home after falling in a ditch and discovering that your family is old (NO!) and that you’ve been abducted by aliens who mucked around with your brain without your consent; bonding with a pet your parents would never let you keep; going back on the ship and getting into a fight with an extraterrestrial;  and then — to top it off — having a big long schlep still ahead of you as you head home and figure out what year you’re going to exist in. It’s the universal childhood nightmare. But you also rocked out:

I have to tell you, Navigator, that there’s something about Explorers that was an unfulfilled promise, and there’s some gold in them thar hills. It begs to be tinkered with, fantasy-cast, and improved upon. Navigator, you’re going to have to get to work to compete. There’s only room for so many mid-’80s sci-fi reboots for children in the near future. You better start crafting those spectacular modern aliens before it’s too late.

Filed Under: Movies, Flight of the Navigator, Explorers