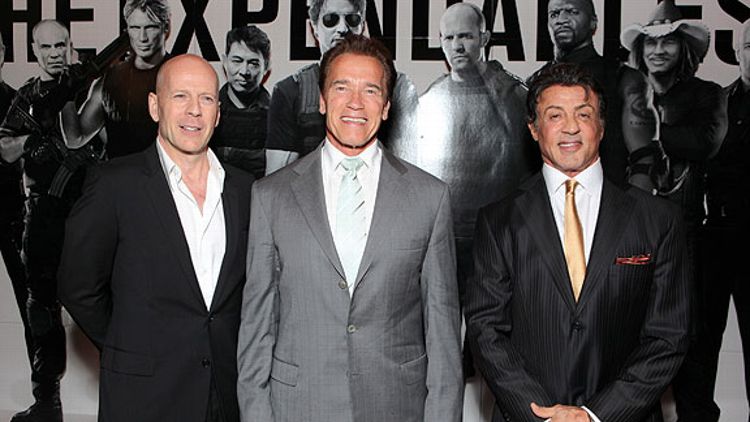 Bruce Willis and Arnold Schwarzenegger only had cameos in the first Expendables, and that movie made $275 million worldwide. But they’ve both signed on for “substantial” roles in the sequel (also returning, most likely: Jason Statham, Dolph Lundgren, Mickey Rourke, Terry Crews, and Jet Li), so expect The Expendables 2 to make $20 kajillion. Grade: B+ [Deadline]

Just as we requested, Eddie Murphy will indeed be the host of the Oscars this year (it was confirmed shortly after the rumor went out yesterday morning). In a statement, Murphy said “I am enormously honored to join the great list of past Academy Award hosts from Hope and Carson to Crystal, Martin and Goldberg, among others.” “Also, just to put the speculation to bed: Yes, I will be doing the entire telecast as Donkey from Shrek,” he did not add. Grade: A [Deadline]

Tim Roth has signed a production deal with 20th Century Fox, the studio behind his now-canceled series Lie to Me. Under the deal, Fox will develop a new show for Roth to star in; also, Roth can pitch the studio shows that he would executive produce but not necessarily act in. If Roth’s first pitch isn’t Mr. Orange: The Musical, then, well, we’ll be very disappointed in ol’ Tim. Grade: B [Deadline]

Yesterday, he was booked in the long-gestating adaptation of The Corrections. Today, Anthony Hopkins has another new gig: as John Clancy, an ex-doctor turned FBI employee — with psychic abilities! — chasing down a serial killer in the movie Solace. As every review of this movie will point out, Hopkins famously played serial killer Hannibal Lecter in Silence of the Lambs. Just as relevant here, in our opinion, if not as obviously so: Hopkins’ chilling voice work in How the Grinch Stole Christmas. Grade: C+ [Variety]

Fox canceled America’s Most Wanted in May, but it’s not dead yet: Female-focused network Lifetime, of all places, has picked it up for a 25th season. The only difference is that, this year, the thing America wants most is Manolo Blahniks. Grade: A [HR]

In a recent New York Times piece, Chris Tucker — who hasn’t acted since 2007’s Rush Hour 3 — promised he was reactivating his career. Now, Tucker is in talks for a role in David O. Russell’s The Silver Linings Playbook, starring Bradley Cooper as a high school teacher just out of a mental institution and working to reconcile with his wife. Tucker would play a reckless cop on a madcap adventure with a Chinese partner he may just grow to love. Grade: A [HR]