April Book Recommendations: Farm to Table to Family to Kitchen 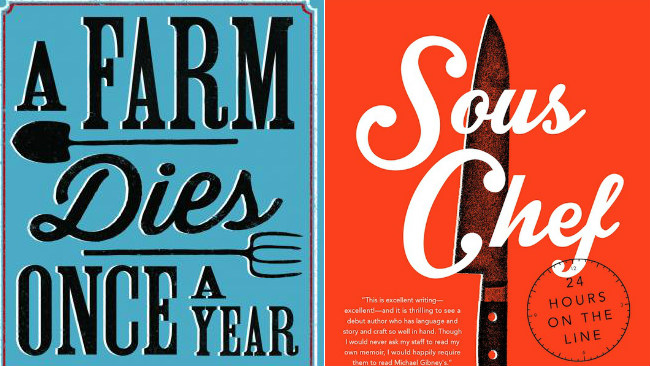 For anyone who has ever dreamed of being a chef, Sous Chef is an escapist fantasy. It’s a show-don’t-tell food memoir — and actually, “memoir” isn’t exactly the right way to describe the book’s unorthodox structure. Michael Gibney has compiled his years of experience as the second-in-command of a three-star restaurant in New York, playfully mashing up memoir and fiction. Sous Chef moves through a typical 24-hour day in Gibney’s life, from the early morning kitchen prep till close, and back again to the next day’s brunch shift.

I’ve only dipped in and out of shows like Top Chef and Hell’s Kitchen, but I think they have two appeals: one is the behind-the-scenes glimpse into the kitchen, and the other is a fascination with the dexterity and culinary athleticism of chefs. Sous Chef does both of these things. Told in the second person (surprisingly not annoying!), Gibney puts “you” in the shoes of a chef — shoes that are specially made black clogs designed to “reduce joint and back pressure.” It’s hokey, but kind of like the Star Tours ride at Disneyland, the whole thing sort of charms you.

It’s a tremendous feat Gibney is undertaking here: to represent the everyday, but give it the weight of something exceptional. Gibney’s got writing chops (an MFA from Columbia, for starters) and an ear for whirlwind storytelling. Sous Chef charges ahead with a sense of urgency — driven by the stress of the dinner rush and the adeptness with which Gibney and the rest of the kitchen staff must execute every dish with finesse and perfection. The pleasures of reading Sous Chef are propelled by a sort of kinesthetic joy, one that, combined with Gibney’s rich detail of the kitchen’s culinary intricacies and personnel politics, makes for a totally immersive read.

Given how close Gibney is to the material, a few things come out that aren’t explicitly stated. The sense of camaraderie the cooks feel together makes the kitchen feel like a boys’ club. The absence of women isn’t directly acknowledged, but only a couple of the female names that surface in the book belong to people in the kitchen. I wish Gibney would’ve shown more awareness of this problem rather than succumbed to the celebratory bro-fest in the last few chapters.

But by the end, when Gibney and his friends are discussing the existential reasons for being a chef — “What are we here for? As cooks, I mean, what are we here to do?” — the self-congratulatory answers don’t even seem ridiculous. (“Cooking is altruism … There is honor in it.”) They’re drunk by this point, but Sous Chef will leave you feeling intoxicated by its own romantic portrayal of the kitchen.

A less starry-eyed but equally good food-related memoir is Arlo Crawford’s A Farm Dies Once a Year. At age 31, Crawford decided to leave his busy but aimless life in Boston to return to his family’s 95-acre vegetable farm in central Pennsylvania. Still, the book is less about the intricacies of farm life (though it does have many delightful details) and more about Crawford’s relationship with his home. I’ll be honest: When I first heard the concept of the book — a city guy drops everything to work on a farm — I thought I could see all the beats coming. He’d learn to appreciate working with his hands, do honest work, become one with the land or some bullshit.

Crawford is less interested in quaint, bucolic moments (though there are some good ones) and more interested in the farm lifestyle itself — its daily rhythms, its seasonal peaks and valleys. A Farm Dies Once a Year is a meditation on the patience and will it takes to live off the land.

As the book’s very clever title might suggest, Crawford dips into some dark arenas. His family’s farm is unconventional, one that thrives somewhat comfortably off its 100 varieties of fruits and vegetables. It highlights a class difference between the Crawfords and their poorer neighbors. The murder of a neighbor when Crawford was 12 becomes the focal point for several flashbacks, as the author attempts to make sense of the violence in his adult life.

Still, at the heart of A Farm Dies Once a Year is Crawford’s relationship with his father. He functions partly as a paternal everyman — tough, reserved, secretly loving — but so much of their interactions are specific and often moving. Crawford struggles to understand his father’s temper, which can be as volatile as overreacting to an unaccounted for box of veggies. (“This life was his, not mine, and it wasn’t my place to tell him that he shouldn’t care so much about a missing box of beans.”)

Just as important is what the farm means to his family, how their relationship to the land is a mutual one. Crawford writes, “There had been years when the farm made almost no money at all and years when it had been flush … [My parents] weren’t rich, not by any stretch, but the business was strong enough now that it wasn’t in constant danger of being snuffed out. The farm would tend to itself one way or another.”

If there’s a simple truth at the center of Crawford’s memoir, it’s that some years are better than others. Accepting that fact is harder than it seems.

Passes the Test: “Empathy requires knowing you know nothing. Empathy means acknowledging a horizon of context that extends perpetually beyond what you can see.” If there’s a better couple of sentences published in 2014 about human nature, I’ve yet to see them. The Empathy Exams, Leslie Jamison’s stunning first essay collection, looks at the nature of caring and kindness through a series of diverse personal essays. In the title essay, Jamison plays a medical actor who must feign scripted illnesses so med students can practice diagnosing patients. In another essay, Jamison gets punched in the face during a mugging. Another piece visits Ciudad Juárez, the Mexican city where hundreds of women have been murdered since the early ’90s.

The range of The Empathy Exams recalls John Jeremiah Sullivan; Jamison’s vulnerability evokes a less sentimental Cheryl Strayed. (Although Jamison’s essay “In Defense of Saccharin(e)” would argue that there’s nothing wrong with sentimentality.) In that opening essay, Jamison says, “I believe in intention and I believe in work.” The intention is certainly there, and the work is astounding.

Paradise Lost: Like Peter Matthiessen himself, In Paradise is deliberately old-fashioned. It’s contemplative and moving, and in its haunting story of Holocaust survivors who revisit Auschwitz, we find one of the last century’s greatest authors penning a book worthy of his legacy. The trip, led by an American academic named Clements Olin, begins as a research project to understand why a surviving writer committed suicide at the age of 28. But even as a non-Jew, Olin finds that he is more connected to the experience than he first thought. In Paradise is moody and atmospheric, but not without its glimpses of levity (most notably, a spontaneous moment of dancing in the street). Still, Matthiessen maintains a muted tone. He asks the reader to fill in those gaps, to give as much as he gives. And in these brief 200-something pages, Matthiessen gives so much.

Don’t Ask, Do Tell: Topics discussed in The Harm in Asking: living in New York, lying about diabetes, roommates, not getting tattoos, Tori Amos’s Little Earthquakes, family, “controversial” racism, being an amateur pimp, etc. In her second autobiographical book of essays, comedian Sara Barron broaches a number of topics, designed to entertain readers by embarrassing herself. Fans of the This American Life–style of personal narrative will find a lot to like here. (Barron’s work has appeared on the NPR program, and she also hosts The Moth regularly.) Barron is a bit like a highbrow Chelsea Handler (I swear that’s a compliment), and she’s unafraid to confess things that are unflattering and often gross. These are the kinds of essays that jab regularly with laugh-out-loud gags that will sometimes floor you with a sentimental right hook.

Filed Under: Books, Recommendations, Kevin Nguyen, Sous Chef, A Farm Dies Once a Year, The Empathy Exams, In Paradise, The Harm in Asking