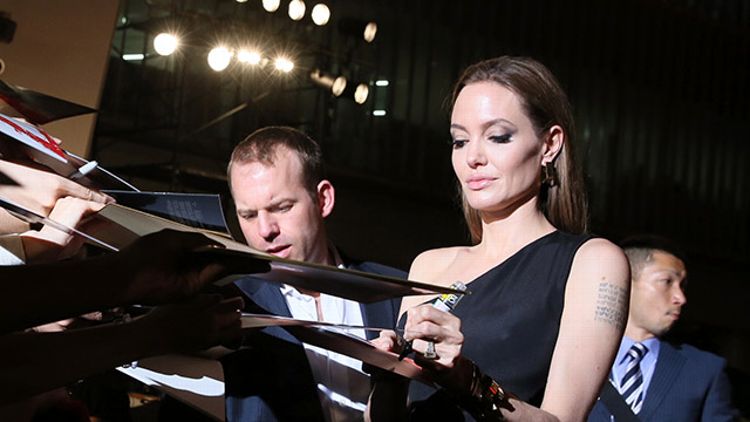 Angelina Jolie, who last appeared onscreen in 2010’s The Tourist (remember? With Johnny Depp? With whom she shared so little chemistry that “a microscope and a search party could not discover any trace of” it?), has topped Forbes’s list of this year’s highest-paid actresses, ranking 41st overall (Oprah, Lady Gaga, Steven Spielberg, Beyoncé, and Madonna were credited with the top five most powerful celebrity spots). Forbes cites Jolie’s “north of $15 million” salary for 2014’s Maleficent — her then-4-year-old daughter Vivienne Jolie-Pitt reportedly earned $3,000 a week for her role in the film — and $33 million in earnings between June of 2012 and last month, which places her more than $7 million ahead of the next highest-paid actress, Jennifer Lawrence.

Jolie’s Forbes title is accompanied by a few paragraphs about her “honest, controversial and very brave” New York Times op-ed about her double mastectomy, and no mention of the Kung Fu Panda movies, to which Jolie lent her voice in 2008 and 2011 (despite the fact that Kung Fu Panda 2 was her highest-grossing film). Her focus is shifting toward more off-camera roles these days as a humanitarian, director, and writer (she helmed 2011’s In the Land of Blood and Honey, and will direct Unbroken, which opens on Christmas 2014), which only serves to diversify her brand and make her seem like a more compelling personality; even when she disappears from sight to recuperate from surgery, her Wind Song stays on our minds. Her endorsement deal paychecks are astronomical, despite the fact that her presence can be a distraction from over-the-elbow leather gloves she’s selling. There’s something stern about her power ranking, serious and cold and regal. She seems to earn money simply by existing.

Jolie is no stranger to the Forbes list. She knocked Oprah out of the most powerful position in 2009 following Wanted, which grossed $340 million, and tied for the highest-paid actress position with Sarah Jessica Parker in 2011. This year, Oprah returned to the top of the 100 list, but that credit has been hard-won; Oprah’s efforts to resuscitate the OWN network come with the cost of having to talk with Andy Cohen and brandish her clout as much as possible. Beyoncé had a world tour and Lady Gaga has continued to self-publicize for her upcoming album ARTPOP and “unisex fragrance line” despite a hip injury, riding around in a fancy, attention-grabbing wheelchair.

Forbes once spilled ink comparing Jolie and Brad Pitt to Elizabeth Taylor and Richard Burton, but despite generous tabloid speculation, Pitt and Jolie are either very good at keeping their drama contained within the walls of their castle in the south of France, or just sitting around lamenting the state of the world and designing chairs without any notable bickering. The endless eight-year headline search for the fall of the house of Brangelina, a hunt that eventually was willing to settle for just a dangling bit of scaffolding or a broken window, has turned up little but manicured rows of adorable adopted children standing before the firmly locked door of a sturdy stone structure. What we know of Jolie at this point is exactly what she wants us to know, that prized feat of celebrity that’s even more impressive because she’s successfully diverted so much attention to the causes of her choice.

Jolie has become so influential, she’s like a black hole: The void left by her absence on the big screen only made her more massive. So much about her persona seems implausible — her beauty, her family, her past — that its easy to subconsciously assume she’s acting all the time, presenting us with a performance so skilled that we pretend to believe she’s a real person. Sherlock Holmes said that “the best way of successfully acting a part is to be it,” and though it doesn’t show up on her IMDb page, Jolie’s best and most successful credit has proven to be simply playing herself.

Handicapping The Bachelorette: The Crushing Heartbreak We've All Been Waiting For