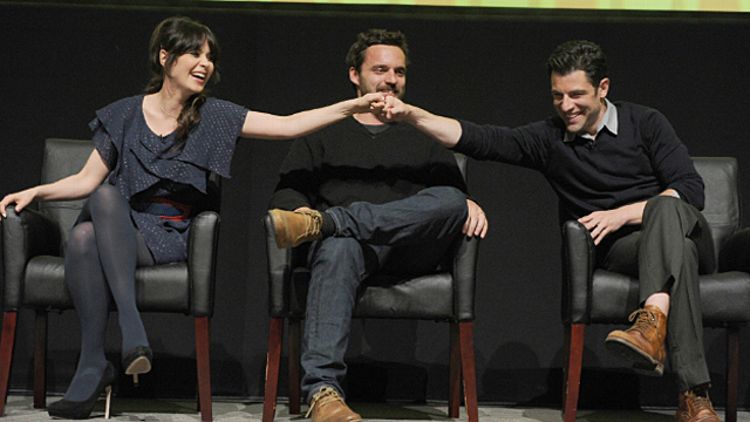 If Zooey Deschanel, and by extension, the Fox sitcom New Girl on which she stars, is the epitome of “Adorkable,” then the polar opposite would probably be a room of 20 moth-eaten TV reporters, turned loose in an elite club for an evening of schmoozing and chasing down all the free hors d’oeuvre they can find.

But last Thursday night worlds collided, as the show that brought the A-word to the masses invited a cadre of scribes to the Soho House in West Hollywood for a cocktail reception following a screening of the first-season finale. As Emmy season revs up, the streets and billboards of Los Angeles are filled with reminders of the wonders this year’s crop of shows have bestowed. The event was a timely chance to jog the reporters’ memory and appreciation of one of the most successful sitcom launches of the year.

Three of the show’s roommates mingled pre-screening with the reporters. In the third row, Hannah Simone, who plays resident bombshell Cece, was heard uttering the phrase “Schmidt’s nipples,” presumably in reference to the pectoral extremities of co-star Max Greenfield’s character. (The turn of phrase went unexplained despite queries from this reporter.)

The finale, when seen on the big screen, was surprisingly affecting. Revolving around the threat by one of the roommates to move in with his girlfriend, at points the episode came darn close to tear-jerking. The finale also demonstrated how the cast, who began as the broadest of post-millennial cutouts, have filled out into surprisingly complex characters. Seeing a show from a plush armchair in a screening room might make one take it more seriously than one might otherwise, but the episode rose to the august occasion.

As the lights came up, the show’s creator and executive producer, Liz Meriwether, beckoned everyone to follow her to the Club Room next door for “fancy hors d’oeuvre.”

It was no lie. The hors d’oeuvre were fancier than any of the humble TV reporters in attendance had any right to dream of. Short rib sliders, tiny little chicken Parmesans — all manner of shrunken appetizer wonders were brought forth.

I chatted with Meriwether in the Club Room. In a business where tyrannical showrunners have become Torquemadas of television, Meriwether is wonderfully approachable and unguarded. When I complimented her on the amount of emotion the show got out of the specter of a roommate’s possible move, Meriwether responded, “Yeah, it was maybe our most schmuck-baiting plotline.” She shrugged. “It’s a show about four roommates. I mean, clearly one of them isn’t going to move out.”

I pressed Meriwether about the show’s commitment to Adorkability. The term may well be the most successful marketing tool for a television show in history. But I wondered if she feared the backlash of a million animal-hatted girls in Williamsburg, who could be prepared to rise up if Jess deviated or developed beyond the living embodiment of all things alt.

“I never really have seen the character like that,” Meriwether replied. (Pressed further, she admitted she has never quite been in love with the word Adorkable. “Yeah, sometimes I hate it,” she said.) She denied wanting to create a generational touchstone as much as she wanted to tell a story about a group of characters that she saw as real. Referring to the initial zeitgeisty outlines, she quoted another writer who told her that sometimes a show’s pitch is like a Trojan horse; “You have to create something really broad to get into the gates but once you’re through, you can start to do something interesting.”

A few feet away, exerting the self-restraint of medieval flagellant, star Max Greenfield waved away round after round of hors d’oeuvre to chat with a group of reporters. His character has perhaps been the biggest surprise of the season, and I asked how he managed to evolve Schmidt from a narcissistic bodybuilder into a fragile, complex character whose bravado barely papers over deep wounds. Highly unusual for a sitcom star, he gave credit not only to the writers but to the first season’s directors. TV directors are widely overlooked in what is often thought of as a writer’s medium, but Greenfield explained that the lineup of directors who helmed New Girl’s first season (including big-screen veterans Jake Kasdan, Jesse Peretz, and Peyton Reed) actually provided enormous guidance to the cast.

“I try not to say ‘no,’ he explained. “And I try not to assume that just because I’ve spent more time with this character, I know more about it than someone who has spent weeks prepping and thinking about this one script.”

As the light faded on the Sunset Strip below, a final round of yogurt parfaits signaled the end of the evening. New Girl had survived its date with the press corps. Next up: the Academy — and with any luck, a victorious fall return with an Emmy or two under its vintage macramé belt.