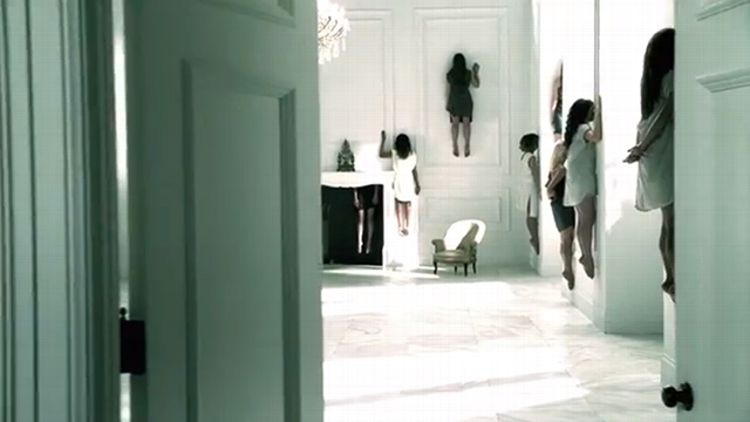 Yesterday a new trailer was released for American Horror Story: Coven, the third season of the show I live to recap. It’s brief and spooky, as teasers are meant to be, and features roughly half a dozen women in nightshirts stuck to the walls of a stark white room with a big chandelier. A white cat chills in a corner, and in the center of the back wall is a black fireplace with a (Siddhartha?) statue placed on the mantle. It’s set to a creepy cover of “The House of the Rising Sun” by Lauren O’Connell. Co-creator Ryan Murphy recently revealed that Coven, set in New Orleans, will tell the story of the “centuries-long feud” between Salem-style witches and voodoo witches. Murphy compared his old-school Wiccans to “any minority group that has been persecuted and has had to go underground and, finally, is like, ‘You know what? Damn it, no. We’re fighting back.'”

“Witch” remains a gendered term. Eighty-five percent of the people executed during the witch-hunting movement, which began in Europe, were women. The theory that it stemmed from the patriarchy worrying over a counterculture empowerment agenda is a fairly easy sell. Concerned by the emergence of female religious figures and healers (like midwives), the old guard sought to saw the rungs off the power ladder by nurturing the fast-brewing mass hysteria. In February, reports emerged that women in Papua New Guinea were killed after being accused of witchery, their attackers motivated either by greed (kill a witch, grab her land) or the need for a scapegoat when something terrible occurred, like the death of a child. The idea of the wicked, Satan-friendly witch is, of course, a whole different can of brew than our real, modern-day Wiccans. Who would want to violently oppose a group that mostly practices “white magic” and whose chief activities include meditating and soaking in baths among floes of rose petals and attraction oil? Very few. That’s not to say Wiccans don’t have to deal with prejudice, but the inspiration for hour-long dramas and horror miniseries doesn’t come from members of the religious sect. The witch of our imaginations is as defined by her nasty self-serving spells as it is by the way we view her. The witch trials turned a mirror on society and showed just how weird and malicious it could be, how paranoid and volatile when threatened.

The witch trials seem like a particularly timely muse considering that the term “witch hunt” was tossed around to describe Reddit’s gaffe following the Boston bombings, when commenters inaccurately identified the suspect during a particularly fevered session of Internet speculation. Salem’s trials were like the first viral sensation gone wrong, misinformation spreading rampantly as fact and leading to tragic consequences. We worry that the future of Internet discourse will destroy our children, that they’ll be done in by their own ability to influence the world around them if they act recklessly. The Castevets plotted to hijack Rosemary’s baby, but it was his own inherent evil that presented the true threat. As privacy declines, our every action has the potential to ruin us, and that power has almost supernatural properties when compared with our undocumented cute and quaint recent past. It’s terrifying to consider what would happen if the witch trials played out on message boards today.

Besides Coven, WGN America is planning to offer witch-themed Salem, its first scripted series. The one-hour drama debuts in 2014 and “explores what really fueled the town’s infamous witch trials,” with dashes of supernatural forces and romance thrown in for good measure. Not to be outdone, Lifetime is adapting Witches of East End, the story of immortal, closeted witches in current-day Long Island. The CW includes a witch in its character roster for its upcoming The Originals. It appears that the vampires and zombies have been cleared from the sale racks and stashed back in a dark basement for some future Halloween. In 2009, the New York Times suggested the current incarnation of the vampire trend was a result of anxiety over government conspiracy theories, the secrets that were being kept from us. The more recent zombie fascination (which may be on its way out) was allegedly tied to a national sense of disempowerment and — stay with me here — a sudden need to invoke the undead in order to cope with the aftermath of World War II.

The reason so many witches will be cackling in our living rooms this fall may be that we’re entering into a period in which we confront the possible consequences of wielding our own power, secretly fearing what will happen when we actually get what we want. Witch hunts often begin with misguided yet somehow good intentions, a half-baked idea that transforms to irrefutable fact; and though sometimes the Internet justice system is effective, it’s almost as frequently a dangerous tool. We haven’t quite gotten the hang of the Golden Rule (harm to none, so be it done, so mote it be), but if our nightmares — as predicted by television, the great psychic calibrator — are any indication, what we fear most right now is ourselves.

Q&A With The Canyons’ Paul Schrader: ‘I Said, "They Have Your Obit on Speed Dial, Lindsay!"’