Afternoon Links: Donald Glover on Girls, an Overcaffeinated Aniston, and Back to the Future’s Terrible Newspaper 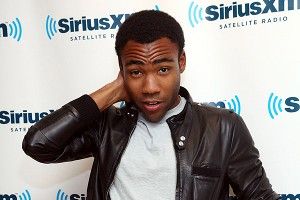 • The second season of Girls begins January 13, which the entire world already knows is also my birthday. As a gift (I assume), Donald Glover has been cast as [SPOILER ALERT] Hannah Horvath’s Republican boyfriend. I love the Childish Gambino! I grant you permission to celebrate my life by watching Dunham’s 2009 web series “Delusional Downtown Divas” in its entirety while eating cupcakes in the shower and thinking about how shiny my hair has remained into my old age on this very special day. Prop that laptop right on a washcloth on the edge of the tub and bond with some friends, maybe let your boyfriend pee on you a little bit. Listen to Red where nobody can judge you, perhaps. It’s a national holiday. Anything goes.

• The Central Perk servant has become the master: Jennifer Aniston in this Sky broadband commercial compels me to mentally cast her in my imaginary film adaptation of Too Much Coffee Man.

• A great, detailed takedown of Back to the Future’s local newspaper.

• Really, Mama? It seems like mayo would be right up your alley. June Shannon, apparently, isn’t alone in her fear of mayonnaise: “I can’t let my roommate have it in the house because I fear it might get on me and then I might accidentally ingest it,” “I make my fiance keep it in a brown paper bag in our refrigerator,” “Some people think I’m play’n … but once they get to know me they see otherwise.” I have a friend who played a cruel joke on her buddy in junior high by telling her that mayonnaise facials would clear her acne if she slathered it on her face and left it on overnight. Feel free to use that on anybody you don’t like. It’s an effective punishment for almost anything. Me, I’m saving my phobia for Subway’s “Creamy Sriracha Sauce.”

• This “salacious” photo of Princess Diana is probably not what you hoped it would be. Maybe Ski Bob sweater guy wasn’t wearing any pants?

• Depending on where you work and how much your colleagues respect you, you may want to save this video of a monkey using a toilet like a human for when you get home and you’re enjoying some me time.

• It is imperative that someone solve this riddle conclusively: Which NYC-based chef “had to fart on everyone that works for [him], and write it all in a log book so that [he] can keep track”? I care more about this than I do about most things. Seriously. Fatty Crab? Babbo? I’m never eating anything ever again.

Trailers of the Week: This Is the End, Turbo, The Place Beyond the Pines, and More