A Universe of Things: Down the 3-D Printing Rabbit Hole 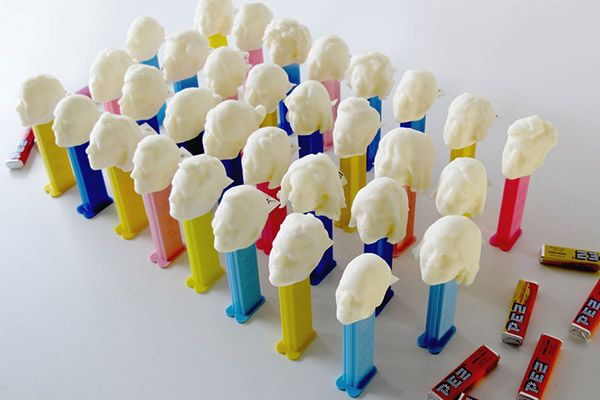 Late at night, several years ago, Molly Lambert sent me a Gchat about the Internet of Things. The Internet of Things is a topic best discussed late at night, but at the same time, I found it impossible to wrap my head around a definition that included words like “petabytes” and “RFID” and phrases such as “end-user agreements” and “cyberobjects […] considered as autonomous actors of the value chains they are involved in.” I stayed up long after she signed off, thinking about the concept of “things.”

There were promises that the Internet of Things would revolutionize the world so that “you are no longer alone, anywhere,” so I was mildly disappointed to find the IoT was not a revolutionary scientific breakthrough that would harness the power of thousands of disenfranchised fax machines and singing modems to make whatever we see on the web tangible and real, but rather a plan to assign radio tags or bar codes to objects and people in order to track them and gather information. I don’t mean to diminish the Internet of Things. It would probably be transformative in ways that are more significant than being able to touch the whiskers of a baby walrus or gather your MP3s in a box: waste reduction, better security systems, more effectively planned and enjoyably connected urban communities, blah blah blah. It’s also scary, because being slapped with a bar code would mean that you would be thrust into a state of Radical Honesty that would broadcast your formerly private actions to a database somewhere; it’s got to be a little unnerving for the database, too, which would suddenly find itself living the plot of What Women Want.

Anyway, I realized some time later that what I had wanted the Internet of Things to be was a 3-D printer. In many ways, they’re opposites: The intent of the IoT would be to make items and objects more useful, less expendable, and to catalogue their purpose under the assumption that everything has one. 3-D printers exist to make stuff, and they rely on your conscience to dictate exactly what stuff they spit out. Obviously, 3-D printers are appealing to criminals and hobbyists, as well as ethical vegetarians and fans of architectural eveningwear. (There are also concerns that they could be used to create guns in the event of a 2nd Amendment repeal.) You can make the Things of the Internet and invert the whole model of giving your personal sediment over to an omniscient program; you can create the untrackable, fabricating something that no one will know about other than you. You can charge $241.75 for a Rubik’s cube outfitted with a hole to hide drugs or little beetles inside. Once you start down the path of considering the 3-D printer’s evolution — and even more so, that of the bioprinter — you get irrevocably lost in a forest of dystopian/utopian possible outcomes. More readily available organ transplants and better, cheaper prosthetic limbs would be a boon. But bioprinted babies are, of course, an issue of great concern. (Bioprinting your late golden retriever who understood the command “grovel” and once fetched your mother’s missing glove from within 30 snow-covered acres of land is a little less creepy.) Cloning is messy: It involves the interlocution of judgmental scientists and a lot of waiting around. The future of bioprinting is much easier to wrap your head around: Theoretically, it could happen at a desk, though it would be sort of cumbersome when the dog’s 70-pound body spilled out of the LaserJet tray and knocked over your box of paperclips.

Forbes doesn’t know (see number eight) what “new products” with “magical properties” will be made available by way of 3-D printers, and neither do we. This is the appeal. Right now, the focus is on the technology more than it is on its output — guitar pick holders, salt and pepper shakers, “tire for toys.” Some of the copy accompanying these things (and tests for things) seems to acknowledge the bizarre nature of whatever object is being hawked: a life mask of Abe Lincoln, disembodied and sleepy-looking, is described with a disclaimer that “We have no reason to believe it is real or not.” The description of a “Tiki Bunny Shot Glass” reads only “This thing was made with Tinkercad.” “Tortuous torture, test 1” simply says “As 3D printers evolve so do their torture tests ensuring our perpetual disappointment.” On a very small scale, and in a sort of fun way, flipping through the 3-D printed marketplace is like browsing other people’s god complexes — not that there’s anything wrong with the kind of god complex that spurs you to invent a kitschy shot glass prototype. The amount of work that goes into printing material goods is substantial and I imagine that at this point the only people who are proficient enough to make, say, a miniature chair are the kinds of people who don’t ask for hjalp when trying to assemble an Ikea Stolmen with all the trappings. What this technology can do, and does do, is offer us a glimpse of the horizon from our rocking chairs on the nursing home porch: It belongs to the future, a future that — no matter what Suzanne Somers tells those gullible bats on The Real Housewives of Beverly Hills — the generations currently on Earth will only glimpse on the periphery of their own existence. The Internet of Things, if it were applied, may mean that the landscape of our lives would look drastically different. But that gobsmacking wonder that can only mean that the world will have undergone a transfiguring exfoliation after you leave it is best illustrated with a tangible object that may as well be from Mars — something you can hold in your hand, but you still can’t believe is real.

Afternoon Links: Beyoncé Does It Live, Roseanne Barr and Lena Dunham Do It Again