A Timely and Heartfelt Conversation About the American Pie Franchise 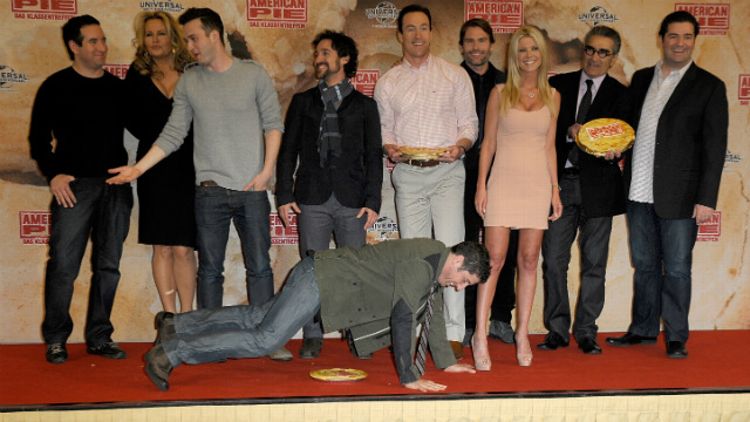 Instead of doing our normal back-and-forth about the week’s newest movie trailers, we decided to discuss our anticipation (or lack thereof) for American Reunion. More often than not, we see things eye-to-eye. This film is not one of those things. Not even close.

Browne: So, Silver, the next installment of the American Pie franchise is coming out. We haven’t talked about this at length, but I get the sense you’re very excited about this film, which couldn’t be more different than my feelings about it. What is it that excites you so much? Seriously, I’m confused. After that, I’ll give you my initial semi-rude take on it and then, who knows? Maybe I’ll go into this weekend with one really nice thought about Biggs and the gang. Or maybe I’ll get even more mad. Who knows? Don’t hold back.

Silver: Rem, you know me way too well. I am psyched to see American Reunion, but not for the reasons you might guess (or maybe, after months of working with me, this inexplicably personal take is exactly what you’d expect). My curse as a fanboy is that I tend to consume and internalize the films I see in a deeply personal way, and the American Pie series was fertile ground for my curse to run amok. The generic plot and paint-by-numbers characters (a jock, a geek, a vanilla wafer, an urbane dork, and an ego — who in a real high school would never be a group of friends) allowed the part of my brain that yearns for ex-girlfriends to take control and romanticize the past. In 1999, when the first film came out, I was two years out of high school, living in a shady motel room in Los Angeles and working 13 hours a day as an intern at a (not-to-be-named) production company. So the nostalgic part of my brain, longing for better times and friendship, was working overtime. I pictured myself as a combination of Oz and Stifler, but in reality remembered myself as Jim and Finch (I even dated a girl in the band. Yeah, I really did). I knew these guys, I grew up with these guys. I thought and talked like them. (Wow, I’m really making American Pie sound like an Altman film aren’t I?)

And this trend seemed to continue for each of the following films in the series. 2001, American Pie 2, I’d just graduated college and watched lovingly as the Pie characters experienced the confusion and angst of the emotional and social limbo that is the summer in between freshman and sophomore year of college. 2003, American Wedding, I’m sitting in a theater exactly 12 months away from proposing to the woman sitting next to me (she said “yes”). Now, I’ll be the first to admit that the American Pie films (hyperbolically) depict a teeny tiny percentage of late-’90s youth culture, but for me (a white Jewish kid from the East Coast), they were eerily relevant to my life. But here’s the rub: In reading all this back, I realize that I didn’t critique or comment on anything “filmy.” So if I really have to (finally) answer your question, I think I’m really looking forward to American Reunion because I just want to hang out with these characters again. See how their lives have compared to mine. I miss them.

Browne: Nothing is wrong with you, Daniel. Actually, that’s such a heartwarming tale, you’ve slightly swayed my take on the film (or at least the tone at which I hate on it). It’s weird to think of the original American Pie film as a generation-splitting event, but after your description it’s evident that’s exactly what it is. Whereas in 1999 you were two years removed from high school, in 1999 I was two years from entering high school. While you saw the film and nostalgia for the “good ol’ days” of high school overtook your emotions, I saw the film and wanted to fast-forward time to the point where I could finally be a cool high school student. We both wanted to be the characters, but mine was from a place of admiration and yours was from a place of longing.

I make this parallel because we view these characters through two completely different lenses, especially as the franchise pushes along from film to film. While you seem to be making your way through life almost alongside them, I’m playing catchup and going through an odd transition from thinking they were the coolest guys around to sort of thinking they are pretty lame. It reminds me of the moment when you finally interact with one of your childhood sports heroes and realize they’re nothing more than brainless robots with huge calf muscles. So yeah, I guess what this all boils down to is, as a guy still close with his guy friends from childhood, watching this now-12-year march from high school to post–high school to weddings to reunions makes me worried that we’ll all end up like them, or at the very least each occupy a space similar to one of the characters. I used to want that as a seventh-grader. That couldn’t be further from the truth at age 25.

This actually didn’t come off too rude. I was originally planning on talking about how they’re all pretty much washed-up actors who never really got past these roles from 12 years ago and are just trying to hold on to any semblance of fame as long as they can before their Hollywood tombstones are finally cemented. Glad I didn’t say that. That would have been rude.

Silver: Who knew that an e-mail chain about a teen comedy was going to turn into Web therapy?

Let me see if I can bring us back around to the films themselves. I think your point about the actors is a valid one. But I’m choosing to view it as the single biggest reason why American Reunion might be great. Let me explain.

By no means is Pie 1 a brilliant film. I can go on ad nauseam about all the factors that I believe went into making it a success (but I’m going to choose instead to stay on topic), but I don’t think there was any bigger reason than the film was made up of a relatively unknown and eager cast, who took a very pedestrian conceit and made it immensely entertaining. It was clear that this was a cast up for anything, and if there’s one bit of filmmaking praise I can loft onto the filmmakers of the first one, it’s that they did a really great job of giving equal weight to and paying off on a multitude of storylines. And this continued into the sequel.

Of the Pie films, no. 2 is by far the strongest. The choice to create a love triangle between Jim, Nadia, and Michelle (the band geek) was inspired, and led to some of the film’s funnier moments (“My name is Pete! I have gigantic balls!”). Again, the film contains a paper-thin plot only made watchable by the strong cast, who clearly look like they’re comfortable and are having fun. But in Pie 2 the seeds for the series’ demise also are planted.

Ultimately, the success or failure of a Pie film rests on how the filmmakers choose to include Stifler. He was clearly the breakout character (see the subsequent straight-to-DVD releases), who’s played (too) perfectly by Seann William Scott. Pie 1 and 2 used Stifler similar to the way Shakespeare used Feste the clown (Bard Reference Alert!). He floated in and out of scenes to heighten the stakes. But as Scott’s star in Hollywood grew, so did his presence in the Pie films. So by the time American Wedding was made, Scott was the biggest star in the cast, and therefore, Stifler was not only in almost every scene, he was even given his own storyline. Stifler is far too strong a character, and as a result, this caused the film to lose its emotional grounding by shifting the focus away from Jim and Michelle’s wedding.

So my hope here is that maybe the 12 (not-so-kind) intervening years has reset this cast’s brains to the point where they’ll tap back into the hunger and desire they all displayed in Pie 1 and 2, allow this film to be a true ensemble again, and fully commit to kicking comedy ass.

Browne: Maybe you’re right, Silver. There’s a chance I began to dislike every additional film because some of the stars were attempting to play these roles, but also make names for themselves beyond American Pie. With that very natural (and understandable) desire for fame and to not be typecast, some of the investment in their roles and the franchise may have decreased. But if American Reunion represents these actors, not only reviving their roles, but also coming to terms with their fate as forever connected with these characters (Eddie Kaye Thomas, I loved you in How to Make It in America, but called you “Finch” the whole time), maybe the hunger to prove themselves will result in a good film. I hope so. I don’t actually want this movie to fail, nor do I want these actors to fizzle out on a bad note. I guess you sort of have to root for them, if for no other reason than for showing their faces in a hostile world where jerks like myself are giddy to make fun of them. I can’t believe I’m saying this, but I really want it to do well.

But not too well, because then they’ll make American Funeral.

Silver: American Divorce and American Remarried will need to come before that, Rem. So I think this series still has legs.

Before we wrap this up, I’d be remiss if I didn’t throw some love Jason Biggs’s way. Say what you will about his other performing endeavors, the dude is rock-solid and fearless in the role of Jim. Don’t believe me? Go back and watch just the scene from Pie 2 when he mistakes super glue for lube and accidentally glues himself … to himself while masturbating. It’s a really well-constructed sequence that showcases Biggs’s comedic timing, his skills as a physical comedian, and his commitment to a bit. I lose it every time I hear him scream, “I’m glued!” Biggs plays Jim as forever vulnerable and hopeful, and throughout the series it’s these traits that have grounded the Pie mayhem in reality. Good on ya, Biggs.

Oh, and one more quickie. Although the producers remain the same, this will be the first film in the series not to be written by creator Adam Herz. Harold & Kumar masterminds Jon Hurwitz and Hayden Schlossberg have taken over both the writing and directing duties on Reunion. We’ll see how faithful they are to the original films based on how they use or choose to regard some/none/all of the below items which have inevitably popped up in all three Pies. (These are outside of the expected tropes we already know about from the trailers — appearance of Stifler’s mom and John Cho, etc …)

Wow. I think that about does it. I believe we’ve broken through some kind of Internet posting threshold. I’m not sure I’d use the word “progress,” but I think it’s safe to say that this e-mail chain did not evolve the way either of us expected.

Browne: You kidding me? Getting off topic and talking about our feelings? That’s what I call journalism.

The Video on Demand Report: Chipwrecked on Squeakquel Island