A Heartbreaking Ode to Terminal Optimism: On the Comeback of ‘The Comeback’ 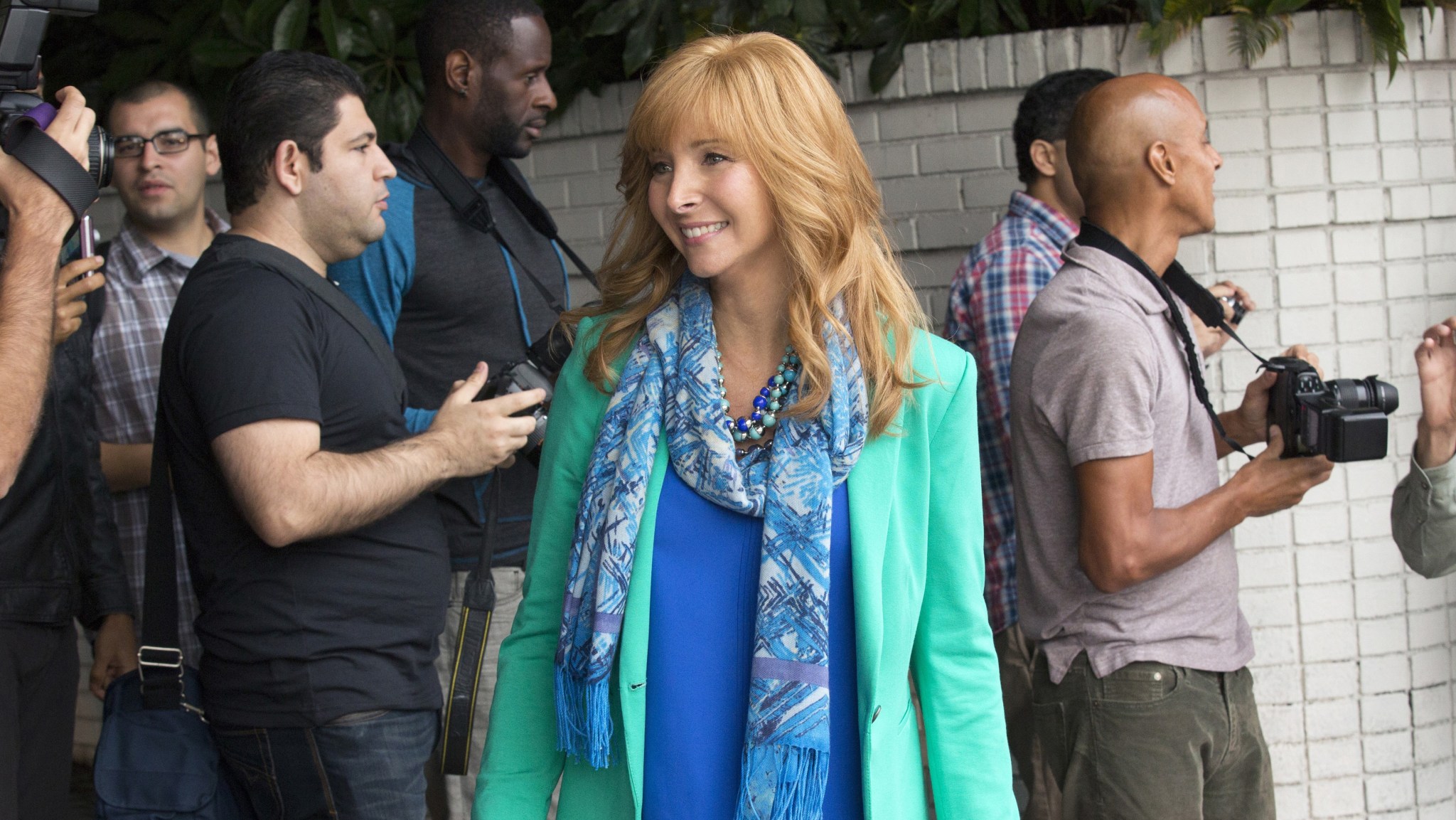 A television actor is lucky if they get to portray one indelible character in their career. But even if they manage to succeed, they often then get boxed in by the success of that character, forever doomed to the comparison. Every pilot season we are greeted with a flood of familiar faces begging, “Remember me? Because I am playing an entirely new character you will love just as much as you loved [X] from my old show [Y].” It’s uncomfortable watching once beloved actors dream that the spotlight will return, knowing that their new show is likely to get canceled midseason, just like the ones from years past. These are actors who worked pretty steadily before their big breaks. Why wouldn’t they expect to continue working after their major career high? If success is a curse, what is failure? Especially failure that follows a stream of success?

The Comeback, which returned Sunday night for an eight-episode arc after a nearly 10-year absence, is a heartbreaking ode to terminal optimism and a more-prescient-than-ever meditation on the ways culture has been altered by the rise of reality television. Lisa Kudrow as Valerie Cherish is one of those television characters who is so real to me that I feel as though I know her personally, like George Costanza or Tony Soprano.1 I understand Valerie. Her foibles are like nightmare mirrors of my own.

Valerie’s refusal to go away is a not particularly quiet act of rebellion. Her vanity and narcissism act as a kind of shield against the sadness and humiliation that plague her life. When The Comeback premiered in 2005, cringe-humor was in bloom, developing the awkward long pauses into an art form. But The Comeback took it to new levels. It went as deeply as Curb Your Enthusiasm into the unspoken fragility of social situations, every single moment fraught with awkward tension. Valerie is often unaware of how others are mocking, belittling, and degrading her existence, but when she does realize it’s happening she defends herself. She is a once-mildly-recognizable actress of a certain age. Los Angeles is full of them. And Valerie is the ultimate actress: childishly desperate for external validation, vain but not without reason, unable to exist unless she is somehow being seen. She is obsessed with appearing likable, and her neurotic moments spawn from losing control of the narrative taking place on camera.

That Valerie is happily married to a cool guy named Mark (Damian Young) who really loves her is one of the show’s many lovely subversive twists, as is her friendliness with her beautiful, successful, younger costar Juna (Malin Akerman). Any other show would make Mark an asshole and Juna a bitch, but The Comeback is nontraditional. Like its heroine, it is surprisingly sweet for all of its bleak turns, but it never puts a sticky sweet hug on its ending or a lesson that contradicts its core darkness. Valerie has small triumphs, but sitcom actress that she is, she always ends up doing the pratfall onto her face.

The meta-joke, of course, is that The Comeback is a perfectly executed triple axel by Kudrow, who is so endearing and natural that Valerie never falls into two-dimensional camp. Not that she can’t do camp! But Valerie is a loving caricature of a perennial Hollywood flower: the actress trying to transition, ever so grudgingly, from ingenue to character roles. For actresses, aging is a particularly terrifying gantlet, one with which the ideal outcome is becoming Meryl Streep and the least ideal situation is turning into Norma Desmond. Add to that the underlying fear that certain types of powerful men in entertainment might view all women over the age of 35 as Norma Desmond.

Kudrow is, of course, subverting that narrative just by existing. She is 51 and just as talented, gorgeous, and fabulous as she ever was. Phoebe was the coolest and weirdest Friend by far, the only one who seemed like she probably had a whole weird life we didn’t know anything about.2 Kudrow was the underdog on Friends, as much as someone who was making a million dollars an episode in the last season can be an underdog. Phoebe’s plotlines often took a backseat to the larger relationship arcs, and when she coupled up with Mike (Paul Rudd) in the last season, it was like they were rewarding her for having played the wacky second fiddle for so long. Kudrow was older than her castmates by a few years, and you have to suspect she’s gone out for roles like The Comeback‘s “Aunt Sassy.” Kudrow’s range of characters has always walked an interesting line between free spirits and uptight schoolmarms, and she is equally skilled at both.

Valerie is both a free spirit and a bit of a prude. She is dependent on attention but unafraid to go her own way. The Comeback plays up the gulf between Valerie’s seemingly never-ending well of self-esteem and the brutal treatment she receives from the people who control the entertainment industry. She is so determined to act that she does a student film and calls it an “indie.” She auditions for a Real Housewives franchise and foolishly leaves the show, Camille Grammer–style, because she doesn’t have sufficient control over how she’s portrayed. Valerie’s desperate attempts to get back in the good graces of Bravo’s Andy Cohen, having realized her mistake, fuel the plot engine of the new season’s first episode. Valerie never has a clue when she is blowing it, nor does she realize when she’s actually killing it.

The new season of The Comeback has all the old, sad magic of the first season. Some of the laughs come from the minor celebrity cameos, familiar to anyone who watches Bravo: Carla from Top Chef (who was ROBBED that season), RuPaul, and Lisa Vanderpump now occupy the same cultural terrain as a Valerie Cherish. The D-list is crowded with people trying to scramble their way up to the C-list, and while the possibilities are greater than ever, the bar for talent is considerably lower and the length of fame is truncated. While Valerie would once have been able to comfortably sit on game-show panels among her fellow fallen stars, she now has to fight for the right to broadcast a Beyoncé-style “documentary” about herself. The season chronicles the comeback of the eponymous show within the show, which ran for a season alongside Valerie’s sitcom Room & Bored before they were both canceled. Valerie’s conviction about getting her TV stardom back against all odds is a nobly idiotic folly. She pursues her narcissistic and self-aggrandizing agenda with the tenacity and Teflon skin of a politician.

A scumbag comedy writer named Paulie G., who was Valerie’s main first-season nemesis, returns for the second season while sucking on a vape. We learn he was on heroin for the duration for Room & Bored and went to rehab twice before reemerging victorious, Aaron Sorkin–like, and selling a pilot called Seeing Red to HBO based on his experience at Room & Bored dealing with a difficult older actress. The difficult older actress is, of course, Valerie,3 and when Valerie learns about the project, she storms in to threaten them with a lawsuit before getting coaxed into auditioning to play the role of herself. The first episode of the new season climaxes with Valerie giving a powerful monologue voicing how Paulie G. imagines she must imagine herself. Valerie is forced to go on at length about how ugly and old and unfuckable other people must think her to be. Paulie G. has no idea that Valerie never doubts for a second that she is a beautiful, fuckable, talented woman, because she is too naturally overconfident. Nor does he really understand the nobility in Valerie’s refusal to be overlooked, her insistence on taking whatever she can get and always doing so with a smile. Valerie always flashes her toothpaste grin in awkward situations, and it only ever serves to make things feel more uncomfortable. That’s what gives the show its deeply unsettling punch. You can never truly relax watching The Comeback, knowing what new discomfort might be lurking around the corner. It’s like a horror movie in which the only things getting killed are dreams.

Valerie will step into any lion’s maw as long as there is a camera and a lighting setup there, and this is the way in which she presciently anticipated the next decade of entertainment when she debuted in 2005. The Comeback leans into the mundanely sad side of the glamorous entertainment business, the flop sweat of out-of-work actors who treat life like an audition. (“God, I hope I get it!”) By the second episode, the whole gang has reassembled, like a Western. Valerie Cherish is, like Kenny Powers, not wholly a hero or a buffoon. She is simultaneously off-putting and magnetic, a modern grotesque rendered with a subtlety Ryan Murphy could never understand. Valerie is one of HBO’s most difficult Difficult Women,4 evoking a blend of pity, sympathy, and unease that not everyone can stomach. Some people find watching Valerie stumble and sabotage and stick up for herself too brutal to take. But for the rest of us, we do want to see that!