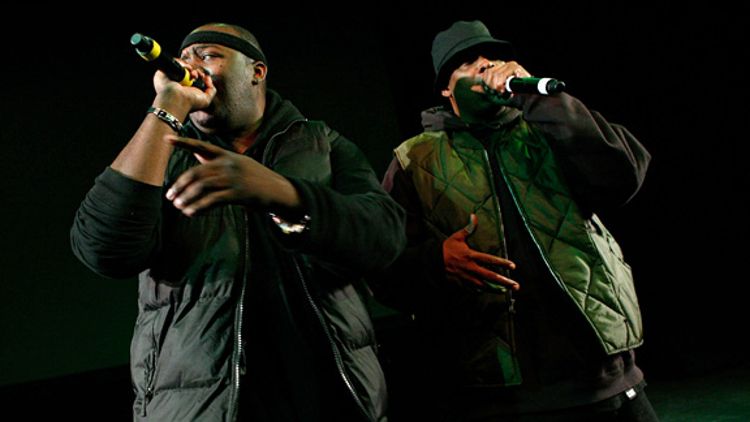 So, Rakim and EPMD are having a party in the park. Remember them? It’s a concert with Funkmaster Flex. Here’s the best part: It’s this Sunday in Central Park. Are we thinking the same call-and-response? When I say “FLEX,” y’all say, “SPONTANEOUS SLEEPOVER IN CENTRAL PARK!!!” Ha. Kidding. But real talk… Do you wanna go?

Yeah, me neither. Since neither of us are going, I’ve been wondering who is going to this show? Oh wait, you are going? Cool. Very cool. I’m going to continue to say what I was saying anyways, OK? Is that alright?

So this type of hip hop show is different than the usual Woodstock-with-a-lot-more-baggy-jeans-and-blunts-and-a-lot-less-topless-white-girls Rock the Bells crowd. Bells is more what I would call a “Hiphopapalooza”. But this show with Rakim and EPMD is more “B-boypalooza”. It’s a little more hardcore, smaller-scale, and East Coast. Should you pop in, or just be curious, I think these are the B-boys you’ll see.

1. The post-B-Boy B-boy (too young)
Hip hop has made great advances in academia in the past few years. Books, panels, and seminars have helped elevate hip-hop culture to the level of literature, poetry, etc. This has resulted in two things: A.) Nerds feel more comfortable rapping (Debbie Downer noise), and B.) People who like rap feel more comfortable nerding (applause). So now hip hop has a legit bibliography, and nerd scholars who, in the past might, have gone to something jazzy like a reading of Norman Mailer essays, now get to go to hip-hop shows instead and talk to girls. Lucky them. (Though not really the girls. Sorry, more on that later).

But the culture’s focus on “authenticity” can make it tough for a young kid who thinks himself an old hip-hop soul. The literature is not a handstamp. They weren’t at the Palladium before it was an NYU dorm. They don’t know. The too-young kids will be challenged by those who lived it, or just find them patronizingly disingenuous. “This college dude ain’t into EPMD like that. He doesn’t know what real hip hop is about.”

The key for the wet-behind-the-ears dude is to be given boundaries. We want their interest rewarded, but at the same time restrained. At some point it’s not about an encyclopedic list of songs, but what you have experienced and marinated.

So for the youth it may concern, here’s a basic Rakim and EPMD marinade/primer. Ten songs for each that every young intellectual should know:

That’s it. I feel slightly weird even listing these songs. You should know them. They’re classics of the genre. But do you need to know more than these to prove you’re down? Nah.

2. The Prep School B-Boy (sellout): The dude who went from Andover to UPenn, then a job with Goldman all while staying up to date on the underground hip-hop railroad. That guy is definitely pushing more weight in meetings with his ability to drop an old hip-hop reference or two. At some point it was part of his charm — it gave him some edge, made him less of a douchey banker. For a culture with such profound fundamental flaws, hip hop remains the primary distributor of street cred, co-signers for swagger. So for this guy, the concert’s a chance to pop his collar one more time. “Yeah, dude. Sorry I couldn’t call you back. I was too busy checking ‘The R’ at Central Park. Man, that guy is sooo good.”

So what prizes do we have for the prep sellouts? Something to reconnect with the world you have neglected. Herewith is a cursory glance at the musical descendants of Rakim and EPMD.

(I feel like a hip-hop blogger is going to shoot me for being so casual and reckless. But no Internet reader who has come this far shall be left behind!)

3. The 40-year old B-Boy (virgin)
The black version of the Steve Carell character collects old-school rapper figurines instead of superheroes. He liked hip hop before it was “all about the money,” but then the world exploded and now he’s a little shell-shocked, stumbling into a Rakim/EPMD concert looking for an oasis of boom bap. But he’s sort of a virgin in terms of what has happened since the B-boys lost the war. So before they go off about the beats and rhymes of yore, they need to be reminded of a couple things:

A. Lyric metrics: is there anything actually new for emcees to do? Eminem, Big, Jay, Nas, Wayne, Snoop and on and on, it feels like we’ve seen what can be done with lyrics — at least until they start shooting fireworks out their boobies. But much like sabermetrics have forced baseball purists to adjust their perspective, so too must old B-boys respect the evolution of the emcee game. There are fond memories of Rakim’s “take seven emcees put them in a line”, but when you start decontextualizing the lyrics, and filtering for context and other variables (steroids, small stadiums), the overall effect can amount to less than “the most incredible rhyme ever”.

B. Beat metrics: Same thing that happens with Rakim’s legacy is even more pronounced with EPMD. Eric Sermon was a wonderful pioneering producer, but his heavy reliance on James Brown and P-Funk samples shows its age now when every iPad DJ is lifting the same loops for his Thundercats mashup videos. Even the dusty sample sound has been updated by guys like Dilla (RIP) and Black Milk. The music has evolved, 40-year old B-boy virgin. Deal with it.

4. Where the Lady B-Boys at? (not here)
Girls at B-boy shows are like unicorns at B-boy shows, except they look more like girls. Even in the late eighties, Rakim and EPMD weren’t getting ladies into the spot. B-girls exist, but can only come out to the shows on a very selective basis, and with a heavy entourage, cause the potential for testosterone terrorism is high.

You might get some actual tougher-skin emcees — a Jean Grae in the back, a Ra-Digga in the bushes — but I think they’re mostly part of another group …

5. No-Show and Internet B-Boys
The “yeah, me neither” crew. Shows put on by hip-hop architects are always more appealing in theory than practice. A scan of the hip-hop Internet will reveal no lack of worship for Rakim and EPMD, but many have stopped going to shows, in part because old-school hip-hop concerts aren’t usually much of a “show”. The Roots backing Rakim, OK. Rakim alone? Probably not.

BUT. The no-shows are also missing out on one of the treasures NYC provides, which is the last sort of attendee at this kind of concert …

6. Former Artist B-boys
Your Puba, your Chuck D, your Ralph McDaniel. These guys show up for mainstream New York events like this. This is their hustle now. Flex in Central Park, let’s grab the mic! Call Rock Steady, let’s get some pop-locking poppin’, too!

I guess there could be worse ways to spend a Sunday afternoon than with Rakim, Erick and Parrish Making Dollars, Flex, some cardboard, and no ladies around to worry about posturing for. Feel free to commence chillin’ in your B-boy stance!

Hmm, maybe I’ll stop by after all.