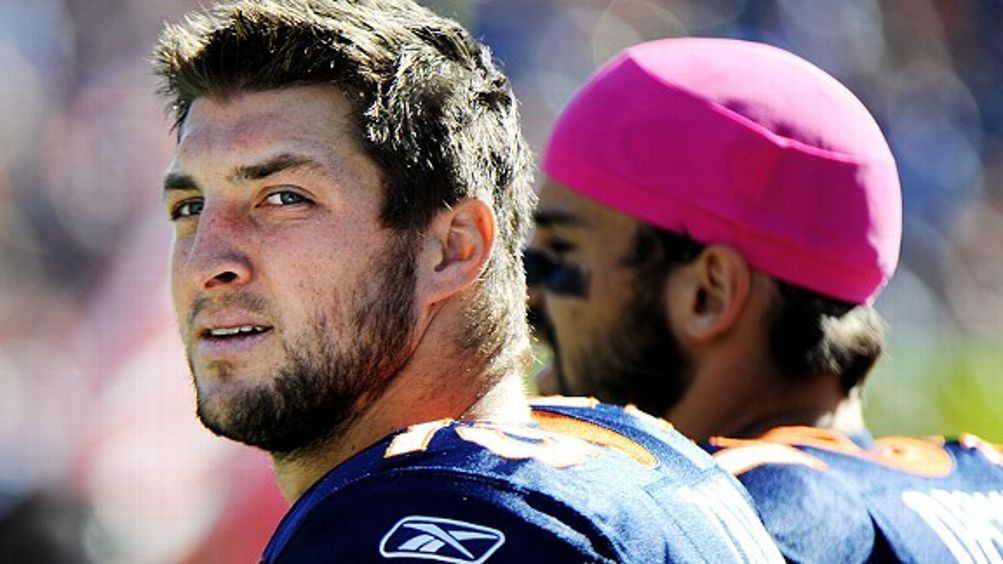 I‘m not a God-fearing man, nor am I someone who responds particularly well to messianic figures who charge through their work with a manly sense of purpose, as if all of life were an Old Spice commercial in which irony had shriveled up and died. Having split my childhood between hip-hop and the neurotic narrators of modern novels, I prefer my athletes to be loud, hell-bent, and “interesting,” whatever that might mean. As such, if I were to build my ideal Frankenstein’s quarterback, I would take the GZA in 1999 and graft on Vick’s legs, Levin’s morose attachment to duty, and Jeff George’s left arm and tortured entitlement.

And yet, I find myself rooting for Tim Tebow, who never talks about anything that is interesting to me, who travels to the Pacific to circumcise babies, who does not make cameos in rap videos, and who, without blinking, eyes up the zeitgeist, smiles, and says a prayer for its soul.

The NFL is a notoriously difficult sport to write about — outside of insider reporting about who is hurt and who is not, who is starting fights in locker rooms and drunk driving all over Cincinnati, there just isn’t much outside the lines to discuss. The game is usually enough. Twenty-two men put on helmets on Sunday, and although millions of people watch them do their jobs, we don’t really know 20 of those men, and for the most part we don’t really care. Clinton Portis tried for years to make us care about him, but his Bootsy Collins act never became anything more than what SportsCenter would talk about when there were no other storylines. Wide receivers became interesting for a while, but only because of Terrell Owens, whose never-ending dramas were camera-friendly and buzzwordable. When T.O. finally got his own reality show and began dropping passes, the interest in Ochocinco, Steve Smith, and their acolytes evaporated.

The players who drive the league’s narrative are mostly quarterbacks, and, sadly, because the National Football League has committed to a thoroughly scrubbed model, if you put this current QB cast in a movie, the logline might read something like: Taylor Lautner and Josh Duhamel run around while a bunch of shit blows up. And as long as shit keeps blowing up, I suppose there’s no pressing need to change the mold. Tom Brady taught the league that it was enough to be handsome, tall, and excellent. Peyton Manning, who is tall and excellent, made up for his un-handsomeness with a refreshing, yet ultimately staid style of sales comedy. Outside of Michael Vick and Ben Roethlisberger, who had no choice, every star quarterback in the league has built his image around those two idols. Favre is a distant memory. Aaron Rodgers is just Brady with less chin. And, on those rare moments when he decides to delve into a little “show the fans who you are,” he channels Manning and monotones his way through very safe, very unfunny jokes. Matt Ryan is just a more boring version of Aaron Rodgers. When quarterbacks stray from the formula, they are criticized for their excesses — Philip Rivers frowns too much, or maybe he smiles too sarcastically; Matt Schaub is too bald; Eli always looks sad and doesn’t have those Peyton/Brady moments when he stops being a very good quarterback and mutates into a screaming, spitting superhuman. Drew Brees comes close, but his image is so wrapped up in New Orleans that it doesn’t quite translate to the greater market. We can be happy for him and be happy for New Orleans, but there’s a reason why UGG didn’t ask him to be the face of their brand.

Football’s fan base, for the most part, has substituted the word “champion” for personality. And I suppose that’s fine. But aren’t we all a bit tired of having all our discussions about quarterbacks devolve so quickly and ruthlessly into shouting matches about who has won what?

Tebow is something else. He might not become a great quarterback or even a good one, but he captures the country’s imagination in a way that strays outside of the league’s expected storylines. Even if you hate the idea of a God-fearing man who leads his team to close losses through unorthodox means, you are at least interested in whether or not he succeeds or fails. But since so much of the talk about football must be translated through the bro-language of who-knows-how-much, Tebow is usually dissected and examined on his football potential. People talk about throwing motions and drop-backs and awareness and accuracy. I imagine all this means something to somebody, but it’s ultimately irrelevant. The NFL needs Tim Tebow to succeed.

Not because it needs a chiseled, smiley face to sell to the red states, but rather because what the most profitable, successful league in the country lacks right now is star power. Favre is gone. So is Terrell Owens. Peyton Manning will probably not play a meaningful down in 2011. Three of the league’s 10 biggest names are marketed almost entirely on their hair. And although Brady still appears to be in his prime, the days of him occupying tabloid headlines are over. If you take a hard look at the upcoming stars, who could really play a leading role in the NFL’s ongoing drama? Philip Rivers? Matt Ryan? Joe Flacco?

Stars work better in pairs. The league also needs the other young, dynamic quarterback who keeps leading his team to close losses. Before he ever played a professional down, a lot was made of Cam Newton’s announcement that he wanted to be a worldwide brand. Now that Cam is filling highlight reels every Sunday, does anyone really doubt the prescience and the appropriateness of that statement? Cam, as they say, moves the needle. So does Tebow. Both have already outgrown the stage in which the league could have converted them to whatever it wanted them to be. Because of their high-profile college careers and their individual magnetism, we already know more about Cam and Tebow than we know about Matt Ryan, Aaron Rodgers, or Philip Rivers. And while I understand that the NFL is marketed around teams and winning, can you think of one storyline that would be more compelling than Tebow vs. Cam?

There’s no need to hash out the particulars of that drama or how those two would polarize and energize the NFL. Tebow vs. Cam is self-evident. And perhaps that’s proof enough of why it needs to happen.

Last night, David Stern canceled the first two weeks of the 2011-12 season. Although the circumstances and finances behind the NFL and NBA’s issues were very different, there is one unifying irony in this year of lockouts: The league that is flush with money, which also happens to represent the sport with the shortest career length, highest injury rate, and worst benefits for its ex-players, ended its lockout with a clear win for the owners’ side, while the league that has cultivated players’ personalities as part of its brand cannot bridge any of the wide gaps that Stern alluded to in last night’s statements.

I can’t help but think that part of the reason why the NFL players rolled over so easily is because they, for the most part, remain faceless and nameless. When workers, themselves, are brands and know that the success of their enterprise depends entirely on their existence, they feel more empowered to dig in their heels in negotiations. An NBA without LeBron, Wade, Kobe, Chris Paul, and Dwight Howard is severely diminished. Regardless of what you thought about our Renegade Basketball League piece last week, the fact that such things can be imagined and discussed proves that if things got worse and the season was canceled, the players could become movable commodities.

NFL players don’t have the same value — their league got through a season without Brady and has done just fine in a season without Peyton Manning. And given the NFL’s rules against showing the slightest smidge of personality, it’s clear that the National Football League wants to keep those three words as its focal points. Players are fined for “excessive” celebrations in the end zone. They are fined if they want to wear any alterations on their uniforms. They are fined if they speak out against the league or its governing powers. They are discouraged to speak on racial matters in the sport. Most tellingly, they are fined for taking off their helmets on the field of play, thereby barring the only time they can show their faces.

None of this is necessary, nor is it “just how football works.” It is a deliberately constructed process that breaks down the individual player and replaces him with the Shield, thereby allowing the league to choose who will shine.

I certainly don’t mean to argue that Tebow or Cam Newton can single-handedly, or even as a pair, destroy that machine. But I do think that part of what makes the possibility of their rivalry compelling, at least to me, is that neither man really seems to care about what the NFL thinks.

They both have already caught the attention of the country. They had that before they took a snap in the league. Now all they have to do is learn how to actually win a few games.

Jay Caspian Kang is an editor at Grantland. His debut novel, The Dead Do Not Improve, will be published by Hogarth/Random House in Summer 2012. Follow him on twitter at @jaycaspiankang.