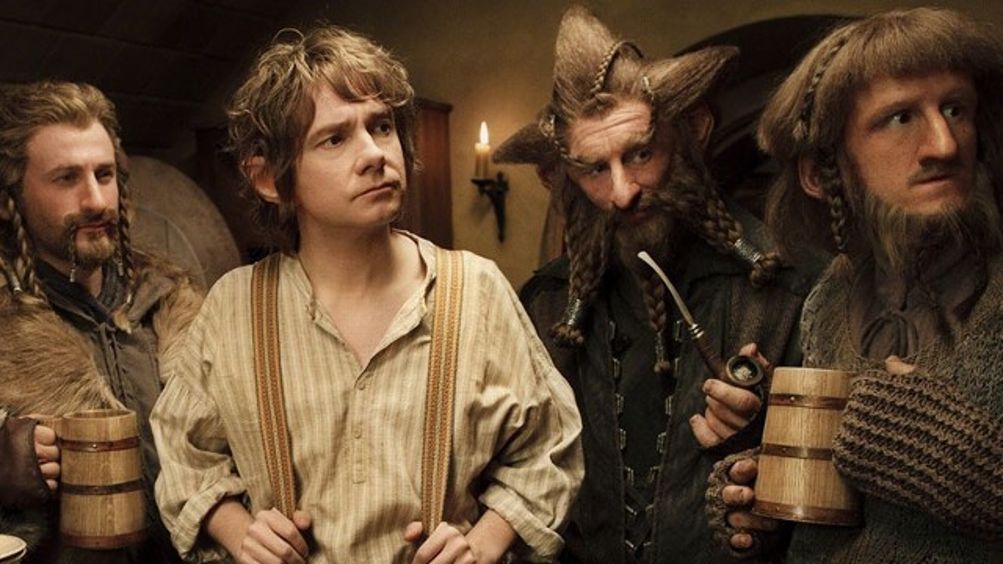 All morning I’ve been staring at this photo of New Zealand prime minister John Key wielding a hobbit sword. President Obama gave it to him, apparently. And here is the four-minute-and-twenty-seven-second Lord of the Rings–themed safety video they now show on Air New Zealand flights, which begins, “Welcome aboard this Air Middle-earth flight,” a sentence spoken by a stewardess dressed as an elf:

I am particularly fond of the part when the pilot is revealed to be Gandalf.

You can visit Hobbiton, the mock-Shire that director Peter Jackson built for the Lord of the Rings films, as just over a quarter of a million people already have. It’s two hours outside of Auckland, and partially destroyed, because that’s what happens to movie sets when the movies are through with them. In 2004, after the final LOTR installment was released, garnering 11 Oscars and more than $1 billion worldwide, 6 percent of all visitors to New Zealand admitted that their main reason for coming to the country was because of the movie; as the New York Times reported, 11,200 of those people “said it was their only reason.”

Oh, and Kim Dotcom, the 300-pound Megaupload pirate king who was arrested in New Zealand after police cut through the walls of his safe room and seized his Rolls-Royce Phantom Drophead Coupe? His fatal error may well have been allowing his site to play host to bootleg LOTR films and other Hollywood properties. Copyright infringement: not tolerated in the Shire.

There is a point to all this, and that point is this: Like few movies before or since, Jackson’s three Lord of the Rings movies have permeated actual human reality in dozens of fascinating and often very strange ways. It’s amazing, really. After crafting the most exquisitely realized fantasy universe ever put on film — a world that was self-contained and vivid and totally persuasive in its native mythology, jewel-box cities, and warring tribes of differently sized magical beings — that fantasy universe then leaked right back off the screen and into our daily existence, where one of the founding members of the United Nations now advertises itself to tourists as “100% Middle-earth, 100% Pure New Zealand.”

As an unredeemed fantasy-novel reader and a guy who spent his childhood peering in vain at distant hilltops, hoping to see a ghostly army silhouetted against the horizon, this all just makes me so happy — as delighted as Prime Minister Key, even, as he waves his hobbit sword around in his blond-wood, adult-person office. As a kid I didn’t understand why they weren’t already making Lord of the Rings films. Why was every movie some version of two adults standing around, talking? I could see that whenever I wanted. What I couldn’t see in real life was a pointy-tipped ear or a 10,000-soldier battle or a man with a filthy white beard casting a spell. So when director Peter Jackson came along and at last put all that stuff on screen in breathtaking detail, I felt some obscure cosmic gratitude. Like, finally.

Jackson’s decision to return to this world nine years later with The Hobbit was greeted with cynicism in the more adult corners of the film Internet that I read — especially after Jackson Jay Leno–d his chosen successor, Guillermo del Toro, and split the original novel into two movies, and then three. But if I’m being honest, I was just happy about getting a chance to go back.

It’s not very good, this new Hobbit. It’s a two-hour-and-fifty-minute movie that feels like it lasts for five or six years. Jackson pioneered a new technique in filming the movie, shooting at 48 frames per second, twice the usual speed, which lends an unwanted, disorienting clarity to the proceedings. Much of the film looks like a video-game cut scene; or, more accurately, a movie set on which actors are acting, since you can see with terrible precision the costumes and the makeup and wigs and the fake rocks. High definition has been a miracle for sports and a largely unresolved catastrophe for nearly everything else. Anyone who has ever been on a movie or TV set knows just how much artifice and trickery and elaborate lighting and angles go into making it all look real. Filming in 3-D, and with a higher frame rate, doesn’t enhance that artifice; it exposes it. You can see the paycheck sticking out of Sir Ian McKellen’s beard.

But ah, that golden font, that guileless flute music. Those cities, like lush paintings. The Hobbit is still very much a Lord of the Rings movie, written and directed and acted by many of the same people, with the same strident, unself-conscious sincerity and inventiveness. There are otherworldly creatures riding on the backs of great horned elk, big stone giants lobbing rocks at one another, Hugo Weaving speaking Elvish. There is an animal wizard with dreadlocks and lichen growing on his face. There is a goblin king with a giant scrotal chin and a goat’s-skull staff played by Dame Edna. Martin Freeman plays a young Bilbo Baggins, and he’s one of the best actors this series has ever seen — quizzical and reticent and self-possessed.

There is both a comical amount of exposition and a profound dearth of plot. The movie follows the youthful hobbit on a modest journey — “There and Back Again,” as J.R.R. Tolkien’s original subtitle had it. A wizard and 13 dwarfs show up one by one, unwelcome and unannounced, at Bilbo’s door — it’s like something out of John Cage, or Andy Kaufman, the same joke repeated over and over and over again. They eat his cheese, sing mournful dwarf songs to one another. I lived many lives during these 50 minutes. Eventually they leave, with Bilbo in tow, walk a modest distance — although not quite all the way there — and the movie ends.

To some extent, Jackson’s inventiveness is almost working against him now — he can’t help himself. The Hobbit begins with a long prologue concerning the destruction of the golden dwarf city Erebor by a dragon, Smaug; the existence of the second film in this series, subtitled The Desolation of Smaug, is presumably what keeps Jackson from showing us, even as the hours drag on, what his dragon actually looks like. Erebor’s dispossessed dwarves are the ones who eventually show up on Bilbo’s doorstep, with the idea that he might help them get their city back. Other digressions include a flashback to a battle in which a tree branch–wielding Richard Armitage faces off against an orc; a hallucinatory sequence following Galdalf wizard-confederate Radagast the Brown, who tearfully nourishes tiny porcupines by hand and rides a sleigh pulled by rabbits; and an awkward summit of all the actors — Christopher Lee’s Saruman; Weaving and Cate Blanchett’s wise elves — who starred in the last three films but don’t really have parts in this one.

There is a huge difference between inspiring childlike wonder and actually being childlike.

The Lord of the Rings films were always better when their characters were in motion, and after a sadistically static first hour, things begin to move, and The Hobbit becomes much more enjoyable. Wolves gallop across yellow planes, horses string themselves out in misty woods, and our pack of heroes outwit trolls, goblins, and, eventually, Gollum himself, in the riddle-off that is the most enduring scene from Tolkien’s original novel.

There is a goofiness to that book, a kind of deliberate modesty to its plot, that differentiates it from its hyper-serious successors. Jackson — always scrupulous about accuracy — attempts to honor his source material’s lighter tone. (Picture a troll complaining about how his troll friends don’t appreciate his cooking, how he’d prefer a compliment every once in a while: “Thank you very much, Bert. Lovely stew, Bert.” LOL!) This was probably as bad a mistake as the movie’s Empire-like running time. There is a huge difference between inspiring childlike wonder and actually being childlike. The Hobbit is too often on the wrong side of this divide.

The second film in Jackson’s LOTR trilogy, The Two Towers, is also the best one, precisely because it has no real beginning or end — it’s the movie in which the illusion of Middle-earth is most alive. All the characters are just loose across the land, fighting battles and negotiating truces and doing Lord of the Rings things. So I maintain hope, however embattled, for this franchise yet. Martin Freeman is a worthy anchor. And while you can accuse Jackson of being a bad editor — you would be correct — his Middle-earth is one of the more unlikely and astounding film creations, maybe ever. It is a place; you can visit it. For better or worse, it will go on.