The Secret of Eli Manning 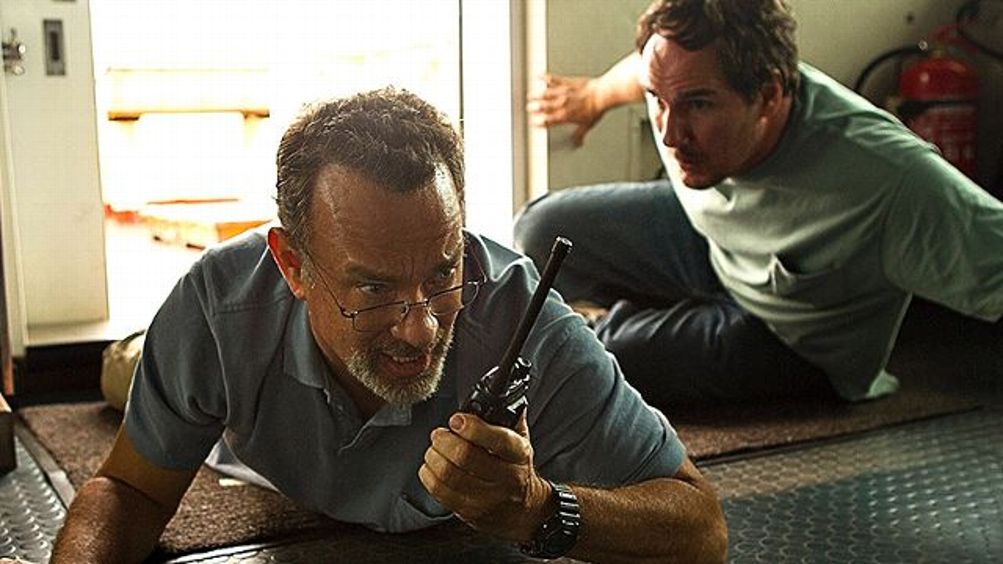 The doomed voyage in Paul Greengrass’s Captain Phillips begins where bad action-thrillers often climax: amid shipping containers. The camera hovers above stacks and stacks of big, bright, 8-by-40-foot rectangles. What the shot establishes is a location. We’re at the Port of Salalah in Oman. But the stacks also establish the stakes of the stress and emotional devastation to come. Once the ship is hijacked, every shot that features even a bit of all that tonnage recasts it: Lots of men and women risk their lives to make and deliver goods that some people take for granted. A world away, some other people covet what those goods signify. A few of those people become pirates. And, astonishingly, this movie is as much about them as it is about their victims.

Captain Phillips dramatizes the story of an actual 2009 incident in which armed Somali men came aboard an enormous Maersk container ship headed for Mombasa. The hijacking scenes are tense and swift and grimly ironic. The ship’s captain, a trim, goateed New Englander named Richard Phillips (Tom Hanks), is in the middle of conducting security drills when he notices a suspicious blip approaching on the radar. There have been warnings of trouble near the Horn of Africa, but it’s clear that even without a threat Phillips runs a tight ship.

Early in the movie, the captain interrupts a coffee break and sends the crew to their stations. The glowers that he wins are the ones you give a boss who seems to take his authority too seriously. But once it’s clear the ship has been targeted, the men shed their exasperation and spring into action. But they have doubts. The camera gets in close on the crew’s worried, agitated faces. But Phillips, who is nervous as well, exerts his authority. They don’t have a choice. The maritime authorities haven’t given the most useful instructions. The crew have to be prepared to defend themselves. Phillips tries to be resourceful. He knows the men in the skiff are on his radio signal, so he fakes a military call to intimidate the blip.

All along, we’re also in the rocketing, rickety skiff. Actually, the movie does something more remarkable. It grants the men in the boat their own side of the story. Not long after Phillips hugs his wife (Catherine Keener) good-bye in New Hampshire, there’s a shot of commotion in a Somali fishing village. The local industry no longer appears to be very lucrative. The men are bullied into piracy, often more than once, only to return the spoils to the local warlord. There are ships near the Horn of Africa. The task of catching and taking over one goes to four ropy men with geometrically long faces: Muse (Barkhad Abdi), Najee (Faysal Ahmed), Bilal (Barkhad Abdirahman), and Elmi (Mahat M. Ali).

As a quartet, they shove off toward the Maersk ship in part because they have no choice. But they also have a kind of Robin Hood bravado. They want a multi-million-dollar ransom because whoever owns the ship can afford it. When they find out their target is an American ship, the Somalis react as though they’ve won the Powerball. Logically, the film’s two halves first meet on the ship’s bridge.

What occurs between them first is potboiler action stuff. Phillips tries in vain to keep the Somalis from discovering the 20 or so men hiding far below near the engines. He keeps his walkie-talkie open so the crew can improvise based on what he’s telling the intruders. He tells them to take the ship’s $30,000 in cash and a lifeboat and go. A couple of the Somalis view that as an insult. A series of events forces them off the ship and into the little orange boat anyway. But they take the captain with them as a hostage, and a film already thriving in close quarters only intensifies in a space 28 feet long.

The film spends the second half alternating between the lifeboat and the American military’s attempt to find and rescue Phillips. All the men do is sit and wait and shout and talk — and as they do, the film’s moral sophistication begins to work on you. Captain Phillips is actually based on two true stories: the catastrophe Phillips documented in his book A Captain’s Duty: Somali Pirates, Navy SEALS, and Dangerous Days at Sea and Hollywood’s dehumanization of the Third World. 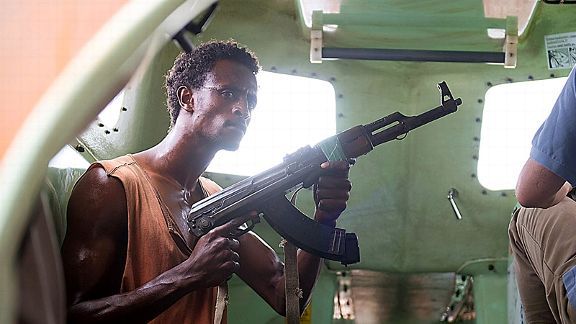 There’s every reason to catch the advertisements for this movie and throw up your hands. Tom Hanks versus the bad Africans is so Hollywood it’s almost farcical. When the Somalis climb aboard the ship and think they’ve hit the jackpot, you almost expect them to see Hanks’s face and run: We’ll never win! But the movie Greengrass has made, from Billy Ray’s script, shrewdly frustrates that expectation. He knows he’s crafting a thriller about the abduction of Hanks, and that in doing so he’s raising the bar high for the movie’s humanist challenge. Can he get you to see more than Phillips’s peril? Can he get you to understand the Somalis’ as well?

In so many ways, Captain Phillips reckons with the hazards of a consumer economy, not just the goods that one country ships to another but the images and ideas that Western nations export around the world. The way the movie portrays the Somalis initially feels typical of how the movies treat Arabs and Africans. They’re screaming lunatics whose eyes pop out of their heads. Najee is especially one-dimensional. He’s no less unstable on the lifeboat, but by then the tenor of the movie has changed. He’s unstable and irrational but he’s also desperate: both for a way out of this mess and for more of the extremely addictive khat the Somalis incessantly chew but have run out of. They’re running a hostage situation essentially in withdrawal. Despising the Somalis becomes harder as you watch them take distressed looks out of the little lifeboat window and see a gigantic military closing in on them.

Before Greengrass made movies, he was a journalist, and as a filmmaker, he provides the illusion of objectivity. He’s a docudramatist. In Bloody Sunday and his two Jason Bourne movies — to say nothing of United 93 — you see what Greengrass wants you to see. But you also feel free to draw your own conclusions. (His Iraq war film, Green Zone, came too close to taking a side but pretended to walk a straight, apolitical line. That’s the only film he’s made where his approach left him with a hollow, phony movie.) It’s not as if you can’t detect a sensibility. He’s the opposite of Michael Bay: Greengrass makes jumpy, fretful action thrillers about the consequences of action. It’s possible to like both men’s films. It’s even possible to pretend there’s no significant difference. And the hawkishly inclined are free to love the Bourne movies without reservation. But where Bay unconditionally partakes in the permissions and entitlements of the intelligence- and defense-industrial complex, Greengrass approaches the use of force with intelligent complexity. His movies feature settings too far-flung to ignore the impact of all that force. The sense of outrage and shame in a Greengrass movie would get him called a pussy in Bay village.

Greengrass works in a tough, physical, overwhelming, immersive style. Much of that sense of on-the-ground reporting comes from use of handheld cameras. Barry Ackroyd is Captain Phillips‘s cinematographer, and for once Greengrass’s seasick-inducing moviemaking has a natural home. That style leaves you feeling jostled, exposed, unsafe, and frequently out of breath. His movies are scary because, like some good news stories, they don’t feel as if they’re trying to protect you. There’s a dangerous recklessness about his filmmaking, leading to movies that feel like speeding cars with no seat belts, windshields, or brakes. That chaos is, of course, highly controlled.

Captain Phillips made me think the same thing I thought about United 93: How did he do that? You could leave the latter movie wondering about why it was made, but the elusive skill of its maker is never in doubt. Captain Phillips forces the viewer to wrestle with a different kind of intent. It’s the rare movie about Western guilt that doesn’t wallow or pity. What some moviegoers will experience in that lifeboat is not Stockholm syndrome. It’s a hard, searing empathy. In every Greengrass movie, what’s at stake is both personal and political. But Captain Phillips represents a subtle new risk for his globalist existentialism. 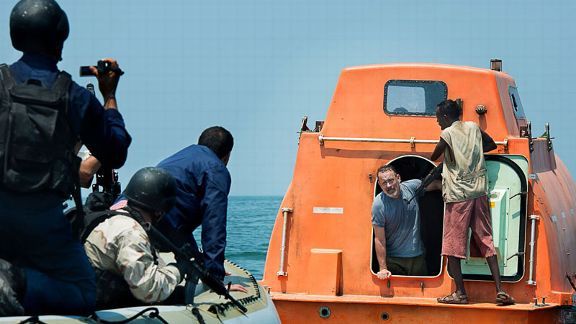 This is a film about bigness and smallness. The five men bob atop the Gulf of Aden as if they were in a toddler’s bath-time tugboat. Both the captain and his captors are tiny players in a larger geopolitical configuration. The framing bears this out. There’s more than one shot of the lifeboat shown not far from a U.S. destroyer. Early on, the Somalis’ approaching skiff shares the camera frame with the container ship, which tries to maneuver away from the smaller, nimbler boat. There’s also the relentlessness of America’s first-class military focusing on four men from a Third World nation, the undeniable appeal of Hanks’s stardom versus the relative anonymity of his costars (though the movie certainly closes the gap there, especially with Barkhad Abdi, who carves out a moving performance), and the achievement of Hanks bringing his stardom to bear on this small, intense feat of acting.

That discrepancy in size also gets at the matter of privilege. Greengrass sets up the movie’s finale so that the tremendous effort that goes into Phillips’s rescue is almost embarrassing in its scope. Another movie would have reduced the many scenes with the maritime authorities and the Navy in order to show Phillips’s family and friends huddled together in anguish. But once Keener says good-bye, she never comes back. The character isn’t needed. Nothing about this movie is cheap. The mere awareness of the divergent fates of the men in the lifeboat is enough to break your heart.

Muse remains reasonably optimistic that his elders will also come for him and the others. But we know better. For a privileged audience that’s the power of this movie. It elicits guilt, not about being citizens of a nation that would move heaven and earth to save you from pirates, but about knowing that the American movie industry has been churning out a version of this situation for a century and calling it entertainment. The effort to rescue Phillips serves a purpose different from, say, the procedural scenes in the air-traffic control room in United 93. They have the force of a precision-oriented hurricane, and yet it’s interesting that Greengrass doesn’t push the military action in a manner that could be construed as heroic. It feels like work. Heroism is something the movie is striving against. It can’t even be applied to Phillips. He was just doing his job too.

Captain Phillips wrecked me before Hanks released the valve on his stoicism, but when he did I sobbed. It’s the most powerful acknowledgment I’ve ever seen of the comparative unfairness of simply being born. Both the world and pop culture place lesser value on certain lives. Either you live somewhere that will make a movie about the time the Navy rescued you from pirates or you don’t. The difference here is tragic. The Somalis had their reasons for storming that ship. But the movie doesn’t ask us to be naive about what they’ve done. It trusts us to understand the hijacking for the crime it is — and to know that these sorts of crimes happen in the world. But it also dares you to consider the despair behind the crime. Greengrass entrusts the audience with complexities of the bigger picture. Over and over in this movie we hear variations on the phrase “everything’s going to be OK.” It’s just impossible to head out of the theater and back into the wider world believing that’s actually true.