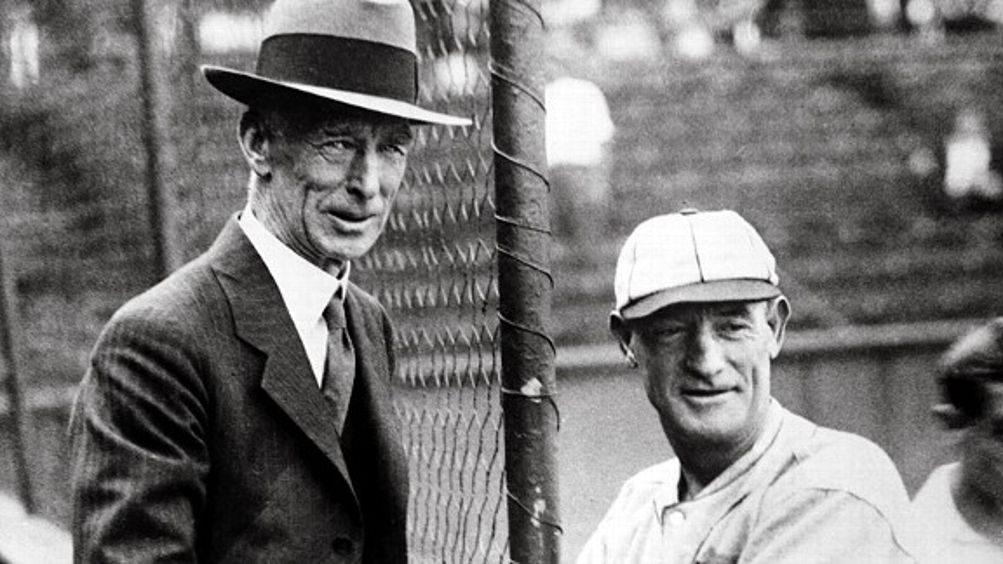 I was watching Moneyball when it hit me, when it just punched me in the head. I sat there and really saw what I had been seeing my livelong baseball life but, apparently, had never noticed. The movie opened two months ago, so you probably know that it’s about Billy Beane and the 2002 Oakland A’s season, and that it’s become a paragon of all that is solemn and earnest and reasonably accurate about a kind of sports management. Philip Seymour Hoffman spends the whole movie begging for Brad Pitt’s respect, and what hit me was that, as good as Hoffman is and as correct as his portrayal of the A’s manager, Art Howe, might be — Howe himself thinks it’s close to character assassination — why should we respect the guy? That jacket, that cap, those pants, those legs, and that haggard, ashen expression: He looks like a fool. All managers do.

One of the many stresses that accompany that strange and often thankless job is the dress code. Baseball managers wear the uniform of their team, and often it doesn’t matter whether the uniform is any good — and these days few are — it’s a challenge to locate dignity in the sight of middle-aged and old men in warm-up jackets, spikes, and leggings. This year the season ended before October did, but in major league dugouts across America, spring and summer are Halloween, too.

Howe was right to dislike his Moneyball self. For one thing, he’s a lot handsomer than Philip Seymour Hoffman. For another, he never looked bad in his manager attire. Howe’s now doing Astros commentary for Fox Sports out of Houston, and the beauty of him in middle age is all that ranginess from his playing days, that chin and bulb of a nose, the bygone taciturn manliness, invite you to wonder how he might look managing a cattle ranch instead. A baseball uniform on such a man — on any man over a certain age — suggests a stubborn clinging to the past, a refusal to yield the sport to the kids. Baseball doesn’t need more authority figures. It needs more authority figures who dress authoritatively.

We’re a zillion years from the days of Connie Mack. Mack managed the A’s when they were in Philadelphia, and he did so in fedoras, boaters, and three-piece suits. He wore tiepins, wing tips, and leather gloves. He sought smart players who didn’t drink or misbehave. The Tall Tactician, they called him, and part of his tactic was to conduct the business of baseball while looking very much like a businessman. After Mack retired, in 1950, Major League Baseball created a rule outlawing non-uniform attire in the dugout. Mack usually sat in the stands. Nonetheless, in requiring managers to wear uniforms, baseball forever cramped a style that still thrives in professional soccer, hockey, and basketball.

It makes sense. For the indecisive, modest, and glamour-averse manager, the uniform rule is a godsend from the land of get-up-and-go. The uniform also solves America’s contradictory class issues. We don’t care that a guy makes 5 million bucks as long as, when we’re paying to watch him manage, he looks like the $98 those same clothes would cost at Dick’s Sporting Goods. For a manager, the uniform keeps alive the cultural fantasy of the 99 percent. Most managers used to play, and it probably relieves some of the job’s stress when they can dress as if they still do. Win or lose, the manager is in it with the players. It’s just that on too many teams, that solidarity includes wearing the same poorly tailored uniforms.

This is to say that there is a charm in the basic-ness of the manager’s uniform. Better to be a little pitiful than a little crass, I say. Plus, there is something mildly nauseating about those broadcast cutaways to the owners of teams in every sport whooping it up in their skyboxes while their employees toil below on the field, court, or ice. Today the Connie Macks of the world would just seem like the Jerry Joneses. And no one wants to keep up with them. It’s worth noting that Mack became a full owner of the Athletics, and another matter baseball clarified after his retirement was one of propriety: An owner and a manager could no longer be the same person. So the issue of class and clothes became further hierarchical: You’re either a lord or a serf, but part of the awkwardness of the manager’s burden is that he’s stuck in the middle.

When Terry Francona left his job as manager of the Red Sox, one of his stated regrets was that during their late-season implosion he’d lost control of the team. If that’s true, one wonders whether such an admission would sound less sadly relatable coming from a man in a $2,000 Zegna suit or yacht-wear. As it was, Francona wore a baggy shirt and jeans to his parting-of-the-ways press conference. He opted for a kind of class-consciousness over classiness. Tony La Russa capped his marathon march to another World Series title as the manager of the Cardinals with retirement news. His announcement was a sweeter one than Francona’s, but the patriotic denim shirt he’d thrown on over a long-sleeved, black crewneck made a similar point.

Baseball might be the only sport in which this sort of alignment with the average guy is still even plausible. Yet, the suit is a great civilizing agent, one that might have given, say, Don Zimmer pause before he charged at Pedro Martinez one 2003 evening during the ALCS and changed the way a generation of baseball watchers remember his legacy. Suits would also greatly benefit an NFL whose coaches are the most obnoxiously attired in professional sports. Is a button-down shirt what it takes to chasten Rex Ryan? I know I’m much happier being sure I’ll never have to watch Doc Rivers do his job in anything but an expertly tailored suit. At its most extreme, the alternative is a farcical crime against solidarity. The alternative is Mark Cuban — the mogul dressed as meathead fan.

There simply must be somewhere between Connie Mack’s impeccability and Cuban’s bejerseyed clownishness for the baseball manager to go. There’s often too much credibility at stake. During Game 4 of the World Series, I got punched in the head again. This time it was Texas Rangers manager Ron Washington. On his happiest day, Washington makes the pope look like Richard Simmons — that seriousness, from his Oakland A’s scouting days, is the source of comedy in one funny scene in Moneyball.

Washington is not immune to certain vanities; for instance, like La Russa, his head remains improbably free of gray hair. (For all else that was enthralling and great about those seven games between Texas and St. Louis, perhaps the most weirdly great of them all was just how Grecian the two managers seemed.) In any case, Texas shut out St. Louis in Game 4, but when Washington took the field to congratulate his team, he looked miserable. His jacket fit but was out of proportion with the tiny legs wrapped in those tight, white pants. If you didn’t know better, you’d have thought he was the freezing father of a player, not the cunning manager he is. This was the second year in a row America got to watch as Washington’s uniform mocked his stoicism and seriousness, his sense of risk and judgment. By the time the Series was over, you might have concluded that Washington was a man in need of a drink. Probably. But he was also a man in more serious need of a fedora.