The Worst-Dressed Men in Baseball 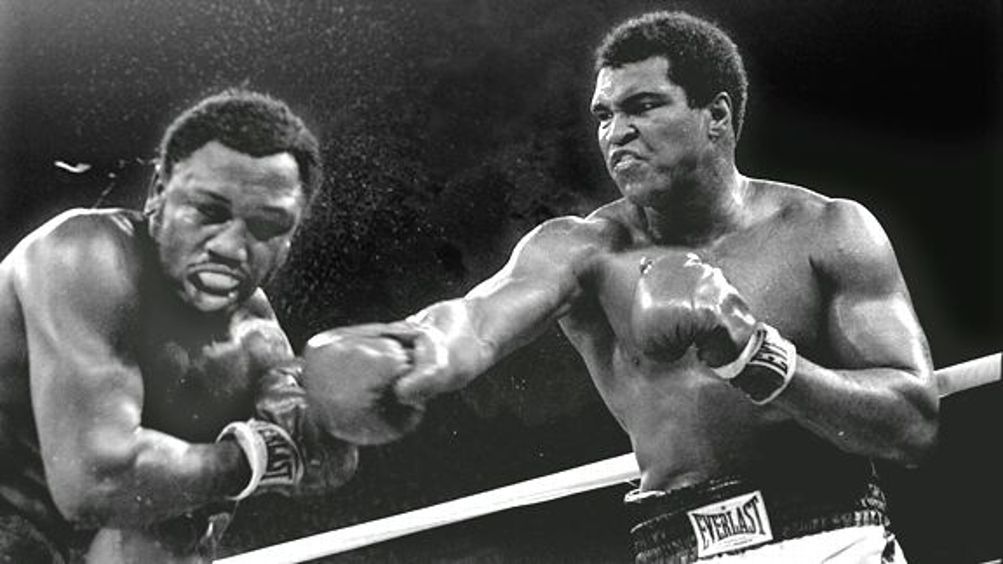 Note: With Joe Frazier passing away last night, I wanted to revisit a hastily written 2005 blog post about Mark Kram’s superb book Ghosts of Manila, rewrite it and add some additional thoughts. Call it the 2.0 version of that post.

Once upon a time, on a sweltering night in the Philippines, Muhammad Ali and Joe Frazier tried to murder each other. This happened legally, which somehow made it OK.

See, they signed a contract to “fight” each other in Manila. They wore padded gloves, trunks and sneakers so it looked like “boxing.” They agreed to fight for 15 three-minute rounds with 60-second breaks in between. They gave a trained referee (Carlos Padilla) and two trusted trainers (Eddie Futch for Frazier, Angelo Dundee for Ali) the power to stop the “fight” if it went too far. They confined themselves within a roped ring and fought furiously for 180 seconds at a time, only halting when they heard a bell … and even then, there were a couple of times when they just kept going. Thirteen times, they retreated to their respective corners, sat on stools directly facing one another, slurped water, gathered their breath for 60 seconds, stared across the ring at one another and thought about things like, “I have to kill him before he kills me.” Each time, a bell would ring. They would stand up, walk toward the middle of the ring and try to murder each other again.

During the 14th and final break, when it became clear somebody might die — probably Frazier, who couldn’t see anything out of either eye — Futch decided that he couldn’t live the rest of his life knowing that he didn’t save Frazier. He stopped the fight. A weary Ali figured out what had happened, stood to make sure, then sagged to the ground like someone had sliced his hamstrings. He spent the next few seconds lying on his back, finally sitting up and staring ahead blankly as his entourage congratulated him — not just for winning, but for surviving. This wasn’t a fight. This was something else. With all due respect to Hagler-Hearns, Leonard-Hearns, Foreman-Lyle, Castillo-Coralles and everything else on that level, the third Ali-Frazier bout went to a different place. For sweeping drama, clashing styles, mutual hatred, historical significance and sheer brutality, nothing else approached the “Thrilla in Manila.” The fight eventually ruined both men, only neither of them cared. They were fine with the stakes.

Upon hearing last night’s news that liver cancer had claimed Frazier, I found myself thinking about Smokin’ Joe’s final thoughts: whether it gnawed at him that Ali was outlasting him one more time, whether he thought about Ali anymore, whether that bitterness fades away when your life is hitting those last few minutes. I thought about 6-year-old me watching the replay of the Thrilla in Manila on Wide World of Sports, right when boxing was sucking me in — how I gravitated towards Ali and away from Frazier, how you instinctively had to choose between the two of them, even if you were only a first-grader. I considered how those feelings changed over the years as Frazier’s resentment festered and it became retroactively clear that Ali — in the spirit of promoting their fights, or whatever he was trying to do — had crossed every conceivable line. And I remembered the talented Mark Kram, a lyrical Sports Illustrated writer whose on-deadline essay about Manila ranks among the best sports pieces ever written. Thirty-six years later, we remember that fight through YouTube clips and paragraphs like this:

“Who is it?” asked Joe Frazier, lifting himself to walk around. “Who is it? I can’t see! I can’t see! Turn the lights on!” Another light was turned on, but Frazier still could not see. The scene cannot be forgotten; this good and gallant man lying there, embodying the remains of a will never before seen in a ring, a will that had carried him so far — and now surely too far. His eyes were only slits, his face looked as if it had been painted by Goya. “Man, I hit him with punches that’d bring down the walls of a city,” said Frazier. “Lawdy, lawdy, he’s a great champion.” Then he put his head back down on the pillow, and soon there was only the heavy breathing of a deep sleep slapping like big waves against the silence.

Kram expanded that piece into his 2005 book, “Ghosts of Manila,” which examines the Ali-Frazier rivalry from Frazier’s side … something that, probably out of deference to Ali and everything he meant in the 1960s and 1970s, nobody had ever really done. Even if the book treats Ali too unfairly, it’s an essential read: partly because it’s so well written, partly because he audaciously challenges the Myth of Ali. According to Kram, Ali wasn’t as savvy as his media cronies wanted us to believe, nor was he a visionary by any stretch, just a self-promoter who lit up every room, energized every television set and manipulated the media better than any other celebrity from that era. Kram also argues that Ali was fundamentally nastier than anyone wanted to admit — both in the ring (specifically, the Ernie Terrell and Floyd Patterson fights) and outside the ring (where he relentlessly hammered Frazier for being an “Uncle Tom” and cruelly compared him to gorillas and apes). And he writes that Ali was more of a reckless bully than anyone wanted to admit.

If you revere Ali and his place in sports history, it’s an especially jarring book to read. (Same for seeing HBO’s 2009 documentary, which hammered home many of Kram’s themes). How can you love Ali and defend what he did to poor Frazier? Kram preys on that moral dilemma and shifts his book’s perspective against Ali to make Frazier more sympathetic. (Mission accomplished.) At times, he goes too far. For instance, at the end of Kram’s famous SI piece, Ali praises Frazier for an entire paragraph and calls him a “great man” … an anecdote that Kram conspicuously omits from his book because it undermines his premise that Ali never gave Frazier credit. Kram also dismisses the fact that Ali may have kept baiting Frazier because — in his own shortsighted way — he knew a possessed Frazier would bring out his best. Ali had developed a nasty habit of rising or sinking to the skill level of his opponents.1 Only two boxers provoked his A-game during that stretch: Frazier and the seemingly invincible George Foreman (knocked out by Ali in 1974).

Styles make fights, and, for whatever reason, Frazier’s style became Ali’s kryptonite: a brawling southpaw with a head of granite, someone who threw punches from every angle, who kept lunging toward Ali again and again and unleashing that bitch of a left hook. Why else would Ali pick on Frazier so relentlessly? He wanted the challenge. He needed the challenge. That’s what alpha dogs do — over everything else, they vanquish. Why do you think Michael Jordan was the best basketball player ever? He deliberately sought out rivals, beat them and broke their will as he did it. The mere process of winning was never quite enough for him. He wanted to collect heads. Like a deer hunter.

You could say the same about Ali. His three biggest challenges were Sonny Liston, George Foreman and Frazier … and with all three, he went after them personally. Frazier suffered the worst abuse by far. For years and years, Ali peppered him with an endless barrage of racially charged comments, intentionally swaying the African-American community against him2 , unfairly painting Frazier as the symbol of the white establishment, and selfishly pushing himself as the voice of change, the symbol of black power and the leader of young people wrapped into one potent package. Even if the last part was essentially true in many ways, Ali didn’t need to humiliate Frazier to prove it.

Years later, once Frazier’s anguish about that verbal abuse became public, a contrite Ali distanced himself from those antics, saying that he meant to drum up interest in their fights and meant no real harm. Frazier never believed him — either afterwards or at the time — and spent the past 36 years alternately despising Ali, pretending he had gotten over what happened, then admitting that he still despised him. One thing’s for sure: Heading into that third fight, Joe Frazier genuinely hated Muhammad Ali. Even if Ali never intended to kill Frazier, he quickly realized there was no other recourse. They ended up beating the living shit out of each other. By the 14th round, when Frazier couldn’t see anymore — his good eye had closed, and his bad eye never really worked to begin with — Ali hammered him with punches the same way characters on The Walking Dead hammer those zombies with baseball bats. He hit Frazier with everything he had, his punches bouncing off Frazier’s head so violently that his hands would remain swollen for weeks. The man kept coming forward, his animus for Ali overcoming everything else. He didn’t care about his own life anymore. Muhammad Ali would have to murder him to take him out. That was the only acceptable result for Joe Frazier.

That’s what made the Manila fight so special, that’s what made the Ali-Frazier rivalry iconic, and that’s what made the next 36 years increasingly unpleasant. Frazier kept smoldering about their three fights and every mean-spirited word Ali said along the way, taking a twisted pride in Ali’s increasingly incoherent state. In 2008, the message on Joe’s answering machine actually said, “Float like a butterfly, sting like a bee, I done the job, he knows, look and see.” You could say Ali brought the best out of Frazier, and the worst, too. Ghosts of Manila bangs that message home. As one of Frazier’s cronies tells Kram, “Ali’s influenced Joe so much he’s determined the man he is today. A couple of ghosts, if you ask me. One is still in the ring in Manila, the other doesn’t even know there was a Manila. It was a bad reckoning for both, that day.” Ali outlasted Frazier that night … and again this week, when Frazier passed away. Both men lost the “Thrilla in Manila.” Neither was ever the same.

You know who else was never really the same after that night? Mark Kram. In Michael MacCambridge’s superb book about the history of SI, The Franchise, we learn that Kram sometimes sent friends out on assignment to do his research for him, and that SI fired Kram in 1977 for gross misconduct after questions arose that Kram had been paid off for positive spins with certain stories (including a flattering feature about Don King’s ill-fated heavyweight box-off). Someone as gifted as Kram should been remembered for more than just that brilliant SI piece or the book it eventually inspired, just like Frazier shouldn’t have allowed his animosity to consume him until he died, and Ali should have retired that night in Manila over scrambling his brains for a few extra bucks. It’s a bittersweet book about a bittersweet night. Maybe Ghosts of Manila isn’t as extraordinary as Kram’s seminal deadline piece, but it’s still one of the best boxing books ever written despite its aforementioned flaws. It also makes you wonder if there were three ghosts from that night, not two.