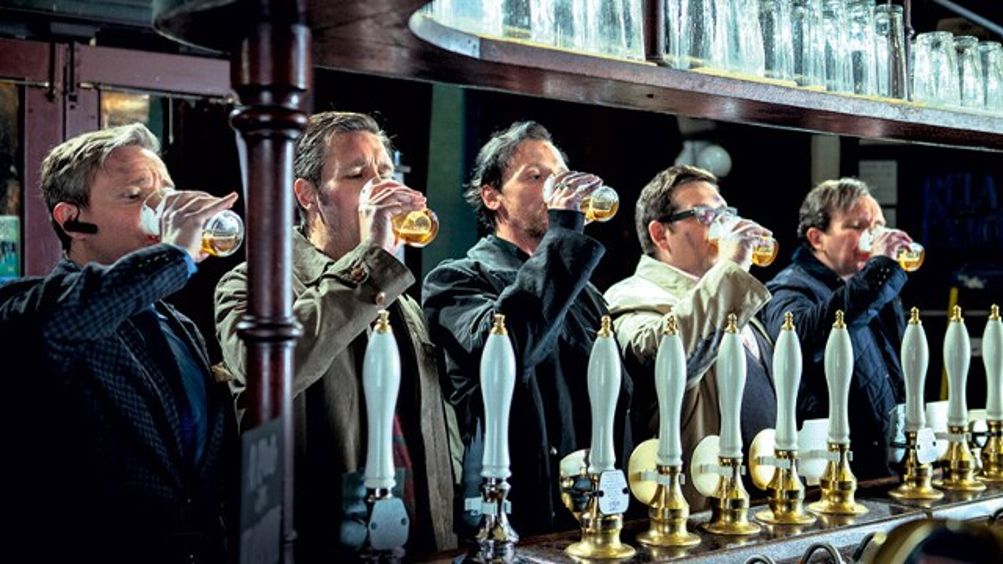 It’s possible that the summer bar for good screenwriting is so low now that when characters sound as literate as do the ones here, you laugh a little harder because you’re happy somebody cared to make the louts and drunks and bodysnatchers sound intelligent. Wright did the writing with Simon Pegg, who plays Gary King, a man-child who wants to reunite his high school drinking buddies for a 12-pub binge in their childhood hamlet. The most reluctant of the friends, a husky mid-management executive type named Andy (Nick Frost), puts his skepticism this way: “You remember the Friday nights. I remember the Monday mornings.” The soundtrack is full of early ’90s Brit-pop (Soup Dragons, Charlatans UK, etc.), but that line is a country-music couplet. Most of the writing is like that — sharp, tailored to suit different personalities, punning and poetic.

It’s hard to believe that all four of Gary’s comfortable, middle- and upper-middle-class buddies would say “yes” to this adventure — they haven’t seen him in years, and he’s still in Sisters of Mercy T-shirts, matching dusters, and combat boots, while they’re all in quilted hunting jackets and cashmere and khakis. He’s still an alcoholic. Andy’s recovered and somewhat embittered. But the actors — Paddy Considine, Eddie Marsan, and Martin Freeman play the other three — sell you their instant remorse, since it’s apparent that all Gary cares about is himself.

In itself, this would’ve made for a fine dramatic comedy: a drunk on a nostalgic bender with his enablers. But Wright and Pegg are fond of popular genres and exploring the new color created when two overlap on a Venn diagram. They also did the slacker-zombie movie Shaun of the Dead and the Hollywood-blockbuster action farce Hot Fuzz. This movie operates on a more sophisticated degree of difficulty: an old-friends reunion comedy (complete with Rosamund Pike as an exasperated woman who used to be The Girl) combined with a drunken bender film. The third coordinate reveals itself when Gary throws a young punk into a bathroom urinal and his head pops off and blue ink spurts out.

It’s some kind of alien-invasion film. But the aliens have been cleverly conceived — their mouths emit a mobile-phone, Close Encounters blue light. They shatter and spew and self-repair. The wit behind them is similar to the ingenuity it took to turn aliens into staticky black monsters in Joe Cornish’s smart but problematic British creature-invasion movie Attack the Block, which Wright helped produce.

It’s impressive how Wright, who is nearly peerless as director of camera and character movement, stages the fights so that no actor can get away with looking good. The men actually have to swing and hit and slam people over their knees. The science fiction hook is both hokey and preachy, but in getting to its punch line Wright and Pegg have conceived one of the most heartless depictions of alcoholic narcissism. Gary doesn’t just want to drink himself to death. If it were up to him, he’d keep drinking long after we’re dead, too.

A charismatic kid named Sutter (Miles Teller) gets dumped by his girlfriend (Brie Larson) and wakes up hungover on the lawn of the nicest girl in the world (Shailene Woodley). One is like an alien to the other. She wants to save him, and he wants to tarnish her halo. Sutter’s a drunk, and he might turn her into one, too. It’s a perverse kind of high school romance, but the drinking turns it gimmicky. Ponsoldt’s previous film was last year’s Smashed, about young married alcoholics. It felt like an alcoholism melodrama by a person who’d never had a drink.

Here, alcohol gives the movie, which Scott Neustadter and Michael H. Weber adapted from Tim Tharp’s novel, a very easy dramatic obstacle. But it keeps piling on the bad news until you start to resent the manipulation. The heart, soul, and natural intensity that Teller and Woodley give their acting is very much worth seeing. They’re fantastic, despite seeming too wise for parts this adolescent. That maturity only compounds your sadness for the characters: They should know better. It’s not that you stop caring about the two kids. It’s that the caring becomes overwhelming. You’re rooting for them to find a fairer movie.

In a World … , directed by Lake Bell

Yes, that Lake Bell, the comic actor some of us have been hoping would finally get a real role. But you know how it is for women in Hollywood: sad. Instead of feeling sorry for herself, though, Bell wrote and directed a very funny, very insightful movie about a woman working in a very specific corner of Hollywood: voice-overs. She plays Carol Solomon, a voice artist who’s up for a series of mega-movie trailers against her oily primo uomo father (Fred Melamed) and a younger, somehow more conceited douche bag (Ken Marino). What ensues is some broad yet pointed screwball farce about the limits of feminism, the comedy of sexism, family perversion, and, in part, that nauseating little-girl voice that’s afflicting generations of adult women.

Bell gets about a dozen other comedians and character actors in on the action, including Rob Corddry, Demetri Martin, Tig Notaro, and, best of all, Michaela Watkins, as Bell’s sister, and Alexandra Holden, as their same-age stepmother. This movie is the work of a shrewd, occasionally savage social satirist. I don’t think I’ve typed anything close to those words since Election was released. I also don’t know that Bell has anything to say beyond this film. But this one deserves to be a hit, and she deserves a chance to make a lot more.

After six years together, Marcus and Aaron (Leroy McClain and Charlie Barnett) have decided to try an open relationship. The only rule is, don’t fall in love. Good luck with that. Marcus winds up seeing Stan (Cameron Scoggins), a mope-rock musician who reeks of the Lower East Side and Brooklyn, is on-and-off with his girlfriend, Annie (Sorel Carradine), and says that, before Marcus, he’s never been with a man. Conveniently, Annie dumps Stan, claiming pursuit of a coworker (Maria Dizzia).

The gay couple is earnest and hypersensitive, the straight couple earnestly narcissistic. Liking them isn’t a requirement, but the acting is too overeager for us to care. Most of the cast is playing the situation, as opposed to playing people in a situation. Not Dizzia, though. All of her instincts are right. She plays Piper Chapman’s best, pre-prison friend on Orange Is the New Black. This movie gives her flightiness clearer air space. If Evans had actors with her comfort and curiosity and range, he could have let psychology and spontaneity save the movie from predictable emotional fallout.

Evans didn’t write this aggravating movie; Ken Urban adapted it from his play. If the movie is limited dramatically, the play must feel twice as thin. Evans, whose last movie was 2004’s ambitious, loosely historical sex drama Brother to Brother, uses close-ups and enclosures to achieve intimacy. He’s a good director of human behavior, even when that behavior sometimes makes no sense. There’s nothing he can do here about the impossible coincidences that, at least once, put all five characters on the same Brooklyn subway platform. He’s going for naturalism. But these encounters call for a cosmologist.

Of all the beery movies playing right now, this one has the distinction of being the beeriest not to feature actual alcoholics. It’s set at a Chicago brewery staffed by the young and the bearded and watches as two coworkers (Jake Johnson and Olivia Wilde) resist running afoul of their commitment to other people (Anna Kendrick for him; Ron Livingston for her). The result has the properties of a good relationship comedy with none of the wit or insight or structure. Swanberg is a hope-for-the-best director. He puts actors in a controlled social entanglement and observes them as they intuit a way out or a way further in. His yield is dubious. At 16 shortish features in eight years, he’s the Tyler Perry of so-called mumblecore, and only a few of these (Uncle Kent and Autoerotic) are better than art-privilege experiments.

But this new film feels like a minor breakthrough. If the previous movies were some kind of self-homeschooling, the loose, human feeling in Drinking Buddies is like a lesson learned. (He’s only 31.) Swanberg casts his lot with better-known actors (Jason Sudeikis runs the brewery) while staffing the periphery with a few of his regular co-conspirators. The stakes are low, and whatever screenplay there was seems rigged only to get Johnson and Wilde alone for the weekend. But Wilde is something to behold as a belching, mopey slob. I’ve never considered her fully human, but this movie has made me change my mind. Ultimately, she’s just as passive-aggressive as everyone in a Swanberg joint. But I’ll take that over the hot parsley she’s usually asked to play.

You’re Next, directed by Adam Wingard

In You’re Next, members of the affluent Davison family come together for a meal at the family manse. The basket of dinner rolls and sad plates of spinach foretell the generic and meager horror movie to come. Men in plastic animal masks (wolf, lamb, fox) and paramilitary black pick off members of the assembled party. But who could have known that the fit Australian girlfriend (Sharni Vinson) of doughy Crispian Davison (AJ Bowen) is a revenge machine with a Macgyver-like knack for contraptions and weaponizing the darnedest things? Certainly no one who remembers Vinson in Step Up 3D.

The movie, which Simon Barrett wrote, fails every test of logic. You can hear the eyes of a packed theater roll in unison once the reason for the invasion is revealed. Once we know, none of the film’s little horror ticks make sense, not the pre-invasion lurking of the masked men around the house, not the scrawling of the movie’s title on a wall in blood after Davison gets a machete to the head, not the cold reaction of even the most awful member of the Davison clan. Basically, the movie is bullshit. But it will be a hit. It enjoys skewering the rich and passes that enjoyment on to audiences. This skewering is like a Luis Buñuel class satire done as a last-girl slasher film. Only it’s neither patient nor serious enough for the kind of mockery it wants to make.

Wingard has a three-year-old serial-killer film called A Horrible Way to Die, which, like this new film, hoped to offer grisly stories with clear style and upper-middle class values, while asserting a knowing, winking self-consciousness: This crap is totally bad for you, but we know it! That’s why we’ve put the whole movie in quotation marks. The bad acting, the nonsense plot, the cheap jolts, the deserving victims: We can do it better; look at our camera framing! This is the sort of thinking that leads to PBR and 35-minute waits for $4 doughnuts: artisanal horror. As it happens, Wingard was Joe Swanberg’s Autoerotic codirector, and Swanberg plays the brattiest Davison child. The ensemble includes assorted Swanberg players — the actor-filmmakers Amy Seimetz and Ti West — and smug self-satisfaction steers the genre parody. If the guys in Swanberg’s Drinking Buddies tried to make mass-market beer it’d be You’re Next. This is the home brew of horror. It’s craft fear.

Most of the audience doesn’t know who these people are. They won’t see quotation marks. But some of them are sure to sense that something’s off. On my way down the megaplex escalator the other night, I heard a woman ask her two companions about what they’d just seen. “I don’t understand. What was everybody laughing at? I didn’t want funny. I wanted to be scared.” Sounds like she got what I got: neither.