Harry Redknapp, Rube of the Year 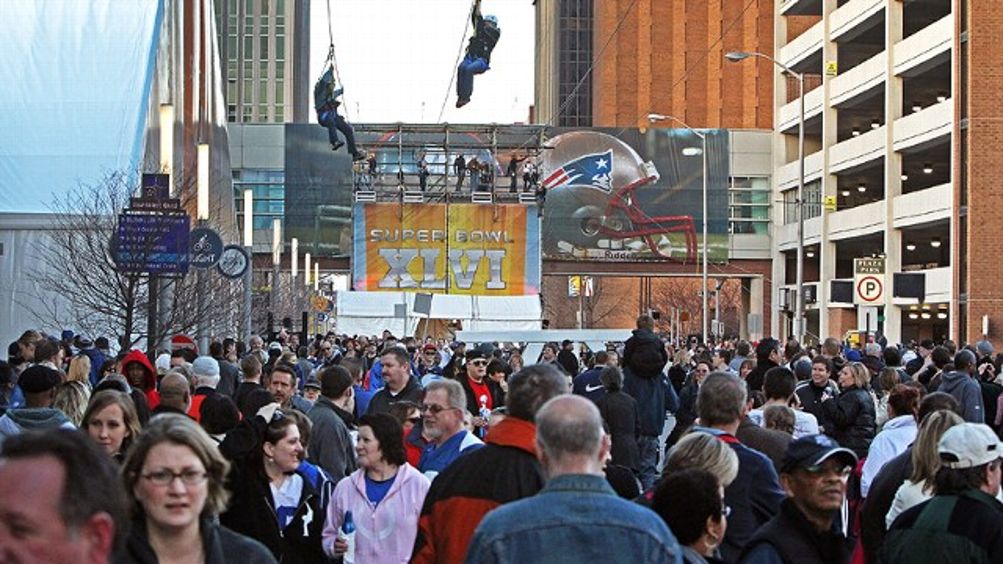 Somehow, despite XXXIII years as a sportswriter, I had managed to avoid the event formerly known as a football game until Sunday. Now, I’ll be able to tell the grandkids, “My first was in Indy.”

It was a religious experience.

By some divine intervention the weather was almost balmy — for the Midwest in February, that is. The city looked pretty, a visitor from Florida observed. “Compared to Detroit.”

Indy was friendly. Indy was “walkable,” as an airport welcomer informed me, twice ordering me to “Have a Super Day.” It was in the script.

The only problem with Indy was that every major thoroughfare in and around the Super Bowl Village — described in promotional materials as the “Epicenter of Awesome” — had been given the name of an NFL team. Which made it hard for the 8,000 exceptionally cheerful volunteers to give directions to visitors using street maps not authorized by the NFL. At least the volunteers were easy to find. They each wore a handmade blue-and-white scarf produced by a cadre of 3,000 Super Scarf makers. So many pitched in that the organizing committee ran out of yarn. The industrious Hoosiers supplied their own materials and produced a surplus of 5,000 scarves. Only the size and the palette had to be uniform: Colts colors. Knitted or crocheted, they were all adorned with a host-city patch sewn on by inmates at the Indiana Women’s Prison.

The most unlikely knitter, according to the Associated Press, was Steve Jordan, who was due to be released from prison yesterday, having served time for murder. He made three scarves, and said he would have done more if not for the prison rule preventing inmates from taking plastic knitting needles back to their cells. The most enthusiastic producer was Beverly Meska, a retired school secretary, who crocheted 250 of them. Lori Dunlap got one of hers. “I got a note inside that said, ‘I’m 82 and I’ve been crocheting since I was 16.'”

Warm welcome scarves were set aside for the Giants and the Patriots. Only one of the 150 scarves allotted to the Pats was declined — by coach Bill Belichick.

Indianapolis proved to be the perfect Super Bowl city, accommodating in the truest sense of the word. Other towns — Miami, New Orleans, and, coming soon, New York — mistakenly think they’re bigger than the Super Bowl. “Naptown,” as local teenagers call it, had no such illusions.

Indy presented itself as a tabula rasa willing, ready, and able to remake itself in the NFL’s image. Local artists painted over the city’s most offending eyesores with murals commissioned by the Indianapolis Arts Council. I didn’t see all 46 of them, but of those I saw, my favorite was Pamela Bliss’ 38-foot portrait of Hoosier Kurt Vonnegut, who had a brief fling as a writer for Sports Illustrated. I sure would have liked to read his take on this.

Every other square inch of downtown was sheathed in plastic wrap provided by a local company, Sport Graphics, which draped the JW Marriott tower with a 32-story likeness of the Vince Lombardi Trophy. The city’s most distinctive landmark, the Indiana Soldiers’ and Sailors’ Monument, became a monument to NFL-style monumentality. Twenty-foot-high Roman numerals, XLVI, dominated the circle, obliterating the town’s own iconography and dwarfing the eensy-weensy logos of the Super Bowl teams, not to mention a man carrying a sign that said, “Jesus Forgives Sins.”

The next day, I introduced myself to Mark from Minnesota, an emissary from streetpreachers.com who was wearing a blue baseball cap with yellow lettering that said “Cover Your Breasts” and carrying signage of doom.

The words “homosexuals” and “hell” appeared in dripping blood-red paint. My new favorite cool kid, Alex Linebarger, a senior at the Park Tudor high school in Indianapolis, said, “Yeah, like I’m sure the Bible says, ‘all potheads.'”

Her mother checked. Nope, no dope in Revelation.1

I asked Mark if he was looking forward to Madonna’s halftime show. He shook his head sadly at the mention of the headliner with the biblically appropriated moniker. “It’s her fruit. It’s a heart issue just like any other sin.”

A Giants fan in a no. 10 Eli Manning jersey Tebowed at his feet. “He’s a mocker,” Mark said.

When I asked if I could quote him, he said sure, and gave his name as John.

“I thought you said your name is Mark.”

“I go by Ezekiel,” he replied.

There were women in six-inch-high fuck-me shoes swinging golf clubs on digital fairways. There were college girls recruited off the Indiana University campus in Bloomington getting body painted and then hitting the dance floor naked except for blue and silver swirls covering their breasts and strategically placed foliage.

There was a grown man wearing an inflatable Patriots helmet and another wearing a hand-tailored Patriots suit made for him by Mr. Han’s Custom Tailor of Osan, South Korea. It cost $180. He got the matching white patent leather shoes from Goodwill for $5.00.

There was an 18-foot-tall likeness of the New York City skyline carved into 60 300-pound blocks of ice: the Statue of Liberty, the Empire State Building, the Met Life Stadium (site of Super Bowl XLVIII), and Snoopy, filling in for the Twin Towers.

There was a cohort of demonstrators protesting Indiana’s new anti-union right-to-work law, shouted down by marauding gangs of jersey-clad partisans bellowing at each other: “Giants!” “Pats!” “Giants!” “Pats!”

By Saturday night, the crowd at Monument Circle had grown into the thousands, all of them standing in a raw winter mist watching Super Bowl highlights projected onto Roman numerals. They brayed at a canned, thumping rendition of “This Is the Moment” and drowned out the play-by-play: “Oh, what a catch!”

And I had to wonder, What Would Jesus Do if confronted with such a tableau?

“He would say, ‘Go Giants,'” said Alan Schwartz, a retailer from Queens, New York, as we entered Lucas Oil Stadium.

Needing to get my game face on, I stopped by the Verizon booth inside the North Gate that featured a 4G Reaction Challenge, offering all comers the opportunity to get down in an offensive lineman’s four-point stance and fire off the ball. I cut in line in front of two boys in Giants jerseys. It was now or never. “You have to sign a waiver,” Nicholas Donofrio said.

I was wearing the wrong shoes.

Though one guy in my section liked them enough to offer $100 for them.

In Section 102, amid the crass, the glitter, and the strobes, I found Reggie Dabbs. It was hard to miss him. He’s a big guy and he was sitting right in front of me. He played a little football back in the day for Johnny Majors at Tennessee. “A benchwarmer,” he calls himself.

After two years of that, he transferred to a school in Minnesota, where a professor told him he liked his delivery and that his words could change lives. Reggie became a high school motivational speaker. He is also a saxophonist and an evangelist. He has quite a story to tell. “My mom got pregnant as a teenager. She had a son. Years later she got pregnant again. She told her parents and they said to go to school. While she was at school they moved and didn’t tell her.

“She ended up living in a halfway house for pregnant girls. She was pregnant with twins. The counselor told her she should put them up for adoption. She said, all she has is her kids.

Reggie politely extricated himself from the conversation. It was time to watch some football.

Which was beside the point to those among the 68,000 fans at Lucas Oil Stadium and in the global NFL village who were waiting to find out how Madonna would deliver on her pregame pledge: “I’m going to come in halfway between the church experience, and I’m going to have to deliver a sermon that’s going to have to be very impactful.”

In one dizzying 15-minute set, Madonna cast herself as The Most Beautiful Woman of the Ancient World (careful, honey, you’re 53), a pom-pom-wielding cheerleader, and the Unlikely Lady of pop piety. Hauled to the field on a gigantic throne by a platoon of soldiers, this gilded vision of Cleopatra was attended by acrobats and a guy from Cirque du Soleil walking the high wire in a tunic. Then: She morphed into a postmodern pompom girl whose purity was undercut by her compatriot, the British rapper M.I.A., who had what one headline writer called a “finger malfunction.”

In her final incarnation, Madonna draped herself in all black, cosseting herself in mock religiosity. Surrounded by gospel singers in black and white choir robes, she belted out “Like a Prayer.”

Which is different than an actual prayer.

I was disappointed. I wanted to hear “Like a Virgin.” I wanted to see her arms. Having watched the New York Daily News slideshow, “Madonna’s Biceps: A Retrospective,” I wanted to see for myself whether those things dangling from her shoulders were arms or gnarled fishing rope. I bet she can really fire off the ball with those babies.

But Madonna sheathed herself in black from shoulders to fingertips as if in an actual place of worship. After she disappeared through a trapdoor in a puff of smoke, the players retook the field. My dad’s team, the New York football Giants, for whom he worked as a water boy in 1927, put the Pats in their place. I’d like to think he would have doused Tom Coughlin with Gatorade.