Director’s Cut: ‘Back in Play’ by David Remnick 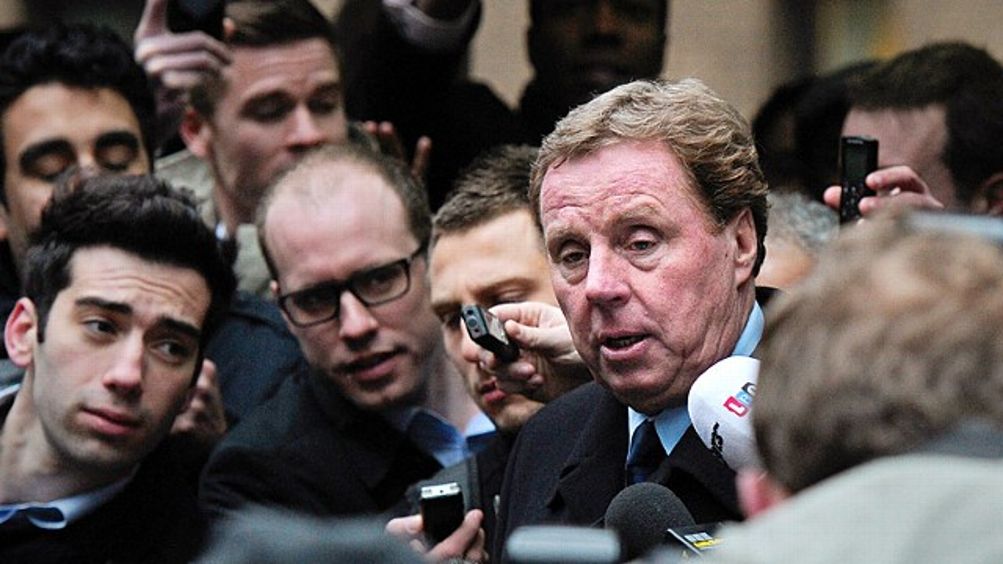 Harry Redknapp does not have a soul, but he has a sort of dead-eyed Cockney sparkle that’s served him as a pretty adequate replacement. England’s most successful English soccer manager, he’s also England’s most successful allegations-shrugger-offer, “Who, me?”-expression-haver, preposterous-quip-to-distract-your-attention deployer, and crafter of bespoke logic-annihilating narrative Möbius strips. When 60 police officers crash-swarmed his house as part of a conspiracy sting in 2007, Harry insisted that they were merely soliciting his help catching other people. “They have to arrest you to talk to you,” he straightfacedly told the press. Oh, of course!1 When questioned, during his tax-evasion trial last month,2 about the secret Monaco bank account he’d named after his bulldog Rosie, he produced one of the greatest answers in the history of criminology. “I don’t even like calling her a dog,” he said. “She was better than that.” The jurors returned a verdict of not guilty. I’m pretty sure some of them high-fived.

There’s something about Harry Redknapp that makes you want him not to be guilty, even though he is, always, of everything he’s ever been accused of, and definitely also of much more. I have no evidence to support this, which would enable me, if I were on one of the almost infinite number of Redknapp juries that could plausibly be convened in the future, to find him not guilty. But I’m sure that it’s true. You don’t believe for a second that Harry’s capable of self-reflection, much less of “having a conscience” or “practicing forbearance” or “experiencing remorse.” You just find him not guilty because he makes being not-not guilty look like so much fun.3

Here are some highlights from Harry’s career. Don’t try to pretend this isn’t kind of horrifyingly fabulous.

As the flagship member of a generation of English football coaches who have been more or less comprehensively left in the dust by their foreign counterparts,4 Harry derives part of his charm from the idea that he’s a last point of contact with an older, purer form of football, a living zipline back to the days when all matches were played in the rain and nobody knew anything about tactics. “Just fucking run about,” Harry once told a striker who didn’t speak English. In these days of Xavi and false nines and “can Lampard play with Gerrard,” there’s a deep need in the English footballing psyche for a distinctively English way of approaching the game that doesn’t go numb in quarterfinals, and Harry exploits this the way he exploits everything else — cheerfully and with a Boer War’s-worth of dropped h’s.5 Had the tax-evasion charge led to anything more serious, I’m convinced he would have sent Tottenham out in a WM formation. But he gets away with it because he has a face like tipsy bread dough and can’t stop telling stories like this:

My dad would watch Jamie every week at Liverpool no matter where he played. He would get the train. My mum would make a cheese and pickle roll for Jamie to eat after the game. Now remember, Jamie’s playing for Liverpool. Jamie would meet my dad after the game and take him back to the station and once Steve McManaman was in the car with them. My dad said to me: ‘I felt bad I because I had a roll for Jamie but not Steve McManaman.’ So I said to my dad: ‘A roll? He’s getting thirty grand a week!’ But every week after that he had to take two rolls, one for Jamie and one for Macca. That was his life, never missed a game.

Liverpool, cheese-and-pickle rolls, grandfathers, Steve McManaman. Harry somehow makes you believe that English soccer, a game whose face-first slide into globalized commercialism is a source of mass anxiety, is really a simple old thing, straight out of “Autumn Almanac,” just men and their snacks down through the generations. Moreover — and this is the real magic trick — he somehow does this while himself serving as the most visible representative of the dark side of commercialization. How can kickbacks and tapping-up and runaway club debt be so bad if Harry’s there to tell you about the Christmas pudding his Aunt Rosie baked for Bill Shankly? And by the same token, why worry about Manchester City-branded motorbikes in Thailand when an English manager has his club in the top three?

On Wednesday, the same day the jury in London handed down the not-guilty verdict, Fabio Capello gave in to the inevitable and resigned as manager of the English national team. As of this writing, Harry’s the bookies’ favorite to replace him. Landing the offer — not so much failing upward as getting exonerated upward — would be classic Harry. He’d be crazy to take the job. England is a mess, and the European Championships are only four months away. It would be like coaching the Charge of the Light Brigade. He would have no chance of winning. And the entire Harry edifice is built on success.

On the other hand, we already know he’s crazy, right? I mean, it would be like coaching the Charge of the Light Brigade! Why not do one last outsize deed before retiring? Why not drive up the advance on the next autobiography? England’s been waiting for a cheeky homegrown rascal to take over the national team since Brian Clough was passed over. The old comedian must relish the thought of taking his final bow on the biggest stage of his career. It would be the most ridiculous, and maybe the best, possible move, both for England and for Harry himself. They wouldn’t win a tournament, but the press conferences would be amazing. No matter what he was accused of, Harry would simply look pained, give his eyes a cynical twinkle, and yank the tarp off some devastating quip. He could fly in a private jet. He could keep rolling the way he always rolls: ten miles high, impossibly brazen, and spotless as a ghost.

Filed Under: Future, Series, The Future