Wedded Blitz! Do or DIY 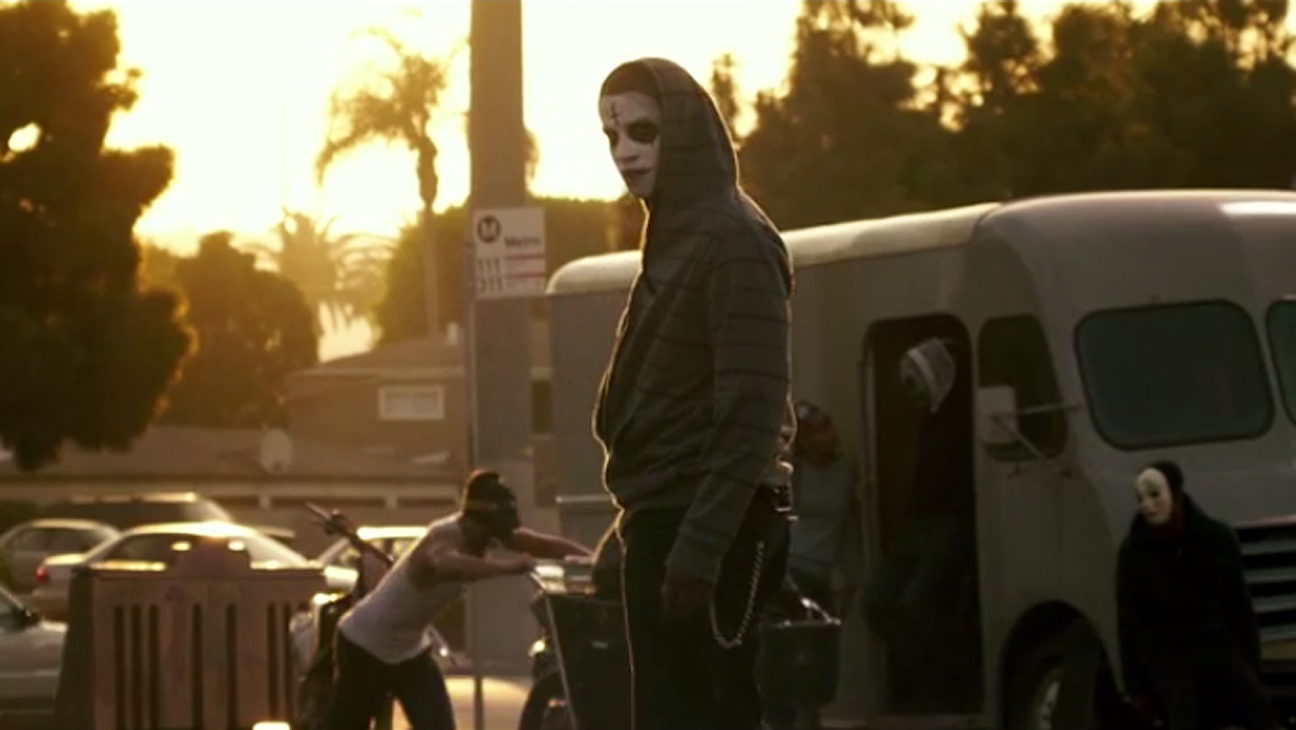 Nobody gets to be a hero in The Purge: Anarchy, not for long. But the actor Frank Grillo really has something. It’s not range or big talent. It’s a life-size, working-person’s version of macho gravitas. He’s had minor parts in lots of movies that require him to wear stubble and Kevlar. That’s fair. Like Harvey Keitel and Michael Madsen, he’s got the handsomeness of some cops or construction workers. He could walk off the street and onto one of those calendars. In this movie, he’s playing a guy named Leo Barnes, whom everyone calls Sergeant, who roves tentatively at night around Los Angeles in an armored car.

The reason is that the government, in the year 2023, has let the country fall apart. For 12 hours every March, society is permitted to collapse into lawlessness, just as it had in the 2013 sleeper hit, The Purge. People are free to kill without incrimination. The program has been sold as an opportunity to unleash and purge aggression. Really, it’s a not terribly opaque conspiracy to further enrich the country’s arms manufacturers, limit population growth, and cut the unemployment rate, mostly by slaughtering the poor. This apparently is news to everybody except an outfit of black radicals, whose leader (Michael K. Williams, in John Lennon spectacles and a beret) posts videos vowing to strike against the empire.

In the meantime, Sarge just appears to be looking for personal revenge. Grillo is expressive enough to seem sad as his Batmobile lurks in the shadows. His solitude doesn’t last. He happens upon a woman and her daughter being hauled into a tractor-trailer by masked soldiers. He tries to talk himself out of saving them, but, again, Sergeant is a sergeant. I could have watched him drive around an empty downtown for 100 minutes, but by the time he saves those two women and a young couple (Zach Gilford and Kiele Sanchez, actually married) stow away in his backseat, I was ready to give up, and not because writer and director James DeMonaco isn’t on to something. It’s that what he’s on to (federally sanctioned class warfare) is often illogically executed and annoyingly acted. If Sergeant’s sense of vengeance has direction, why not take it there straight away? What’s with the dillydally?

The woman and her teenage daughter are Eva (Carmen Ejogo) and Cali (Zoë Soul). Eva works as a waitress at a diner and has just failed to get the raise that Cali was counting on. Ejogo has a strong face, but over and over she’s required to weep and scream and, on one hilariously inconvenient occasion, fall down while fleeing. She’s not allowed to be more than limp.

The car of that stowaway couple happened to run out of gas just as the Purge was getting under way, and they’re just as weak and needy. They’re all talky and openly desperate for Sergeant to get them out of jam after jam (a domestic drama gone wrong, the killer Mexicans around the corner, the punks in the traffic tunnel driving a car with a flamethrower). Sometimes they try self-defense. Mostly, it’s “Please, help us!”

If the Paul Haggis Best Picture winner Crash were an asteroid that hit Earth, The Purge: Anarchy would be its postapocalypse. To be fair, this is just the kind of acting — and the sorts of characters — you also get in OK action movies and horror-thrillers. The original Purge had Ethan Hawke defending his home from invaders, and he just seemed like a bonus. Grillo’s stoicism is even better for the occasion. He’s sculpted from classical action-hero steel. But DeMonaco is more interested in scenarios than in stocking them with human beings. Everybody here is a backstory in a T-shirt.

It’s the premise that’s the hook, and its hook isn’t terribly dissimilar from the moral apocalypse of the Saw series, where sadistic contraptions were supposed to punish and sometimes repunish the bad and the evil. Normally, for social commentary, you’d get a George Romero zombie allegory or vampires, apes, or Katniss Everdeen. DeMonaco throws militarization at our problems, and he’s not kidding. The Purge movies are envisioning dystopia run by an unseen government outfit called the New Founding Fathers of America, which has a nice tea party–style ring to it. That kind of totalitarianism is supposed to be creepy. But it’s the closing credits that create the biggest scares. In them, heavy metal blasts over reconstituted American flags, with guns, grenades, and brass knuckles where the stripes should be. What’s being satirized is American bloodlust — or something like that. DeMonaco seems to feel entitled to have it both ways, but awkwardly — a trigger finger that wags, too. Inequality, immorality, and bad government might enrage these movies, but they thoroughly enjoy the splatter of all blood.

It’s funny. Sex Tape is about a man having sex with Cameron Diaz, and at no point after the video of their drunken three-hour tryst is accidentally distributed did I wonder about the video’s contents. That’s only partially because the man is played by Jason Segel, whose economy-size frame has been transformed into a body meant to make sense atop, beneath, and pretzeled with Diaz’s. He might have overexerted himself in preparation. All the usual athleticism in his face is gone. He looks as sad and as pooped as the movie is.

Diaz and Segel are Annie and Jay, married parents in the Los Angeles area whom we see humping their way through college but who as wedded grown-ups have grown clueless about sex with each other. Between his sitting near a bunch of CDs at work and her mommy-blogging from the living room, there’s just no time to fuck anymore. They make an intimacy appointment that leads to failed sex (how, he asks, have we forgotten how to do this?), which leads to Annie suggesting they make a porno, which leads to an epic night re-creating the recipes from The Joy of Sex.

Obviously, Jay fails to properly delete the video from the iPads he donates to friends and strangers (because, for implausible music-oriented reasons, he goes through them the way reporters go through notebooks. This is a Sony movie that may as well be by Apple). Jay finds out only because taunting texts pop up on his phone. As he and Annie run around town trying to recall the iPads, it seems clear that the movie has no idea what the joke is. Maybe it’s that adults have no technological common sense. This alleged crisis could have ended minutes after it began. But that would mean a movie with barely a 40-minute running time. So why not have Rob Lowe try playing an Internet nebbish who wants to buy Annie’s blog? Why not have Jay and Annie show up at his mansion to steal the iPad she gave him that is still in its leather case? Why does she give it to him? Why does he accept it? Because, sadly, we need a brutally long sequence that juxtaposes Jay running from and beating up Lowe’s German shepherd with Annie and her prospective employer snorting cocaine and listening to Slayer.

Later, there’s a trip to the home of their best friends, played by Ellie Kemper and Rob Corddry, who wind up seeing the video and fogging up Annie and Jay’s car. The four of them sit in a living room and talk through various scenarios, and there’s not a single laugh. It’s strange to watch a comedy full of talented people that does not work from the opening scene. It’s like eating food and not tasting anything. Segel wrote Sex Tape with Nicholas Stoller and Kate Angelo; Jake Kasdan directed it. You get the sense they started down this road and couldn’t turn around. I mean, Segel went to the gym a lot. Kasdan brought us Segel and Diaz in Bad Teacher. As viciously juvenile and condescending about public education as that movie was, its viciousness was itself a virtue. Sex Tape winds up doing something cynical: roping in Annie and Jay’s kids and making pronouncements about the value of family. At one point, they do so at the mercy of the owner of an adult-entertainment website played by a famous comedian. He helps steal the movie by rattling off fake porn outfits, like Nutflix. It’s petty theft. But it’s needed, like water to the dehydrated.

I thought Date Night would have ended the nonadventures of the bored, straight, white, and upper middle class. But popular culture has returned to combating and exploring the doldrums of a particular kind of marriage. Just this week, three cable shows — You’re the Worst, Married, and Satisfaction — started bringing more tales of the pros and cons of coupledom. Sex Tape seems to be going in a different direction. It wants a similar depiction of the hot married sex advertised in Beyoncé’s “Drunk in Love.” That song had a ridiculous, blown-sideways ecstasy (“We woke up in the kitchen saying, ‘How the hell did this shit happen?’”) that never happens in the movie. You just watch Diaz and Segel trying to reel in their sex binge and keep waiting for the purge to start.