The Two Lines That Never Cross 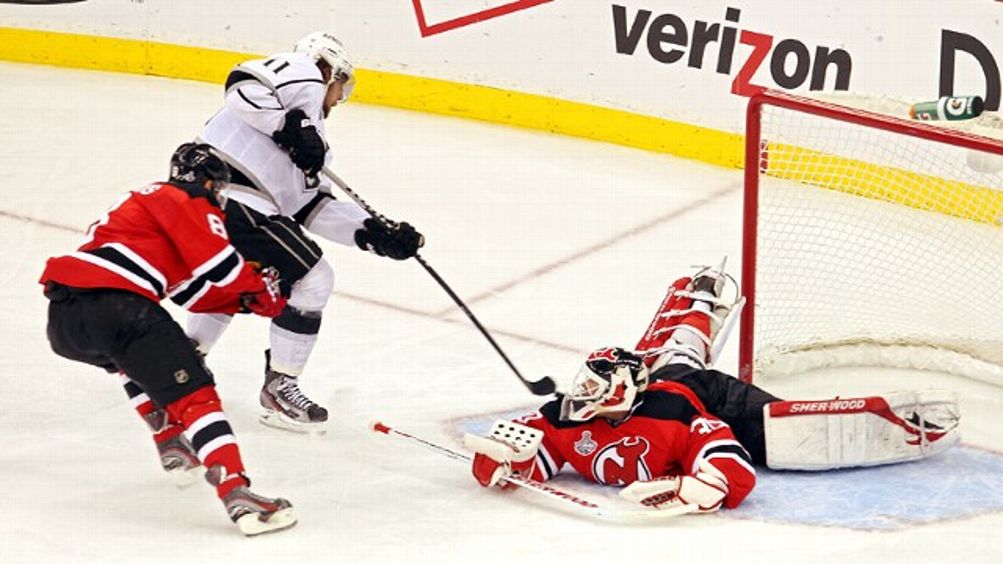 There’s really no getting around it: Game 1s (or is it Games 1?) are inherently awkward.

Transitioning from a heated conference final against a divisional rival to that first stare-down with a relatively unfamiliar opponent is a little like storming out of the comfy apartment you shared with your significant other and right into the arms of some day-drinking stranger with a murky backstory and an indecipherable tattoo. The intimate becomes the alien. One minute you’re watching TV in your best sweatpants on the sofa, and the next you’re making Parks and Recreation jokes and getting blank stares.

And so it was with the opening salvo between the Kings and the Devils last night in Newark. Both teams spent the first two periods eyeing one another, nervous and a little bit fumbling. Viewers tuning in to the first two periods on TV must have wished they could get some of Ilya Kovalchuk’s smelling salts.

But as the evening went on, the two teams settled into a rhythm that became increasingly fun to watch. The hits got harder, the passes got crisper, and everyone stopped icing the puck so damn much. Anze Kopitar’s game-winning breakaway in overtime — more on that later — ended the game in much better style than it had begun.

“That was not really the plan, to feel them out for two periods,” Kopitar said.

For both the Kings and the Devils, it didn’t take long for the unknown to become the old hat. New Jersey found itself back in a familiar position: trailing a series 1-0, just as they had against the Flyers and Rangers. And L.A. won its ninth straight game on the road this postseason — although head coach Darryl Sutter took issue with that stat.

“We won one on the road,” he said. “Season started today, tonight.”

Anze Kopitar’s overtime goal was the sort that took place in dreamlike slow-motion; I half-expected him to rip off his helmet afterward and reveal himself to be Leonardo DiCaprio’s character in Inception. A series of breakdowns by the Devils — the worst of which was Dainius Zubrus’s bad decision to go after the puck instead of picking up Kopitar — led to the goal that silenced a boisterous Prudential Center crowd.

Justin Williams saw his teammate alone, so very alone in the center of the ice. As he would later tell it: “That’s when you just throw an area pass over there. Hopefully he skates into it and hopefully it’s timed right.”

It was. “He chipped it, obviously perfect, right on my tape,” Kopitar said.

After a bit of hilarity in the postgame press conference — erroneously asked why he chose to go backhand on the shot, Kopitar replied, “Um, I went forehand” — the Slovenian forward ended up revealing a memory so fine it rivals his stickhandling. Told that Martin Brodeur had said he expected a backhand, Kopitar casually hypothesized why this might have been.

“I guess that goes back a few years when we were in the shootout in L.A. and I went backhand on him,” he said. “Maybe he thought I was going to do it again.”

A few years, and then some. The game he was referring to took place in November of 2006, and ended with the declaration that “Alexander Frolov has won it! For the Los Angeles Kings!” That is one deep freaking cut, Kopi.

“Worst performers” is way harsh, Tai, but let’s just say that several players on the Devils may have spent last night pondering missed connections, and I don’t mean trawling Craigslist.

A beautiful first-period passing display by the Devils was reminiscent of the one that had preceded Ilya Kovalchuk’s Game 6 goal against New York — until it culminated in David Clarkson firing the puck wide. Later, Clarkson missed the net again, this time on a juicy rebound in the slot.

A few minutes into the third period, a scramble in front of Quick led to the puck sliding into the net. But a video review showed that Zach Parise had swept the puck over the line with his hand, and the on-ice call of no goal was upheld. Worse, though, was what happened immediately before that: Parise couldn’t get enough of his stick on a bouncing puck right at the goal mouth — an area where he’s usually at his finest.

Defenseman Mark Fayne’s miss may have been the most dramatic, though, coming as it did with the game tied midway through the third period. But much of the blame goes to the Prudential Center ice, which was bouncy and unpredictable all night long. (That’s … what he said?) Players from both teams, from Martin Brodeur to Dustin Penner, criticized the conditions. “It was like playing with a tennis ball,” Dustin Brown said.

“[The puck] just kind of hopped up at the last second,” said Fayne of his mishandle. “I got a little bit of it, but not as much as I would have liked to.”

The number of missed opportunities for the Devils was, depending on who you spoke to, cause for optimism or alarm. On the one hand, the fact that they kept the game so tight while still playing what many considered to be their worst game since the first round could mean good things on a night in which the bounces were going their way. On the other hand, letting those sorts of right-there chances slip away in the crucial first game of the series could come back to haunt them. Who knows if they’ll see so much of the net again?

Before last night’s game, Gary Bettman stood in the front of the interview room addressing the media in his typically upbeat way, noting that the league had earned a record $3.3 billion in revenue in 2011-12. (Asked about profits, and about the state of the Phoenix Coyotes and New Jersey Devils, he fired up his lawyerly talents of obfuscation.)

In the back of the room, seated not in a chair but on a platform meant for TV cameras, was Donald Fehr, trying his best to be conspicuously inconspicuous. When Bettman finished speaking, a great many reporters gravitated to Fehr, the famous former negotiator for baseball’s player association who is now the director of the NHL Players’ Association and will be leading the upcoming CBA conversations. For the first few minutes of his impromptu Q&A, he didn’t even get up off the floor.

It’s unsettling to talk to someone whose whole thing is mastering the art of getting what he wants. Fehr was at once cryptic and forthcoming, charming and a little bit cold. (Now that I think about it, Bettman could be described the same way.) Even his jokes seemed to carry deep subtexts.

“Don’t you like me in this job?” he asked, in response to a question on whether the players would again agree to roll back salaries the way they did, by 24 percent, in 2004. (He went on to say that the players “recognize they made enormous concessions in the last round of bargaining.”) Later, he made a humorous reference to his success negotiating on behalf of MLB’s players. It wasn’t lost on anyone that his work there included a World Series–canceling strike — and I say that not out of judgment, just total fear.

Buckle up, kids: This one could get ugly.

A kazoo, a drum,
A goddamn vuvuzela
The Rock’s symphony.