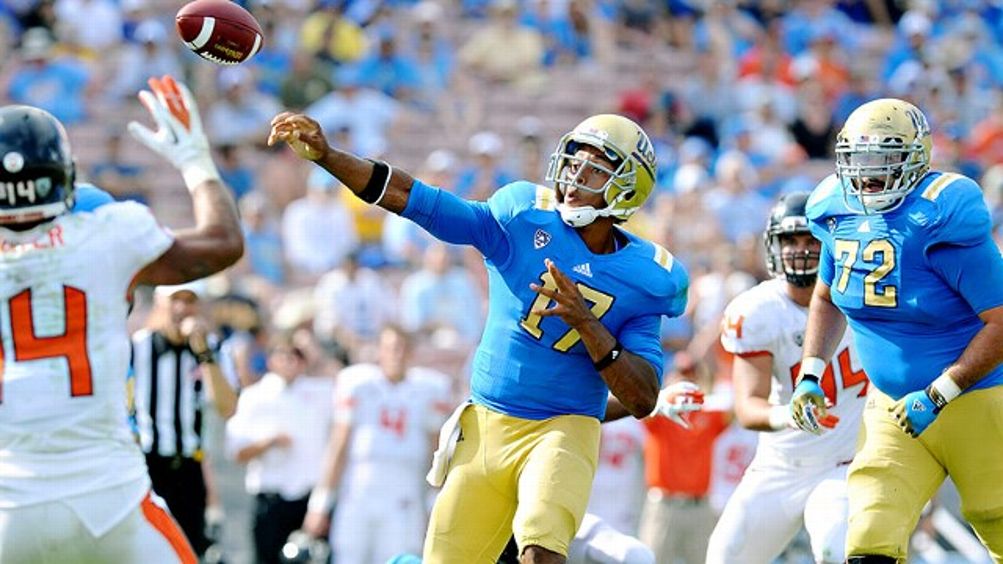 And then there were all of these other diversions that Los Angeles just naturally offers: surfing, sky diving, topless motorcycling, translucent miniskirting and teen-age protesting for the individual’s inalienable right to smoke his front lawn.” — Dan Jenkins

The Rose Bowl is the most aesthetically gorgeous venue in college football, and this makes it a great place to attend a flea market and a problematic place to play your home football games. Last Saturday, UCLA hosted Oregon State, and I strolled past several wine-and-cheese tailgates, posted an Instagram photo of the scenery, and walked into a stadium that holds 90,000 people and was barely half-full. I spent large swaths of the afternoon distracted by the beauty of the San Gabriel Mountains, speculating about Pasadena real-estate prices, and scouting for black bears in the hills. And maybe it shouldn’t have been this way, given that UCLA was 3-0, but everything about Los Angeles tends toward placid diversions, and, in most regions of the country, football is anything but a placid diversion. If we really get down to it, this is what the fight over whether football belongs in Los Angeles is really about, isn’t it?

Still, this was shaping up to be the season that L.A. became a football town again, even without an NFL team as its flagship distraction.1 This appeared to be the moment that USC would once again compete for a national championship, and this appeared to be the moment that UCLA would not actually collapse under the weight of their own modest hopes, and this appeared to be the moment the USC-UCLA rivalry would again evolve into something more than a Pacific Daylight Time novelty, with last year’s 50-0 USC rout serving as its nadir (or zenith, if you’re still pissed off about Tokyo Rose). Things were looking so promising when I flew out to California a week earlier, and then the Trojans lost at Stanford and Lane Kiffin channeled Alan J. Pakula and suddenly all those Bruins fans who hadn’t had a leg to stand on since the Gaston Green days found their very young squad to be the center of the city’s collegiate attentions.

Those who did know better could predict that a fall was coming, because this is what UCLA does best: It builds expectations, and then fails to live up to them.2 The Bruins haven’t made a Rose Bowl since 1998, the longest drought in school history; for most of the aughts, they lived in the perpetual shadow of Pete Carroll’s USC teams, and every time they attempted to alter the city’s power dynamic — as they did briefly under Red Sanders in the 1950s, Tommy Prothro in the 1960s, Dick Vermeil in the 1970s, and Terry Donahue in the 1980s — their efforts were eventually stanched.

Maybe it’s unfair to channel the pessimism of the past, or to assume that the Bruins will simply fold their cards again as this season develops, given that this is Jim Mora’s first year as head coach.3 But there was much talk in the preseason about the Bruins holding training camp in the desert near San Bernardino and about Mora’s strategic (and uncouth) dart-throwing, and a building sense of hype about Mora as the crosstown parallel to Pete Carroll. (Mora is not dumb; he knows it would be best to gain a recruiting advantage now, while USC’s scholarship numbers are still depleted, post-probation.)

And then, last Saturday, as the Bruins prepared to launch a Heisman Trophy campaign for Johnathan Franklin, the running back rushed for 45 yards on 12 carries. The Bruins, with a freshman quarterback who is still getting his bearings, were outplayed by the second-best team in Oregon, once again rendering themselves the second-best team in their own city. By the time I left the stadium, the parking lots were nearly empty, and those who remained seemed to do so in order to catch a glimpse of a breathtaking pink sunset over the mountains.

Then again, maybe there is something to be said for being second-best. I don’t really have any idea how good Oregon State might be by the end of the season, but at the moment, they are 2-0, with consecutive wins over ranked teams for the first time since 2000. They also appear to have the nicest coach in college football. After Oregon State’s 27-20 win, Mike Riley emerged from the locker room with two fingers raised, cradling an adorable child who I believe was related to him. But then, Riley — who once turned down the head job at Alabama, a wise move for all involved — strikes you as the kind of guy who kisses babies on demand. The first thing he said was, “I gotta find my wife,” and once he did, he spoke to the press in an aw-shucks voice that made me think we’d surely surrounded one of the trainers by mistake. When he was finished talking, he loaded his players onto the bus and stopped at In-N-Out, a straight-up Little League flourish that would cause Nick Saban to go animal-style on a pimpled short-order cook. 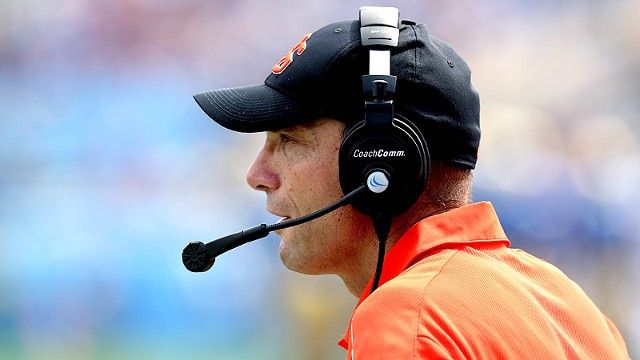 Riley seemed legitimately overjoyed to have won this game; he grew up in the sleepy little burg of Corvallis, where OSU is located, and this is his dream job. He quit it once in 1998 to become head coach of the San Diego Chargers, and I imagine he’s never going to quit it again, though after a couple of subpar seasons, there were some rumblings about his job status. I don’t know if you can say he’s ever made the Beavers a nationally relevant program, but he’s made them about as good as you can expect them to be, given that they’d won a total of 14 games in the seven seasons before he first became head coach. They do not have the budget or the facilities or the Just Do It money or the electroshock uniforms of their downstate rivals in Eugene, and they probably never will. But Riley is something of an offensive mastermind, and his teams regularly upend ranked opponents and produce first-rate skill position players even if they’ve never really achieved season-long consistency, and this is enough to pacify a fan base that isn’t quite as overzealous as the heavies in Tuscaloosa.

On November 24, the Beavers will host Oregon in the rivalry game known as the Civil War. There is a possibility that this matchup will be freighted with Pac-12 postseason implications, but I imagine the Beavers will lose a game or two (or three) before then, and I imagine that Oregon — which has won the last four Civil Wars by an average of 19 points — will prevail once again, because even the powerful incentive of Double-Doubles cannot overcome a pack of leopards. This is just the natural order of things, and it is never easy to defy that order, neither in a small town with nothing to do nor in a city built on glamorous diversions.