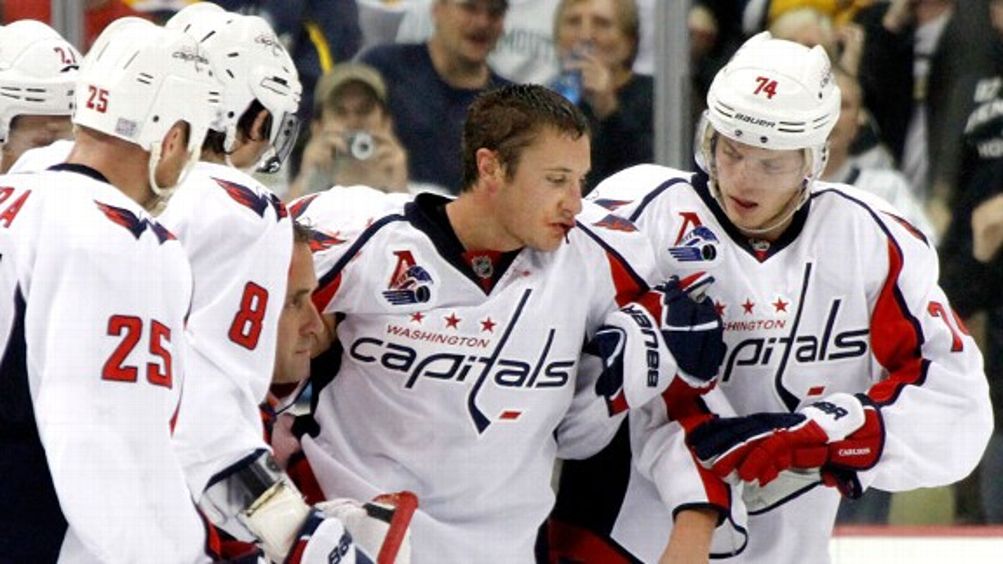 The Hockey Night in Canada broadcast crew called it for Hall, not changing their minds even upon slowing down to reexamine the footage. Later Zapruder-style frame-by-frame dissections seemed to back up their instincts, albeit with the same level of clarity present in the infamous Dallas film. But the league officially credited Nugent-Hopkins, earning him his third of the night, his first hat trick in just his third NHL game, and a whirlwind of breathless mythmaking coverage. Did you know it took another young Edmonton Oiler, Wayne Gretzky, THE Wayne Gretzky, 50 games before he scored three times in one? (It’s just too bad Derek Stepan and Fabian Brunnstrom, who each recently recorded hat tricks in their very first NHL games, weren’t Canadian.)

Anyway, Hall or Nugent-Hopkins could have scored the goal — heck, no. 99 could have materialized on the ice and tapped it in himself — and it still wouldn’t have mattered: The Oilers lost to Vancouver 4-3. There will be many more losses where that came from this season, but there will also be many more contributions, both in Edmonton and outside it, from the NHL’s up-and-coming talent.

There’s John Tavares, 2009’s first overall draft pick, scoring a hat trick of his own for the New York Islanders (in a game that they actually won, 4-2 over the Rangers) and adding an assist for good measure just two nights after he put up a two-goal, two-assist performance against the Tampa Bay Lightning for another Islanders win. There’s Gabriel Landeskog, picked second overall (that slouch) behind RNH in this year’s draft by the Colorado Avalanche, amassing two goals and an assist as a crucial part of a team that has gotten off to a strong and surprising 5-1 start. There’s the Flyers’ Sean Couturier, quietly doing something rookies — particularly rookie fowards — are rarely trusted to do: serve on the team’s top penalty kill unit. There’s young Phoenix defenseman Oliver Ekman-Larsson, who has already tripled his goal production from last year, netting three for the Coyotes in one four-game stretch and garnering both praise and affection from his teammates.1

It’s early in the season, and that’s when some young players shine brightest, before the grind of 82 games and the growl of quick-to-adjust veteran opposition take their dulling toll. Still, it’s always exciting anytime the league’s future is out there on the ice right in front of us, fighting amongst itself and jockeying for position, for playing time, for prestige, for points.

On the other hand, as NHL minicontroversies go, none felt more stuck-in-the-mud than the one stemming from a different kind of battle in last Thursday’s Penguins-Capitals game. Far from the above teams relying on — or at least relishing — their new-to-the-league players, Pittsburgh and Washington have for years now been entrenched in a blood feud with some pretty big stakes. So it was no real surprise to see a guy from each team out near center ice going at it with flying fists in the third period of a closely contested and hatred-filled game, even if it was only a week into the season. Nor did it seem too unusual when the victorious of the two couldn’t help celebrating his knockout with a few taunting gestures.

But in this league, with its Byzantine code of acceptable conduct and its ever-quickening undercurrent of brain injury awareness and its unyielding two-party system of Pro-Fight and Pro-Peace, nothing is ever as simple as that. For one thing, the fisticuffs between fearsome Pittsburgh pugilist Arron Asham and scrappy Washington striver Jay Beagle was an absolute mismatch. It was also upsetting to watch: After gamely weathering a few spirited blows from Beagle, Asham TKO’d his opponent, leaving Beagle facedown on the ice with blood pouring from his face. Asham had his back to the carnage and didn’t realize its severity as he pantomimed a “knockout” sign and then a “go to sleep” motion that he later told reporters was “a classless move on my part.”2

His apology didn’t stop an army of anti-fighting activists from taking this as an opportunity to decry the state of violence in the league, as they will have occasion to do many more times over the course of this season. The cycle of discourse is always the same. It’s easy to make the point, and the point is compelling: How come the NHL suspends players for head-targeting hits, but not head-targeting fists? In a league so supposedly concerned with brain injuries, aren’t these battles the first ones that should go? It’s a difficult question, because for one thing, you’d be hard-pressed to find many league general managers or coaches, or even players, who truly wish to eliminate from the game these on-ice battles between two willing participants. Many argue that if the role of enforcer goes away, the number of dangerous cheap shots — high sticks, slew foots, and the like — will flourish. (It’s not unlike leaving those scary-big spiders alone to just do their thing in your yard.) Many hockey players and fans pride themselves on playing and watching a game that considers itself self-policing. But, as is occasionally the case, along with the cops can come the brutality, and round and round we go.

I feel like a kid’s hockey coach making this statement, but two of the best goals of the week were as much a function of great passing as they were of great scoring; there’s a reason assists and goals are each worth the same number of points in hockey. (Also, if we win tonight, I’ll buy everyone pizza!) With the L.A. Kings up 4-0 on the erratic St. Louis Blues on Tuesday night at the Staples Center, Anze Kopitar flipped up a … lob pass? Alley-oop pass?3 … to Simon Gagne, who smoothly accepted it and went in for a low-angle shot past Jaroslav Halak Brian Elliot for an absolute beauty.

Another result of pretty passing came with the score tied at one between the Buffalo Sabres and the Montreal Canadiens. With just 5.9 seconds remaining in the second period, the Habs’ Josh Gorges made a grave error: He iced the puck. The faceoff was brought back into the Sabres’ offensive zone, Buffalo proceeded to put on an absolute clinic in crisp puck movement, and I did a double take to make sure I wasn’t watching some ad for NHL12.4 (Those graphics do look mighty realistic … )

Nope, it was real, and it was spectacular. In just 3.1 seconds’ time so many Sabres got their sticks on the puck en route to goal scorer Thomas Vanek that Paul Gaustad, the man who began the whole speedy sequence with the faceoff win, wouldn’t even be credited with an assist.

This goal probably belongs on the list of the week’s best, but it’s almost more notable on the defensive side for its perfect depiction of this category’s name. Columbus looked like a bunch of traffic cones set out on the ice for a summer-camp stickhandling drill, with Dallas’ Jamie Benn playing the role of the dexterous camper, navigating his way around pretty much the entire Blue Jackets on-ice lineup before, almost as an afterthought, putting it into the back of the net.

It was, in many ways, a sad distillation of the Blue Jackets’ 0-6 showing thus far. The team is particularly hopeless when outnumbering the opposition, having scored only two goals this year on 30 power-play chances. Columbus has been without big offseason acquisition James Wisniewski for all six of its losses, as the defenseman continues to serve out an eight-game suspension levied for a preseason hit on Minnesota’s Cal Clutterbuck. Center Jeff Carter, who was traded from the Philadelphia Flyers, was placed on injured reserve on Monday for a hairline fracture in his right foot and, presumably, a broken spirit. This past weekend, coach Scott Arniel ran his team through a grueling bag skate,5 and writers have reported spotting as many as 27 scouts from around the league lurking during games, an indication that the franchise might be trying to make some moves. Fantasy hockey team owners aren’t the only ones to start considering panic trades this early on in the season, you know?

But Columbus isn’t the only floundering team. On Tuesday night both the Minnesota Wild and the Ottawa Senators ushered sportswriters out of their locker rooms so they could have some alone time following losses.6 Other teams were more open about their misery: “Just embarrassing,” said the Predators’ Jerred Smithson after Nashville fell 3-1 to the Oilers and managed only 12 shots. “We don’t work, we don’t skate, we don’t forecheck, we have a hardworking team that doesn’t work hard and I don’t know, it’s beyond frustrating right now.” Defenseman Shea Weber added: “That was one of the worst losses I’ve ever been a part of.”

Things got a leeeettle bit hectic Tuesday night in the Boston Bruins’ game against the Carolina Hurricanes, as this box score makes clear: 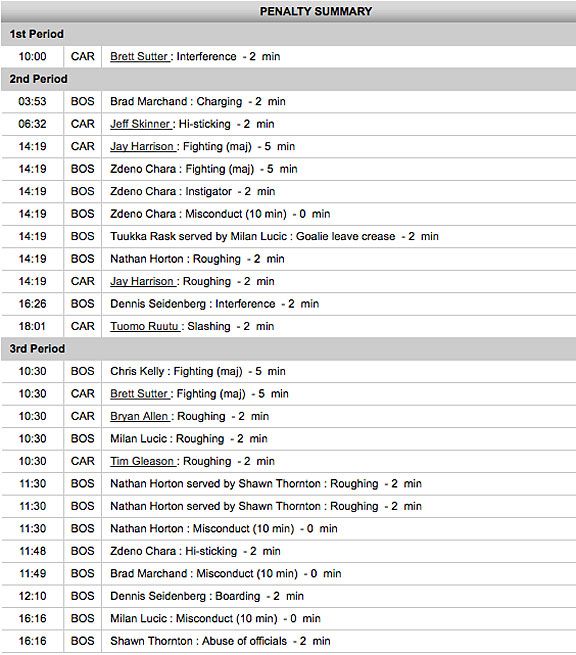 The various meltdowns included, but were not limited to: the Bruins’ penalty box resembling a clown car; Chris Kelly fighting a headless Brett Sutter (I particularly like when he tries to wriggle his dome out of his armhole); Nathan Horton rag-dolling a strategically disinterested Tim Gleason (who later also drew a 10-minute misconduct on Milan Lucic, much to my fantasy PIM delight); Brad Marchand skating to the bench and sitting down without even knowing he’d been thrown out; Bruins coach Claude Julien also getting ejected; and Zdeno Chara getting all up in the face(mask) of Carolina goalie Cam Ward, leading Boston netminder Tuukka Rask to skate over and have a few words with Ward that, sadly for fans of hot goalie-on-goalie action, did not end up producing any romps.

“I’m not gonna waste my time with Tuukka Rask,” Ward later said, though as NESN appropriately points out, he may not be aware of just what Rask is capable of.

Let’s sum up the whole bizarre evening this way: Mad Mike Milbury would have been proud.

“He was out of shape.
He was fat. He’s skinny now.”
— John Tortorella