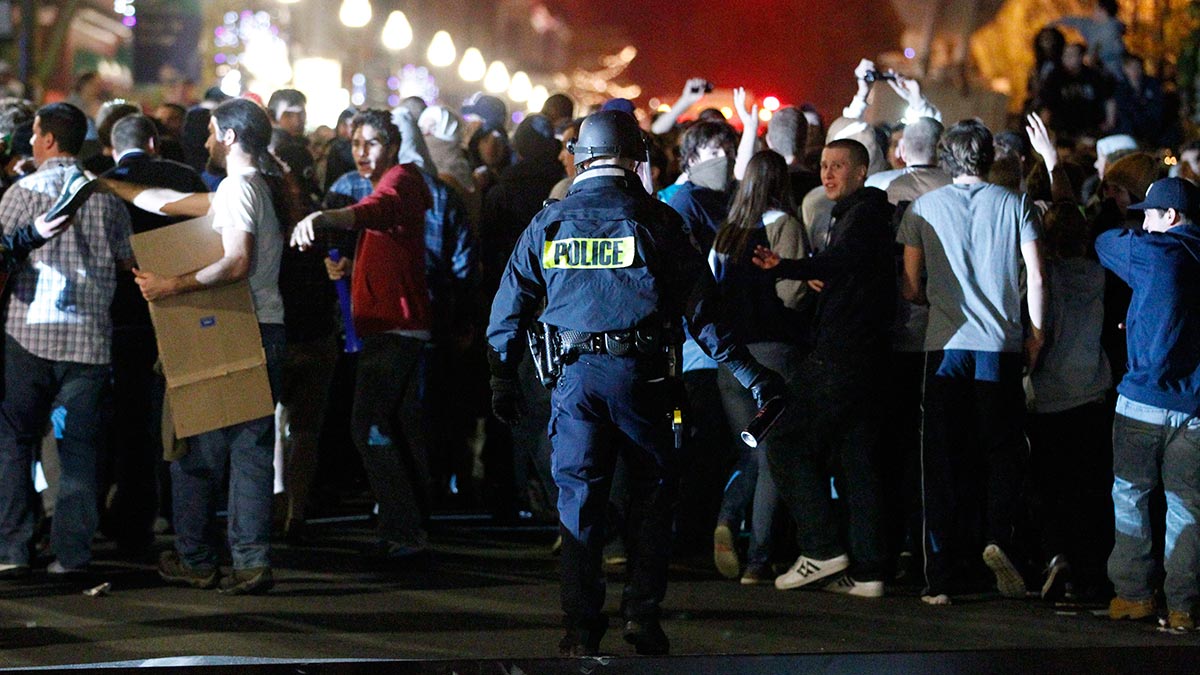 There is a place in my hometown known as Beaver Canyon, a stretch of downtown street bounded on both sides by towering student apartment buildings. In 1998, during an annual summer craft fair and alumni bacchanalia known as Arts Fest, someone hurled a garbage can off a balcony, and then someone else threw one of those party-ball kegs into the road, thereby sparking a riot that provoked the spraying of tear gas and multiple arrests. In a way, what happened on that night in State College was much weirder than what happened last night, because there was no explanation for it at all. But that riot didn’t unfold on Twitter and Facebook and national television, with reporters from every major media outlet in America wandering our streets.

We do this a lot at Penn State, gather in spontaneous groups to celebrate football victories or party weekends or nothing at all, and even when I was involved with it, I couldn’t explain why. Back before they figured out ways to collapse goalposts, we rushed the field to take them down ourselves. In 1990, when Craig Fayak kicked the game-winning field goal, a group of students leapt the fences of Beaver Stadium, tore down the goalposts, and deposited them on the front lawn of Joe Paterno’s house, all of which wouldn’t seem so odd except that the game was played in South Bend, 500 miles away. In 1993, when the Phillies won the National League pennant, we clogged Beaver Canyon, jumped around for a while, and then went home. When bin Laden was killed, thousands of students clogged the streets, chanted “U-S-A!,” and then went away.

Again, I can’t say definitively why we do these things, and I am deeply ashamed by the violence that occurred in the wee hours of Thursday morning, with the world peering in on our town as it never had before. Maybe it’s the omnipresence of alcohol, and maybe it’s a party culture that’s been honed over the course of several decades, and maybe it’s just the sense that we’re young and invulnerable and want to express ourselves in some way on a campus that keeps growing and growing, at a university that’s so unbelievably big that it can easily swallow your identity.

Then again, there are a lot of things about Penn State that I can’t explain today.

I can’t explain why the chain of command at the university failed at its duties, or why Joe Paterno appears to have fallen short of the moral standards he set for this university 44 years ago, when he devised a concept known as the Grand Experiment that would find a way to balance big-time athletics and academics. I can’t explain why a school that taught us all to believe that success and honor were inexorably intertwined could have apparently put its own interests above those of abused children. I can’t explain why it took five days for a sane and reasonable voice of the university — John Surma, vice chairman of the board of trustees, who stoically weathered a nationally televised press conference — to show up and apologize in something more than a published statement.

There are a lot of people who still cannot believe that Joe Paterno would have condoned such actions, and I understand their denial. There are a lot of people who are sad for everything we’ve lost, and I can relate to that, as well. There is universal outrage on behalf of the victims of these crimes, and I share in that outrage above all else. I’ve felt it all over the past few days, and I can’t really argue with anything you might feel, or with the decisions the board made last night. Regardless of how the facts emerge over the next few days and weeks and months and years, there are things about Penn State that need to change, and the only way to do this is by starting over.

My dad has been a chemistry professor at Penn State since 1978. It is a far better academic institution than it was when he first arrived. It is a far better institution than it was when I graduated in the mid-1990s, and, despite everything we’ve learned in the past week, you cannot deny that a great deal of that has to do with Joe Paterno. There are serious students at Penn State, despite what you saw last night, and there is incredible research being done at Penn State, despite its reputation as a fallback party school for kids from Philadelphia and Pittsburgh and all those little towns that dot the Keystone State. Joe Paterno raised millions of dollars for this university; his name is on its library. He is a complicated man who was brought down by what appear to be terrible crimes against the most vulnerable members of our society, victims who are foremost in all our minds this morning, victims whose emotional pain obviously dwarfs any of ours.

A couple of years ago, This American Life aired an incredible episode called “No. 1 Party School,” and it was all about life at Penn State on a typical weekend, and it is sad and infuriating and yet weirdly uplifting in parts, when the alcohol poisoning and the fighting and the rioting falls away and you realize that we did the stupid things we did because we were kids and, at a school with nearly 40,000 students, we just wanted to forge some semblance of a community. And that’s the irony of Joe Paterno building a big-time football program: It brought out the best of us and the worst of us at the same time. I can only hope that what took place last night was the raging against the dying of that light, and that we will reexamine every aspect of the culture we’ve fostered — including these silly Beaver Canyon gatherings — and that someday our community will be whole again.

Last night, I watched the news until 1:30 in the morning, and I cried a little, and then I went to bed. I woke up this morning and my hometown was quiet again. On the front page of my old college newspaper, a senior marketing major named Andrew Hanselman said this: “Being accepted to Penn State felt like a family, and Joe Paterno was the father.”

Well, we’re on our own now, Andrew. It’s time to grow up.