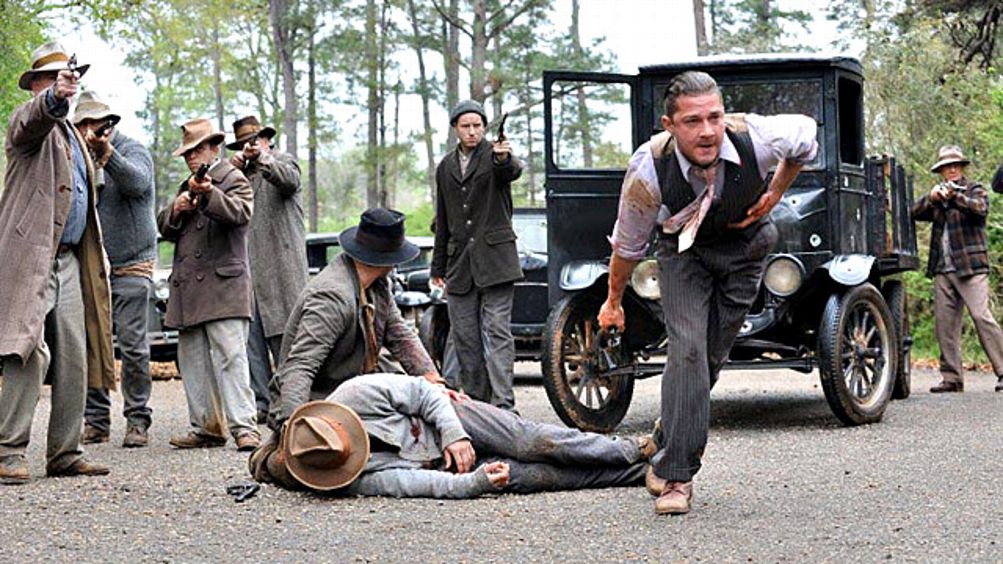 This week brings two significant stories out of an otherwise quiet Hollywood, both signaling the melancholy fact that summer is effectively over. First, 2016: Obama’s America, Dinesh D’Souza’s if Obama isn’t a terrorist, then why is this hundred-dollar bill on fire? “documentary” about the “roots” of our president’s “rage,” made $6.2 million at the weekend box office. That figure was sizable enough to beat all but one of the new releases Hollywood put in theaters: Premium Rush, at $6.3 million, eked out a flat-tire victory, but the industry’s other two contributions to the late-summer slate, Hit & Run and The Apparition, couldn’t even crack $5 million. Consider that for a moment: There was a week in 2012 in which Hollywood was unable to come up with a new entertainment superior to a film in which the director’s rosy belief in the end of all American racism is dramatized as two white actors presenting a black actor with a birthday cake.

Also this week, the Weinstein Company dumped Lawless, John Hillcoat’s imperfect but still pretty amazing bootlegging drama starring Shia LaBeouf, Tom Hardy, and Guy Pearce, on a pre–Labor Day Wednesday. It’s a Bermuda Triangle of a release date, historically a mercy-killing ground between the end of the blockbuster season and the beginning of many an Oscar campaign — in January, Harvey Weinstein optimistically referred to this week as “a great bridge between the summer and the fall,” which is to say it’s not quite either — that also in many ways suits the film. Lawless has guns and big explosions and a quarter of a known action hero in LaBeouf, as blockbusters do. But there are also long, contemplative shots of roosters bumping chests, dust storms overtaking small Virginia towns, and hillbillies sitting mournfully by the road. The film’s violence is not stylized or comic-book-like but bloody and unflinching and hard-R. It has the type of virtuoso ensemble acting you associate with November-December awards-season type of fare — if Tom Hardy were in the film just a bit more he’d deserve an Oscar nomination.1 Watching Lawless, you are keenly aware that summer, from Hollywood’s perspective, is over.

It’s probably about time. Last weekend was the year’s worst, box office-wise. All the big summer questions — about the franchise potential of Jeremy Renner, the bongo proficiency of Matthew McConaughey, and the extraterrestrial origins of mankind — have been answered. The new ones concern things like “Will the hypnotic sound of Philip Seymour Hoffman saying ‘Man … is not … an animal‘ ever leave my head?” and “Is there too much beard in the new poster for Steven Spielberg’s Lincoln?” (The answer to both questions is no.) And it’s frankly nice to end summer on a high note, which is what Lawless is.

Art-school pals Hillcoat and Lawless screenwriter Nick Cave have now made three movies together (the other two being the Australian prison horror Ghosts … of the Civil Dead and the pitiless frontier Western The Proposition, which you should see if you haven’t already), all astonishing in their beauty and brutality. Hillcoat also directed, to slightly less successful effect, the 2009 adaptation of Cormac McCarthy’s The Road, the same year that Cave put his deathless music career on hold to publish his second novel, The Death of Bunny Munro, about a door-to-door salesman with “hymen-popping dimples” and a tragic compulsion to fuck himself into the grave. Both men clearly admire the beauty in blood and the baroque language people once used to describe spilling it.

Lawless is adapted from Matt Bondurant’s fictional recollection of his real-life bootlegging grandfather and granduncles, The Wettest Country in the World, which is also what Lawless was called until Harvey Weinstein decided he liked the name of Terrence Malick’s next movie better. The film is set in 1931 Virginia, where the hills of Franklin County are, as LaBeouf’s character tells us in a jolly parody of an actual rural Virginia accent, lit up with DIY distilleries “like a damn Christmas tree” — Hillcoat’s absurdly good cinematographer, Benoît Delhomme, shows them to us at dusk, the fires from the moonshine stills flickering in the failing light.

Lawless has a lot of this — weeping willows and galloping horses and shy, beautiful women in bright-yellow dresses. All the characters skew toward archetype if not full-on myth: The three Bondurant brothers, played by Hardy, LeBeouf, and Jason Clarke, are independent sorts who believe in brass knuckles and their God-given right to make stump whiskey and sell it to their neighbors; their eventual antagonist, Guy Pearce’s Charlie Rakes, is a special deputy in from Chicago with a bow tie, a visceral loathing for dirt, and two eerily vacant patches of skin where his eyebrows are supposed to be. Gary Oldman plays a manic gangster with a fat tie who comes and goes from the film without reason or explanation. Jessica Chastain, as a big-city dancer on the run, is a flame in a blue-green dress, red fingernails, and a lit cigarette. The vision of her, late in the film, walking quietly through the Bondurant house in the dark without a stitch of clothing on, is more or less why movies deserve to exist.

It’s all gorgeous and vaguely nonsensical and violent as hell: Windpipes are collapsed, throats jaggedly cut and then jaggedly stitched back together, men’s body parts severed and displayed in mason jars. Hardy, as the middle brother who is forced to be the eldest, wears his hat low, speaks wetly around a cigar, and generally puts together one of the more impressive performances of the year, often by doing no more than grunting or issuing calm, sleepy threats: “You send your kind with the bow tie round here again … ”

I’m not saying LaBeouf’s method as an actor is to take a potent cocktail of cocaine and methamphetamines and start screaming at his director to roll film; I’m just saying I can’t think of another explanation for why his performances are so loud and twitchy and irritating.

The movie has its flaws. Shia LaBeouf may be on his way to being one of the great performance artists of our time, and I admire his willingness to heedlessly insult the powerful men who write him checks, but he has no business acting in the same movie as Chastain, Pearce, Oldman, and in particular Hardy, the back of whose neck, as one critic has already memorably written, is a better performer than this kid. I’m not saying LaBeouf’s method as an actor is to take a potent cocktail of cocaine and methamphetamines and start screaming at his director to roll film; I’m just saying I can’t think of another explanation for why his performances from movie to movie are identically loud and twitchy and irritating.

Still, like Harvey said, Lawless makes a pretty great bridge from summer to the next thing. Even the way Hillcoat tells stories — calm, picturesque naturalism interrupted, from time to time, by bouts of hysterical violence — feels apt here. We are, calendar-wise, heading back into the quiet for a moment, free for a spell from the neck-snapping noise of summer. To be honest, I already sort of miss it.

This week’s column marks the end of Summermetrics (though not of Grantland’s weekly movie coverage), which puts us in the position of looking for a grace note when there probably isn’t one. Mark Harris’s Oscarmetrics had real stakes and a tangible outcome (14-for-24, to be exact; we love you anyway, Mark!). Summer movies, a tangle of sequels and reboots and thinly veiled advertisements for Coors Light, don’t lend themselves to the same kind of tidy wrap-up — they never really even end, as demonstrated by the September, October, and November release dates for Resident Evil: Retribution, Taken 2, Skyfall, and The Twilight Saga: Breaking Dawn — Part 2.

Still, though ticket sales this summer were down — Jeremy Renner, you are no Ryan Lochte — from this vantage point the season went about as well as it could have. Audiences rightly punished Dark Shadows and Battleship and Abraham Lincoln: Vampire Hunter — movies that wore their grasping cynicism more or less where Bane wears his mask — and rewarded, sometimes in record numbers, the big-shot pop-auteur directors who parachuted into summer to grace us with The Avengers, Prometheus, and The Dark Knight Rises, among other absurdly expensive and effective spectacles. Plus Magic Mike happened, and who could be mad at that?

If there is a conclusion to be drawn, looking back on this blockbuster season, it’s the happy fact that the machines will not be taking over anytime soon. Hollywood does its absolute best to avoid counting on execution — hence the annual summer slate of sequels, reboots, remakes, and films based on board games; the industry will try anything short of actually relying on the humans it employs to do their jobs well. But execution was the story of the 2012 summer. Steven Soderbergh, Joss Whedon, Ridley Scott, Wes Anderson, Oliver Stone, and Christopher Nolan all made ambitious films that succeeded because of, rather than in spite of, the fact that they were deeply idiosyncratic. Channing Tatum, Matthew McConaughey, Kristen Stewart, Emma Stone, and even Tom Cruise all managed performances that transcended — at times even saved — the films they were in. Thoughtless, rote remakes like Total Recall were duly disdained by audiences who knew they were owed better; cynical campaigns to crown new stars failed before the indifference of theatergoers who could distinguish between, say, Matt Damon and the other, less charismatic guy they brought in to replace him. Lawless — a movie directed by a distinctly auteurist guy and made great by his wildly gifted cast — is as good a film as any to drive this point home one more time before Labor Day.

Ahead of us remain movies by Paul Thomas Anderson, Quentin Tarantino, Kathryn Bigelow, Peter Jackson, Ben Affleck, Steven Spielberg, and Terrence Malick, to name just a few of the talented people yet to work this year. We may be done with blockbuster films for the time being, but we’re just getting started with the men and women who can really execute. And so, by way of (a temporary) farewell, our most sincere apologies to Taylor Kitsch and Ryan Reynolds for all those unkind jokes, and to Kristen Stewart, whom we continue to adore and had no intention of hexing with that adulatory column. Which for the record we still stand by, every enchanted word. See you all in the fall.