Trailers of the Week: Gangster Squad, Cosmopolis, Sleepwalk With Me and More

Silver: I make no secret of my steadfast and wholehearted love for Sam Raimi. I’ll get his back when needed (“Spider-Man 3 was not his fault. It’s one of the clearest examples of studio meddling”), apologize for him (“But you have to admit the baseball scenes in For the Love of the Game were pretty great. You could totally tell he was a real baseball fan”), justify his shortcomings (“The Quick and the Dead is underrated. And just look at that cast — Stone, DiCaprio, Crowe, Sinise, and Hackman — the guy’s got an eye for casting”), and fully embrace his flaws (“Yeah, I just bought a bootleg copy of Crimewave on eBay. That movie rocks!”). So I’ll be the first to admit that I’m probably not going to be able to provide the most unbiased critique of his latest film, Oz: The Great and Powerful.

I’d probably shy away from mentioning how the film’s supposed magical land of Oz looks more like CGI castoffs from Alice in Wonderland (better known as Tim Burton’s official plunge into insipid, uninspired paycheck filmmaking), and choose to focus on how Raimi has a true respect for classic cinema, and how a guy like him will put all his love and creativity into honoring the great legacy of Oz (this includes the eerie 1985 Fairuza Balk film Return to Oz. Those Wheelers still creep me out), even going so far as to shooting the Kansas overture of his film in the traditional 4:3 black-and-white.

Alas, this is just a teaser, and aside from the revelation of a few plot snippets, there’s not much here to judge the final film on, but I’m obviously going to be giving Mr. Raimi the benefit of the doubt. Besides, even before I saw this trailer, the cast and the fact that he’s reuniting with composer Danny Elfman had me sold.

Browne: Is it bad that when I saw this title, my first thought was: 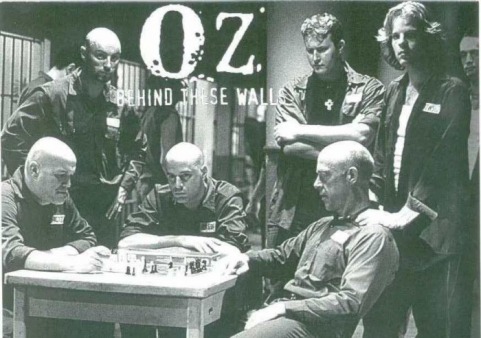 And my second was:

I’m really glad a film starring James Franco has nothing to do with either of these two.

Browne: I feel that with every additional trailer they release, my desire to see Gangster Squad is going to increase, especially if they keep releasing trailers that are essentially the same as the previous. Silver, isn’t it pretty much the same?

Silver: Yeah, not much new in this trailer, but I’m now certain that a combination of Tom Hardy, Gary Oldman, and Guy Pearce can overrule my aversion to Shia LaBeouf. And even with Mutt Williams (a.k.a Indy Jr., a.k.a. Shia) in it, I’d still choose Lawless over Gangster Squad.

Silver: There is certainly nothing new in this trailer, and I’m more than certain that the alluring combination of Sean Penn, Josh Brolin, Ryan Gosling, Emma Stone, Anthony Mackie, Robert Patrick, and Michael Peña can in no way overrule my disdain for what looks like a retread of every period crime film made in the last 30 years. I’m half expecting Russell Crowe, Kevin Spacey, and Guy Pearce to pop up on the steps of Griffith Observatory and have a shootout with Kevin Costner, Andy Garcia, and Sean Connery. Federal agents from Chicago in town to pursue Robert De Niro, who’s hunting down Sean Penn for stealing his Al Capone performance.

Browne: So it looks like we have opposite feelings about these two films. Do I think it’ll be a classic? No, but it has guilty pleasure written all over it. I think it’s going to land in the same mental category as Public Enemies for me, in the sense that it could have been so much better, but I could still watch it over and over again. Also Emma and Gosling, how does one pretend to not love that? Seriously, I’m asking you a question.

Silver: Crime. It’s one of the easiest topics to cover in film, because right vs. wrong and good vs. evil are so quickly established. The better crime films find a way to blur these delineations, and make antiheroes out of everyone. For my money, no one does this better than the Brits. I’d even go so far as to say that “British crime films” is its own genre. When they’re at their best, I’ve yet to see crime films from other countries that are as clever, narratively tight, and rich with fully fleshed out characters. Based on the trailer, Comes a Bright Day looks to follow in the footsteps started with 1951’s The Lavender Hill Mob. It’s got a Croupier and I’ll Sleep When I’m Dead feel to it. And it’s always good to see Craig Roberts, who was so good in 2010’s Submarine. Really looking forward to this film.

Silver: Yup. This is absolutely everything I want from a David Cronenberg movie — sex, violence, depravity, deception, and erudite and conjectural musings about our current and future lot in life. And I look forward to seeing what all the Robert Pattinson hype is about. I haven’t seen him onscreen since Lord Voldemort killed him in Harry Potter and the Goblet of Fire.

Browne: While I’m into the opulent and luxurious and violent aspects of this film, I just kind of wish Pattinson wasn’t the lead. With that said, it could have been Shia LaBeouf, so, as usual, beggars can’t be choosers.

Silver: I’m really not sure how I feel about this film. Swap out the “Goat Man” character for a wise geriatric next-door neighbor and I feel like I’d seen this film before. That said, I’d like to believe that offscreen David Duchovny is exactly like the scraggly, carefree, yet loquacious, endearing guy we see in the Goats trailer, and that the only reason he took the role was so he didn’t have to clean up and could wear his own clothes.

Browne: I really want to see this and I don’t know why. Yes, some of my favorite people are in it (Farmiga, Duchovny, Burrell), but I’m weirdly most invested by the main character. They took the classic divorced parents/split custody tale and took it about 29 steps to the weird end of the spectrum. I’m into it.

Sleepwalk With Me (August 24)

Silver: Comedian Mike Birbiglia is the real-life Tracy Jordan. Let me explain. Sleepwalk With Me is a film based on the book, Off Broadway play, and live album of the same name. So as long as he can translate the content into a TV show, he can complete his (fictional … because this is pure conjecture) quest for the E.G.O.T. (Emmy, Grammy, Oscar, Tony).

Snide comments aside, I’ve listened to the live album, and this film looks every bit as charming and unique. Birbiglia’s droopy puppy-dog eyes and kindly demeanor make him a perfect prism through which to tell this modern-day story of human connection. And I, for one, am very pleased to see Lauren Ambrose, whom I don’t recall seeing much of since she drove off at the end of Six Feet Under. She’s been missed.

Browne: Few name drops within a movie trailer have ever sold me on a film like the one halfway through Sleepwalk With Me:

This is how you get me to go see a film. IN THEATERS.

Silver: Here are the thoughts that passed through my head as I viewed this trailer.

1. “Can’t wait to see Indy on Blu-ray, even if I have to purchase these films for a third time on DVD (fifth time if you count the two rounds of VHS purchases).”

3. I still have a huge crush on Karen Allen. When she puts her hands on her hips and gives Indy shit, I just melt. I love you, Marion.