How Do NFL Linemen Drop the Weight?

Moneyball and the Houston Rockets 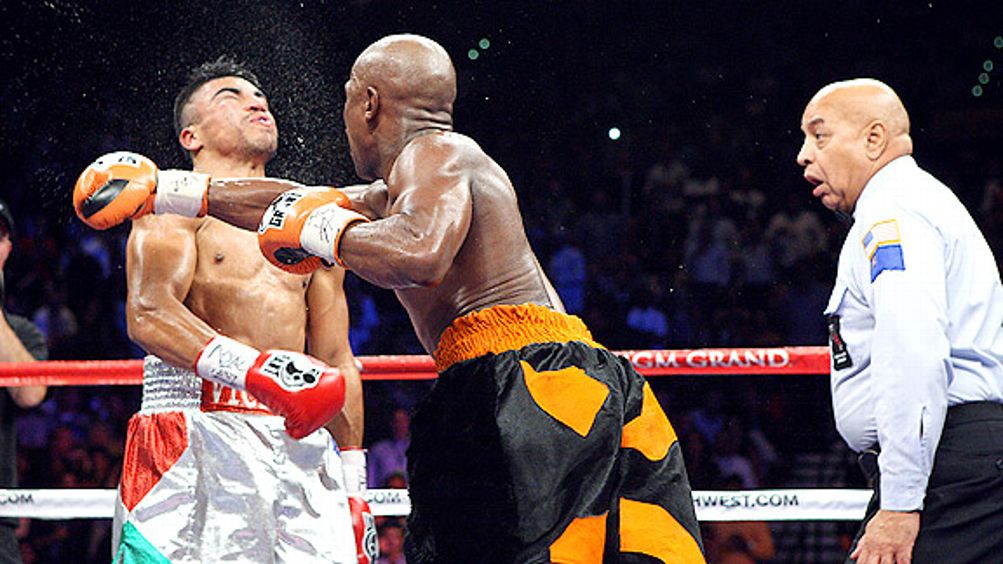 Given how things were going — and they were going badly — the sucker punch that ended Saturday’s fight was the best thing that could have happened to Victor Ortiz. It came before the evidence of Floyd Mayweather’s precision right hand could build up on Ortiz’s face, before a landslide decision or knockout could confirm what was becoming obvious: Victor Ortiz is a nice story and a power-puncher capable of creating thrilling fights when he’s paired up against live wires like Andre Berto or Marcos Maidana, but he will never be in the same class (or even one class below) as Mayweather and Manny Pacquiao. But because Saturday’s fight ended so strangely, Ortiz not only gets to pound his chest and scream about getting another shot, he also gets spared of the spectacle of his own humiliation.

In the weeks leading up to the fight, much was made of Floyd’s lack of power, his fragile hands, and the fact that he doesn’t throw combinations anymore. Not enough has been made of how quickly and ruthlessly Floyd destroys the psyches of his opponents, how his flawless defense and theatrics can turn a normally level-headed opponent into a spitting, lunging mess. Victor Ortiz did not lose his mind in the ring because of some deep-seated family problems or because of steroids or because he is “psychotic.” Victor Ortiz lost his mind because Floyd was beating a big bass drum in his head.

Ricky Hatton was never the same after his 10 rounds with Money May. The sucker punch saved Ortiz from a similar fate.

Conversely, the sucker punch and the postfight histrionics poured gasoline on the weird, delicate balance Floyd has struck with the public. Yes, the punch was legal. And yes, as Michael Rosenthal wrote in The Ring on Sunday, Ortiz’s Blanka-styled head-butt was what opened the door for the surreality that followed. But none of that matters to anyone outside of the fight media. And although such discussions are interesting, Floyd has long since passed the point in his career where we should be attaching his name to something like this.

The only person who cares, really, is Floyd. And he cares because through force of will, or, perhaps, self-delusion, he believes that numbers and rules are what drive boxing lore. In some ways, this makes sense: The technical master who stakes his claim on an unbeaten record is also the fighter who would risk his legacy to add one more tick to the win column. The flawless record is preserved for now (and nobody can take that away from you!).

Boxing is the one sport in which a win is not always a win and a gutty loss can launch a career (or any number of boxing movies: human, robot, or otherwise). Because so much of fight history is processed and then digested through literature, film, and the old, sentimental writers who cover the sweet science, a fighter’s worth is gauged on a scale of intangibles, each of which has been tacked onto a past great. These storylines don’t have to be true or even very compelling, but they have to be grounded in sportsmanship and moments of courage. For example, if you go by HBO’s storyline, Manny Pacquiao is great because he “fought everyone,” just like Henry Armstrong, who also “fought everyone.” Manny’s place within the pantheon of great fighters was earned not on the totality of his record, but through the abstraction and the resulting favorable comparison to legend.1

One moment of humiliation can smudge an otherwise brilliant career in the ring. Roberto Duran, one of the 25 greatest boxers of all time, has become a two-word catchphrase. When Oscar De La Hoya’s revelations about substance abuse and suicidal ideations caused him to resurface in the news a few weeks ago, the conversation went straight to the late rounds of his fight against Felix Trinidad. It’s a brutal and contradictory truth about boxing: Nobody cares what a fighter does in his personal life. He could be accused of rape, murder, drug dealing, or whatever else, but as long as he acquits himself with brilliant violence in the ring, fans will forgive him of pretty much anything. But if the transgression occurs inside the ropes, the judgment is swift and it is final. It’s still too early to know where Floyd’s sucker punch will rank in the litany of bad boxing moments, but it’s already clear that his canonization will have to wait until memories grow fuzzy and his beloved zero begins to exist outside of its proper context. Again, there was nothing wrong with how Floyd chose to end the fight — when your opponent loses his mind and tries to ram his Mohawk through your face, you certainly have earned the right to drop him with a sucker punch. But what was diminished was the champ who fought Shane Mosely — in the second round of that fight, Floyd took perhaps the hardest shot of his career, and, after barely holding on, he came back and put on a marvelous display of technical boxing. That was the Floyd who Floyd wants us to celebrate — untouchable, perfect, and honed from a lifetime of hard work and dedication.

What’s more tragic is that before all hell broke loose, Mayweather was fighting even better than he had against Mosely. At the end of the third round and the start of the fourth, he tattooed Ortiz with right-hand leads and left hooks. By the middle of the fourth round, Ortiz-Mayweather was starting to look like Hatton-Mayweather — the stronger fighter who had been trying to assert his will was becoming frustrated, tired, and confused. At that point, the outcome felt inevitable. Ortiz, who was already starting to back up, would be picked apart and either get dropped in a later round — a knockout by way of frustration — or he would rally and lose a unanimous decision. But barring a miraculous knockout punch, Ortiz wasn’t going to win another round in that fight.

What Floyd lost was the begrudging respect of those who hate his flamboyance, his defensive style, and his refusal to make what would be one of the biggest fights in the history of the sport. Until Saturday night, the haters had to shut up when the opening bell rang. Now they have ammunition. And just as the zero will take on different meanings as time progresses, the sucker punch will take on its own self-propagating significance. And in that way, it doesn’t matter if it was actually a sucker punch or if it wasn’t a sucker punch or who earned the right to do what and why.

Jay Caspian Kang is an editor at Grantland. His debut novel, The Dead Do Not Improve will be published by Hogarth/Random House in Summer 2012. Follow him on twitter at @jaycaspiankang.