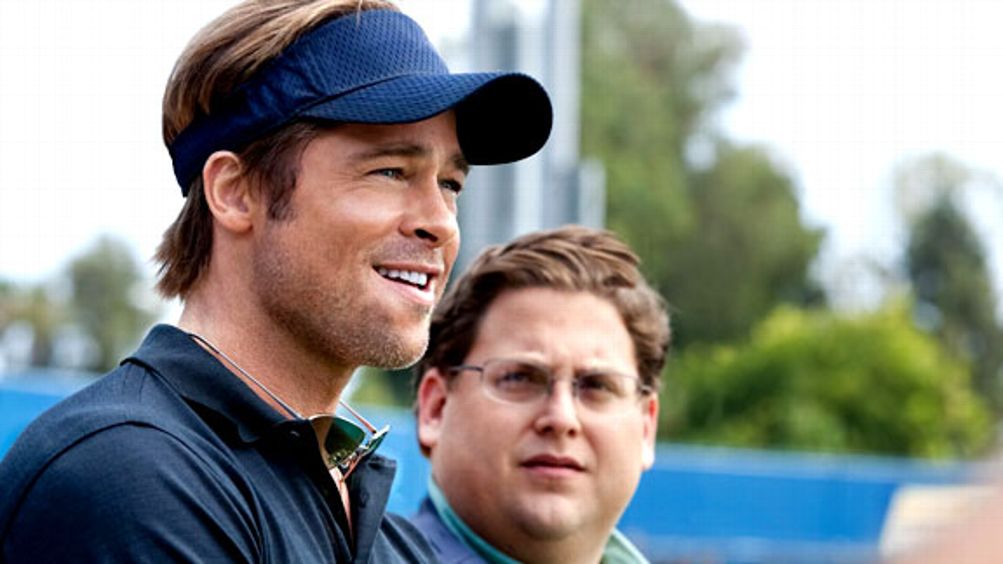 This Friday marks the opening of the movie Moneyball, the on again, off again production of the best-selling book by Michael Lewis. Although we’ve poured the better parts of our lives into the sort of work1 that will appear on the silver screen, we dread it.

We know the storyline well and the original characters from the book. The worry is that the movie will be the touchstone for so many people that it will color their image of what a sports franchise is like that marries the objective analysis with subjective (and valuable) insights. We debated just how much the reach Moneyball the movie would dwarf the reach of the book2 , but settled on this as indicative: Our own parents — with plenty of incentive to have an interest in the subject — were likely 0-for-4 on having read the book, but likely 4-for-4 on the upcoming movie. Eeeh.

Admittedly, neither of us has seen the movie yet. But the trailer alone pushes a typically divisive storyline of us versus them. New versus old. Or worse, some insinuation of smart versus not. We hate that. It doesn’t have to be that way, and it’s not that way in Houston.

Our scouting staff3 in Houston works incredibly hard scouring the globe for talent. Everyone is constantly on the lookout for differential information that might yield additional predictive power to our player evaluations. No doubt, predictive power is what we’re all after. And data helps. But information with real power comes in a variety of forms: both in the stereotypical form that the movie will surely play up of databases and spreadsheets and analysts and predictive models, but also in the form of expertise and experience acquired only via a lifetime of playing and coaching the game. The best organizations4 bring that all together.

The other reason for dread is that (strangely) a 2011 movie released about an A’s team from a decade ago will still seem new to some moviegoers. And newness will conjure up trepidation all over again. The A’s success since then will be the first place the pundits look for a referendum on this type of thinking, as if that’s the only club that has been infiltrated by objective analysis. Using only the A’s as the reference point for the utility of the ideas presented in Moneyball is like concluding the bow and arrow doesn’t work because Wile E. Coyote tried it once to catch the Road Runner5 .

The examples of successful clubs that have found an added edge in data are myriad, from the sustained excellence of the Patriots, Red Sox, or Eagles to the improbable repeat Cinderellas like the Tampa Bay Rays or the Butler Bulldogs. In truth, sports are actually late to this party of using objective analysis, and it’s only those of us who devote too many of our hours to ESPN who were ever surprised by the changes that eventually found their way to team sports. From wildcatters to winemakers, Wall Street investing to brand marketing, decisions once entrusted entirely to Don Draper are now made by today’s leaders who decide only after poring over real-time metrics, leaning on statistical analysis, and soliciting the advice of veteran experts.

This is true for consumers, too. If you’ve given money in the already hot 2012 presidential race, checking the prediction market www.intrade.com might change your mood. If you were in North Carolina’s Outer Banks before Hurricane Irene, this image6 of where the nebulous “forecast models” said the storm was likely headed might have tested your disbelief in the power of data.7

And more change is coming. The next wave will hit the previously beyond-reproach milieu of teaching8 and the most venerable of professions — your family doctor. In his commencement address at Harvard Medical School9 , Dr. Atul Gawande practically begged tomorrow’s doctors to let go of the notion that they can handle everything (like cowboys) and instead serve on a tightly coordinated team of health professionals that each performs the specialized tasks they are best trained for (like pit crews). Twenty-five miles south on a Foxborough practice field Bill Belichick, in no position to beg, would instead exhort the same message to his tightly coordinated team: “Do your job.”

In reality, the referendum on whether using objective analysis improves decision-making is long over. Industries can remain insulated for a time, but the advantage of augmenting decision-making with data is such that adoption becomes near ubiquitous over time. For example, in baseball, what started as a small movement with the Oakland A’s has become routine with all 30 teams using analysis to one degree or another. While the storytelling genius of Michael Lewis turned baseball’s adoption of analytics into a fascinating yarn, the phenomenon is actually just the mundane manifestation of the march of progress.

Daryl Morey is the general manager of the Houston Rockets, and Sam Hinkie is the executive vice president of basketball operations. Follow Daryl on Twitter at @dmorey.