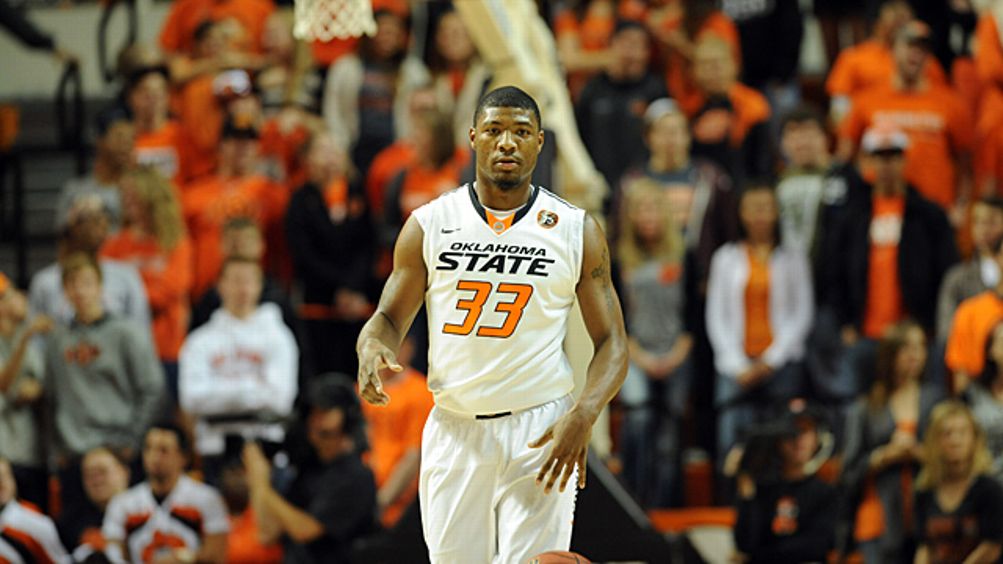 He wanted to have a childhood, he said. He was 19 and maybe he deserved one. The first time through, he’d been too angry, too scared, too hurt; it was something else, not childhood. He grew up in South Dallas, in a neighborhood he called a war zone, where he’d been shot at before he turned 13. He watched one brother die from cancer and another almost die from cocaine. He got in fights where he was so overcome with rage that he’d smash the other kid’s head against the pavement. He felt like he had a broken arm inside him. There were nights when he thought he might kill someone. There were nights when he thought he would die.

Now, on the cusp of adulthood, he’d finally found a place where he could be a kid. So on April 17, less than a month after his 5th-seeded Cowboys lost to Oregon in the first round of the NCAA men’s basketball tournament, Marcus Smart announced that he’d be returning for his sophomore season at Oklahoma State.1 The news sent little lightning-jabs of shock flying around basketball. Smart, the Cowboys’ leading scorer and the Big 12 Player of the Year, was a consensus top-three pick on pundits’ NBA draft boards, partly because the 2013 class was seen as weak. But by 2014, a stocked pack of ultra-freshmen — Andrew Wiggins, Jabari Parker, et al. — would have come howling in, and OSU’s star point guard couldn’t even be sure of a spot in the top 10. Staying in school would therefore be likely to cost him millions of dollars twice: once when he forfeited the salary he might have made right away, and again when a lower draft slot led to a smaller rookie contract the next year.

Elite-level basketball is a business. We’re used to evaluating every outcome in terms of what is gained and lost. So it’s no surprise that Smart’s decision immediately cast his sophomore season in a completely different context from the one he’d enjoyed as a freshman. In the NCAA’s one-and-done era, there’s something suspicious about sophomores anyway. Freshmen are the comets of talent; juniors and seniors are program loyalists or veteran leaders or guys trying to wring the last decimal-gasps out of their potential in the hope of grazing The Show. Sophomores? They’re just freshmen who didn’t, sad elves who never caught a ticket to the Grey Havens.

To a big segment of the media and of basketball fans, everything Smart does in 2013-14 will be haunted by the NBA might-have-been. Was he named Big 12 Preseason Player of the Year? Great; he could have been playing in Orlando. Did he score a stunning 39 points in a win over 11th-ranked Memphis? Might have caught that game on the radio in his Bentley. Add in the low hum of worry about injury — what if he blows out a knee, what if his career ends in Stillwater — and the angelic chorus of hype above the current freshman class, and you start to get a sense of what a strange figure he cuts in this year’s NCAA. He’s a thrilling basketball player who somehow reads as more disappointing the more exciting he becomes. He’s succeeded his way into something that looks, from the outside, kind of like failure.

I‘m not just making that up; people say this stuff. We occupy a sports-media culture in which it’s seen as pretty normal for adults in their forties and fifties to stage loud Lincoln-Douglas debates on the personal choices of teenagers. First Take did more than eight minutes on Smart’s decision to come back. “NOT a Smart Move,” thundered a concerned Skip Bayless. Sports arguments are like very fast chess matches in which each piece that is removed represents a little bit of nuance. After a few moves there’s not a lot of subtlety left. It’s not that Smart doesn’t have defenders; there are still plenty of college basketball fans ready to cheer going back to school on principle; there’s also Stephen A. Smith, who’s just glad that Smart is getting laid. But the debate itself acts as a mechanism to eliminate gradation and complexity. A quick-read cultural logic takes over. The messy human stuff that actually animates a decision like Smart’s gets overwritten by positions that are easy to define and repeat. He “left money on the table.” He “values the college experience.” The subtext of a lot of sports arguments is that guys want rules for how they’re supposed to live in the universe.

Which, fine. We all need some! And the question that seems to glide along in Smart’s shadow — what matters more, financial security or living an authentic life? — is more or less universal. Sports debate is bombastic and silly and there’s something weird about watching middle-aged adults strike cartoon–kung fu intellectual poses. But it can create these little reference points for conflicts a lot of people go through, and that’s something, I guess.

Still, what’s particularly strange about seeing all this play out in Smart’s case is … have you ever listened to Marcus Smart talk? It’s illuminating. Here’s something Jay Bilas said about him not long ago:

Watched film with OSU’s Marcus Smart today. Everything said about his maturity is right. He’s 19 years old, and I was asking him for advice.

And here’s something Smart has said about his own outlook on life:

When you go through things like I have, there’s only one way for you to be. Life is not a game. This is a cold world out there — the world is very cold — and if you don’t learn things and understand things, this world can eat you up.

And yes, the college basketball player who is wise beyond his years is a cliché right out of the embrace-debate pattern book, and yes, Smart’s humility is periodically trotted out by some shouty expert as a pretext to castigate “the me-first generation,” or whatever they’re calling the kids and their Twitter these days. Personally, I like the me-first generation fine; basketball is entertainment, not a quilting bee. But Smart is — well, I’ve listened to a few hundred minutes of him talking and watched him play in a bunch of basketball games, and all I can say is that I find him incredibly compelling. After the fights got out of hand, back when he was a kid, his parents moved him out of South Dallas and he got into anger-management classes, and I don’t know where along the way it happened, but he emerged with this quality of intense serenity. It’s the most surprising thing. I’m not sure I’ve ever seen anything like it in sports.

I’ll try to explain. First, think about the way he plays basketball; flash back to, say, February 2, 2013 — the night last season when Oklahoma State beat Kansas at Allen Fieldhouse for the first time since 1989. Smart scored nine points in the last two minutes and 19 seconds, on top of … actually, let’s just look at Oklahoma State’s side of the play-by-play from 2:19 to 1:01 remaining in the second half, starting with OSU up, 69-68:

Again, this is a freshman, late in a close game, on the road in one of the toughest arenas in the NCAA. Kansas was ranked second in the country; Oklahoma State hadn’t beaten a top-five opponent on the road since 1958. The Cowboys had bled away a 14-point first-half lead, briefly fallen behind in the second, and looked just about certain to lose down the stretch. And then Smart — who hadn’t even had a great game, really — just started emanating this vibe of, like, No. And he did all that. And then with four seconds left, Jayhawks in possession and trailing by three, he took the ball away from Kansas’s Elijah Johnson and slipped it to Phil Forte2 for the layup that sealed the game.

I’m not saying that Smart is A WINNER, in the cryptozoological, Favreian sense; sometimes he loses. I’m saying that, watching him, you get the sense of someone who is perfectly graceful under pressure. That for once that phrase seems to mean something. That you seem to be watching someone who isn’t fazed by stress or chaos blooming all around him. He’ll sometimes make mistakes, because he’s 19 and not Michael Jordan and his offense isn’t as consistent as his defense, but he doesn’t make many of them, and as far as I can tell he doesn’t make them out of awe.

In interviews, he seldom comes out with anything interesting. He’s one of those athletes who says all the right stuff, and because he says all the right stuff, he tends to be fed right-stuff-leading questions. It’s not hard (or maybe it is) to sound mature fielding conversational pop flys like “How do you stay humble?” and “When you win an award like this, do you feel more proud individually or for your teammates?” He answers with platitudes, mostly, like most athletes.

But it’s how he answers. There’s this strange tonal depth. Platitudes are annoying because they represent empty wisdom, wisdom the speaker does not possess but simply imitates. With Smart, it’s as if the moral background of the platitude is entirely filled in — as if he’s done the thinking necessary to, say, prioritize the team over himself, as if he understands what he’s saying, and what he’s saying has three-dimensional meaning for him. Life is not a game. My mom is my hero. I’m grateful for my teammates. I try to learn things and understand things. I want to relive the childhood I never got to have.

In other words, he conveys a fairly remarkable sense of developed selfhood. He seems purposeful about his own inner life. That’s a rare quality, in sports or anywhere else. And I realize that this is a vague thing to attribute to someone, but here’s the point: Watch Smart for a while and then flip over to the sports shouters debating him. Who seems more adult?3 Whom would you rather trust with a tough decision? Believe me, this won’t be a tough call. Compared to some of his critics, Smart might as well be Marcus Aurelius.

So, the assumption that Smart has to win the Wooden Award or outplay Wiggins or lead Oklahoma State to a national championship to validate his decision to come back is flawed. He doesn’t have to do anything to validate his decision to come back. Oklahoma State is undefeated heading into its game against Purdue on Thursday; the team is currently no. 1 in Ken Pomeroy’s basketball rankings, and Smart is coming off a 25-point game against South Florida during which he hit a three-quarter-court buzzer-beater before halftime. But even that’s not really the point. He made a choice for himself, one that fell outside the collective consensus-logic of the sports-culture machinery. It’s a good choice if he thinks it is, because he’s living his own life. Isn’t that how we’re all supposed to live?

I’d like to think Smart’s independence, and not the chattering about his NBA stock, could become the defining characteristic of his season. But the world is very cold.