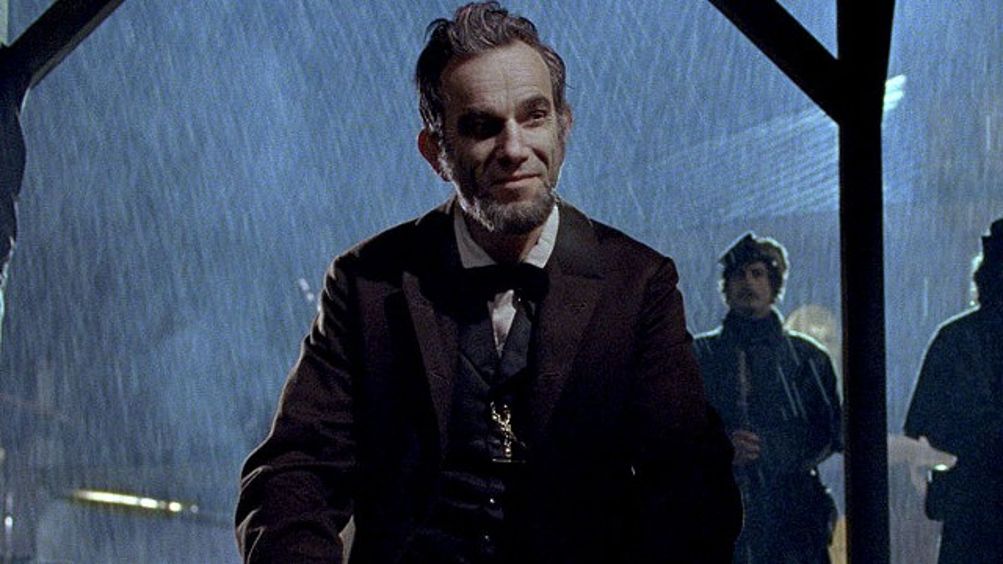 Like writing history with lightning.” This was supposedly Woodrow Wilson’s reaction to D.W. Griffith’s Birth of a Nation, shortly after it became the first film ever to be screened at the White House — right away Wilson recognized film’s power to shape and reshape our understanding of the past. Did he know that one day Hollywood would use that power to suggest, as it did earlier this year with Abraham Lincoln: Vampire Hunter, that slavery and the Civil War were nothing more than the product of a vampire conspiracy? Did Wilson suspect that in 1988, our nation would be asked to believe in a portrayal of America’s greatest president by Sam Waterston, sporting bushy sideburns in a made-for-TV movie based on a novel by Gore Vidal?

Let us hope he did not.

Steven Spielberg’s Lincoln, starring a gaunt Daniel Day-Lewis, is the medium’s newest attempt to get this particular life down in light. But even back in 1915 the history we were writing onscreen about our country and ourselves had a lot to do with Lincoln. Birth of a Nation was the first of two films in which Griffith would show Lincoln’s assassination — the second, 1930’s Abraham Lincoln, came 15 years later. In that film, Walter Huston played Lincoln as a rail-splitting, drinking-beer-straight-from-the-beer-barrel pillar of mournful rectitude. After Huston, our 16th president would be played by a doe-eyed Henry Fonda (in John Ford’s Young Mr. Lincoln), a Harry Dean Stanton–esque Raymond Massey (in John Cromwell’s Abe Lincoln in Illinois), Gregory Peck (in the TV series The Blue and the Gray), and Waterston (Gore Vidal’s Lincoln), among many others — including Bugs Bunny. As with the Western or the war movie, early films about Lincoln tended to be adulatory and reflexively patriotic, and over time became more complex and skeptical — Vidal’s big idea about Lincoln, for instance, was that he was so jealous of the Founding Fathers that he started a nation-rending war to ensure his legacy would rank with theirs.

Superhero movies are where most of our national mythmaking is done now, so it made dispiriting sense when Fox bought the rights to Abraham Lincoln: Vampire Hunter. Directed by the psychedelic Russian-Kazakh Timur Bekmambetov, the film depicted a cheerful Lincoln for whom ending slavery wasn’t enough. In the 2012 movie theater, heroism is defined as leaping across a stampede of wild horses in order to plant a silver-coated ax blade into the head of a vampire, and so that’s what Benjamin Walker’s Lincoln does. Evil can’t simply be an economy based on the involuntary labor of others; but if the Confederate Army happened to be made up of fanged supersoldiers who could only be defeated by silver bullets transported via Underground Railroad, well …

In this context, it feels almost perverse that Spielberg, Day-Lewis, and screenwriter Tony Kushner have made Lincoln, a bluntly serious movie about the highly technical making of a piece of legislation. The film spans a little more than three short months, from January 1865 to Lincoln’s assassination in April of that same year, and is less about the man than his careful shaping and passing of the Thirteenth Amendment, which legally abolished slavery in the last days of the Civil War. It’s Spielberg doing Sorkin, basically, without the ping-pong dialogue and workplace romances — the director’s vision is solemn, even a bit drab, and unrelenting in the service of demonstrating How Things Work in the bewigged political thickets of our government. The allegory is clear — with different costumes, this could be a movie about the passing of Obama’s health care law — as is the filmmakers’ challenge to our expectations of an easy or neat narrative. Lincoln is a movie that requires work. It’s dense and sprawling and unsplashy. But it’s also as ambitious an attempt at American mythmaking as any in recent memory.

Spielberg has attempted this before, trying to give cinematic shape to world history. Not just with Schindler’s List but also Munich and Amistad — all based on real events — and, to a lesser extent, with Saving Private Ryan and Empire of the Sun, a pair of meticulous films about World War II and the Japanese internment camps of that era. But this director has always been a showman, an entertainer. So Munich is a thriller, Amistad a courtroom drama, Saving Private Ryan a war film. Lincoln, as written by the playwright Tony Kushner, doesn’t really fall into any recognizable genre at all — there is a brief battlefield scene, a dash of biographical portraiture, a handful of domestic arguments, a climax set on the House floor, and, offscreen, an assassination. But its main action is strategic, ephemeral, idea-based: How is law invented and implemented in the flawed, contingent system that happens to be the only one we have?

The answers to this question are not always conventionally cinematic. The passing of the Thirteenth Amendment took not just Lincoln but a whole host of other politicians, vote-wranglers, generals, and telegram-operators, and so Lincoln has a cast of dozens — Jared Harris as Ulysses S. Grant! Sally Field as Mary Todd Lincoln! John Hawkes as a lobster-smashing low-life who bribes politicians! Boyd Crowder from Justified as a timid congressman! And so on: James Spader, Hal Holbrook, David Costabile, Adam Driver, each passing rapidly across the screen, sometimes before you can even figure out who they are or why they’re there. Many of them do their work in dark and smoky back rooms. Most are wearing wigs. And all of them are speaking comfortably and sometimes without a lot of expositional aid about the complicated situation before them: a newly reelected president, a war on the verge of ending, a piece of law that passed easily through the Senate but now faces almost certain death in the House of Representatives, where Lincoln’s Republican Party holds a thin, divided majority and faces a committed and feral opposition. If you knew all of this already, I tip my old-timey hat to you; if not, you are like the rest of us: low-information voters 150 years removed from the vote in question. It’s a lot to puzzle through.

Day-Lewis’s Lincoln helps. It’s an astonishing performance: quiet, withdrawn, sporadically warm, iron and determined. Day-Lewis portrays Lincoln as a man almost literally haunted — at night, he dreams of sailing on ghostly ships alone. His Lincoln bears the love of his country like a physical weight: that reedy voice — historically accurate, apparently, and less distracting than it is in the trailer — those stooped shoulders, that pained walk. Kushner has written him as an elliptical man: the Great Procrastinator, a man who gets things done by delay, through calm inaction. He’s a teller of tendentious and unfunny jokes, of anecdotes that don’t quite connect. At home he’s miserable — Field’s Mary Todd Lincoln is perhaps less of a conniving witch than her onscreen predecessors, but her grief for the son she’s already lost and for the son (played by Joseph Gordon-Levitt) she may yet lose is smothering and total. The misery Lincoln has visited upon the country flits through his own home, a walking reproach.

The performance has a gravity around which the movie eventually orients itself. The personalities surrounding Lincoln begin to clarify — in particular, Tommy Lee Jones’s Thaddeus Stevens, the charismatic idealist to Lincoln’s deliberate incrementalist — as the vote on the amendment draws near, and the form of the film fully emerges. It’s a rare feeling: Lincoln tracks not the arc of a man but of an idea, and there is a complex and very real satisfaction to be had when that idea arrives.

To watch movies about Lincoln is to see the same little details repeated. He’s homely — Spielberg’s Lincoln opens with the president making a joke about his barber hanging himself. There is an unexplained aversion to gloves — in movie after movie, you see him leaving them behind, on side tables and nightstands and in his own pockets, unused. The people around him underestimate him. His marriage is unhappy. We know these things about Lincoln because of his own writings, because of the accounts of others around him at the time, and because of the work of historians since — this Lincoln, for instance, was partially based on Doris Kearns Goodwin’s Team of Rivals. But we also know them because we’ve seen this character cross the screen countless times before.

Movies, for most of us, can be as tangible and useful and memorable as anything in our own lives — they make real what was formerly abstract, what we could not on our own ever know. Ridding this country of slavery seems now like an inevitability, but that was never the case. Lincoln shows us just how contingent even big historical changes are, and what the process looks like just before those changes arrive. It’s a drama — a big, creaky one at that — a piece of fiction, not meant to stand as fact. But Spielberg’s imagination is an aid to our own.