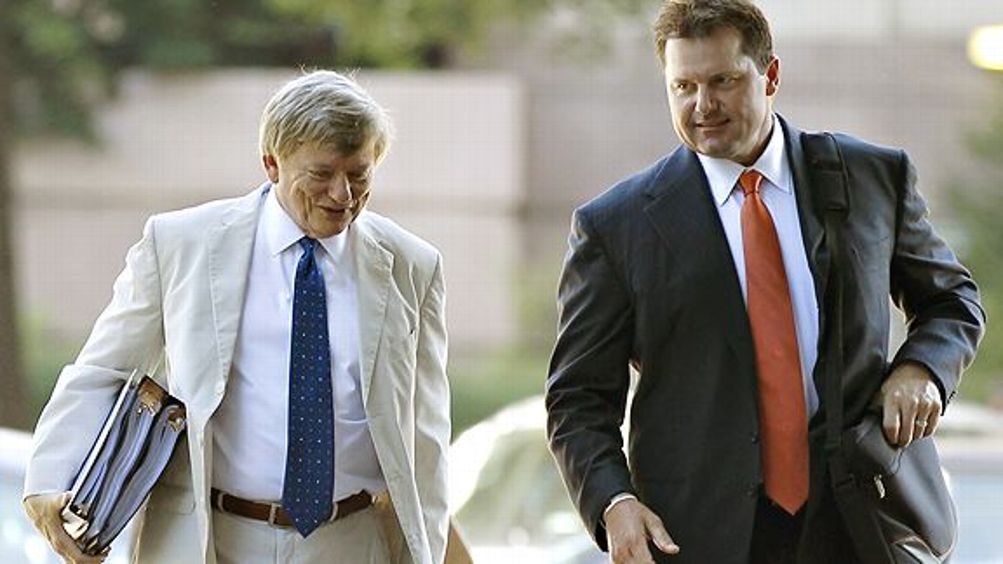 It was declared a mistrial, and, sadly, I’m inclined to agree. On July 13, Roger Clemens arrived for the first day of his Washington perjury trial in a sheeny dark gray suit, cobalt shirt, and complementary tie. He wore blocky black shoes and carried a nylon computer case in one hand and a smart phone in the other. He was Today’s Man. He was a loop on the Beltway. He was the guy on pages 20-44, 123, 230-356, and 377 of a book John Grisham has yet to write. He dressed like he was going to work.

He was present for the four-day jury screening and saw prospective jurors come and go. Even so, he couldn’t have known that so many of the 10 men and two women selected to serve would come dressed for church. That suit of his could have used a little religion. The jacket was long. It had three buttons, and, despite the good tailoring (he did look comfortable), it made him look sad, which the not the same as looking sorry.

Clemens made the walk to the Federal Courthouse alongside his lawyer, Rusty Hardin, one of those flashy Southern attorneys whom Grisham has written about. Hardin wore a tan suit, white shirt, and yellow tie. If Clemens was dressed for a convention, Hardin was dressed for the photo pool that wasn’t allowed in the courtroom. Hardin is always dressed this way. Neckties in pink and powder blue. Suits in putty, ivory, and periwinkle. You can tell he must be a good lawyer since these are clothes that, unless they were being worn by Matthew McConaughey, would make a jury pause and a judge peeved.

If it wouldn’t have made Clemens seem more like a royal dick than some people already believe him to be, I’d have suggested they switch. Hardin’s wasn’t the greatest suit (something strange kept happening with the fabric at the top button), but it had just the right balance of country club lunch date and closing argument.

Of course, Hardin wouldn’t get the chance to make a closing argument.

Federal prosecutors provoked a mistrial when they exposed the jury to inadmissible evidence involving Andy Pettitte’s wife. If you were inclined to roll your eyes at Congress for calling the 2008 hearing that started it all, you might be really mad at how this turned out — and how fast it ended. I am. With all due respect to The Smurfs and a new season of Basketball Wives, this trial was shaping up to be up the event of the summer. We weren’t allowed in, but the names scheduled to pass the press gallery over the anticipated weeks were drool-worthy: Pettitte, Joe Torre, David Cone, Jorge Posada, Jason Giambi, Mike Stanton, Jason Grimsley, and Chuck Knoblauch. How satisfying it would have been to stop Jose Canseco on the way into the courthouse and ask, “Who are you wearing and where would you inject?”

After Judge Reggie Walton made his declaration, Hardin emerged outside the courthouse in a sand-colored suit, white shirt, and blue, specked tie — it was attire that said, “I told y’all.” Watching Hardin address the media in those clothes, you might have been inclined to shake your head and say, “If that don’t beat all.” Hardin once defended Victoria Osteen, the wife of the gleaming, excruciatingly well-coiffed televangelist Joel Osteen, and a bit of that relationship appeared to creep into his press conference. “It’s a beautiful day,” Hardin said, his jacket open and his arms spread wide, though not nearly as wide as his Osteen grin. It’s possible the jury came dressed for church because it knew it’d be getting some. 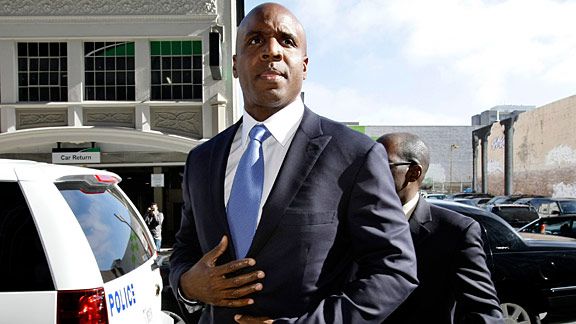 Viewed from home, the most telling thing about Clemens throughout those six days was how strangely deferential he seemed in his lawyer’s presence. As Hardin beamed and proclaimed, Clemens stood visible several feet in the background. Clemens’ arms were folded in front of him. His head was occasionally down. He wore an orange tie and his least remarkable suit yet (a bluish coal with dark stripes) that had no hope of upstaging Hardin. All he managed to say was that he wouldn’t be saying anything at all.

This is exactly how I expected Barry Bonds’ somewhat lower-key perjury trial to end in San Francisco last spring: with a shrug. It lasted all the way to a verdict, albeit a lackluster one (a single count of obstruction of justice), but still. For the weeks the trial went on, Bonds looked stellar.

He favored crisp, dark-blue, modestly lapelled suits with only a button or two, and often wore them over a white or light-blue shirt and a perfectly knotted, perfectly matched necktie. Buttoned, the jacket closed at his abdomen, and since Bonds has shed his steroid-era body, the effect was sleek. There was no bulging or popping, and his notoriously large head just looked right atop all those swift, clean lines.

It provided a daily contrast to poor Greg Anderson, Bonds’ former trainer, who went right to jail on the first day for refusing to testify against his childhood friend. In March, he arrived at the San Francisco courthouse in a dark suit that was a size too big. This is how Bonds used to dress for public appearances, like a weightlifter chaperoning a prom.

But in the last few months, something changed. He found a friend or a stylist who urged him to look as good as he always seems to feel. Bonds wore sunglasses, thin, striped ties, and shoes to perjure for. He smiled — smiled — and projected the confidence that Clemens was pretending to know nothing about. Bonds was dressed for uncharacteristic openness in a trial that didn’t require him to say much of anything. He let the clothes speak for him. Clemens was dressed like a man with something with to sell and something to hide, like a salesman. Except Clemens was also passive where Bonds was aggressive. Both men dressed like they were trying to get away with something, which, in a sense, they have.