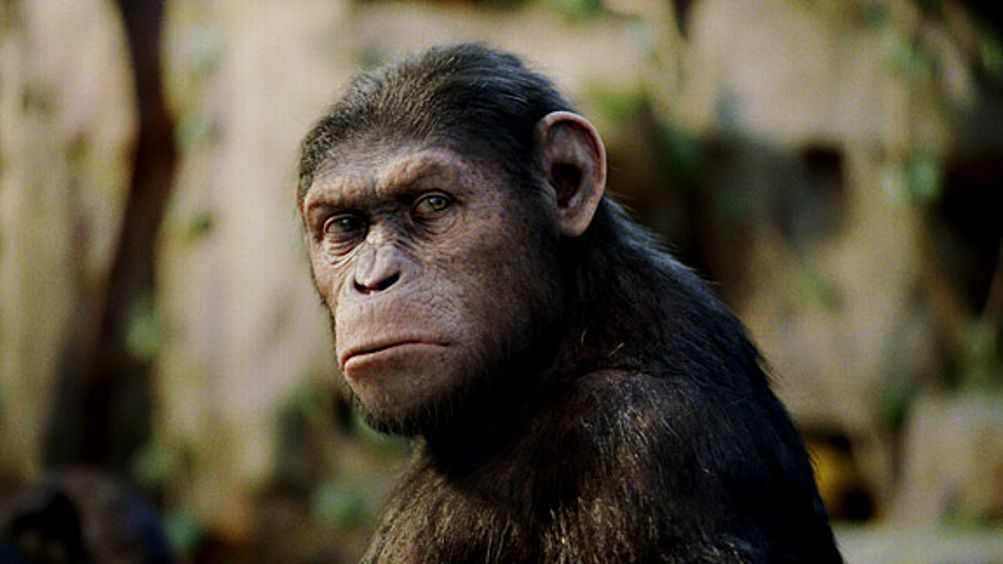 I don’t know how I feel about monkeys. I almost never eat bananas or listen to Supergrass. My mind is caged. My back is silver. Even in an empty room, my ears are filled with the sound of howling. Yet how can I overcome this confusion? How am I supposed to rationally understand the role of monkeys in modern society when all our high-profile monkey films are so contradictory? Sometimes I think movies are not the best way to understand primatology.

Hollywood has delivered mixed monkey metaphors for multiple decades. Do we live in a world where orangutans can help us win bar fights (Every Which Way But Loose), or do superintelligent monkeys want to terrorize the quadriplegic community (Monkey Shines: An Experiment in Fear)? Perhaps we’ll never know. There are two important monkey1 movies currently in theaters, and neither one ends the argument: Project Nim, a documentary that suggests treating chimps like humans makes chimps depressed, and Rise of the Planet of the Apes, a second-tier blockbuster that suggests engineering chimps to become more human will prompt them to initiate prison riots and attack helicopters with log chains. Both of these scenarios strike me as reasonable, but I’m not sure what the takeaway is intended to be. I suppose it’s that “humans are evil,” although I don’t know why we need to involve chimps to reach that conclusion.

I’m a pretty massive Planet of the Apes fan, even though I’m never able to watch an entire Planet of the Apes movie without reading a magazine. It’s definitely my favorite film franchise that’s 80 percent boring. I really, really love the first 20 minutes of the 1968 original film, and I’ve probably rewatched that opening sequence a dozen times: I relate to Charlton Heston’s character2 and adore the idea of gorillas riding horses while playing instruments that remind me of Jonny Greenwood’s solo album. There are numerous scenes in this film that can be watched repetitively (I still get psyched whenever the orangutans use Robert’s Rules of Order), and Nova remains a compelling romantic companion (assuming you only go on dates in public libraries). But still — those last 40 minutes tend to drag. In general, I enjoy reading and talking about the Apes movies more than I enjoy experiencing them.3 The 1970 sequel Beneath the Planet of the Apes is intriguing at the onset and features a charmingly nihilistic finale, but it’s not so stellar in the middle; Escape from the Planet of the Apes involves a time warp; Conquest of the Planet of the Apes involves Ricardo Montalban; Battle for the Planet of the Apes doesn’t involve anything I can remember without using the Internet. The summer 2001 reboot with Mark Wahlberg was idiotic and probably caused 9/11,4 so I didn’t have high expectations for this year’s Rise of the Planet of the Apes, even though it stars author James Franco. But it’s actually not bad. All the apes are CGI, and Franco does an admirable job of seeming emotionally involved with empty air5. The film’s premise is that researchers trying to cure Alzheimer’s disease6 accidentally make apes self-aware and extra clever. The lead chimp learns sign language (which makes sense) and then spontaneously speaks English (which does not), and he organizes all the other primates like a hairy Donald DeFreeze. They attack San Francisco and (presumably) set the stage for what will become the post-nuclear dystopia of the ’68 original.7 On a scale of 1 to 10, I would give Rise … some arbitrary number between 3½ and 6¾. But on balance, I didn’t learn much about man’s relationship with apes. It’s kind of like trying to learn about father-son relationships from Tron: Legacy.

The same criticism cannot be made about Project Nim. Directed by Man on Wire architect James Marsh (and based on the Elizabeth Hess book Nim Chimpsky: The Chimp Who Would Be Human), it shares at least one narrative conceit with Rise of the Planet of the Apes: It begins with the straightforward notion of raising a chimpanzee in a wholly human environment. But this really happened, so the result is less dramatic and way sadder. The scientific genesis behind the Nim endeavor was deeper than curing a disease — what Columbia professor Herbert Terrace wanted to unlock was the central “nature vs. nurture” question. His theory was that if someone raised a chimp as a human (and taught it sign language at an early age), it would force the chimp to linguistically develop the way a human child does — instead of merely mimicking hand signals, it would “create” language and intuitively understand why it was communicating. It would think like a person, and we could comprehend those thoughts. Unfortunately, this experiment was attempted in the 1970s. The hippie who initially cared for Nim breastfed the chimp from her own bosom (and still does not seem to find this odd, even in retrospect). They try to teach Nim to use the toilet, which works about as well as you’d expect. Several people let the chimp smoke weed. Pretty much every single person involved with this project either loved Nim too much or did not love him enough, and the result was chaos. Nim bites a few women in the face and ends up in a prison-like laboratory, but (of course) he can’t relate to other chimpanzees. They send him to a farm for abused horses, and he’s like, “What am I doing there? Do I look like a damn horse to these people?” It’s quite disturbing.8 Moreover, Terrace’s project ultimately fails, so the upshot is that scientists essentially made a chimp just smart enough to be intellectually tortured.

Outside of the superficial, I suppose there isn’t much connecting these two films. But they both illustrate that same backward, irrational obsession Americans have with lower primates: We always want to immediately imagine these nonhumans9 are pretty much like us (because they walk on two legs and use tools and smile). We start from that position and become disenfranchised when it proves false. And that’s completely unlike the way we think about exotic strangers, even though exotic strangers really are pretty much like us. Socioculturists are forever obsessed with the concept of “The Other” and how it drives thinking; for example, whenever rich suburban kids get interested in hip-hop, it’s reflexively assumed the attraction is based on an obsession with a world unrelated to their own. People try to figure out “what it means,” because it seems like the audience has nothing in common with the artist. Yet — obviously — the gap between any human artist and his audience is significantly less than the gap between James Franco and a chimp. Why do people assume chimps are almost human when we don’t even think that way about other humans?

In 2005, a primate scientist at Emory University concluded that the genetic construction of the chimpanzees is 96 percent similar to that of man. That’s kind of amazing. But perhaps that last four percent is the only chunk that matters.

(Un)Reality and the Football Hall of Fame
Frankenstein’s Monster: A second-by-second analysis of Edgar Winter’s finest nine minutes
Why AMC’s Breaking Bad Beats Mad Men, The Sopranos, and The Wire.
Is the Fastest Human Ever Already Alive?