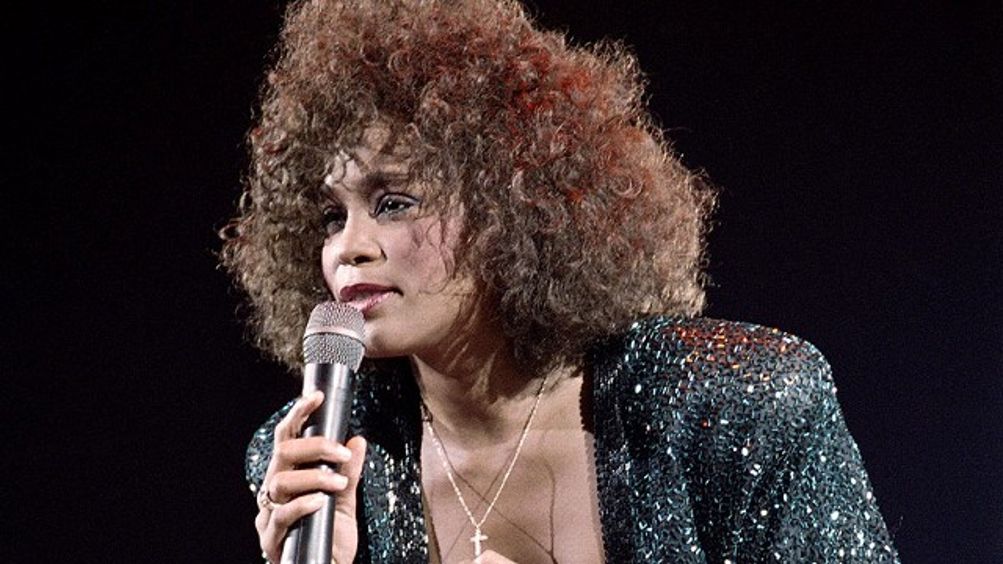 Given how majestically slim she always was, it’s a little odd to admit that I can remember bellowing that Whitney Houston was The Heavyweight Champion of the World! on the MTV News floor back in the ’90s. But in an era with Celine, Mariah, and a host of other Diva Supremes, it seemed worth noting just who the GOAT was. Even in the supposedly non-competitive field of entertainment, sports metaphors came to mind with Whitney. Her voice seemed athletic somehow — soaring and swooping at will, without apparent effort, just for the hell of it. And like an athlete, she would lose that amazing ability at an early age.

Whitney could blow the doors off any ballad, of course, but in the bygone era of MTV, that didn’t necessarily make her all that popular. Back in 1989, atop the parking lot at Super Bowl XXIII in Miami, we did a two-hour live pre-show with the Bangles … made perfect sense, see, because the game was Bengals-49ers.1 During a TV timeout in the fourth quarter, they played Whitney’s “One Moment in Time” on the big screen. Maybe it was just the tension of the game — after all, no one had told me they’d seen John Candy there — but her booming vocal made me shiver a little in my Jerry Rice jersey. So while not wanting to appear appallingly out of the demo — I was well into my 30s by then — I did mention to the on-air talent next to me (I’m not gonna say who it was)2 something like, “You know, if ever there were a time and place for a song like that one, this is really it, isn’t it?” His response? Naah, not so much.

Back then, unverified, occasionally elaborate rumors about Whitney’s private life would whiz through the hallways like tennis balls. But among an elite cadre of MTV News producers, there were two pieces of footage that had been analyzed frame by frame, like the Zapruder film. One was Paula Abdul’s career-ending performance at the 1991 VMAs, the live equivalent of the Billy Squier “Rock Me Tonite” video. The other was Bobby Brown at the 1989 VMAs picking up something off the stage that had apparently fallen out of his pocket. People sure seemed to think it was a vial of something. So when he and Whitney got together, during what seemed like the only five minutes when their stardom Venn diagrams intersected, when they were even arguably on the same level … well, I should stop there. Because I don’t remember anyone predicting what would happen to Whitney in the late ’90s, in the same way that no one predicted that Lauryn Hill — who went to Columbia, where she lived on the same floor as Marcellus Wiley — would, after The Miseducation of Lauryn Hill, fall off the pop planet.3

Whitney was still altogether luminous when she made The Bodyguard with Kevin Costner. They shot the exteriors for the Academy Awards scene near the end of the film outside the Park Plaza Hotel in downtown Los Angeles. There were hundreds of people at work — spectators, attendees, all the various jobs of an award show arrivals area, this time being played by casted extras.4 Wearing a tuxedo, Air Jordans, and enough hair product to meet Vanilla Ice’s needs for a week, I had a tiny role as the reporter who would interview Whitney’s character as she got out of her limo and headed for the awards. My lines had been written by Lawrence Kasdan. I think we did two takes, max. She was flawless. When someone with the production told me later that the people working on her next film might have their hands full, I couldn’t imagine what that meant.

Much later,5 I was interviewing Whitney about the film for MTV, at an overheated location in the west 20s in New York. She was visibly pregnant with Bobbi Kristina and bore the brunt of the hot lights as we talked. Finally we were done, and she could go — well, wait a minute. Someone had a promo they wanted her to do, for the United Negro College Fund. If there were ever a moment for a diva, or any celebrity, to pitch a fit, this was it. (Seen ’em do it.) So I’ve never forgotten that Whitney — with-child out to here, remember — didn’t raise an eyebrow or register a word of inconvenience. She knocked out the promo with conviction, and a smile.

Even in Hollywood, there are personal descents that evoke only sad shakes of the head, especially where there’s sheer, unassailable talent in the mix. I recall standing outside the Vanity Fair party at Morton’s during her “erratic behavior” era, as she stood alongside Bobby Brown and blurted out things in staccato, like “We’re in it to win it.” At one event, she seemed to have put her wig on backwards. When they fired her from the Oscars in 2000 during rehearsal, the shock on the red carpet was merely momentary. Still, when I saw “R.I.P. Whitney Houston” trending, I thought it was a Twitter hoax. In my crosswired brain, part of me will think of her and the Michael Jordan of the ’80s together — the same explosiveness, the same ability to evoke jaw-dropping wonder, and what seemed at the time like the same joy in being able to do all that.

Originally, you might have heard, Whitney wasn’t going to sing Dolly Parton’s “I Will Always Love You” in The Bodyguard. That was apparently a late switch, because the song they’d initially picked had just been covered for the Fried Green Tomatoes soundtrack by Paul Young. It was a Motown song first performed by Jimmy Ruffin (brother of the Temptations’ David Ruffin) — a slow, soaring, sad song titled “What Becomes of the Brokenhearted.”

What becomes of the brokenhearted
Who had love that’s now departed?
I know I’ve got to find
Some kind of peace of mind.
Help me …

Chris Connelly is a reporter for ESPN.