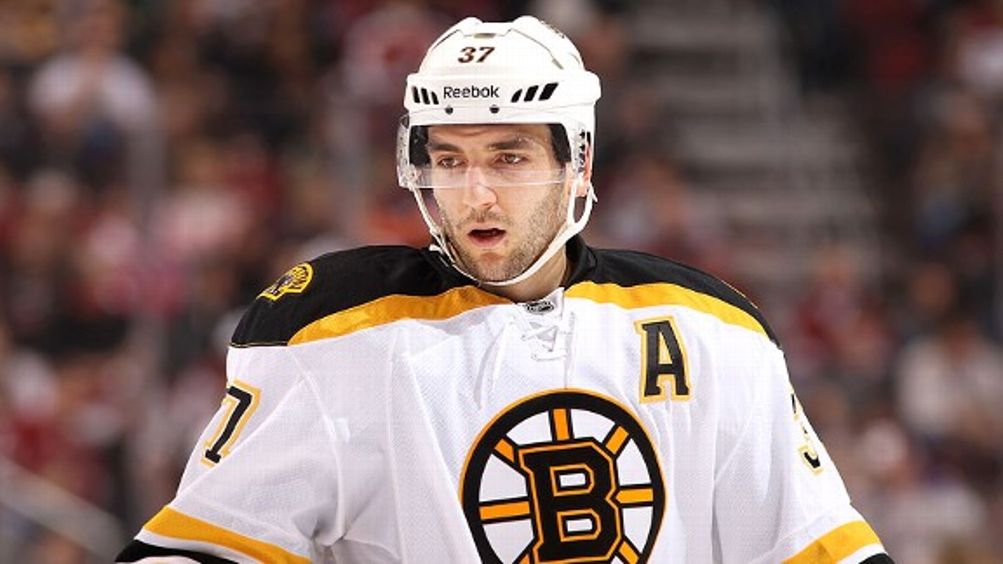 Just under four minutes had gone by in the second period of the Boston Bruins’ Wednesday night road game against the New Jersey Devils, and the Bruins were seconds away from killing off a New Jersey power play. With the man advantage winding down, the Devils’ Adam Larsson, a prized 19-year-old rookie defenseman who was picked fourth overall by the Devils in this year’s draft, received the puck at the right point and took a low, heavy slap shot that he hoped might find its way through a screen, or off a stick or a skate, and somehow get past Bruins goaltender Tim Thomas to tie the game at 2-2 …

Barely five seconds later, the Bruins were instead up 3-1, because Boston’s Patrice Bergeron had barreled out toward the blue line with such speed and strength that the attempt caromed right off him and back behind Larsson, who could do little else but reach back and try to impede Bergeron’s forward momentum with his stick. The ref raised his arm to signify a delayed penalty on Larsson, Bergeron barely even registered the contact as he broke away toward Martin Brodeur, and the Devils goalie barely even had a chance, ending up sprawled onto his side as Bergeron slid the puck past his outstretched glove and into the net.

It wasn’t a shorthanded goal, technically, as the Bruins penalty to Nathan Horton had ticked down to zero right around the time that Bergeron flew past center ice, but start to finish it was as close as could be to the 13th shorthanded goal surrendered by the Devils this season. (In contrast, the Bruins are the only team in the league to have given up none.) One thing it absolutely was, though, was pure Selke.

“It’s the body, it’s the head, it’s the feet, it’s the hands that make it work for Bergeron,” gushed NBC Sports’ Pierre McGuire.

A strange way to put it, perhaps, but you could pretty much say the same thing about the Boston Bruins in general over the last two months, a span in which the team has only three regulation losses1 following a groggy 3-7 October start. They are the NHL’s most productive team in goals scored per game, the stingiest in goals allowed, and they have amassed a gaudy +60 goal differential less than halfway through the season. No one has a better tandem in net than Tuukka Rask and Thomas, who are, respectively, first and second in the league in save percentage and first and third in goals against average. (Rask has appeared in 13 games this season, while Thomas has been in net 25 times.) No one is better at faceoffs. Only the New York Rangers have gotten into more fights.

If there’s a category in which the Bruins don’t straightforwardly shine, it’s in league scoring leaders. The team has no one who is within the top 30 in individual points. But that’s precisely what makes them so scary. In the Devils game, which they went on to methodically win 6-1 — the 10th time this season they’ve scored six or more goals — there were 12 players who earned either a goal or an assist, and only five who did not. How can you defend against that kind of depth? (And sync: It seems like each goal is tic-tac-toe-ier than the last.) And even if you’re able, how can you score? The last time the Bruins gave up more than two goals was December 10.

But being this good halfway through the season, or even through to the end of the season, is no sure sign of a Stanley Cup run. Just ask the Washington Capitals. Or ask the Vancouver Canucks, who lost to Boston in seven games last year in much the same way that everyone keeps losing to them now: by getting beaten up and worn down, getting shut down and lit up. The Canucks are one of the few teams that are up there with the Bruins in most statistical categories, which makes this Saturday’s afternoon showdown between the two teams — the first time they’ve met since the Bruins hoisted the Cup on Vancouver’s home ice as the streets outside raged with fire — a game that is not to be missed.

Another game worth checking out takes place tonight: the gold-medal game of the World Junior Championships between Russia and Sweden. The annual under-20 tournament has long been a hotly contested and closely watched showcase of the world’s rising hockey talent.2

Russia, which shocked Canada last year in the finals (and then got so drunk they were kicked off their flight out of Buffalo the next morning), faced off against its Canadian rival in Tuesday night’s semifinals and very nearly squandered a 6-1 lead in the third period. They held on to win 6-5 and will face Sweden, the only team to have defeated them in this year’s tournament. Sweden advanced by virtue of a 3-2 shootout victory over Finland in which they battled back from a 2-0 deficit. A gold medal would be their first since 1981.

Sweden has been led lately by Max Friberg, an Anaheim Ducks prospect who scored the game-tying goal and assisted in overtime during Sweden’s round-robin game against Russia this weekend, and who had a goal and an assist in the third period against Finland, not to mention the shootout winner. On the Russian side, players to watch include Nail Yakupov,3 whom many project to be the first pick in next year’s NHL draft, and Yevgeni Kuznetsov, who leads the tournament with six goals and 13 points and raised the ire of certain Canadian writers with his ebullient play Thursday.

Kuznetsov, whose rights are owned by the Washington Capitals but who could very well end up remaining in Russia to play for the KHL, was profiled at age 12 — a year after his older brother was murdered in 2003 — in Dave Bidini’s Hockey Nomad film. It’s really worth checking out, just as the game tonight will be.

The Montreal Canadiens have tried everything to get a jolt out of their team, firing an assistant coach earlier this season and more recently bidding au revoir to head coach Jacques Martin. But it was, of all things, the shelving of the team’s usual goal-celebration song in favor of an old, pre-lockout light-the-lamp anthem that seemed to actually do the trick — at least for center Lars Eller. The 22-year-old Dane, who entered Wednesday’s contest against the Winnipeg Jets with four goals on the season, scored four more last night alone, the last a penalty shot spin-o-rama, in Montreal’s 7-3 win. He must really like the new-old song.4

The whole performance even moved evil unilingual Anglophone coach Randy Cunneyworth to work on his French in the postgame.

Other goals I enjoyed this past week included (but are not limited to): some vintage Ovechkin,5 the hockey equivalent of an alley-oop pass, and Dallas’ Loui Eriksson making everyone else on the ice look entirely worthless.

Tampa Bay coach Guy Boucher had a quote worthy of the name of this section, saying of his team following its 7-3 loss to Toronto: “We’re horrible against everybody on the road. Sometimes I feel we could have four orange cones against us on the road and still wouldn’t manage to get a shot.”

The Lightning’s offense has certainly lagged, despite the efforts of Steven Stamkos, who leads the NHL in goal scoring with 27.6 But it’s the team’s own defense and goaltending that are more likely to conjure the image of inert traffic cones. Injuries to the blue line — from Mattias Ohlund, whose projected midseason return from knee surgery no longer seems possible following reports that he’s had significant setbacks in his recovery, to Victor Hedman, who was recently sidelined with a concussion — have combined with unreliable goaltending to make Tampa Bay one of the league’s most porous squads. Only two other teams have given up more goals against.

When Tampa Bay GM Steve Yzerman was spotted Wednesday night at a game between the Vancouver Canucks and the Minnesota Wild, speculation increased that he’s considering making a move. But Tampa Bay’s problems are such that it’s hard to pinpoint whether he was taking a look at Josh Harding, Minnesota’s backup goaltender who could be a worthy replacement to struggling Mathieu Garon or 42-year-old Dwayne Roloson, or the deep corps of defensemen on both the Wild and the Canucks. There’s a good chance it was probably both.

I tweaked the usual title of this section ever so slightly this week.12 That’s because the NHL has had quite a bit on its hands — if you thought your first couple of days back at work after the holidays have been brutal, just be glad you’re not employed by the league. In addition to the Shanabans doled out yesterday to the Blackhawks’ Daniel Carcillo and the Flames’ Rene Bourque, the league issued a $30,000 fine to Rangers coach John Tortorella for comments he made following the Winter Classic in which he called the officiating “disgusting.” And the NHL also announced the Florida Panthers’ Krys Barch, who had been accused of uttering a racially charged remark at the Canadiens’ P.K. Subban on Saturday night, would be suspended for one game.

Now, I wasn’t there for what Barch said on the ice, obviously, but the rumors are that, after seeing Subban fall down, Barch later inquired as to whether the Canadiens player had perhaps chanced upon the detritus of a certain fruit commonly depicted in cartoon gags and games of Mario Kart to be mighty slippery. Barch insists that it was not an intentionally bigoted statement, but the whole thing seems pretty lose-lose regardless. If he did mean that sort of harm, well … that simply ain’t OK, particularly considering the Wayne Simmonds incident this fall.13 If he said it with complete innocence, however, that’s pretty upsetting, too — I need my NHL players to have a better trash-talking arsenal than “Have a nice trip? See you next fall!”-level zingers, you know?

I was there when Tortorella made his remarks, though, and I think the general reaction in the room was that he was kind of half kidding. I say “kind of half” because anyone who watched the closing minutes of the Winter Classic knows that his underlying assessment of the quality of the officiating was pretty legit.14 On the other hand, anyone who actually thinks that Tortorella really believes that “NBC got together with the refs or what to turn this into an overtime game” must not be very much fun to hang out with.

I’m not disagreeing with the fact that Tortorella got fined. Any coach knows better than to explicitly call out officials (and broadcast partners!), especially after a game with as many eyes and ears as the Winter Classic. The fact that the clip has been so repeatedly played on TV, and the conspiracy theory vibe of it all, makes it even more difficult for the league to ignore. But I do think there’s a reason that it took more than a full day for the whole episode to really blow up. And that’s the fact that most of the media assembled in the room sensed that, while a “good quote” and “something that has to be covered,” his words weren’t quite as malicious in context. Really, Torts’ biggest mistake was that, with his never-changing expression of half exasperation and half twinkle, he’s just lousy at being much of a ham.