Can the Houston Texans Make a Playoff Run Without a (Good) Quarterback? 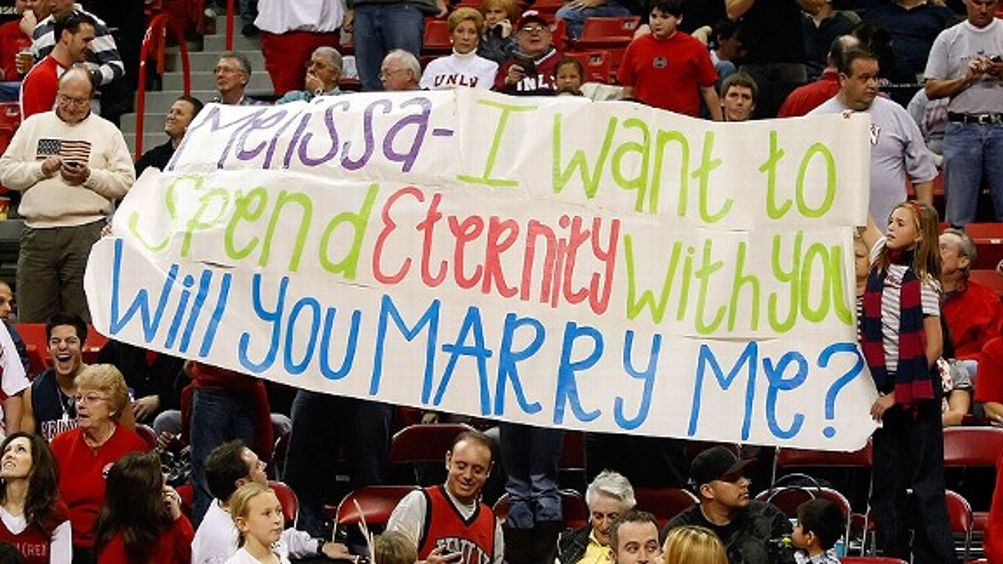 I know people who have done it on couches, in airplanes, and on top of mountains. They’ve done it behind closed doors and in front of crowds of thousands. When they do it wrong they’re humiliated, but a good performance will yield a yes, YES, YES! And, apparently, there are people willing to pay hundreds and even thousands of dollars to do it with a hired professional.

That’s right. According to the New York Times, there’s a new cog in the matrimonial machine: “a group of consultants called proposal planners, who advise men, and sometimes women, who want to propose but are flummoxed about how to go about asking this life-altering question memorably.”

Have a cool seven grand lying around even after you’ve paid two months’ salary on a ring? Then you can have a proposal scenario like the one Sarah Pease helped one man organize.

Ms. Pease recommended Belleville, a Brooklyn bistro where Mr. Fowkes made his pitch — successfully — in a room decorated with a chandelier and a wrought-iron arch, as four singers did a rendition of “Marry Me” by Train.

I know nothing about cars and at first thought that said “Humpmobile,” by the way, which was amazing enough that it almost would have made up for the Train.

The article includes an appearance by one Fort Worth proposal planner named Michael A. Bloomberg, “who charges $100 an hour and up to $2,400 for helping arrange the crucial moment.” Can you imagine if a certain other man by that name helped coordinate your special question? He would be the best/worst planner of all time. The night would run at a brisk clip, rogue French fries would be smacked out of your hand, Lady Gaga would make a cameo appearance, and at the end you’d have to repeat the whole proposal in broken Spanish.

Unless you get the chance to work with Hizzoner himself, I’d recommend just following the sage advice of the Philadelphia Flyers’ Claude Giroux. On Sunday, during an open skate for the Flyers and their families on the outdoor hockey rink that had been set up for the NHL Winter Classic, Giroux’s sister was proposed to right on the ice.

Giroux, who knew about the plan, told NHL Network how it all went down: “He was skating around for a half an hour,” Giroux said. “He was all nervous, like, ‘I don’t know how to do it.’ And I’m like, ‘Grow some balls! Just do it.'”

There you go. Flawless and free advice. Now, go take the four figures you just saved on hiring a proposal planner and use it to stock the open bar at your wedding reception. Your guests will thank you.

It’s fitting that the most noteworthy wedding story of the month appeared not in the Weddings section of the Times but rather in the N.Y./Region pages. Because this wedding was sooooo not a normal wedding; the bride and groom “abhorred the idea of a traditional wedding” and “did not want their wedding to be ‘just about us’ … but rather, about the world of creativity and social purpose that they inhabit.”

Translated, this basically just means the groom asked the guests to recycle their cups “because we’re really in a serious situation with climate change.” No word on whether they recycled all these cards:

When guests arrived on Saturday night two weeks ago, they were greeted with name tags that asked them to declare a commitment. Lest they not take the request seriously, the hosts had additional cards printed that asked them to “Name something you are really committed to.” The cards contained further imperatives: “Name one action you can take in the next 24 hours that is aligned with your commitment.”

That world of creativity and social purpose sounds like kind of a pain in the ass to inhabit.

Other highlights include the bride’s former job (“the creative director of Moomah, the children’s cafe in Tribeca that caters to parents in denial about some of the distasteful aesthetics of child-rearing”); the groom’s current job at a business/cult/organization/it’s unclear called “LifeEdited” as someone who tells people to move into tiny apartments with Murphy beds and expensive but aesthetically pleasing Eames chairs (“The motto of the movement is ‘the luxury of less'”); and the comparison of their wedding — a free-for-all event held at a big “loft-like store for arty bibliophiles” — to Caroline Astor’s balls and Diddy’s “inaugural White Party in the Hamptons in 1999.” Somehow I don’t think the guests at those particular events “sat down to a series of talks, with PowerPoint presentations, on subjects of interest to the couple — ecological efficiency, neuroscience, holistic healing.”

In other December nuptial news …