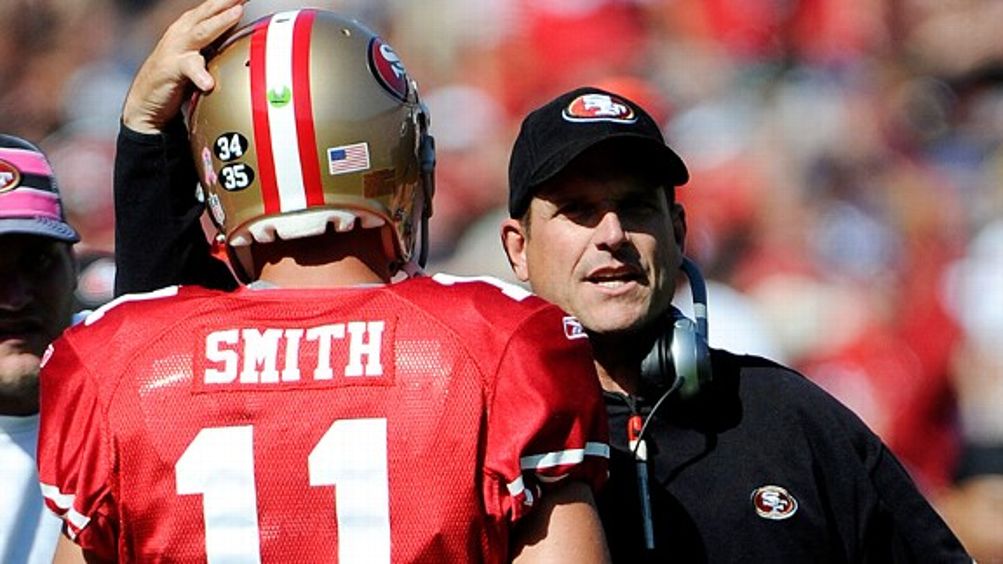 Remember the one from 2011 where the Saints were favored to go on the road and take out the clearly inferior NFC West champions? You know, the one where the dominant passing offense flew out to take on the team that just didn’t have the weaponry to compete with Drew Brees’ killer passing attack? The one where all the home team had to fight back with was home field advantage, a sound running game, and excellent special teams? Where the grinders with the inflated record couldn’t hide behind their schedule anymore?

If you don’t, well, just wait until Saturday. You might get a chance to relive it.

It wasn’t the Saints offense that disappointed in Seattle last year. Facing one of the league’s worst defenses in a hostile atmosphere, the Saints put up 36 points, with Brees throwing for 404 yards and two touchdowns. It’s not their fault that the defense couldn’t hold up. But that was last year. This year, they play the 49ers, who allowed fewer points per possession than any other team in football this year while creating turnovers on 18.9 percent of drives. Even more distressing for New Orleans, the 49ers are a healthy defense that will have virtually every contributor from this season active and close to 100 percent for Saturday, thanks to the combination of serendipity and a second bye week.

Perhaps most disturbingly for Saints fans is that Brees’ offense has established a trend of turning into something far less predatory when it moves away from home. In fact, among the league’s top ten offenses, no team loses a greater percentage of its scoring on the road than New Orleans:

ROAD TRIP BY THE NUMBERS

You may note that the chart actually includes 11 teams, which is no accident. Did you know that the 49ers score more points per game at home than the Saints do on the road? We didn’t, that’s for sure. A disgruntled Saints fan might now point to the 48 points that the 49ers dropped on Tampa Bay and call it an outlier, sure, but let’s also remember that the Buccaneers followed that disastrous game against the 49ers by returning home and beating these very Saints, 28-20, for their final victory of the year. You might think about the New Orleans offense and think about their majestic performances against the Lions and Giants, but that was in the Superdome. Away from home, in addition to that Bucs loss, the Saints scored 21 points against the Rams (with only eight first downs!), 22 against the Titans, and 23 against the Jags. Those are some ugly totals.

What causes this decline? Well, for one, the Saints turn the ball over more frequently. In their eight regular-season home games, New Orleans recorded just seven turnovers on offense. In their eight games away from home, they had 12 turnovers. They get fewer short fields, since their defense forced 11 takeaways in eight home games and just five in eight road tilts. They also find themselves occasionally stuck on grass as opposed to the wondrous turf that springs so many big plays in New Orleans. The grass depresses Brees’ numbers across the board. Guess what type of field the Saints are playing on this Saturday?

In addition, the 49ers could be a particularly tough matchup for the Saints because of how well they match up against New Orleans’ strengths. After years of building their offense around Marques Colston and a variety of deep threats, the Saints have recalibrated their offense around tight end Jimmy Graham and halfback Darren Sproles. Graham and Sproles each led the league in targets at their positions, with 149 and 111 respectively, and they each were thrown more passes than any of the New Orleans wide receivers. For most teams, it’s a matter of picking your poison: Graham stretches you vertically, and if you go after him, Sproles stretches you horizontally. If only there was a team that had two elite linebackers who were capable of going stride-for-stride (or as close as possible) with those weapons and tackling them when they do get the football!

Well, welcome Patrick Willis and NaVorro Bowman into the mix. You’ve heard of Willis by now, of course, but Bowman’s had a stunning season in his first year as a starter, culminating in his placement on the Associated Press All-Pro team last week. Any thoughts that Bowman was simply benefiting from the presence of Willis alongside him seemed to disappear when Willis missed the better part of four games1 with a hamstring injury. The Niners did allow their first rushing touchdown of the season during Willis’ absence, but opposing teams actually saw their rushing average decline, as they went from averaging 3.6 yards per carry with Willis in the lineup to just 3.2 yards a pop with Willis on the bench. While Sproles and Pierre Thomas were able to extend drives for the Saints last week by creating missed tackles and getting extra yardage at the end of their touches, it seems less likely that the 49ers will allow such frivolities on Saturday.

In this instance, it might behoove the Saints to use different personnel sets and take some of the focus off of Graham and Sproles. Don’t be surprised to see the Saints use an “11” personnel package as their base set, with one running back, one tight end, and three wide receivers. That removes the fullback from the equation and makes running between the tackles more difficult, but the 49ers have the best run defense in football. Outside of a few plays to keep the defense relatively honest, the Saints should have no interest in running the ball anyway.

Employing three wide receivers should force the Niners to use the nickel as their base set on defense, which isn’t exactly where they want to be. It takes star rookie pass rusher Aldon Smith and places him right on the line of scrimmage, where he might not be quite as effective.2 Meanwhile, it also moves rookie cornerback Chris Culliver into the lineup as the slot cornerback, where the 6-foot South Carolina product would see plenty of 6-foot-4 Marques Colston, a tough matchup for even the biggest and baddest cornerbacks.

While the Niners might be able to slow down Graham and Sproles, the Saints should still get a big play or two deep down the field. Obviously, players like Robert Meachem and Devery Henderson are always threats to get behind the last defender and catch a bomb, but the Niners can be susceptible to the big play. Despite their stout defense up front, San Francisco allowed 12 pass plays of 40 or more yards this year. It’s hard to imagine that Brees won’t be able to find a little bit of time to make it 13 or more.

A year after they were embarrassed on national television by the tremor-inducing power of Beast Mode, the Saints produced a defense whose best feature involved staying on the field long enough for their offense to catch their breath. A top-ten defense in 2010, the Saints fell all the way to 28th in defensive DVOA3 this season, including a dismal 26th against the pass. And after finishing second in the league in takeaways during their Super Bowl season of 2009, the Saints had the second-fewest takeaways in football this past regular season. Yuck.

So how can the Saints stop the 49ers? Well, they can start by hoping that the Frank Gore from the second half of the season shows up, because after he sprained his ankle during the Week 9 game against the Giants, he wasn’t the same player. The oft-injured Gore entered that game with the Giants on a hot streak, as he had run for 100 yards in five consecutive games. Up to that point in the season, he had averaged 4.9 yards per carry and just under 98 yards per contest. His six carries against the Giants produced a total of zero yards before the ankle sprain, and he didn’t rush for 100 yards in a single game the rest of the season. His average carry load went from just under 20 to just over 15, but his efficiency numbers went into hiding. In the final eight games of the year, Gore averaged just 3.5 yards per carry, and he could only muster 53.6 yards per game. It’s worth noting that DVOA sees the decline as essentially nonexistent, since the 49ers ranked 23rd in rushing offense during both the first half of the season and the second half, but there are certainly unanswered questions about Gore’s health and his ability to contribute to a contending team right now.

Gore is also a fine pass blocker, but there may not be much work to go around in pass protection on Saturday. As we mentioned in this week’s The Fabulous and the Flops, the enigmatic Saints pass rush couldn’t muster even a single sack of Matthew Stafford last week. Defensive coordinator Gregg Williams is supposed to possess a bevy of exotic schemes designed to overwhelm the league’s more dreadful quarterbacks, but the Saints haven’t sacked an opposing quarterback since before Christmas. On the other hand, only five teams in the league had a sack rate higher than San Francisco’s 8.9 percent. Who will win this battle of mediocrity?

The Saints will have to really focus on stopping Michael Crabtree, since allowing big games to no. 1 wideouts has been a specialty of theirs this season. Opposing top guys have averaged 9.2 targets and 78.8 receiving yards per game against them this season, figures topped only by the Packers and Cardinals.

And here is where the Niners enjoy their hugest advantage. San Francisco’s special teams might have been topped by Chicago because of Devin Hester’s incredible heroics, but nobody is as effective across the board as Brad Seely’s unit in the Bay Area. Punter Andy Lee is the star, creating 13.3 points of field position value with his boots this year while giving his defense the league’s best average starting field position. Lee averaged a full 44 net yards per punt, and the only player within 2.5 yards of his performance was Saints young gun Thomas Morstead, who averaged 43.1 yards per boot.

The Niners also have a huge advantage on punt returns, where Ted Ginn has averaged better than 12 yards per attempt and scored a touchdown. The Seahawks didn’t break open the game with a long touchdown run on special teams in last season’s victory over the Saints, but they were able to gain consistent yardage and produce excellent field position. If the 49ers can do the same, they’ll be in good shape.

The Saints have a huge advantage at quarterback and wide receiver, but the 49ers have them beat at every other spot on the field. The league’s two best in-game coaches will square off, but expect Harbaugh to earn his team an extra possession with some sort of fake or trick play. (An unexpected onside kick against the master of the trade, perhaps?) New Orleans will get a big play or two, but their inability to force takeaways and score big totals on the road will come back to bite them. San Francisco 24, New Orleans 21.