Avoiding the Lockout and the Red Sox 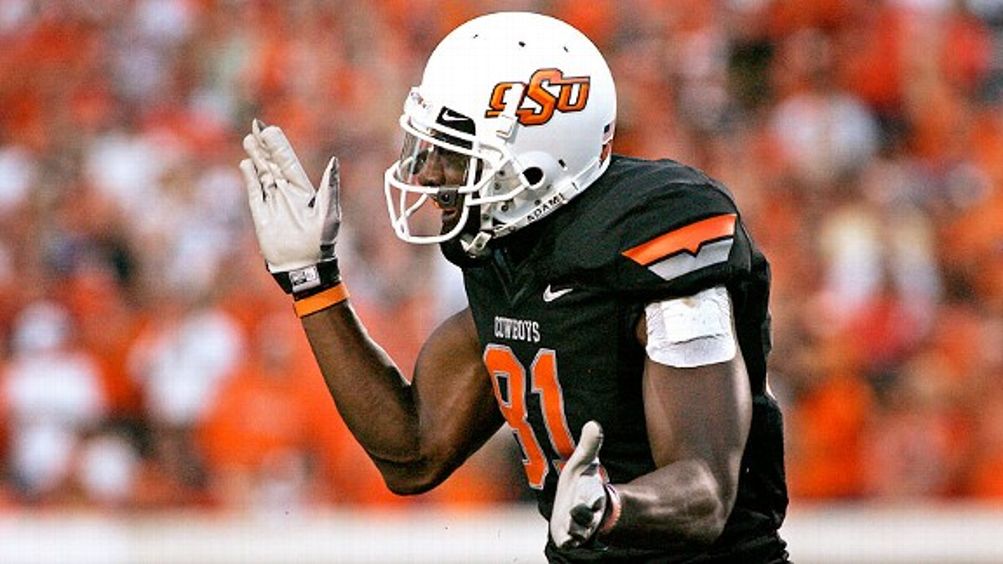 I know I’m always full of pep, always filling you with hope and esteem, but there’s also something to be said for choosing your battles. There are lots of fish in the sea and lots of receivers on the gridiron. Justin won’t be in the League for another year, but he’s already way out of your league. Scout and Rivals missed on this stud, but you won’t have to regret missing out on him because you never had a shot. They gave him three stars, sweetie, but for you he might as well be in another galaxy. Don’t cry. I don’t mean to be harsh. You’ve got your charms, especially all gussied up in that orange dress you found the last time you went into Tulsa, standing on the porch with your hands clasped behind your back, mock-shy, spinning a toe into the varnished planks. You’re sure pretty, just not as pretty as the Ardmore Assassin as he glides effortlessly under a fade pass in the back corner of the end zone, holding a defensive back off like a little brother — smooth stride, soft hands, six more points. Corralling this Cowboy is too big a job for the DBs of the Big 12, and it’s too big a job for you. I just don’t want you to get hurt. His coach is a man and so is Justin, and, after all, you’re just a little girl, a tiny-town girl with a spunky streak and a tight-in-the-waist baby doll dress you got at the Promenade Mall. Justin’s season can only end with Bedlam, and the best place for you when that sort of chaos hits is near the hearth in Daddy’s living room.

Georgia at Tennessee — Sorry, but this game always fascinates me. A lot of teams claim multiple rivals, my Gators no exception, and when two of those rivals square off there’s no possibility of a sour result. One of them will lose. A loss is worse for Georgia than for Tennessee, as the Vols are patiently building toward next year while Dawg fans are sick and tired of hearing about next year. I’m not a big fire-Mark Richt guy, but this would be a damaging loss for him. Even if the rumor I hear is true and he’s going to resign at the end of this season and become a missionary, I bet he’d love to stick it to everyone on his way out by winning the SEC East. South Carolina’s quarterback appears to have fallen into a routine of eschewing the pregame meal in favor of a baggie of Super Skunk. Florida’s got Brantley or a true freshman. The East is there for the taking.

This is a matchup of two talented and tough young quarterbacks. Not option quarterbacks or dual-threat quarterbacks or manage-the-game quarterbacks or guys who will play receiver in the NFL, but stand-tall-against-the-rush, set-your-feet-and-fire types. Aaron Murray is going through a semi-rocky adjustment to not having A.J. Green to chuck the rock in the general vicinity of, but he’s the real deal. Tyler Bray, he’s a damn gunslinger. Have you watched him? Dude does not care. And, man, can he sling it. He doesn’t care if he gets hit and he doesn’t care what you consider an ill-advised throw. I saw him whip one against Florida from the far hash to the near sideline with two defensive backs waiting right over there — the ball split them and pretty much knocked the Tennessee receiver out of bounds.

And look here, Georgia. Richt still has a better winning percentage than Vince Dooley. Once he gets below Dooley, you can fire him. Or just sit still and he’ll submit his letter to the AD and move to the Philippines to work for Tim Tebow.

Maine at James Madison — I decided to avert my eyes and point randomly — randomly but gently, for fear of damaging my precious, mysteriously squishy MacBook screen — and fast-track whomever my fingertip landed upon into this week’s Whirl. What an honor! A way to not discuss all the same games everyone else is focusing on — that was the intent. I will not be repeating this egalitarian technique in weeks to come because it turned tout de suite into a research project. I’m no good at research. The following is mostly ripped from Wikipedia.

This Colonial Athletic Association tilt will be held at Bridgeforth Stadium/Zane Showker Field. Zane Showker! I’m calling dibs on that name for the main character of my next novel and I’m not joking. Dibs. The Dukes of James Madison are 4-1, their loss coming at the hands of North Carolina. Scott Norwood went to JMU. The Ace Ventura: Pet Detective character Ray Finkle was loosely based on Norwood, but there’s another movie called Buffalo ’66 with Vincent Gallo and Christina Ricci and I think Jack Nicholson’s ex-wife that captures post-four-time-Super-Bowl-loser depression. Set in winter, of course.

How about Maine, though? The Black Bears. Rudy Vallee went there before he transferred to Yale. Rick Carlisle went there before he transferred to Virginia. Lofa Tatupu went there before he transferred to USC. (The woods of Maine to Tinseltown. Loons to limos. Blackflies to black tie. Two and a half feet of snow to 2½ percent on the back end. Is there a sitcom here? Did I just create a sitcom? Let’s celebrate! Outback on me!) The University of Maine football team once went to the Tangerine Bowl in Orlando and got thumped by East Carolina. More recently it invaded Heinz Field and lost to Pitt only 35-29. They scored twice as many points on Pitt as Notre Dame, and gave up nine fewer points to the Panthers than USF. Maine is the only land-grant university situated on an island, and its fight song, “Stein Song,” is the only college fight song ever to hit no. 1 on the pop charts. Last thing: When you look at the coaches’ profiles on the Maine website, the guys’ phone numbers and e-mails are listed. How’s that for quaint, mammajammas?

Since I’ll be in attendance Saturday, I thought I might be allowed a request. It’s going to be a challenging day for me. I’ll be deafened by the LSU faithful dozens of times, starting when your squad rushes out of the tunnel and rekindling when Spencer Ware and Michael Ford rip off seven straight six-yard runs to set up the deep ball to Rueben Randle and hitting a crescendo when Tyrann Mathieu does whatever incredible shit he’s going to do. (At least while the kid’s in Louisiana, can’t we pronounce it matt-O?) I will be taunted and harassed in the streets of Baton Rouge, by students and grandmothers alike, called every nasty name I’ve ever heard and a few I haven’t. (OK, that part I enjoy. Someone who loves language doesn’t discriminate; I’d take a seminar in cutting-edge slurs as eagerly as a course on Joycean poststructuralism, and when it comes to verbal assault, the Bayou Bengal devotees are tenured professors.) I will have to fly, probably with this cold I’ve just caught. I’ll have to drink away legions of brain cells I desperately need, the type of drinking that’s more a challenge to one’s constitution than a type of fun. I’ll have to eat nine pounds of deep-fried sausage fat. I’ll have to watch my team trot out either the worst Gators quarterback in my memory (I’m 35), or trot out a true freshman.

All I ask, Coach Miles, is that if you must beat us, which you must, can you please use your indomitable mojo to do it? We miss you, Les. The you from seasons past. This year you’re proving to be just another pretty good coach with great talent who wears his opponents down with predictable power on offense and an overwhelming defense, and then salts things away in the fourth quarter. Nothing wrong with that, but it’s a boring mode of football to lose to. We Gator fans saw that last week. That’s Saban’s thing, that eliminate-the-variables-there-will-be-no-fun-for-either-team’s-offense brand of ball.

Remember, Coach Miles, when you beat us by converting those five fourth downs? Well, there was one that appeared short, but whether that was my orange-and-blue-tinted glasses or the officials feared for their lives I can’t now say. Anyway, that was interesting. That wasn’t luck. That was mojo. That was boldness rewarded. And by the way, Coach, I don’t consider going to the national championship game with two losses luck, either. Half the SEC teams that make it to that game need some sort of help. It’s hard to get through this conference unscathed. You need somebody else to lose and allow you to bump up into position. That’s not luck, it’s business. Remember when you avoided losing to Tennessee last year because it couldn’t get its personnel straight? Of course you remember. What a silly question. That wasn’t even luck. In every football game, much of one team’s success is predicated on the shortcomings of the other team. Tennessee just happened to have a shortcoming on what should’ve been the final play of the game. And how about last year at the Swamp, when your holder threw a blind bounce pass and hit the kicker in stride with it? Well, OK, the bounce was luck. That I’ll admit. It was a one-in-a-hundred bounce. But what was not luck was the fact that the Gators’ special teams coach didn’t see a fake coming. You had run that exact same fake against South Carolina not long before. The field goal was longer than 50 yards. Each and every male I was watching the game with was saying, “No way they kick this. No fucking way they kick this football.” So again, plenty of opponent error.

I feel tacky for what I’m doing here, which is demystifying legend. I feel like the bratty kid at the birthday party who ruins the magician’s act, so I’ll just stop here and restate my wishes: Coach, don’t beat us boring. Let us hang around till the last few moments, and then break out your stuff — luck or mojo, I don’t care what it’s called — and let forth a football occurrence that’s unprecedented and highly unlikely that we’ll never forget.